Stoicism is a very relativizing perspective on life. At old age, Verwey made peace with life: he ‘no longer groans for disfavor nor favor’. Dying was inevitable, and did not frighten him. Living according to the stoic doctrine also meant: in harmony with nature. If death came knocking, it might be desirable anyway.

Albert Verwey was born to Jan Verweij, furniture maker, and Wilhelmina Frederika van der Vijgh. His parents passed away at young age: his mother died when Albert was only five, and his father when he was thirteen. During secondary education, he came into contact with Dr. Willem Doorenbos, who taught him Dutch and saw exceptional talent in the boy. Doorenbos introduced young Verwey to the poet Frank van der Goes, one of his former pupils, and via Van der Goes Verwey met Willem Kloos, who set himself up as Verwey’s mentor.

In 1890, Verwey married Kitty van Vloten, who bore him seven children. It was an exceptionally happy marriage. This was not universal in the literary crowd of the late 19th century; various friends of the Verweys, like Frederik van Eeden, were not that lucky in love. Husband and wife settled in Noordwijk, in 1890 still a simple fishing village that had already developed into a seaside resort by 1937, the year Verwey died. Their house, Villa Nuova (unfortunately demolished), stood on top of a dune. Here, they received many contemporaries from home and abroad.

Verwey was an exceptionally fruitful writer. He wrote more than 2,000 poems and also wrote novels, stories and essays. Moreover, he worked as an editor for many magazines. These activities generated so much income that Verwey could provide for his large family and also financially support indigent contemporaries, though modestly. Verwey passed away in his beloved Noordwijk. His wife outlived him by eight years and took care of his literary legacy.

Stoicism is a philosophical school from Ancient Greece which was mainly popular in the Roman Empire. Everything happening in the world is relentlessly fixed according to stoicism, but mankind can find freedom and autonomy in the way he reacts to this and in the fact that he bears responsibility for that. Other than that, life must be accepted as it comes or as it is. According to stoicism, it is important to live in harmony with nature. It is, in short, a very relativizing view on life.

Stoa in the poem

In the poem Stoa, Verwey visualizes this thought very well with the sentences ‘the art of being carried up by waves’ and ‘The inevitability of sinking frightens him not’. After all, the inevitable will arrive anyway. It is crucial to float, float along the flow and accept your fate, even if it is dark and black.

The university in Leiden has been linked with the stoic philosophy by one of its very first professors, Justus Lipsius. He was the driving force behind the spread of neostoicism across Northwestern Europe from the late 16th century onwards. During the Enlightenment, neostoicism has played a very important role in shaping the views in Europe and the emergence of empiricism as the only true way of scientific knowledge acquisition.

Albert Verwey wrote Stoa in 1935 or 1936, shortly before his death. It appeared in the collection In de koorts van het kortstondige (‘In the fever of the fleeting’). The poems in this collection were written as a response to all kinds of current affairs. A recurring theme is resignation: he was at peace with his old age. That resignation seems to be present in Stoa as well. 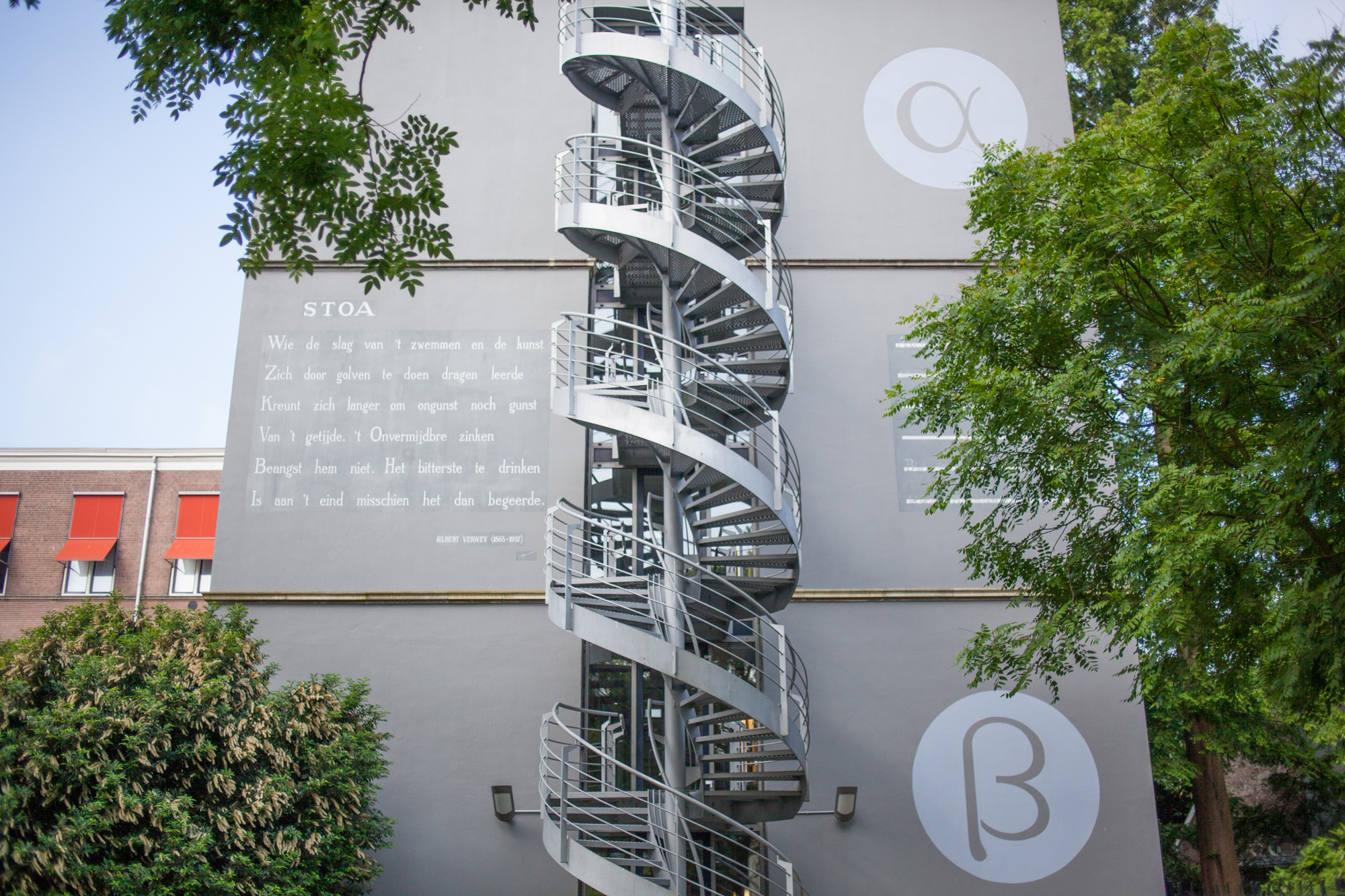 In 1924, Albert Verwey was appointed professor at Leiden University. This appointment did not happen with ease. Although Verwey enjoyed authority, he was not academically educated. He was self-taught, and proud of it too. Johan Huizinga, among others, vehemently opposed the appointment, but the minister of Education persisted. Verwey’s appointment was the start of the tradition in Leiden to appoint to living writers a professorate of Dutch Literature. Nowadays, this tradition takes the shape of an annually rotating visiting authorship.

Verwey has been very important to the university as a poet and professor in Leiden, because he was very sensitive to trends in foreign art movements, which he then brought in at the university. It is therefore very appropriate that the poem has been painted on the garden wall at the back of Rapenburg 70, where the Administration and Central Services of Leiden University is located. The poem offers a nice counterbalance to this. It also looks over the rear of Kloksteeg 25 (currently housing the restaurant Het Prentenkabinet), where Verwey has worked and lived for a while.

This wall poem was realized in 1999 as the 71st wall poem painted by the TEGEN-BEELD Foundation. It was picked by Willem Otterspeer, professor by special appointment of University History at Leiden University. On his choice, he stated: ‘This poem, because of its tight form and timeless content, because of the combination of futility and consolation, because of the concentrated philosophy of life in it, yes, I think it is very beautiful. But I do not know why.’

Note: this poem can be found in the garden of Rapenburg 70, the Executive Office of Leiden University. The garden is publicly accessible during office hours through the main entrance, but can also be accessed through the little alley next to the building (when the gate is open).

Willem Kloos, Verwey’s mentor, was one of the leading lights of the so-called Tachtigers (‘those of the Eighties’) movement. The Tachtigers were opposed to the 19th-century Dutch culture, which they deemed slightly sleepy and bourgeois and rather moralistically motivated. They wanted to create modern art, art that did not have any educational purposes but was art an sich. This required a new language and metaphor and sometimes new words. As a twenty-something, Verwey was a prominent member of this movement that had its peak around 1885. Gorter en Van Eeden, of whom wall poems can be found in Leiden too (Blauw vlamt de lucht [Blue flames the sky] and De waterlelie [The water-lily]), also belonged to the Tachtigers.

Magazines were an important platform during Verwey’s entire life to present himself to the outside world, publish work and preach his views. The Tachtigers had difficulty getting access to De Gids (‘The Guide’), the leading literary magazine, so Kloos, Verwey, Van der Goes and Van Eeden started De Nieuwe Gids (‘The New Guide’) in 1885. However, Verwey left De Nieuwe Gids in 1889 after a heated conflict with Kloos.

In 1904, Verwey started the magazine De Beweging (‘The Movement’). The editorial staff included architect Hendrik Berlage. Subsequently, Verwey contributed to the Beurs van Berlage (a building designed as a commodity exchange and nowadays functioning as a conference center): the caption at the bell tower - Duur uw uur / Beidt uw tijd (‘Last your hour / Bide your time’) - is his, along with several poems. Verwey received an honorary doctorate at the University of Groningen in 1914 because of his contribution to the Beurs van Berlage and other work.

He was a leader and an adviser. The people traveling or writing to Noordwijk and becoming stronger or wiser because of a word elicited from Verwey must have been numerous. But here, the question is appropriate whether the power, the support emanated by Verwey, did come from poetic characteristics. Just like Ulysses, he had seen the cities of many and had met with their minds. He took an interest in individuals, had acquired wisdom and knowledge, and radiated tranquility and security. You did not even think of doubting what he said. Authority came naturally to him.

I can still clearly see our little group before me, sitting at a reading table in one of the rooms of the university library in Leiden. At the top, back to the window: Verwey. The light shone through his white, fuzzy hair, making it glow like an aureole. Every time again it was a surprise and it gave a special sacredness to listening to his words, calm and brimming with worldly wisdom.

He who learned the stroke of swimming
And the art of being carried up by waves
No longer groans for disfavor or favor
Of the tide. The inevitability of sinking
Frightens him not. The most bitter thing to drink
Might be most desired at the end.

This entry was written by Het Taalmuseum in collaboration with Frans Los and Marijke Visch. The translation into English is by Emma Knapper. The following sources were consulted: