Circa 1911, when Herman Gorter wrote this poem, he was already captivated by Socialism. His time was spent conducting lectures, meetings and other political activities. To make some time for writing, Gorter frequently retreated to Bergen aan Zee from 1911 onwards. The poems he wrote there were often of firm socialist beliefs. Blauw vlamt de lucht (Blue flames the sky) is an exception to this. Like in his earlier work, he was inspired by nature. It is a unique poem since there are two versions. Both revolve around longing yet are notably different.

In 1889, Herman Gorter gained national fame thanks to his poem Mei (May), a grand poem of considerable length (4381 lines) of which the first line is arguably the most well-known: “A new spring and a new sound.” In Mei, Gorter expresses his sentiment and observations on nature. This was completely in line with the ideas of the Tachtigers ('those of the Eighties'), a group of young poets from Amsterdam who regarded poetry as the “most individual expression of the most individual emotion.” Herman Gorter, a classical languages scholar, was part of this group.

In 1890, Gorter started teaching at a gymnasium. Since he was rather sensitive and therefore quickly irritated by both his colleagues and students, he tumbled into a spiritual crisis. He sought refuge in philosophy, especially in Spinoza’s work. Gorter translated Spinoza’s Ethics from Latin into Dutch.

From 1897 until his death, the socialist ideals were a central pillar in Gorter’s life. He became a member of the Social-Democratic Labor Party, and subsequently joined the board of the more radical Dutch Communist Party. His poems, which used to be of a philosophical nature, now evidently carried socialist teachings. He conducted lectures and wrote theoretical treaties.

The same, yet different

This poem actually consists of two smaller poems, which resemble each other significantly. The first two lines are identical and the last two only differ slightly differ. The poems can be regarded as two variants of the same poem.

Gorter describes nature in the first two lines. Nature is colorful: “blue flames the sky,” “field and tree bloom green”. The verb vlammen (to flame) is an interesting choice; it seems to fit a fiery-red sunset better than a bright blue sky. Groen (green) in the second line is also peculiar: usually when trees and fields bloom, the most colorful flowers pop up, not leaf-green.

The sigh and the stream

Gorter ends the poem in two ways. In both cases, the stream reflects nature - he probably sees the landscape reflected in the water. The difference lies within the longing. At first, nature only sighs without desiring anything. In the second poem, longing is the central point. For what is being longed and by whom? The poem gives the reader the opportunity for a personal interpretation. Did Gorter witness nature wake from a long hibernation, and was he later struck by the force with which nature renewed itself? Or did he first admire nature’s beauty and did it eventually stir his longing?

The poems published by Herman Gorter circa 1911 usually contain a socialist view on the world. In these years, he actively devoted himself to the socialist cause. This poem is an exception. It resembles his earlier work, in which he often wrote about nature. The poem was written during the period (starting in 1911) when he frequently retreated to Bergen aan Zee to write. Is Blauw vlamt de lucht (Blue flames the sky) inspired by the bright colors at the beaches of Noord-Holland? In any event, Gorter kept the poem to himself; it was printed for the first time a year after his death.

Does this poem hold a special place in your heart? For example, do you remember when you first read the poem? Or did you come across it someplace unexpected? Let us know at muurgedichten@taalmuseum.nl. We would love to add your story to our website. 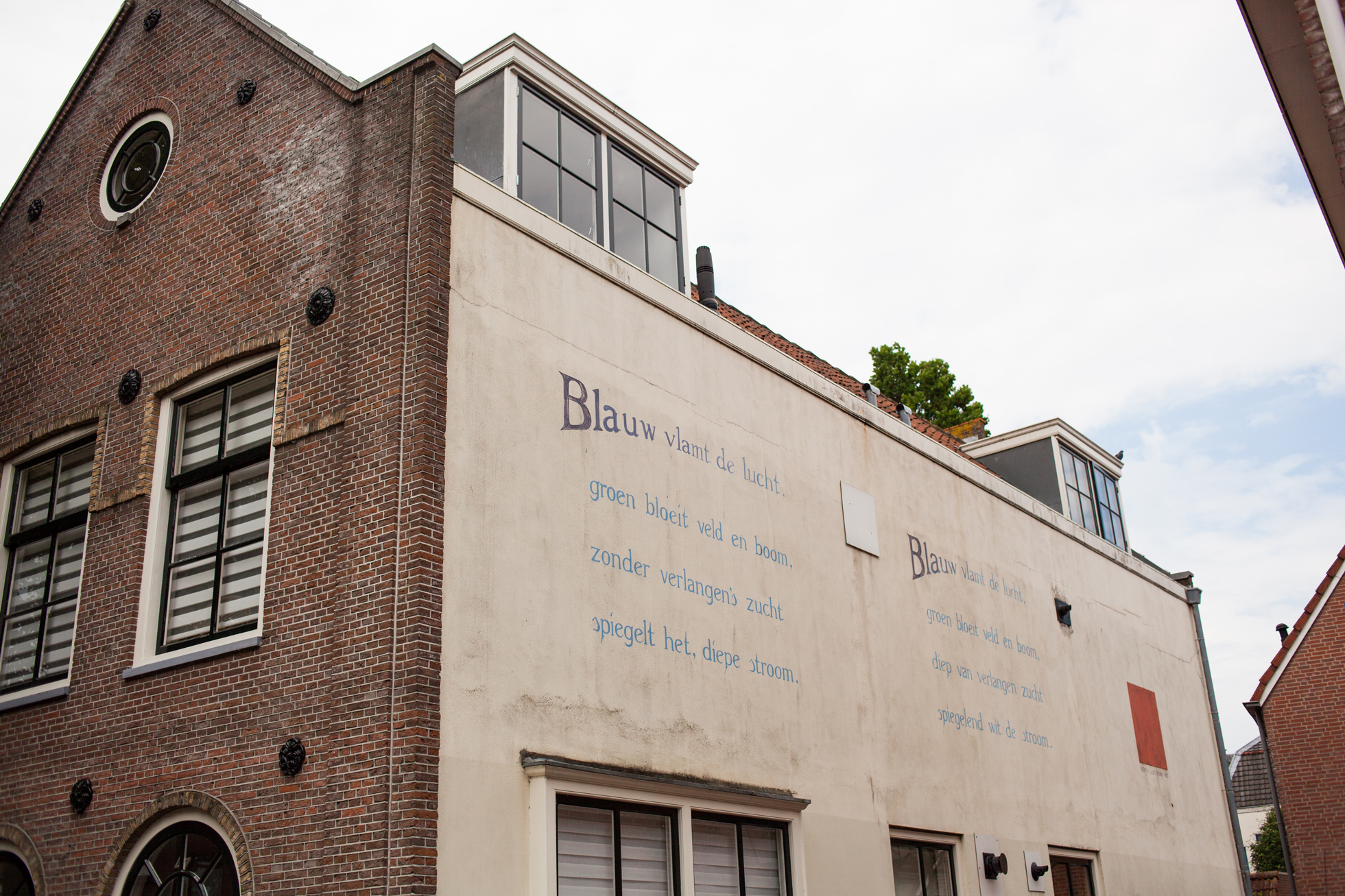 This poem was selected by Jos Damen, head of the department of Library, Documentation & Information of the African Studies Center in Leiden. According to Damen, the poem suits the colorful wall poem project, and it sparks people to wonder what poetry is. Right below the poem, next to the signature of Jan Willem Bruins (a small spider), the signature of Jos Damen can be spotted: a ladybug.

On the occasion of the unveiling of this poem in May 1998, Gorter’s Mei (May) was recited at de Kroonbrug. The recital was, as a relay race, read by renowned and ordinary residents of Leiden. This was the first of the eleven poetry events organised by TEGEN-BEELD Foundation between 1998 and 2013.

Herman Gorter and the Tachtigers

As a twenty-year-old, Herman Gorter was part of the Tachtigers ('those of the Eighties'), a group of young writers and poets who strived for the renewal of art from 1880. They believed that artists should no longer try to make the world a better place, but were to capture their own expressions and impressions. The poem Mei (May, 1889) became iconic for this movement. It expressed pure sentiment and was regarded an example for contemporary poets for a long time.

As the years passed, Gorter’s opinion changed. “Was there no more than that?” he wondered in 1905 with regard to the marked individualistic art of the Tachtigers. “Again and again me, my own direct environment, and no more?” Eventually, a large part of his oeuvre was about being part of some larger entity, which was according to Gorter the core of socialism. However, Mei remained his most famous poem.

With all my heart and soul, I have lived for you, Oh Poetry.

A new spring and a new sound:
I want this to chime as the whistling around,
that I often heard before summer nights fall
In an old town, past the water canal

A reviewer on the poem Mei, which was considered quite lengthy.

Blue flames the sky,
field and tree bloom green,
without a sigh of longing
it mirrors a deep stream

Blue flames the sky,
field and tree bloom green,
a deep sigh of longing
mirroring the white of the stream

This entry was written by Het Taalmuseum in collaboration with Chris Flinterman. The translation into English is by Demi van de Wetering. The following sources were consulted: