Frederik van Eeden was fascinated by water lilies. The flowers frequently occur in his poetry, adorn the covers of his works and Van Eeden even named his house after one. The reason why the water lily was so dear to him was because he recognized perfection, peace, and purity in the flower. It was the water lily that taught Van Eeden how to achieve this, which was not by restlessly undertaking new activities like he often did. Imperturbable, the stalk of the water lily arises from the mud. For Van Eeden, this was of symbolic significance: peace and purity are achieved from within, through reflection and meditation.

Want to know more? On this website you can listen to the poem, discover its author and find out what the poem means to the people of Leiden.

Psychiatrist, poet, writer and good Samaritan: Frederik van Eeden was it all. Since the late nineteenth century, Van Eeden was part of the intellectual elite in the Netherlands. He often found his inspiration abroad. In France, he became familiar with psychotherapy and in England, he learned about socialism. His love for nature, art and science is rooted in his youth.

While he studied medicine, Van Eeden had already become a known writer. He was editor of several leading journals in which he published essays, fiction and poetry. These works were often published as a novel or poetry collection later on. When he started working as a psychiatrist, he kept on writing and publishing his works.

As a student, Frederik van Eeden became a part of de Tachtigers: a group of young writers in the nineteenth century who opposed literature and poetry of previous generations. Eventually, he went in a direction of his own. He founded the self-sustaining community Walden, which was inspired by Henry Thoreau’s eponymous novel, and became fascinated by spirituality and religion. Even contemporaries perceived Van Eeden as eccentric and unworldly.

Click here to watch moving image of Van Eeden, two years before his death in 1932

In De waterlelie (The water-lily), Frederik van Eeden describes his quest for perfection. In the writing process, he probably thought about the perfect, flawless relationship with women. However, there are critics who posit that the water lily symbolizes the soul and that the poem is about personal development. The lesson within the poem at least is clear: perfection comes about by ridding itself of the mud, in other words, desires, passions and urges. This is an internal struggle.

It is telling that this poem eventually was printed in the poetry collection Van de passieloze lelie ('Of the passion-less lily', 1901). According to Van Eeden, perfection was ‘without passion’, controlled. He was inspired by Eastern philosophies such as Buddhism, which states that all suffering originates from desire and that one can transcend through self-knowledge.

In 1886, after his graduation, Frederik van Eeden married Martha van Vloten and settled as a psychiatrist in Bussem. Around this time he repeatedly wrote about water lilies, which caused this to be dubbed as his “water lily-period”. It is likely that he wrote this poem following his review of the novel Een liefde ('A love') by Lodewijk van Deyssel was written. According to Van Eeden, Van Deyssel was too crude about sex. Love, reasoned Van Eeden was not about ‘low’ urges such as sex and passion, but the ‘higher’ ones. He explained this by drawing a comparison between this and the water lily:

‘You know the large white water-lily, do you not? If I lay at the bank and look at them - then I know that they have risen from the cool dark of the pond, searching for light. Now if someone goes to these flowers in order to own them - and he grasps them at the stalks in the water, and he pulls them towards himself, it causes them to break with a soft snap - and a long, brown stalk will appear, slack, wet and numb, - then it strikes me as if I saw a sweet, pure woman pull a long intestine from her fair body.’

An early version of this poem can be found in the margin of the play Winfried which Van Eeden was working on in 1887. In the plot, a benefactor helps a prostitute as she ‘rises from the mud’ and becomes respectable again. Van Eeden based the tale on his own experience, as he had helped a prostitute get her life back on track in Paris. The poem originates from a period in which Frederik van Eeden wondered about his relation to women and sex. 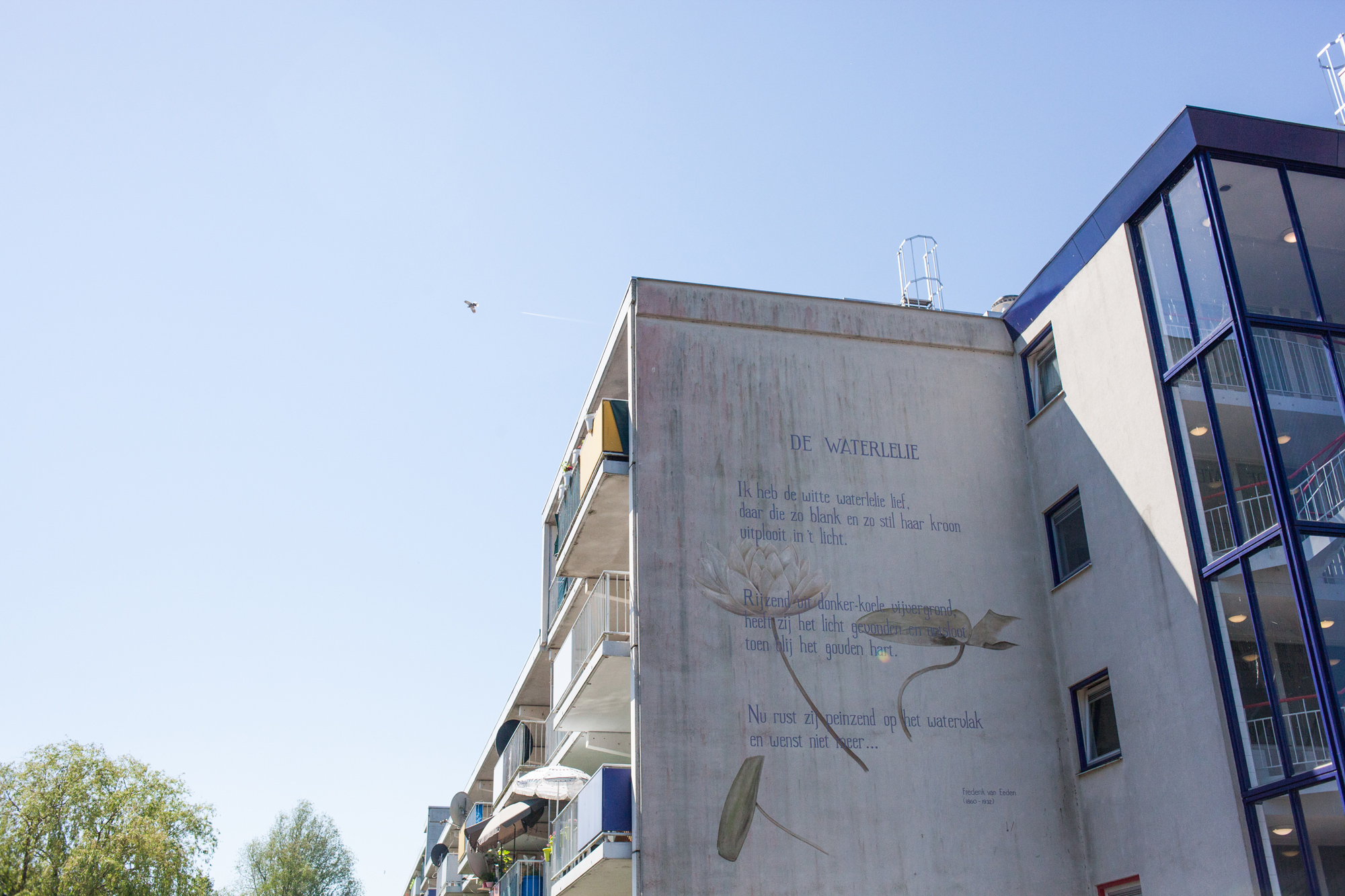 De waterlelie (The water-lily) can be found on Valkenhorst since 1994. This wall poem was the first to be painted on top of an illustration. “We’ve added a lily since the wall was immense and the poem only contains a few lines”, said Jan Willem Bruins, who had painted the poem on the wall. Unfortunately, a word is missing in the second line. Between the words; “blank” and “en”, the word “is” is missing. This has not yet been fixed because the flat upon which the poem is painted is rather tall. In 2000, this poem became the source of inspiration for four other poems in this area (the Slaaghwijk).

In 1951, a Leiden street was named after him: Frederik van Eedenstraat. Around that period, national appreciation grew for Van Eeden and several streets in the Netherlands were named after him.

Frederik van Eeden and the Tachtigers

During his student days, Frederik van Eeden was part of the Tachtigers ('those of the Eighties'), a group of young writers and poets. The group opposed previous generations, who believed that art had to contribute to society. For example, literature was supposed to encourage the solidarity or inspire to living a virtuous life. The Tachtigers pleaded for “art for art’s sake”; art did not have to be useful.

Frederik van Eeden was editor of De Nieuwe Gids ('The New Guide'), the magazine of the Tachtigers but after his studies, he chose to go in a different direction. His former kindred spirits maintained that art was something personal. Willem Kloos, who was also part of the Tachtigers, pleaded once that literature was “the most individual expression of the most individual emotion.” Van Eeden actually continuously searched for that which connected people. At a later age, he joined the Catholic Church.

I love the white, white water-lily,
it is so pale, its crown unfolds
so quietly in the light.

Rising from the cool dark of the pond,
it has found the light and opened up
its golden heart with joy.

Now, lost in thought, it rests on the surface,
its longing gone...

This entry was written by Het Taalmuseum. The translation into English is by Demi van de Wetering. The following sources were consulted: