The Dutch, the Japanese, the nationalists in Indonesia: as the war raged in 1943, they all emphasized the importance of unity. That same year, Chairil Anwar wrote a poem in which he expressed the importance of freedom and individualism. The title still needed to be changed in order to be publishable, but soon the poem turned out to appeal to many people. The fighting spirit and indomitability in this poem still fires one’s imagination. Aku is a universal poem: everyone can recognize themselves in this plea for indomitability.

Chairil Anwar was the son of a former regent of Indragiri Hulu, Sumatra. His family was well off and he could enroll in many study programs, but finished none. In 1941, when he was 19 years old, his parents separated and together with his mother, he moved to Batavia (Jakarta), Java. There, he developed into a writer and a poet.

In March 1942, Japan occupied the then Dutch East Indies. The Dutch were confined; the Indonesian nationalism was spurred on. Intellectuals who had earlier enjoyed European education, now sought to support their own culture. Chairil Anwar was one of the poets of this movement, but he also went his own way. He was known to be a lone wolf, a womanizer and a bohemian.

Chairil Anwar wrote over 90 stories and poems in total. During the occupation, a part was published on cheap paper and reappeared after 1945. He married one year later, but divorced again in 1948. Within a year after his divorce, he passed away in a hospital in Jakarta. He was honored as a cultural flagship in the young Indonesian Republic: he was depicted on a stamp and the date of his death was later declared to be the National Literature day.

Anwar’s poems are known as being open to interpretation. When he wrote this poem in 1943, some people saw the resistance against Dutch colonialism in it, others that against Japanese imperialism. Later, it has also been interpreted as a protest against oppression in general.

What meaning did the poem have to Anwar himself? His life was that of a stubborn rebel who expressly wanted to choose his own way. From that perspective, individualism attracts attention: it is about an ‘I’, a ‘wild animal’ that chooses his own path, even if it goes hand in hand with struggle and confrontation. Even now, readers are impressed by the energy, power and vitality the poem expresses.

After Indonesia became independent between 1945 and 1949, this poem grew to be Anwar’s best-known work. It became an icon of the fight for independence, because of its subject matter and fighting spirit and because it was not written in standard Malay, but in Indonesian.

Chairil Anwar wrote this poem when he was 21 years old. He had only lived in Batavia (Jakarta) for a short period of time. After centuries of Dutch colonialism, suddenly the Japanese were in charge. They justified their presence by pointing out the importance of Asian unity. Indonesian nationalists, who had been actively suppressed by the Dutch, now enjoyed more freedom. They were the ones that valued Indonesian unity so much. What is striking about this poem is that everyone could recognize their own opinion in it, and at the same time it was radical because of the individualism it expressed. 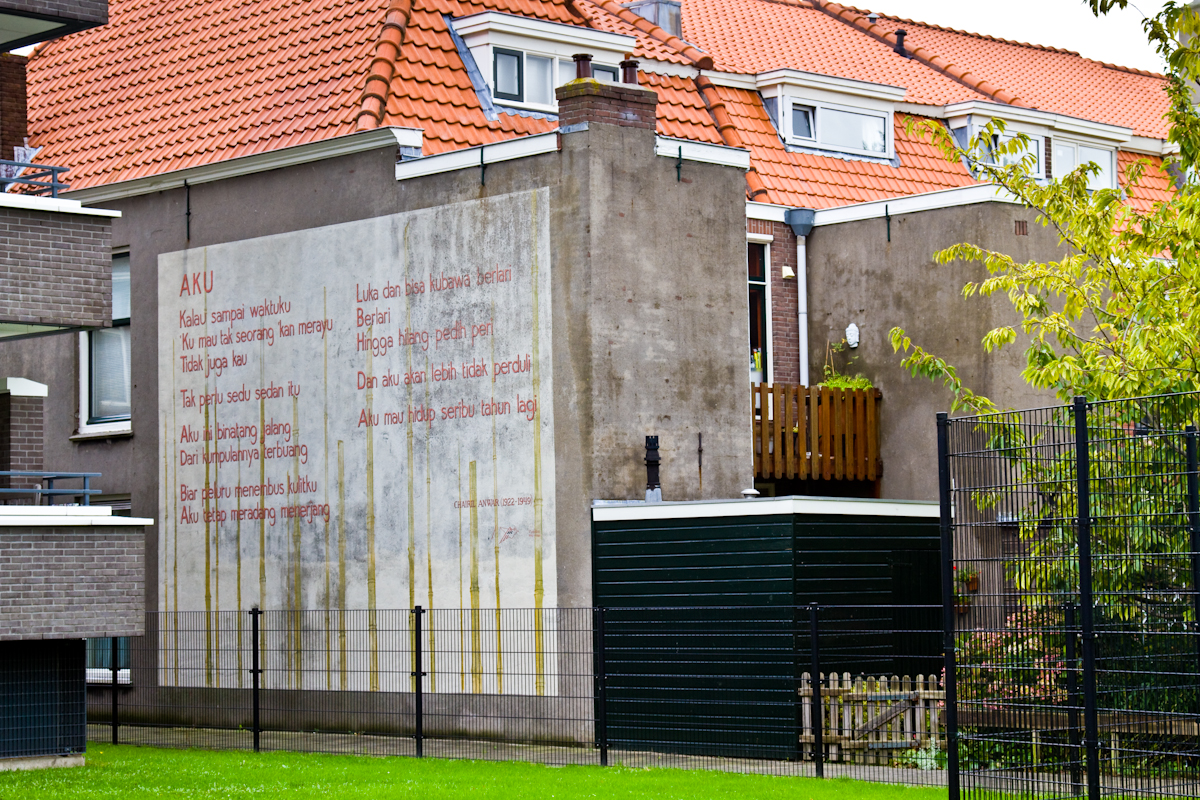 This wall poem was unveiled on 17 August 1995, on the 50st birthday of Indonesian independence. The poem was proposed by the Instituut Indonesische Cursussen (‘Institution for Indonesian Courses’). The Dutch translation of this poem is by the hand of Hans Teeuw (1921 - 2012), who was affiliated with Leiden University as professor of language and literature in Malay and Bahasa Indonesia.

The way in which the poem is painted is strongly related to the content: the bamboo sticks look like prison bars. At the time of the unveiling, the fence in front of the poem still had barbed wire, which added to the image of war and imprisonment. Back then, the wall poem could be seen from the Burggravenlaan, but apartments have now been built on the intermediate pieces of land.

Anwar was lean, pale and seems disheveled. His eyes were red, somewhat wild, but always as if deep in thought. He moved as someone who does not care

No need for those sobs and cries

I am but a wild animal
Cut from its kind

And I should care even less

I want to live for another thousand years

This entry was written by Het Taalmuseum in collaboration with Cindy Smits. The translation into English is by Jasmijn van Dongen. The following sources were consulted: