Hendrik Marsman wrote this poem in his early twenties after a visit to Berlin. It is a tribute to the expressionist poet Georg Trakl, whose lines are quoted at the beginning of this poem. Following by example of Trakl, Marsman engaged with the people and the universe. Despite the infinity of the universe, the light of the stars connects us all.

Hendrik (‘Hennie’) Marsman was born in 1899 as the son of a bookseller and a schoolteacher. His first poetry collection Verzen (Verses) was published in 1923, which also includes the poem Val (Fall).

Four years after his debut, Marsman released one of his best-known poetry collections, Paradise Regained, in which he pleads for a fervent and dangerous life. This ‘vitalism’ contrasted sharply with his own life, as afflictions such as epilepsy and depression seriously impaired his (mental) health. After a depressive episode, Marsman found himself to be a demon for work and wrote numerous poems, essays on his time, contemporaries and translations.

Marsman’s poetry is no longer widely read, but his Herinnering aan Holland (Remembrance of Holland, 1936) - “thinking of Holland, I see wide rivers running slowly through endless lowlands” - is still one of the most famous Dutch poems. Marsman wrote Herinnering aan Holland in the year he permanently moved abroad, where he felt liberated from Calvinism and narrow-mindedness. When he fled France at the start of World War II, his vessel exploded and only his wife survived.

Are you interested in more poems written by Marsman? His Collected works, which includes Val (Fall) and Herinnering aan Holland (Remembrance of Holland), can be read online.

The poem begins with a motto in German: “Ich falle nach Venedig hinunter / und so weiter - bis zu den Sternen” (I’m dropping down to Venice / and further - to the stars). It is taken from a letter from Georg Trakl, a German expressionist. The motto contains an extraordinary image: the water in the canals, and perhaps the renowned Venetian glass, reflecting the light of the stars. Even when the starlight touches the earth, it lives on. Marsman explored this idea in the poem Val (Fall).

In this poem, Marsman describes the falling of a star. The falling seems never-ending, “universe after universe” the “shining tendril” falls. Stone, beast, plant: will these things perish while the star continues to fall? Without touching something (“groundless”), the star is falling straight down. But it does not fizzle out because there is a hatch, and after that “boat / star / vale”. The light is reflected on the water, the same image Trakl used in the quote. Marsman seems to have added the crate which is caused by the falling star. Or is it actually the light shining through underwater?

Distance in time and space

Did Marsman simply describe the falling star, or did it also symbolize something? Some readers discovered a metaphor in the image of a star that drops down dead yet continues to exist. Perhaps Marsman alluded to Georg Trakl, who passed away in 1914 but still lived on. Unfortunately, Marsman never expressed his opinion on this.

In 1922, when he was in his early twenties, Marsman visited Berlin and Paris. In these cities, artists were experimenting with new art forms which were not about perceptible reality, but about new ways of seeing, experiencing and expressing. Emotion and expressions were the main focus. The young poet took in all the impressions and information, and was eager to continue his writings when he had arrived home.

Expressionism in the polder

Val (Fall) was written in Zeist during the winter months of 1922, and is probably one of the few true expressionist or cubist poems in Dutch. Marsman was strongly influenced by the German poet Georg Trakl (1887 - 1914), who often considered the relation between man and the universe in his work. Trakl also experimented with typography and isolated words.

Fall by Marsman contrasts ominously with the wall of the building at Zoeterwoudsesingel 42. Like angry thunderclouds in a grey of sky. The original owner of the building has passed away. In his will, he designated his house to be a student house, on the condition that it would remain unchanged. The house is currently occupied by three foreign students. They know nothing about Marsman’s fall from heaven. The view of the world from Leiden is vast enough for them. Emily Stanbury is in a bit of a hurry. She has to get to class. Afterwards, she will work out and then have dinner with her housemates. She might work on her thesis, later. Above Marsman’s thunderclouds, the sun shines in a blue sky. The landlord is dead. Marsman is dead. Emily leaves in a hurry. Very much alive. 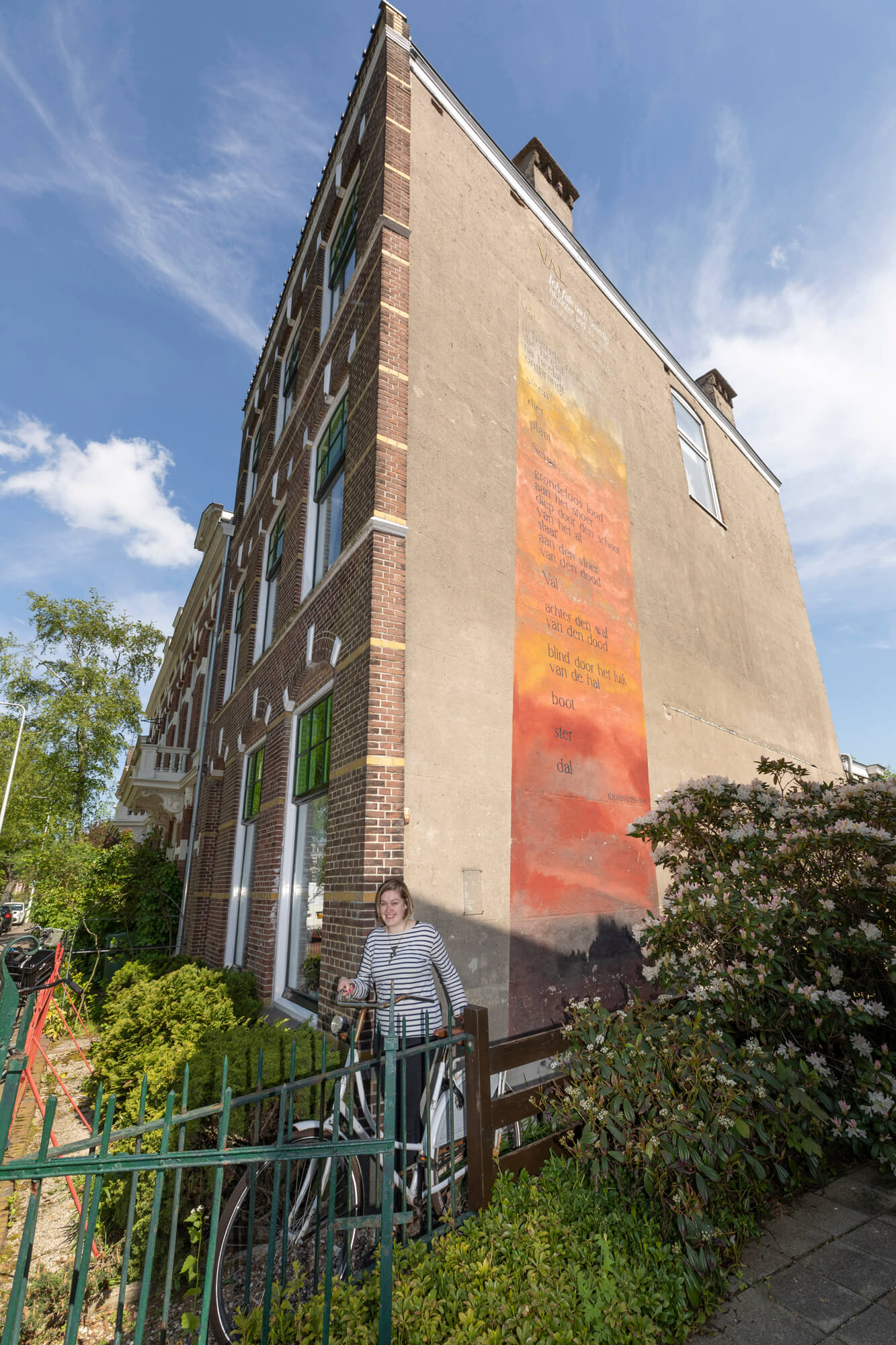 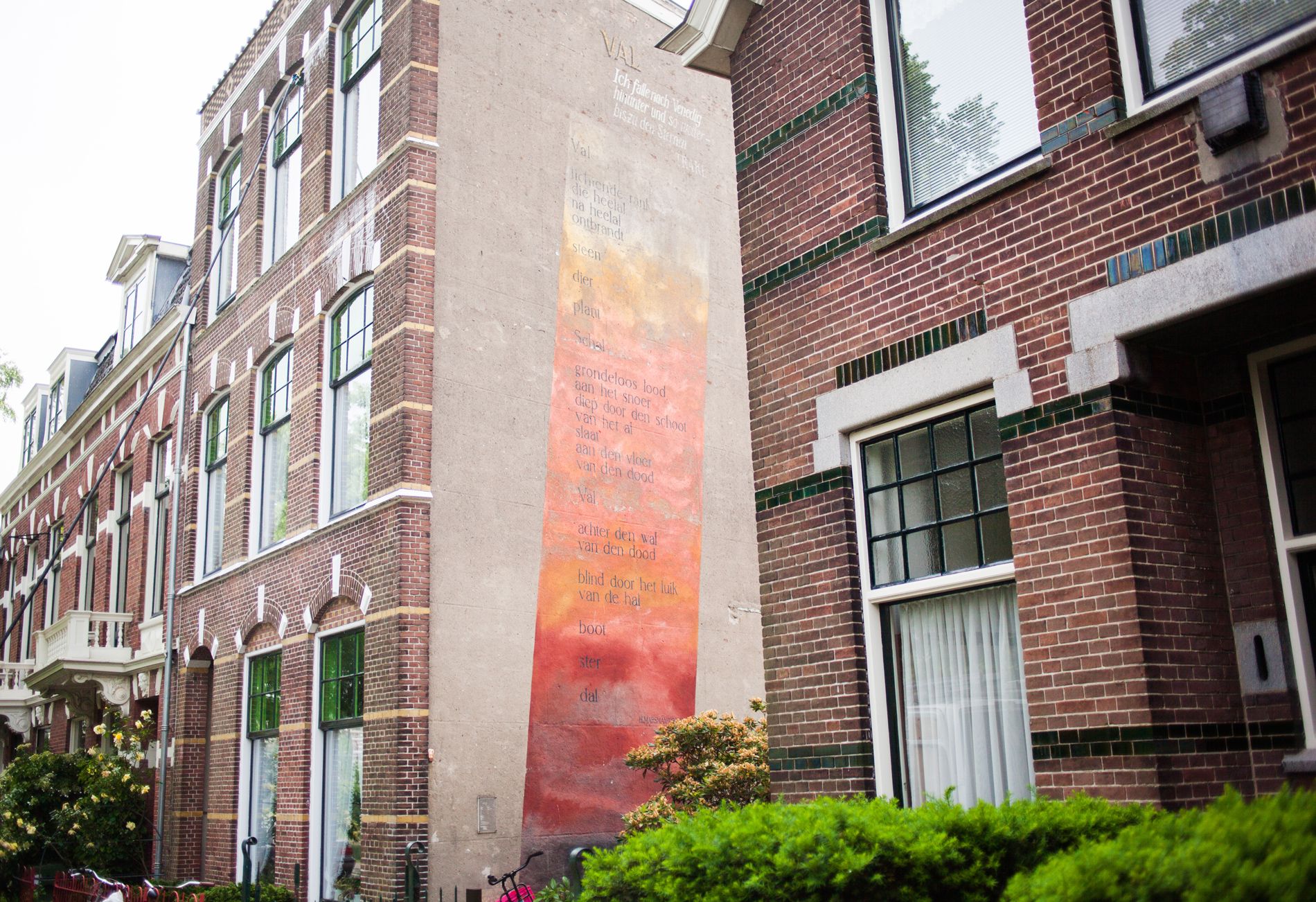 This wall poem was realized in 1994. The falling of the star is also reflected in the design of the poem. The colors become darker as the words ‘fall’ straight down with an increasing distance, which can be seen in the combination of “stone / beast / plant.” The distance between these three words is much larger than in other lines.

Marsman wrote Val (Fall) for his first poetry collection. In every poem, he conveyed his feelings around a particular topic; he dedicated other poems to cities such as Berlin. In 2012, the Dutch embassy in Berlin commissioned the realization of this wall poem in honor of the 775th anniversary of the city. Unfortunately, due to new housing development the poem is no longer visible.

I want a life, grand and compelling!

Hendrik Marsman summarizes his vitalism in the first line of the poem De grijsaard en de jongeling (The gray-beard and the young man). You can read the entire poem here.

The true artist discovers, even in the very mundane, the unusual, the extraordinary, the essential-living.

Marsman in an essay on art.

shining tendril
that flares
in universe
after universe

behind the wall
of death

blindly through the trapdoor
of the hall

This entry was written by Taalmuseum in collaboration with Chris Flinterman. The translation into English is by Rianne Koene. The following publications were consulted: