Listen to this poem in French.
Voiced by: Naomi Nota

Charles Baudelaire was prototypical for ‘the poet’ like we imagine him. An extravagant dandy who squandered half of the fortune his deceased father left him within two years. Many short-lived affairs, a melancholy feeling for life, and most of all misunderstood - the collection that nowadays is his best-known one, Les Fleurs du Mal (The Flowers of Evil), was a merciless flop. That collection included this poem about a woman passing by at the street and with a single look, instilling a feeling in the narrator that a love has been lost, because they do not know each other and will move on along their own paths.

Charles Baudelaire was already occupied with art when he was only a child. His father was fond of painting and let him help. However, when Baudelaire was six years old, his father died. After 18 months, his mother remarried a professional soldier who would later become a general officer.

Charles did well at secondary school. He got high marks and wrote his first poems. Still, his teachers worried about him, because he suffered from melancholy moods, was very introverted and was not disciplined at all. The latter led to him being expelled after a trivial incident. He graduated elsewhere and began studying law. At least, that was the case on paper: in reality, he could more often be found in the Quartier Latin where he lived a free life. This was also the place where he would contract the syphilis that would later kill him.

His stepfather decided to send him off to India in hopes that the journey would put him back on the right track. However, Baudelaire left the ship in Mauritius in order to return to France. He was full of impressions and inspiration. Back in France, his father’s inheritance was released, a rather large fortune which enabled him to live his life as an extravagant dandy. Within two years, he squandered half of the fortune, leading to his wings being clipped by his family. His melancholy moods returned.

Life as a writer

Baudelaire gained great fame with his French translations of Edgar Allan Poe, an American author in whose work and life he saw many resemblance. His own work, however, did not quite catch on. Les Fleurs du Mal (The Flowers of Evil), nowadays his best-known collection, was a merciless flop. After briefly living in Belgium, 46-year-old Baudelaire passed away in Paris from the effects of syphilis.

This sonnet of Baudelaire’s describes an extraordinary street scene. A man is standing on the street, surrounded by traffic noise. He sees a woman passing him by. She is tall, slender and in mourning. And in spite of (or because of?) the sorrow lingering around her, she is beautiful. It is described in detail how she passes, how she makes the hem of her robe dance while she walks past. The narrator is fascinated by her and is rooted to the spot.

And then it happens. Their eyes meet, and for a brief moment they look into each other’s eyes, like a lightning bolt lights up the night for a second. It is only a brief moment, afterwards the situation is normal again. But it is enough to change something in the narrator. In fact, the look has changed his life, has let him be born again. Immediately, however, he knows that it will probably never be more than this moment. Only in passing, in the brief glance, they were together, but the woman continues on her way. This leaves the narrator with the question if they will meet again in eternity, a Romantic concept where the impossible is possible and therefore the only place where this impossible love can be fulfilled.

The narrator is left behind in despair, not knowing where or when they will meet again, if that will ever happen at all. They do not know anything about each other, they do not know where the other is going, what their name is, who they are - but still, one thing has become clear in the fleeting moment their eyes met: the narrator could have fallen in love with the woman passing him by, and he is sure that she knew.

In 1861, the second edition of Les Fleurs du Mal (The Flowers of Evil) was published, in which Baudelaire included the poem À une passante. This collection consists of six parts that all have a theme, uncommon at the time. This had a purpose: according to Baudelaire, the poems could only be understood correctly in combination with the other poems. This poem can be found in the second section, Tableaux parisiens (Parisian scenes). This series describes a day in the city of Paris, following a narrator strolling around town. 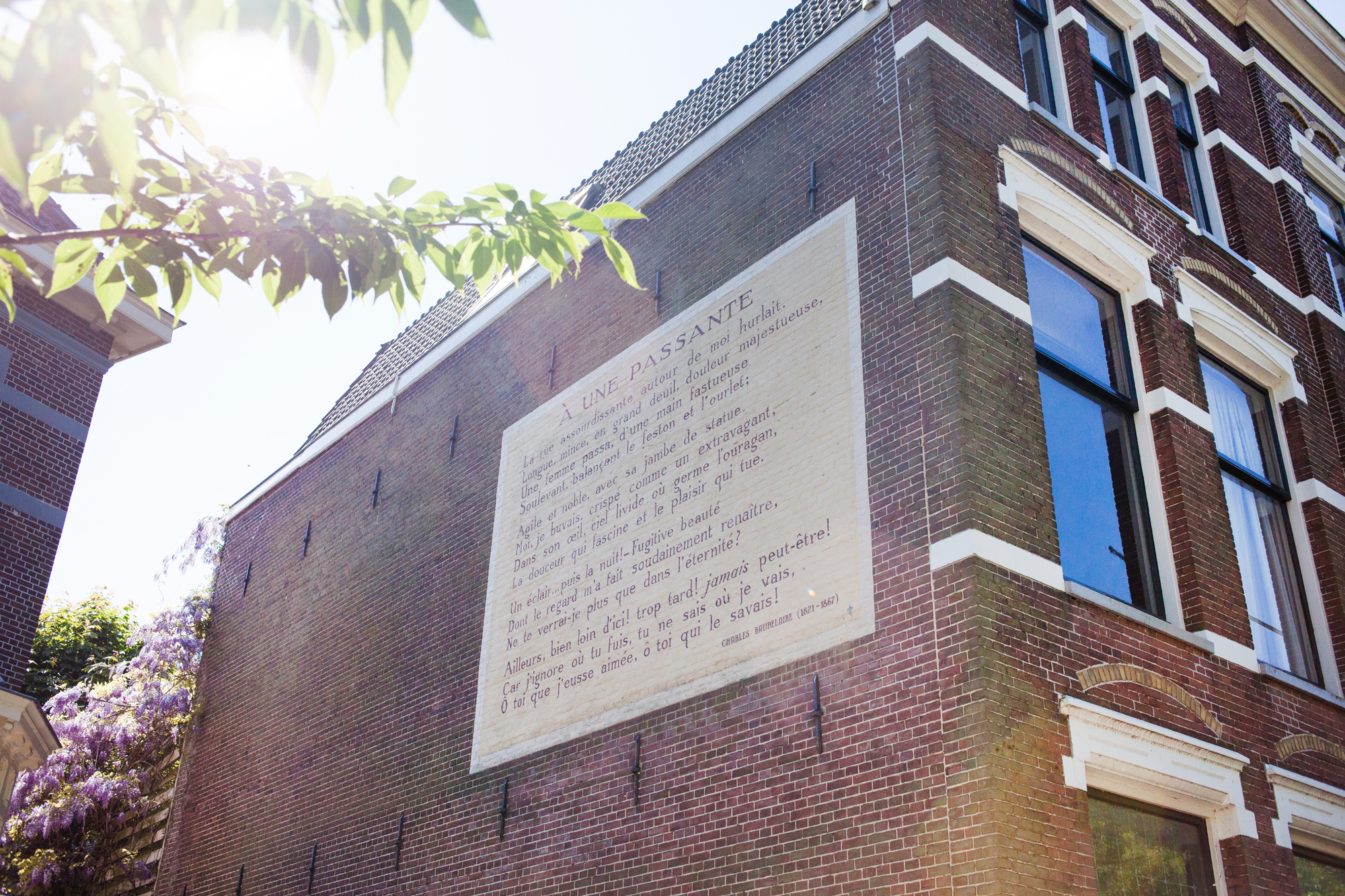 This wall poem can be found at Zoeterwoudsesingel 55 in Leiden since April 2003. It was the 87th wall poem that was realized by the TEGEN-BEELD Foundation. The poem was suggested by Leo van Maris, who was a lecturer in French at Leiden University and also works as a translator. He suggested it because there was not yet a poem of Charles Baudelaire’s to be found in Leiden, which was odd because he was one of France’s biggest authors. Moreover, the poem is extra special because it is about potential love between passers-by. This could happen to anyone passing by the poem as well. The poem was also suggested by Hetty Leijdekkers of the TEGEN-BEELD Foundation. Her signature, the blue fleur-de-lis, can be spotted below the poem.

What is love? The need of coming out of one's self.

Life is finite, sorrow is not.

The traffic roared around me, deafening!
Tall, slender, in mourning - noble grief -
a woman passed, and with a jewelled hand
gathered up her black embroidered hem;

stately yet lithe, as if a statue walked . . .
And trembling like a fool, I drank from eyes
as ashen as the clouds before a gale
the grace that beckons and the joy that kills.

Lightening . . . then darkness! Lovely fugitive
whose glance has brought me back to life! But where
is life - not this side of eternity?

Elsewhere! Too far, too late, or never at all!
Of me you know nothing, I nothing of you - you
whom I might have loved and who knew that too!

This entry was written by Het Taalmuseum in collaboration with Chris Flinterman. The translation into English is by Emma Knapper. The following sources were consulted: