Verlangen is: wonen in deining

Listen to this poem in German.
Voiced by: Lea Grüter

Rilke is known as ‘the poet of the Sehnsucht’, hopeless yearning. He owed his reputation to poems such as this one, in which he caught this emotion. Sehnsucht feels like living in turmoil, like loneliness and timelessness, like life itself.

Rainer Maria Rilke was born in Prague as René Rilke. The previous year, his sister had died shortly after birth and his grieving mother therefore raised him as a girl until he was six. His parents separated when he was nine years old and sent him to a military academy in Austria. Sensitive René felt like he did not belong and dropped out of school. He received private education and afterwards studied literature, art history and philosophy in Prague and Munich. During his studies, he changed his name into Rainer, because it sounded more masculine and German, and it symbolized him parting from his family.

For three years, Rilke had an intense love relationship with Lou Salomé, a married, fifteen years older Russian-German philosopher, psychoanalyst and writer. Psychiatrist Sigmund Freud, Lou’s supervisor, wrote about her that ‘she was both muse and caring mother to the great poet Rainer Maria Rilke, who was helplessly navigating through life.’ In 1901, Rilke married sculptress Clara Westhoff and in that same year, their daughter Ruth was born. However, not much later he left his family and set out to Paris.

‘There is so much more reality in a poem I created than I feel in any relationship or affection’, Rilke wrote in 1903. ‘Where I work, I am true and I would like to find the strength to found my entire life on that truth.’ For him, writing novels and poems meant fleeing from reality. For years, Rilke led a roaming life in Germany, Russia, Italy, France and Switzerland, where he died of leukemia.

This poem is about Sehnsucht, a nearly untranslatable term that comes down to such an intense yearning for something that one can speak of suffering. This poem clarifies what Sehnsucht feels like: as if you are continuously thrown back and forth and you never feel at home. It is a feeling of loneliness that seems to last forever and is omnipresent.

In 1899, Rilke’s collection Mir zur Feier appeared, the first in which all poems were about emotion. For every poem, he accurately stated the date and place of writing. This poem was created on 3 November 1897 in Berlin-Wilmersdorf, when Rilke was 22 years old. It was the first poem of the collection. At that time, it did not have the title Das ist die Sehnsucht, but it was the motto found at the beginning of the collection. With this, Rilke made clear that this poem represented the attitude towards life that would reappear throughout the entire collection: Sehnsucht. 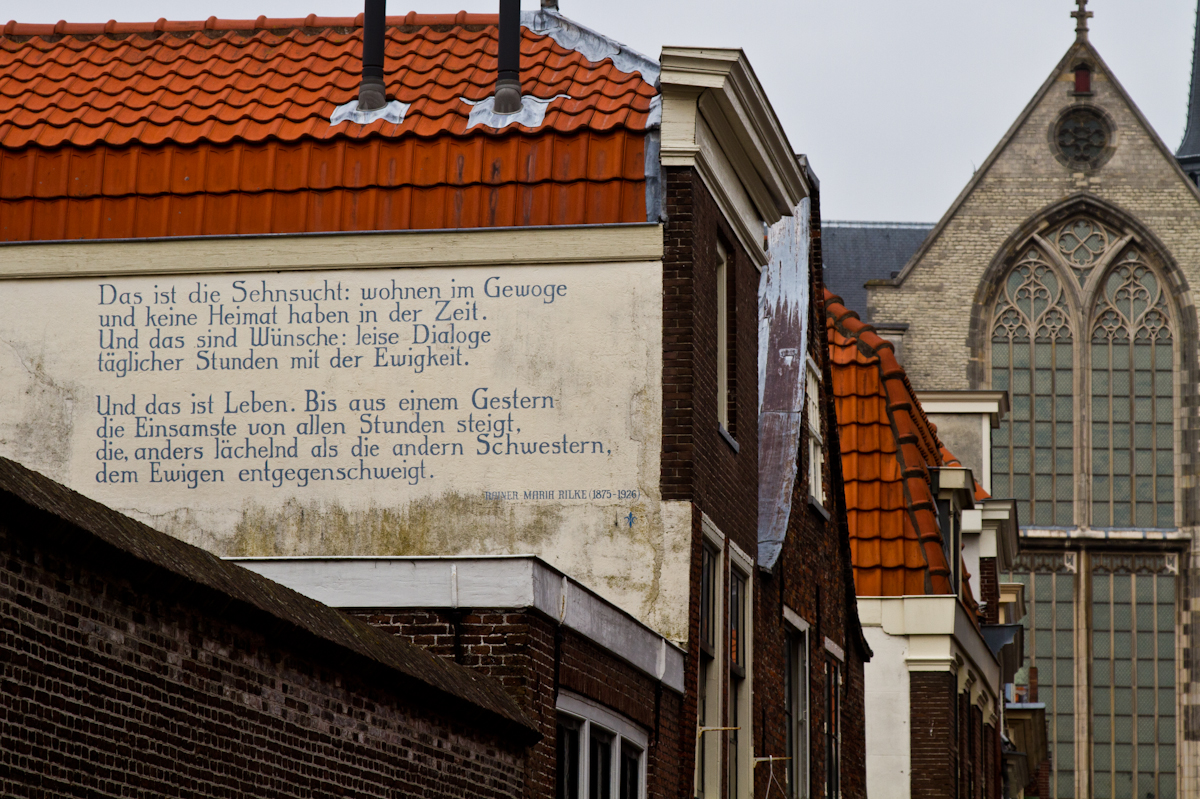 This wall poem can be found at Herensteeg 39 in Leiden since 1993. It was the 11th wall poem that was realized by the TEGEN-BEELD Foundation. In 1999, it disappeared for a short period of time, because the facade needed to be renovated. Afterwards, it was repainted.

I find this to be the most eminent duty of a bond between two people: each protects the loneliness of the other

That is longing: living in turmoil

That is longing: living in turmoil
and having no home in time
and those are wishes: gentle dialogs
of day's hours with eternity

And that is life. Until out of a yesterday
the most lonely hour rises
which, smiling differently than the other sisters (hours)
silently encounters eternity

This entry was written by Het Taalmuseum in collaboration with Saskia Kanij. The translation into English is by Jasmijn van Dongen. The following sources were consulted: