Is French your mother tongue and would you like to recite this poem? Please contact us at muurgedichten@taalmuseum.nl!

The young Paul Verlaine wasn’t the most cheerful of people. The poetry he wrote in high school, including Chanson d’automne (Autumn song), is gloomy and wistful. The fall landscape, created in only a few lines, reflects Verlaine’s mood: bleak and melancholic. It wasn’t just him going through puberty. His entire life, he was tormented by depressive thoughts and sought refuge in liquor and love. In this poem, he describes how he moved through life: like a leaf, riding high and low winds.

Paul Verlaine started writing poetry at a young age and at fourteen he sent the poem La Mort ('The Death') to Victor Hugo, the then icon of French literature. The tone of his oeuvre was set: Verlaine was melancholy and a defeatist. This could quickly turn into a depression, for example when his father and cousin died shortly after one another. Verlaine sought comfort in spirits such as absinthe and was often drunk and violent for long periods of time.

In 1870, Paul Verlaine married the seventeen-year-old Mathilde Mauté and a year later their son was born. Verlaine was already a well-known poet when a young ambitious fellow artist, Arthur Rimbaud, sent him several poems for review. He was so impressed that he left his wife and started living with Rimbaud. Their openly homosexual relationship sparked controversy and the couple moved to London and later to Brussels. When Verlaine shot Rimbaud in the wrist during a fight that got out of control, Verlaine was sent to prison in Belgium for two years.

After his release, Verlaine was determined to better his life. He found a job as a teacher but when he got involved with Lucien, one of his students, he had to escape to England once again. The couple returned to Paris several years later. When Lucien died shortly after, Verlaine again reached for the bottle of absinthe. He lived as a clochard after his mother’s death in 1886. Sometimes he spent the night in hospitals or with prostitutes, but more often on the street.

It was in poetry that Verlaine found a place for his feelings and thoughts. Toward the end of his life, his poems were more and more appreciated. His life story also appealed to the public. When he died at the age of 52, thousands of admirers came to his funeral to bid farewell to the bohemian.

In Chanson d’automne (Autumn song), Verlaine wrote about the feelings that fall evoked. Nature prepares itself for winter; trees shed their leaves. It makes Verlaine realize that everything is transient. This is the depressing thought that “wounded his heart”. He feels powerless like a dead leaf that drifts on the wind.

Years later, Verlaine wrote in Art poétique (The art of poetry) that poethood was, above all, about music. Poetry had to be like music and give expression to emotions. In Chanson d’automne Verlaine definitely displays this. Not only does he use words related to music, like the playing violins, but sound and rhythm also make this poem resemble a song. This is not a coincidence; after all, the poem is called chanson d’automne, song of autumn.

In 1866, when Paul Verlaine was 22 years old, he published his first poetry collection: Poèmes saturniens (Poems under Saturn). In these poems, he sought an explanation for his melancholic way of living. The answer is in the title: the influence of the planet Saturn. Simply put: he was born under a poor constellation and was thus doomed to a life of gloominess. Part of this collection is the series Paysage Tristes (Sad Landscapes) which includes Chanson d’automne (Autumn song). Like the other poems in the collection, Verlaine wrote these while still in high school. 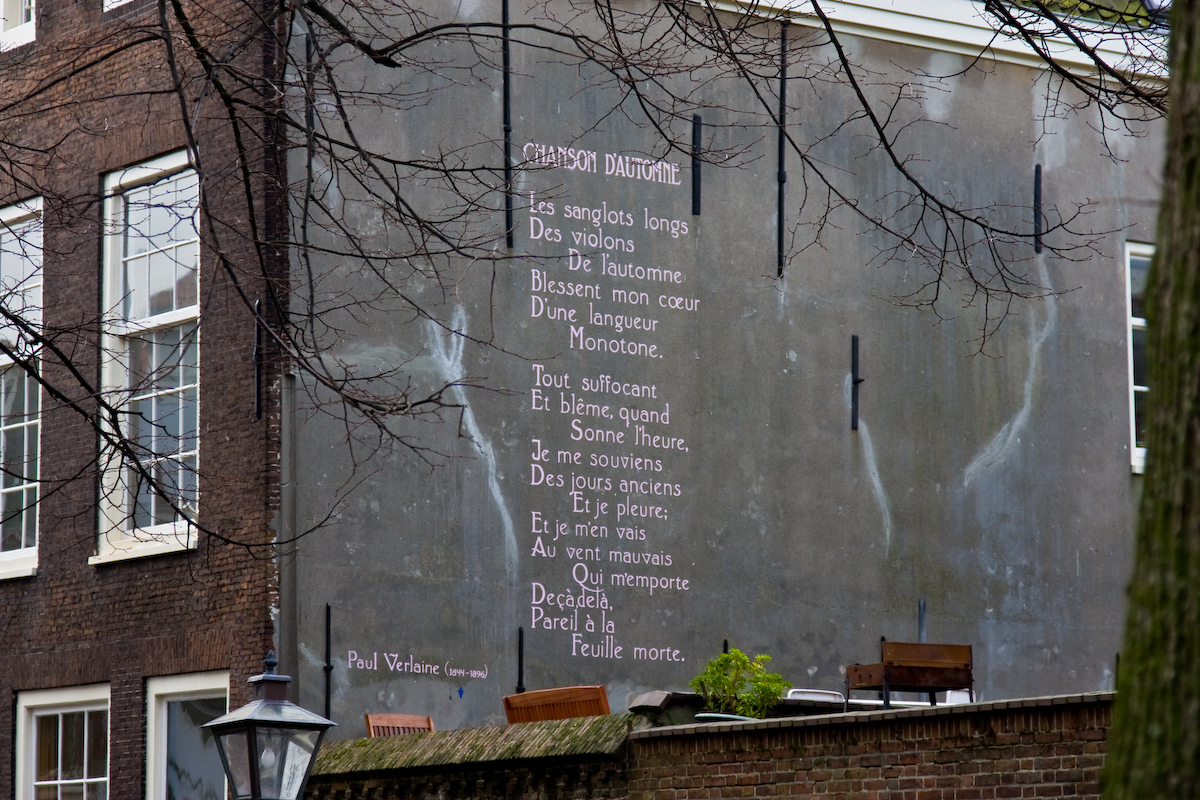 Verlaine has been to Leiden once, when he visited the Netherlands for a short series of lectures in November 1892. In the diary he kept during the trip, he described the preparation for the recital in Leiden, which took place on 7 November in the refectory of the clubhouse of student fraternity Amicitia:

Because a local professor had said not to have understood why one would benevolently receive a crook of my standing, I picked a piece from my work in which this word occurs, in order to stick it to him, should he be present.

This probably never happened, as it was mainly students who showed up at the recital:

I entered the saloon, chiefly occupied with many young men, several ladies, and a few grey heads, allegedly belonging to professors who had come around. All the same! When throughout my recital I got to the part in which the word voyou (crook, gangster) occurred, I made it resound through the saloon and it struck a grand chord. Naturally, the recital ended with a nearly tempestuous applause!

From 1993, Verlaine could again be found in Leiden: at Pieterskerkhof 4. It was the 7th poem realized by the TEGEN-BEELD Foundation. 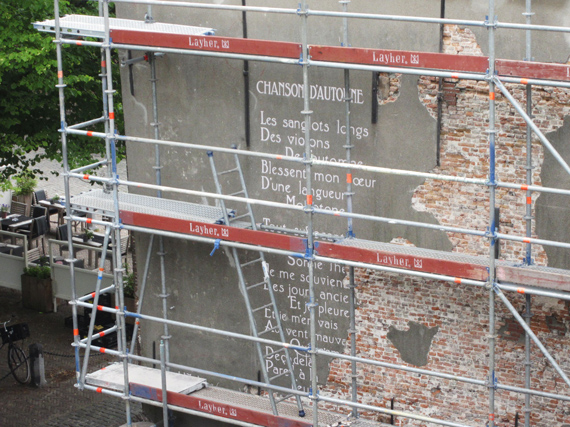 Verlaine is regarded as one of the leading French Symbolist poets. Symbolism is a movement in literature, music and visual arts which started in France circa 1850 and spread throughout Europe. Imagination, illusion and intuition are central and the symbol refers to the inner world, with emphasis on visions, death, impotence, languidness, decadence and calamity.

Verlaine’s collected work is entitled Les Poètes Maudits (The Cursed Poets). ‘Poète maudit’ refers to a misunderstood, social maladjusted poet. The expression was quickly picked up and used throughout Europe by an entire generation of artists.

Musicality in poetry above all.

How refreshing it is that one is not envied! It does one good to be perceived as unhappier than anyone else.

The sobbing tones
of the violins
that autumn plays
wound my heart
with a languor that
lingers always.

Stifled and wan
the moment when
the tocsins toll,
I recall the ways
of the dear, dead days
and tears fall;

And I must go
where ill winds blow
without relief,
blown here, blown there
as though I were
an autumn leaf.

This entry was written by Het Taalmuseum in collaboration with Clara Osterhaus. The translation into English is by Demi van de Wetering. The following sources were consulted:

Read the news report on Verlaine's visit to Leiden in the Leiden Courant.