Dutch Sign Language is a full-fledged language: you can dream and think in it, share stories and make theatrical performances. Wim Emmerik was a pioneer in this field; from the 1990s he was the one to put poetry in Dutch Sign Language on the map. His most inspiring works are part of the series of film poems he recorded around 2004. These show a perfect combination of form and content. In Polder, he interprets the Dutch landscape - not by using distance, but in close-up.

When he was only a baby, Wim Emmerik lost his ability to hear as a consequence of severe meningitis. He grew up learning Dutch Sign Language and combined technical education with a training in classical ballet. Later, he also worked for the Dutch National Opera and several dance companies.

From the start of the 1970s, Wim Emmerik worked together with Jean Couprie to introduce so-called ‘mime-cartoons’ to theaters throughout the Netherlands. In 1979, the duo won first place at the International Mime Festival in Brno. That same year, they established a foundation for Dutch visual theatre and communication for the deaf. They were inspired to do so after a visit to Sweden: whereas in the Netherlands they appeared to be the only hearing-impaired performance artists, Sweden was home to many theater companies for the deaf and hard of hearing, and professional theater makers.

In the years that followed, Emmerik taught sign language to parents of hearing-impaired children and educators at schools for the deaf and hard of hearing. Because of this, he grew more and more interested in Dutch Sign Language. For decades he participated in scientific studies researching aural impairment and devoted himself to the emancipation and propagation of the language. To this end, Emmerik co-founded the Handtheater (‘Hand theater’), which brought the very first performances in Dutch Sign Language to the stage. Emmerik was also involved in the realization of the first children’s books in Dutch Sign Language (1988), and a year later he presented the first story in this language on Dutch national television: De stier wacht op groen ('The bull waits for the green light'), which he had created himself.

In 1989, Wim Emmerik visited Gallaudet University in Washington, where he took a workshop given by American poet Clayton Valli (1951-2003). Upon his return in the Netherlands, he started creating poetry in Dutch Sign Language. His hard work paid off: he regularly gave stage performances and recordings of his poetry were shown at over seventy festivals all over the world. When he retired in 2005, Wim Emmerik was the first to receive the Dutch Sign Language Prize by the National Association of the Deaf (Dovenschap) for his contribution to the research on sign language and for his artistic contributions to the deaf and hard of hearing community.

In this poem, Wim Emmerik interprets his relationship with the flat landscape of the Dutch polders. The wall poem’s subject matter therefore befits its location, the Leiden Hortus Botanicus. What makes it poetry, however, is not so much the content as the way in which Emmerik makes use of Dutch Sign Language.

Artistic use of Dutch Sign Language is all about imaginative power. Stories and poems in sign language are generally ‘form’ as much as ‘content’, if not more so. For these creators, the language is not just a means to an end. With their bodies, hands and facial gesticulation they give expression to people, animals, objects or nature. This often makes for anthropomorphic poetry or cabaret: the world is interpreted through the human body. Performing this in a way that is believable, relatable and comprehensible, requires ample creativity and composure. Because of his background in dance, theatrical experience and years of practice, Wim Emmerik was a master of this type of performance art.

In 2003, Wim Emmerik created his first film poem, Groei (‘Growth’). Whereas earlier recordings of his poetry were just that: recordings, this video clip was a proper production and placed emphasis on the content. It was received with much enthusiasm, and in 2005 film makers Leendert Pot and Anja Hiddinga made the DVD Motioning, which featured sign poetry by Wim Emmerik and Giselle Meijer.

Motioning was a great success: the clips were shown at festivals in over seventy countries and won awards in Italy, India, Greece and Colombia. One the poems Emmerik made for this series was Polder.

Leiden resident Patrick Meijer explains why Dutch Sign Language is important to him, and why he was happy with the wall poem in this language. Discover his story: 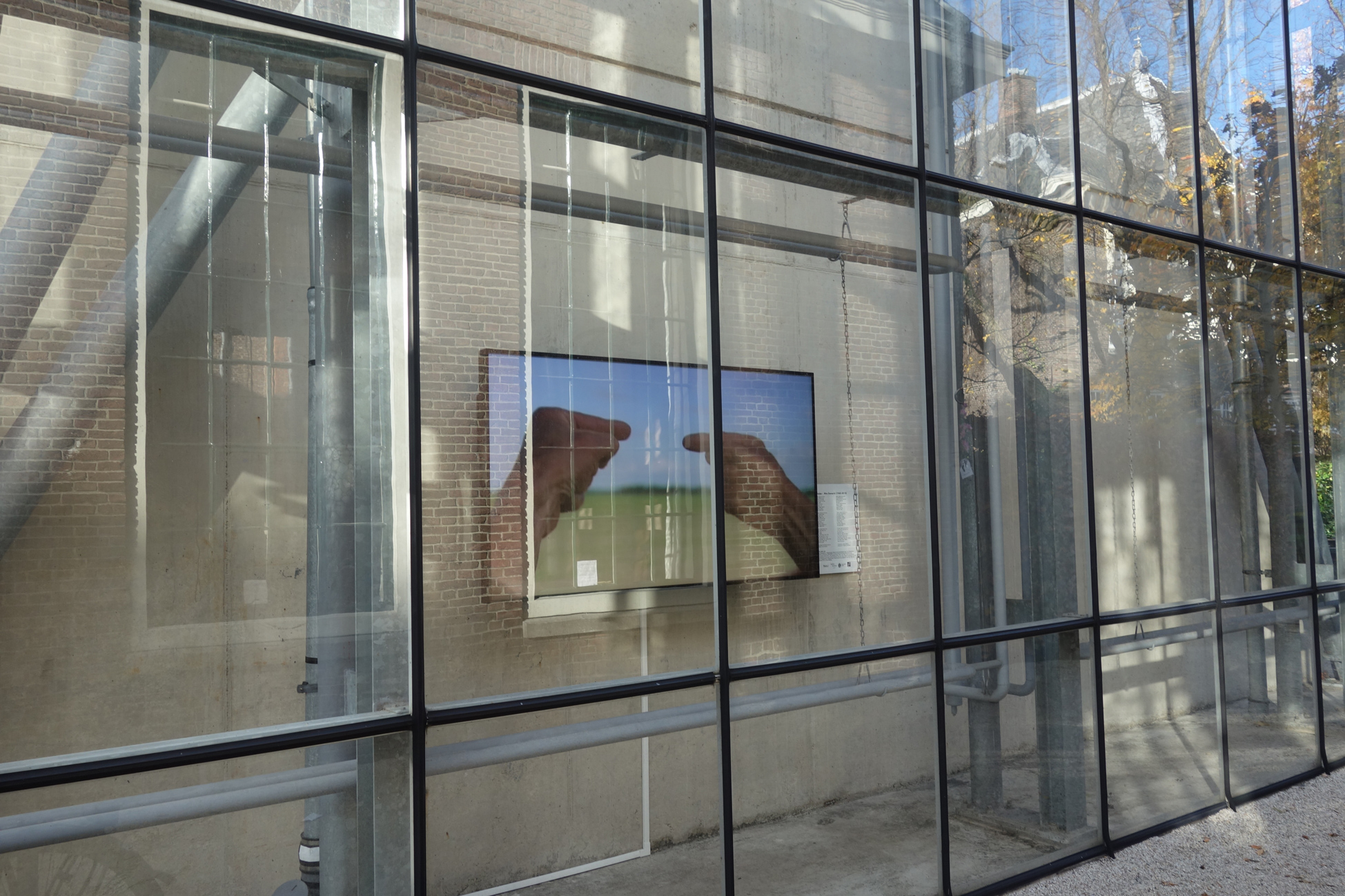 Sign languages come into being in places where large groups of people with hearing-impairment meet. For a long time, this was the case in the town of Katwijk, not far from Leiden, which was home to a sizable deaf or hard of hearing community. At the end of the nineteenth century, the same was true for Leiden, where there was a school for the deaf. Nowadays, Leiden is one of the few places in the Netherlands, along with Amsterdam and Nijmegen, conducting scientific research into sign language.

Victoria Nyst, Ph.D., sign language researcher at Leiden University, started seeking support for the realization of one of Emmerik’s works as a wall poem in 2016. In collaboration with Het Taalmuseum and the TEGEN-BEELD Foundation, this could be realized in 2017. Several interested parties came together to make their contribution to the project, among whom filmmakers Leendert Pot and Anja Hiddinga, Leiden Hortus, Fonds 1818 and LSC-VVSL 1967. Over 120 sponsors donated via a crowdfunding campaign. The wall poem was unveiled amid great interest during the Sign Language Festival on 14 October 2017.

Due to construction work, the poem has been temporarily removed and will be reinstalled at May 1, 2019.

Sign languages are full-fledged languages, with their own lexicon and grammar. They come into being in places where substantial numbers of people with hearing impairments communicate with each other, and are constantly developing and changing - just like all natural languages. This is how contemporary scientists view sign language, but this has not always been the case. For centuries, all efforts were geared towards improving the communication of the deaf and hard of hearing with those who could hear. Signs were seen as a helpful tool, but only to support other means of communication.

From the late nineteenth century onward, signing was actively discouraged. In order to participate in society, the deaf and hard of hearing were expected to learn to speak and lip-read. Sign languages became ‘forbidden tongues’: signing in schools was discouraged and often punished. It was not until scientists and those in power started to recognize that there was something like a hearing-impaired community, complete with its own language and traditions, that this notion started to shift. In the Netherlands, Wim Emmerik played an important part in this process.

From the 1980s onward, general appreciation for Dutch Sign Language started to increase. It was around that same time that the first research conducted into the status of the language, and initiatives were started to improve it. 1999, for instance, saw the appointment of the first professor of Dutch Sign Language. The 2001 kick-off of the Sinterklaas festivities was the first one to be broadcast with a live interpreter. The standardization of Dutch Sign Language, also initiated around 2000, served to improve its status as well. At the time, standardization was put forward as a condition for official recognition of the language. Unfortunately, Dutch Sign Language has yet to obtain legal status as an officially recognized language of the Netherlands, to the grave discontent of many of its users.

The older generation, like Wim Emmerik’s, was told to sit on their hands as they were forbidden to use sign language to communicate. Young people these days, learning sign language as their native tongue, are incredibly fast and proficient. Thanks to YouTube, camera-equipped laptops and laptops with playback function, the deaf and hard of hearing can communicate with each other more easily than ever before.

Onno Crasborn, professor of Dutch Sign Language at Radboud University Nijmegen, in an interview with Trouw (2008)

Wim Emmerik was one of the founders of sign language research in the Netherlands and has been of immense influence to the deaf and hard of hearing community.

Everyday language use is functional and effective, sign language is no different. But you can divert from that. By slowing down the gestures, connecting them in different ways, applying a certain rhythm. Additionally, poetry can of course also be contained within the message. In Polder, you find both.

Pepijn Reeser of Taalmuseum, in an interview with Mare

This poem is in Dutch Sign Language; its English translation is:

Here, grass and sand
The Pastureland
Where you can see far
But are not far
My spot
As far as you can see
Willows, reeds
A bird drifts
Where you live
The wise land

There, where you are far
And look around you
Is nothing such
As willows, reeds
A meadow, a place
Of rest, my spot
That I know
In which I am
The heart leaps up
The open land

To see: there you’ll go far
To be: here you’ll see far
As I pass by
And pass away
Then not there but here
In the land that is in me
The land in which I was
In the polder, the pastureland
Of reeds, birds, willow
Sand and grass

This entry was written by Het Taalmuseum. The translation into English is by Anne Oosthuizen. The following sources were consulted: