Listen to this poem in Dutch.
Voiced by: Graziella Rais

This poem first appeared in Neeltje Maria Min’s debut collection, and also gave the publication its title: Voor wie ik liefheb wil ik heten (For those I love, I want to have a name). Could this mean that she valued this poem more than the approximately 350 others she, by then, had already written? At the very least, the poem seems to have close connections to her private life and relationship with members of her family. Yet the poem is continually being rediscovered by people who relate to it. But is it about the struggle for a unique identity? Or perhaps about dementia? What do you read in these lines?

Neeltje Maria Min was about fourteen when she began reading volumes of poetry. Especially the works of Paul Rodenko and M. Vasalis inspired her to start writing herself. From 1963 onward, her work regularly appeared in the Algemeen Handelsblad, a daily newspaper for which she wrote under the pseudonym Sophie Perk. She also published works in De Gids and Maatstaf. Of the approximately 350 poems she had written by 1966, she selected 50 for her collection Voor wie ik liefheb wil ik heten (For those I love, I want to have a name). This was her big break: the collection of poems has recently been reprinted for the 27th time, making it one of the best selling works of Dutch poetry in history.

Following the publication of her first poetry collection, the press flooded the small town of Bergen to find out more about this 22-year old girl who still lived with her parents, had not completed an education and was apparently already a mother. About the person behind the poems, however, they got to know very little. Min only revealed that societal phenomena went straight over her head, that she hardly ever read and that she had no interest whatsoever in the cultural scene. She also claimed she had “no clue” about language. “The only thing I want is: to be normal, and to occasionally write a poem. That’s all. I am lazy as hell. I just don’t really care.” Those who wanted to get to know her better, had no choice but to resort to her poetry.

Suffocating emptiness or: Poetry as music

Neeltje Maria Min’s oeuvre is not extensive, but its expressive force is all the bigger. Her poetry uses simple language to express a suffocating emptiness. Fans of her work note that it often contains contradictions, which make it exciting. Min is also praised for her elegant yet accessible language use: gorgeous, flowing sentences follow each other, giving the poems a semblance of music. She herself once said: “To me, writing poetry is about determining one’s feelings in any given situation. To imagine something happening to you.”

“My work is a mishmash of my imagination and things that have actually happened to me,” Neeltje Maria Min said in 1966. For this particular poem she apparently drew inspiration from her own situation. In the 1960s, she had a daughter of a year and a half and still lived with her parents. By her own admission, she had little contact with her father and ‘none at all’ with her mother. “My mother has forgotten my name” is how the poem starts - a likely indicator that she felt unseen.

The speaker wants to break free from this ‘namelessness,’ the poem is an appeal for the acknowledgment of her existence. The mention of “diepste naam” (deepest name) possibly refers not only to nomenclature, but also to security and love. The development of an identity of one’s own can only be done in a safe and nurturing environment - which is exactly what the speaker of the poem lacks. Calling someone by their ‘deepest name’ is therefore equivalent to showing someone love and recognition. Your name is only really meaningful to those who love you - this much is apparent from the poem’s final line.

“They had told him I occasionally write poetry. He asked to see some of my work. And well - I think he liked them. At least, he then wanted to publish a couple of them in Maatstaf.” This is Neeltje Maria Min’s account of the first meeting with her publisher in her hometown Bergen in 1965. A year before her first collection of poems, Voor wie ik liefheb wil ik heten (For those I love, I want to have a name), hit the shelves.

The title of the poetry collection is the closing sentence of Mijn moeder is mijn naam vergeten (My mother has forgotten my name), the first poem featured in the work. She most likely wrote this poem in 1966. In April of that same year, the poem was first published in the then leading literary magazine Maatstaf. This publication contributed to the hype around her first collection of poems, upping its print from 1000 to 7000 copies.

Mrs. Borg is 97 years old. She has been living in care center Groenhoven for years. Her husband has passed away, but her daughter visits quite often. When the weather is nice, they take a stroll along the water. Together they walk to the Rijn en Schiekade. Across the bridge is an eggplant-colored house. Mrs. Borg likes to take a rest there. Because she gets tired, but also because of the poem on the wall. Although she cannot read it that well anymore, she knows what it’s about. It is about a girl who is pregnant. She doesn’t know whether it will be a boy or a girl. She is not married, a scandal at the time. Her parents are furious. She is out on her own. Pitiful but also very beautiful. Mrs. Borg and her daughter slowly continue their walk. In Groenhoven the ladies wait with coffee. For children who have forgotten their mothers. 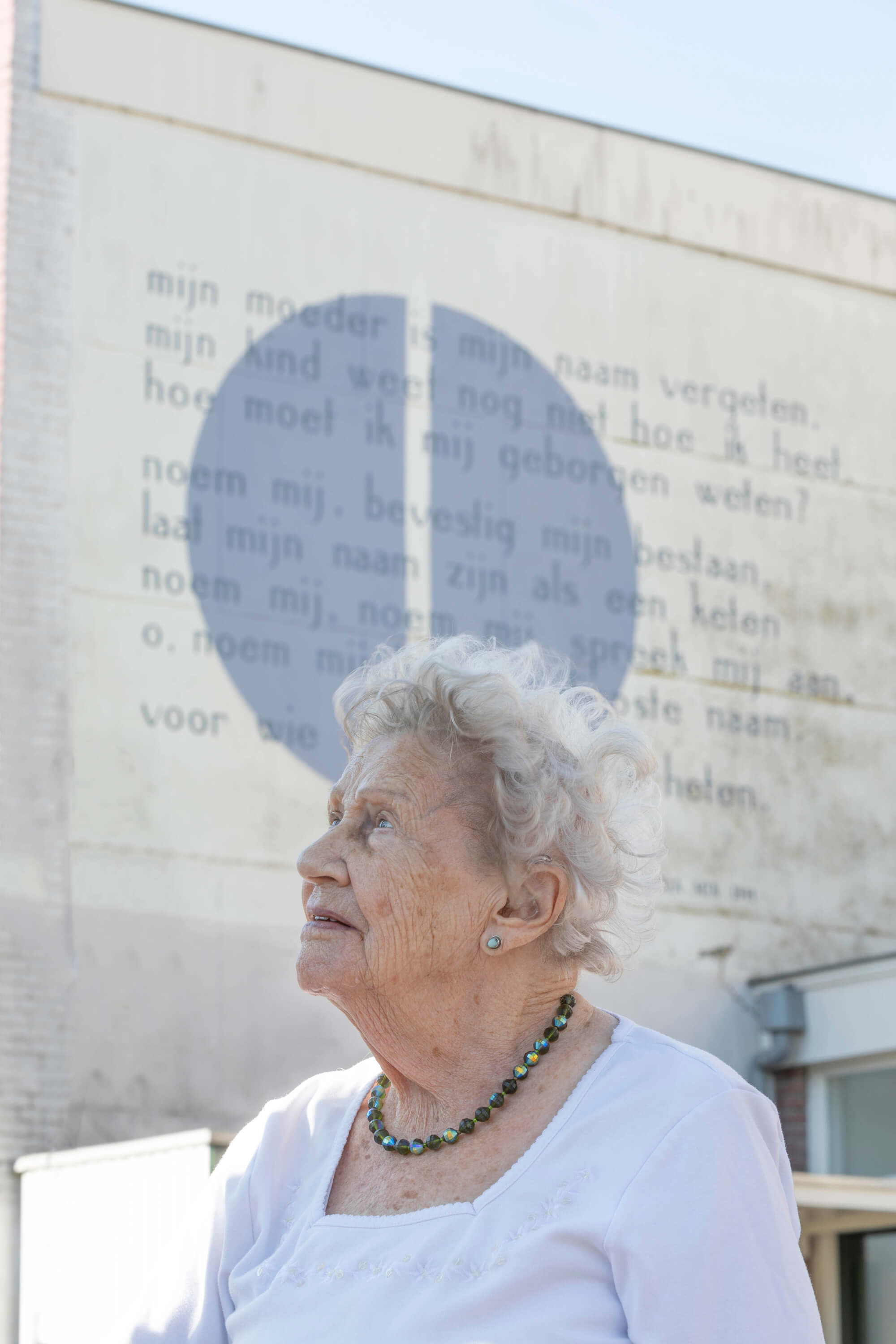 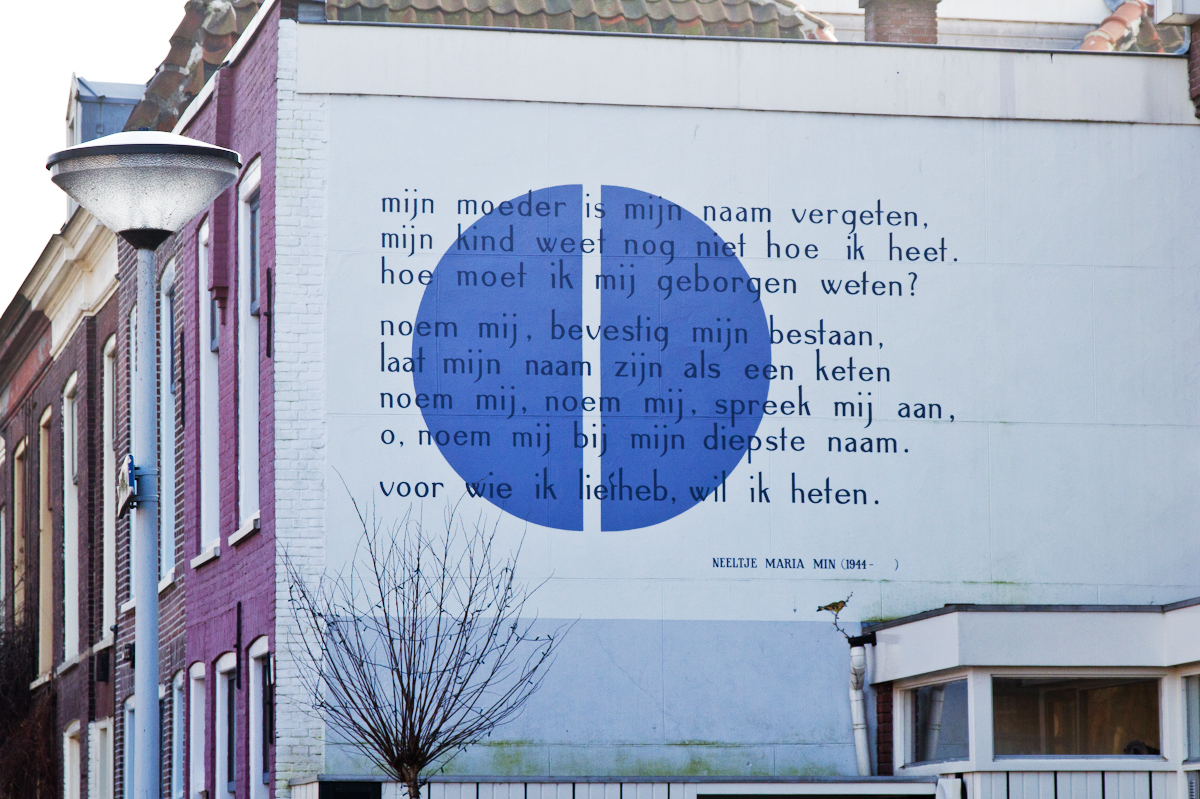 The poem was chosen by the resident of this house, Corrie van der Sijs. Her signature is the little siskin (Dutch: ‘sijs’) underneath the poem on the right-hand side. The abstract illustration around the poem was designed by Ben Walenkamp. Being a figurative painter, J.W. Bruins could release his creative talent on illustration of the bird.

Neeltje Maria Min in the Netherlands

This poem is one of the best-known works of poetry in the Netherlands. It addresses themes that are effectively timeless, such as the gap between different generations, the relation to one’s family, the desire for a sense of belonging, the need for recognition and the question of one’s own identity. Due to the relatability of these themes and the quality of the writing, the poem has featured in numerous volumes of poetry.

Min’s debut collection had been such a huge success, it was difficult to match. This is perhaps why nearly two decades passed before she published one again (1985) and then another eleven before her third and final collection came out (1996). Throughout her life, Neeltje Maria Min eschewed the limelight and rarely agreed to interviews: her work speaks for itself.

She is only ever annoyed at herself. She is completely independent and doesn’t let anyone affect her.

Adriaan Roland Holst, a well-known Dutch poet who, like Neeltje Maria Min, was also from Bergen

Neeltje Maria Min, a name like a nursery rhyme about a sweet, innocent girl, who dances through life like something frail and light. The truth about Neeltje Min is not quite as romantic; she is a blond, pale young woman who has fought her way through more seasons of miserable fall than she’s enjoyed sunny springs.

De Tijd, in an article after the publication of her debut collection

This poem has been set to music by the Leiden band Street Fable.

My mother soon forgot my name,
my daughter hasn’t learnt it yet.
How could I feel that I’m safe?

Name me, lay down who I am,
let my name be like a chain.

Name me, name me with your breath,
oh, name me by my deepest name.

For my love, I will be named.

This entry was written by Taalmuseum in collaboration with Emmy Stevens. The translation into English is by Anne Oosthuizen. The following sources were consulted: