Is (Afro-)American English your mother tongue and would you like to recite this poem? Contact us at muurgedichten@taalmuseum.nl!

Langston Hughes wrote poetry as if it was jazz music. Jazz musicians made a lot of use of the tom-tom drums. Those were derived from the African drums, that Hughes might have heard himself during his travels. Because of that, the instrument’s sounds were a symbol of black self-awareness for him. The poem is an African dance taking place in an American jazz club in Harlem, New York.

Hughes’s parents got a divorce when he was still a child. Until he was 13, he lived with his grandmother. After that, he moved in with his mother and her husband in Lincoln, Illinois, where he began writing poetry and became editor of the school newspaper. After graduating high school, he lived with his father in Mexico for a year. His father disapproved of his plan to become a writer, and offered to pay for an education in engineering at Columbia University in New York. Hughes studied there for a year, but could more often be found in Harlem.

In Harlem, Langston Hughes plunged into the black cultural life. The Harlem Renaissance was at its height: blues, jazz, poets, writers, black awareness. After quitting his education, he worked various odd jobs to stay alive. One of those jobs was being a sailor on international voyages. He visited West Africa and stayed in England and Paris for some time. Back in the USA, he lived in different places. He finished his education in Lincoln and moved back to Harlem, where his authorship fully blossomed.

In 1926, his first collection, The Weary Blues, was published, which included Danse Africaine. The dominant theme of his work can already be found in there: black awareness. His poetry is characterized by (jazz) musical rhythm: jazz poetry. Because of the success of his publications, Hughes realized that he could live on his authorship and he focused fully on that. Besides poetry, he published many novels, stories and several plays. In 1967, he died from complications of prostate cancer surgery. In his memory, his house in Harlem was declared an official landmark and East 127th Street, where he lived, was renamed Langston Hughes Place.

Danse Africaine is one of Hughes’s first published poems. It contains the most important themes of his work: black awareness, attention for African roots and the connection between music and poetry.

Africa runs through the veins

The poem can be divided into three parts: the slowly stirring first part (The low beating of the tom-toms), the dance in the middle piece (Dance!) and the slowly fading ending (and the tom-toms beat). On the wall in Leiden, this structure is powerfully visualized by the pitch black background of the first and last stanza and the red band in between, symbolizing the fire. The description of the sound of the tom-toms conjures up a feeling of a heartbeat (low… slow / slow… low - / stirs your blood). In short: Africa runs through the veins of the black man and woman.

After Langston Hughes quit his studies at Columbia University in 1922, he worked various odd jobs for a while. His job as a sailor allowed him to visit Europe and West Africa. In this period of his life, Danse Africaine came into being. Hughes was 20 years old when he wrote it.

Back in the USA, he settled in Washington, D.C. in 1924. He worked as a waiter in a restaurant that was regularly visited by famous poet Vachel Lindsay (1879 - 1931), to whom he offered his work to be read. Lindsay was impressed and put Hughes in contact with a publisher. In 1926, his first collection, The Weary Blues, was published, containing Danse Africaine. The collection as a whole is considered Langston Hughes’s signature work. 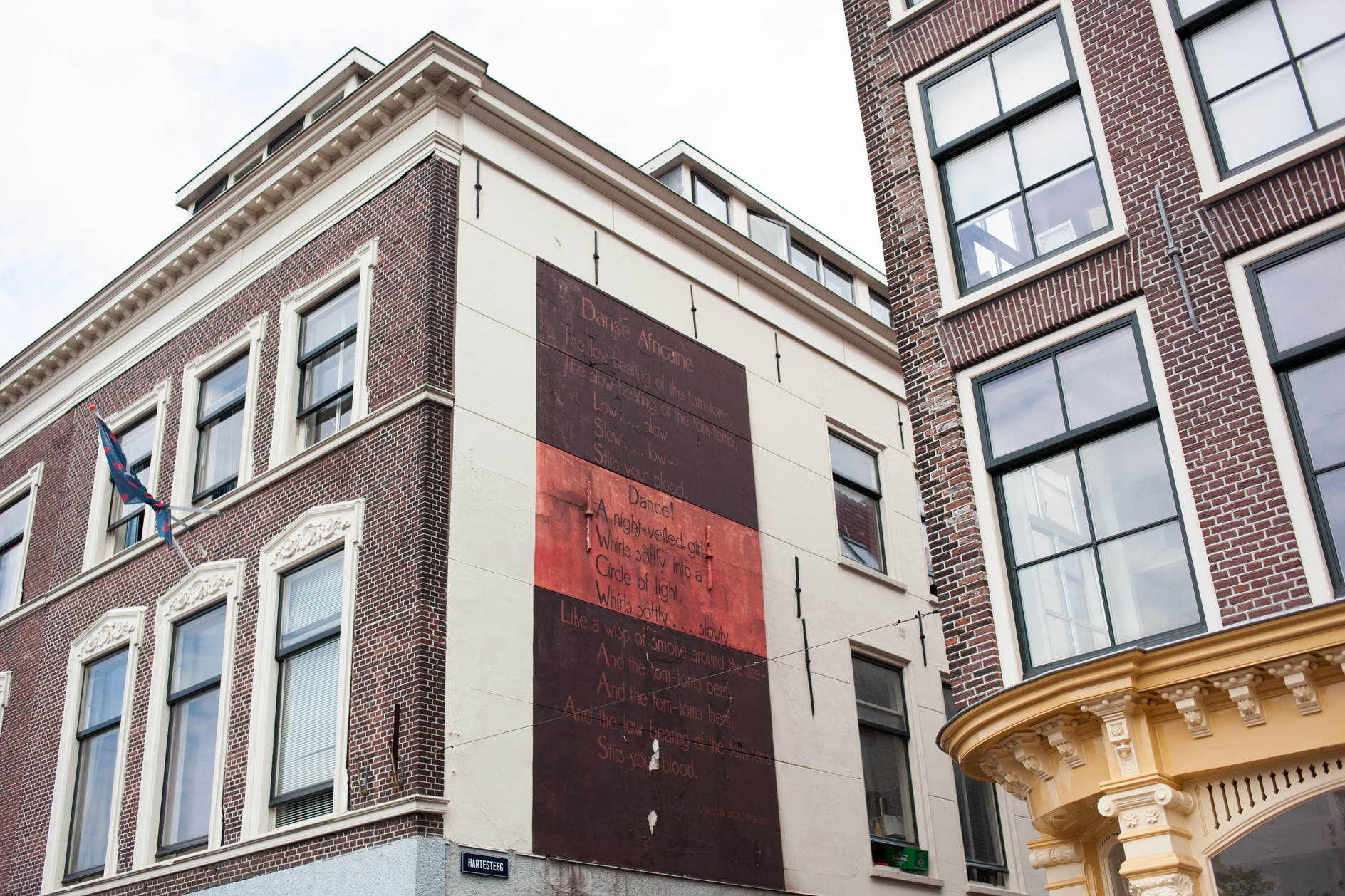 This poem can be found at Nieuwe Rijn 46 in Leiden since 1994. It was the 24th wall poem realized by the TEGEN-BEELD Foundation.

Poems by three American writers, Langston Hughes (Afro-American), Wotkoce Okisce (Native American), and Edward Estlin Cummings (White American), have been painted in three succeeding alleys along the Nieuwe Rijn. They represent three ethnic communities in America and together give an impression of the diversity of the USA.

Langston Hughes is viewed as the father of the black awareness writing movement. He was (and still is) an inspiration for many Afro-American writers and for movements such as those of Marcus Garvey or W.E.B. du Bois. On an international scale, Hughes also inspired the négritude movement, which consisted of black awareness writers from Africa and African diaspora, such as Léopold Sédar Senghor (Senegal) and Aimé Césaire (Martinique).

Hughes’s ashes are buried in the Arthur Schomburg Center for Research in Black Culture in Harlem. The exact location is marked by a line from the poem The Negro Speaks of Rivers: ‘My soul has grown deep like the rivers’.

This entry was written by Het Taalmuseum in collaboration with Ellen van Dilst. The translation into English is by Emma Knapper. The following sources were consulted: