Is Muscogee your native language and would you like to recite this poem? Please contact us at muurgedichten@taalmuseum.nl!

How do tornadoes come into being? The territory of the Creek experienced these whirlwinds regularly, which gave rise to many superstitions. Were they created by malicious spirits playing tricks, and tossing the tail of the poor water turtle down to earth? This is what small children believed, and also perhaps more adults than were willing to admit to it. Because the fear of tornadoes lived in hearts of all ages. Louis ‘Little Coon’ Oliver, or Wotkoce Okisce, wrote about it in this poem.

Louis Oliver was born in the region of Chattahoochee, nowadays part of the state of Alabama but in the early 1900s still an Indian Reservation. Oliver belonged to the golden raccoon clan, a part of the Yukki tribe of the Creek nation, or Muscogee. He also went by Little Coon and Wotkoce Okisce.

Oliver graduated high school in 1926. This was remarkable, as not many American Indians obtained their high school diploma in those days, and Oliver had had to do it without the support of his parents. They had passed away at a young age, after which Oliver was taken in by family members. Being a relatively high-educated American Indian left Louis Oliver in a bit of a solitary position: some members of his tribe thought he was ‘capitulating to the White Man’s ways’, but there he was also regarded as an outsider.

Louis Oliver gathered fame when, in the 1980s, his focus turned to his own heritage. He wrote two books containing stories and poems, Caught in a willow net (1983) and Chasers of the sun: Creek Indian thoughts (1990). It was then that his work also became more widely appreciated among American Indians. In 1987, he received the Alexander Posey Literary Award from the Mvskoke Arts Council of the Muscogee people.

As can be derived from its shape, this poem is about a tornado. When he wrote it, Wotkoce Okisce lived in Tahlequah, Oklahoma, a state struck by tornadoes every year. The Muscogee people had various ways of explaining how tornadoes came into existence. In one of the stories, they were caused by evil spirits, which yank the tail off the water turtle and toss it from the sky down to earth. Did only the children believe these tales, or was it effectively popular belief? Regardless of whether or not these folklores were believed, the fear of tornadoes was very real.

Wotkoce Okisce (Louis Oliver) wrote this poem in Mvskoke, or Muscogee. It is a language nowadays still spoken by approximately 5,000 people, mostly by American Indians of the Muscogee (Creek) Nation. For him, the language was an integral part of his cultural heritage. At the same time, Wotkoce Okisce had had a Western education, in which he had been introduced to world literature and Western poetry. In the poetry he wrote from the 1980s onwards, these two traditions meet. He drew inspiration from folklore, but occasionally chose to give them a new shape. 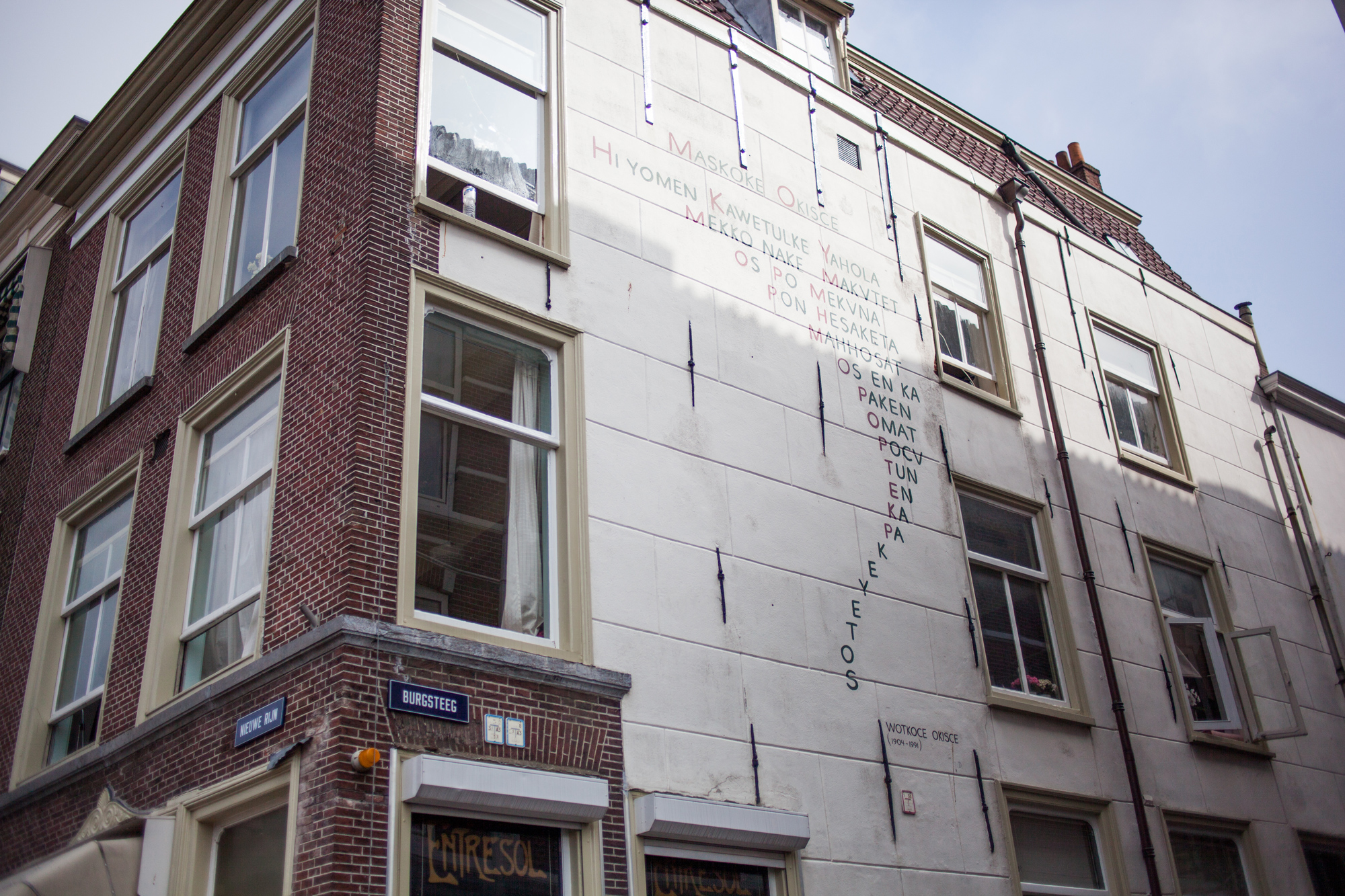 This poem can be found on a Leiden wall since 1993 and is part of a set of three poems, in three languages spoken in the USA, applied along the Nieuwe Rijn river. In 2008, when the outer wall of the building required restoration, the painters redid not just the wall, but the poem as well - they even emulated the style of original painter Jan Willem Bruins.

Here, you can watch a video about the poem Fishing, in which it is also read. Fishing was written by Joy Harjo as a tribute to Louis Oliver.

The little ones said: Tornados
are caused by evil spirits
yanking the tail off
the water turtle
and it spins
down and
round and
round
swiftly
to the
ear-
th
t
e

Translation: Anne Oosthuizen, based on the Dutch translation by Jelle Kaspersma

This entry was written by Het Taalmuseum. The translation into English is by Anne Oosthuizen. The following sources were consulted: