In 1909, Filippo Marinetti published the legendary The Futurist Manifesto. In this manifesto he proclaimed that technology should inspire poets and a new kind of art should arise. Between 1912 and 1914, his experiences in the Balkan Wars inspired him to write his first collection, Zang Tumb Tumb, which was based on his ideas. In it, he worked with ‘free’ words: they are all over the page, so the typography contributes to the content. This poem could be found on the cover. He wrote it after the battle of Adrianople in October 1912. In this poem, Marinetti imagines the sound of falling bombs and ‘singing’ bullets.

Filippo Marinetti spent his childhood in Egypt, France, Italy and Switzerland. This is why he wrote in both French and Italian later on in life. In 1909, he became world-famous because of the publication of The Futurist Manifesto, in which he proclaimed his ideas on Futurism: Italy should radically free itself from their centuries-old past and focus on modernity. Marinetti was interested in speed and new technologies, like cars and airplanes.

Marinetti himself wrote novels, plays and poems from a futuristic perspective, other Futurist artists also made films and visual art. Futurism was controversial from the start, partly because Marinetti claimed that fights had a purifying effect and propagated war. During the First World War (1914 - 1918), he campaigned to make Italy join the fight, and after the war he became a supporter of fascism. From then on, his poems were more politically charged.

Marinetti was on good terms with Benito Mussolini (1883 - 1945), who was Italy’s dictator from 1922 onwards. The poet joined his fascist party and he voluntarily joined the forces when Italy occupied Abyssinia (Ethiopia) in 1935. However, his attempts at turning futurism into the official art movement of fascist Italy failed. His resistance against the influences from Nazi Germany on Italy also bore no fruit. He remained a loyal fascist and joined the forces at the Eastern front in 1941. In 1944, he died of a heart attack. Mussolini arranged a state funeral for him in Milan.

The poem is a sound reproduction of the war violence during the Balkan Wars in 1912-1913. It displays a bombardment. In the title already, falling bombs can be heard in the stretched vowels. Later on, the bombs strike with three times ‘bum’. Then, impacting bullets can be heard, which fly by with a ‘zang’ and strike with ‘tumb tuuum’.

For Marinetti, form and content are closely related. Words are crookedly divided over the entire page, he called this ‘parole in liberta’, words in freedom. These words look like flying bullets or bombs. Moreover, this poem should not be read as a protest against war: Marinetti was impressed by the modern, industrial, mechanical warfare.

For a very long time, the Ottomans controlled the Balkans, but between 1912 and 1913 uprisings broke out at numerous places. Marinetti traveled to that area as a war journalist to report on the Balkan Wars. In October 1912, he was present at the battle of Adrianople, modern-day Edirne in Turkey. He incorporated that war experience in his poem Zang Tumb Tumb. This is also the title of the collection, in which multiple war poems are collected. 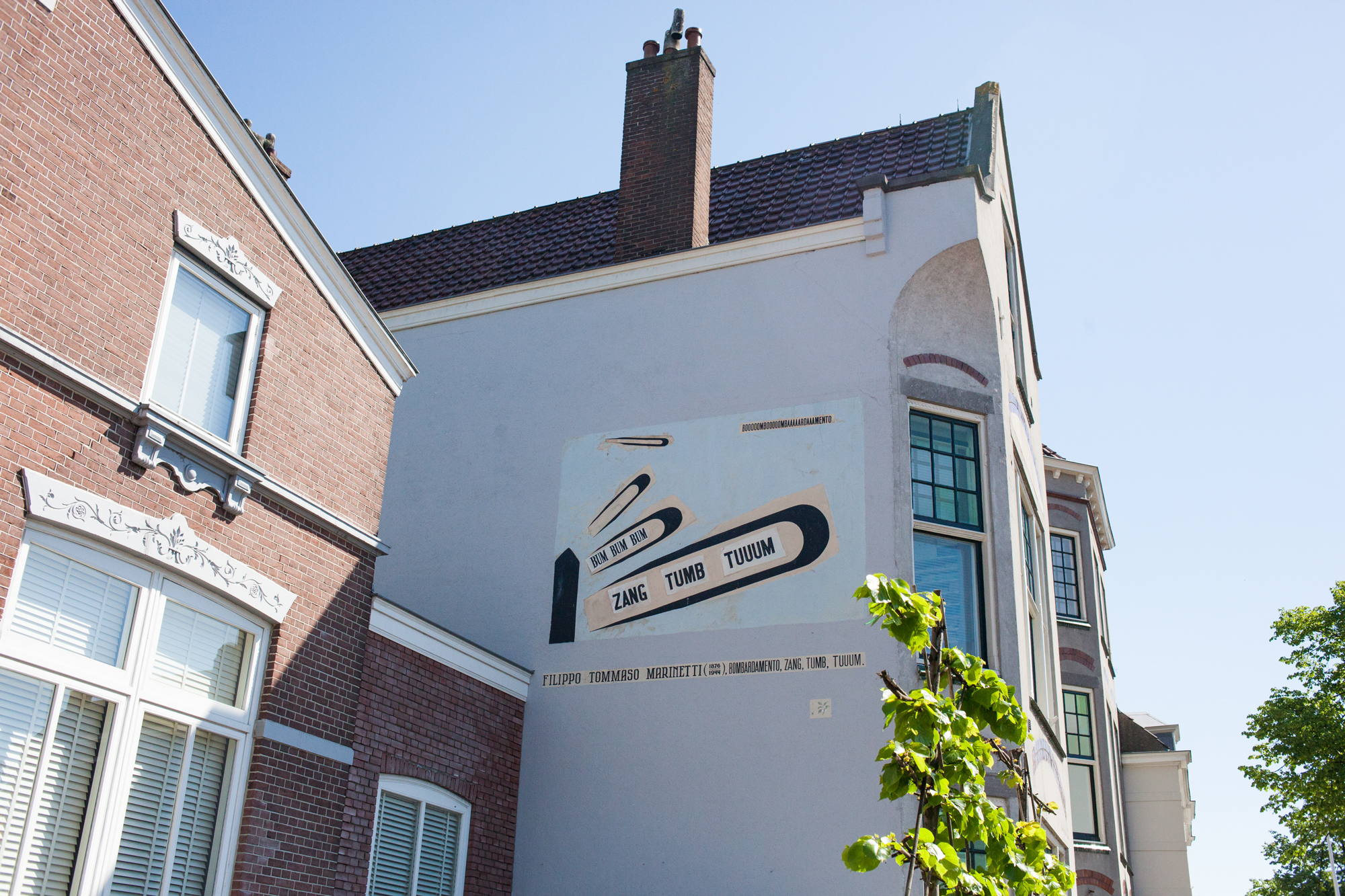 This wall poem was realized at Hoge Rijndijk 8 in Leiden in 2003. It was the 88th wall poem painted by the TEGEN-BEELD Foundation. The poem is an excerpt taken from the title page of Zang Tumb Tumb. The poem itself is a lot longer.

6. The poet must spend himself with ardor, splendor, and generosity, to swell the enthusiastic fervor of the primordial elements

Filippo Marinetti in The Futurist Manifesto, translation by R.W. Flint

10. We will destroy the museums, libraries, academies of every kind, will fight moralism, feminism, every opportunistic or utilitarian cowardice

Filippo Marinetti in The Futurist Manifesto, translation by R.W. Flint

In The Futurist Manifesto, Marinetti names his car crash in 1908 as the moment at which he saw the wonders of technology and developed Futurism.

In 1918, Marinetti founded a political party: the Partito Politico Futurista (Futurist Political Party). It only existed for a short time.

The Swedish new wave pop band Zzzang Tumb, who scored a few hits in the 1980s, is named after this poem.

This poem was considered controversial for a long time. Until the 1970s, original printed publications were worth only a few hundred euros. Now, however, the price is estimated to be a few thousand euros.