Hans Lodeizen’s life was dominated by loneliness. At the age of two, Lodeizen was diagnosed with asthma, so he could not play with friends when he was a child. This is why he mainly spent his free time around the house, such as looking at ants or reading books.

During adolescence, his asthma disappeared, but he ran into another issue: he discovered that he was gay and could not talk about it. Lodeizen tried to get to know himself better by reading even more and by writing poems. In 1943, during the war, he graduated high school. This also meant that he had to go into hiding in order to not get deployed.

After World War II, he studied law at Leiden University for a short while. In 1946, he left for America to study biology. However, he quit in 1948 and came back to the Netherlands. In America, he had liberated himself in more than one way. He came out as gay and found his own form of poetry, which appealed to de Vijftigers (‘Those of the fifties’) particularly. From 1948 to 1950, he wrote over 500 poems, a selection of which would appear in his first poetry collection, Het innerlijk behang (‘The inner wallpaper’). The collection appeared in 1950 and turned out to be his last, because he died from leukemia shortly after his 26th birthday.

The first line of the poem shows a positive feeling for life: a certain group, ‘we’, treats life beautifully. It remains unclear how this should be done, but it points towards a high-spirited mindset. The second verse, though, introduces an odd comparison and turns the imagery around completely: we shall treat life in a big way like how we treat a murderer among us. However, a murderer is rejected, lives on the edge of society. We would then also reject life itself. It is an odd contrast, but it characterizes the poem.

The poem seemingly revolves around the death of Vaslav Nijinsky, a Russian ballet dancer of the famous company Les Ballets Russes, who died on 8 April 1950. He received the most fame with the piece Prélude à l’après-midi d’un faune in 1912, a dreamy ballet piece based on the music by Claude Debussy, showing the awakening of a faun. Nijinsky’s career ended abruptly in 1919 when he was diagnosed with schizophrenia. He would remain silent until his death, 30 years later.

The dying art in the mouth of the poet in the third and fourth verse seems to refer to this silence. Lodeizen projects this silence on a poet, he may even be referring to himself. If a poet does no longer speak words, the art dies, because the poet only has words at his disposal. The next verses explicitly refer to the death of Nijinsky. By putting down flowers, tribute is paid to the poet and also to the beauty, and in doing so, the memory is kept alive.

The poet in the spotlight

The ending of the poem is estranging. ‘We’ is used again, but this time it is unclear to whom it refers. A few wishes are expressed: a handful of children, wine and a playground. These wishes seem to be Lodeizen’s own. With children he could mean boys, possibly young men, the playground could refer to a place where he could meet them freely. It therefore seems to be a cry for freedom, an opportunity to act on his sexual preference. The statement ‘beaten rough by the sun’ also fits into this: he could then bring his homosexuality into the light, so that it can be cleaned (the older meaning of ‘afgerost’ (‘beaten’)).

Now, the first two lines can be explained with more ease as well. On the one hand, we want to live life to the fullest, give anything for it. However, Hans Lodeizen asks himself whether this is still possible if we are rejected by society due to, say, sexual preference. 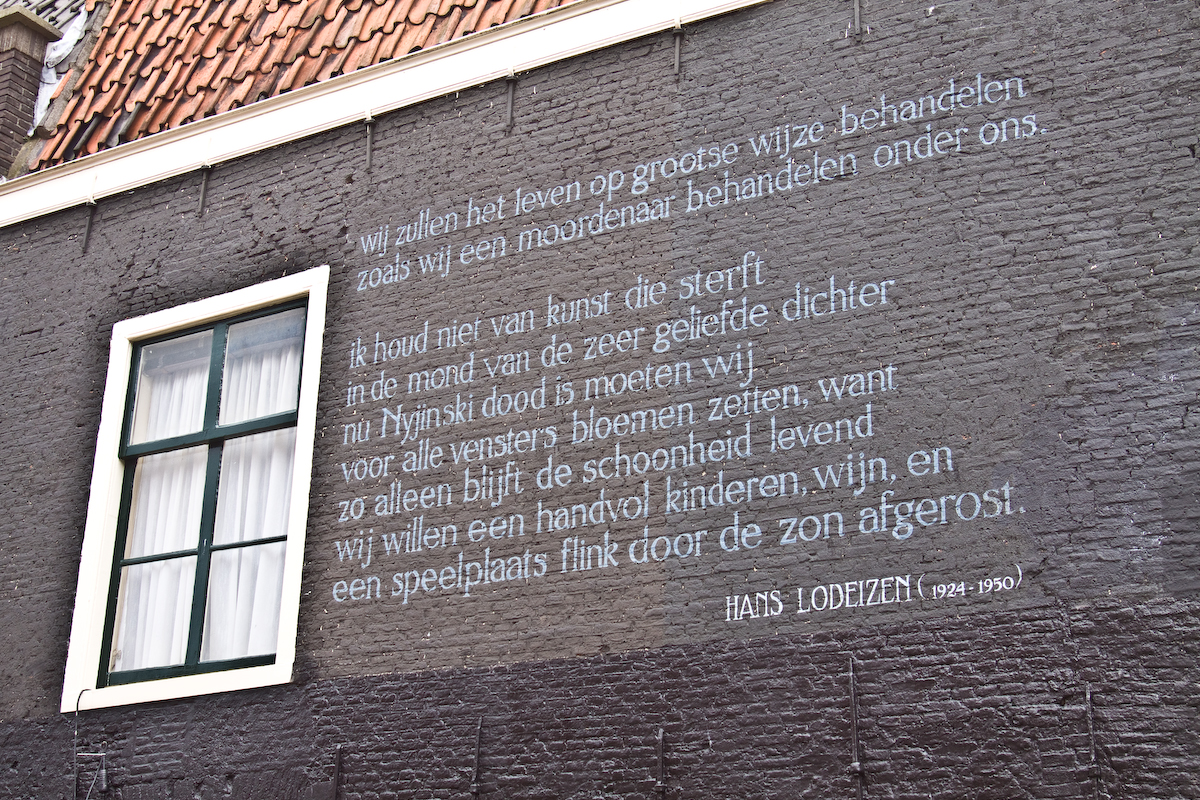 After World War II, Hans Lodeizen studied at Leiden University for a short time. He started studying law, but soon quit and traveled to America to study biology.

This wall poem can be found at the side wall of Haarlemmerstraat 78 in Leiden since 1993. It was the 6th wall poem that was realized by the TEGEN-BEELD Foundation.

This poem is put to music by the Leiden band Street fable.

We shall treat life in a big way
like how we treat a murderer among us.

I do not like art that dies
in the mouth of the beloved poet.
Now that Nyjinski is dead we must
put flowers in every window, because
only like this, beauty remains.
We want a handful of children, wine, and
a playground beaten rough by the sun.