Are you a native speaker of Hebrew and would you like to recite this poem? Please contact us at muurgedichten@taalmuseum.nl!

What to do when your friends and acquaintances disappear one by one and the only thing that remains are their gravestones? Yosef Sarig, a young man, pictures the time he will silently join them. Unfortunately, this never came to pass, as he died at the age of 29.

Yosef Sarig was born in the kibbutz of Beit HaShita in the Jezreel Valley, about 30 kilometers from Nazareth. In the Six Day War (1967), he served in the Israeli military. After the war, he studied music, which was one of his greatest passions besides poetry. Sarig taught music, composed, and organized choir and orchestra performances. He married and had two children.

When in 1973 when Israel was attacked by Egypt and Syria, it meant the start of the Yom Kippur war. Sarig was drafted into the army again and was assigned chief of a tank unit on the Golan Heights. He was killed on the fifth day of the war 10 October 1973. He was 29 years old and a promising musician and poet.

In Israel, Sarig is most known for his songs, for which he wrote the melody and lyrics himself. His song Light and Jerusalem (אור וירושליים) is known nationwide and can occasionally still be heard on the radio. The painfully ironic My death came to me suddenly (מותי בא לי פתע) is also played from time to time.

The title of this poem Scales can also be translated as ‘balance.’ Sarig looks ahead to a time in which he will take stock of his life. He will be at peace with joining his deceased friends and acquaintances. Unfortunately, this never happened because Sarig died at the young age of 29.

Sarig wrote this poem between 1966 and 1973. During the day, he helped grow ornamental plants in the kibbutz, and at night he studied music, and organized music nights on a regular basis. Life in the kibbutz was all about communal living and camaraderie was highly valued. Did this moral fiber inspire him to write this poem? 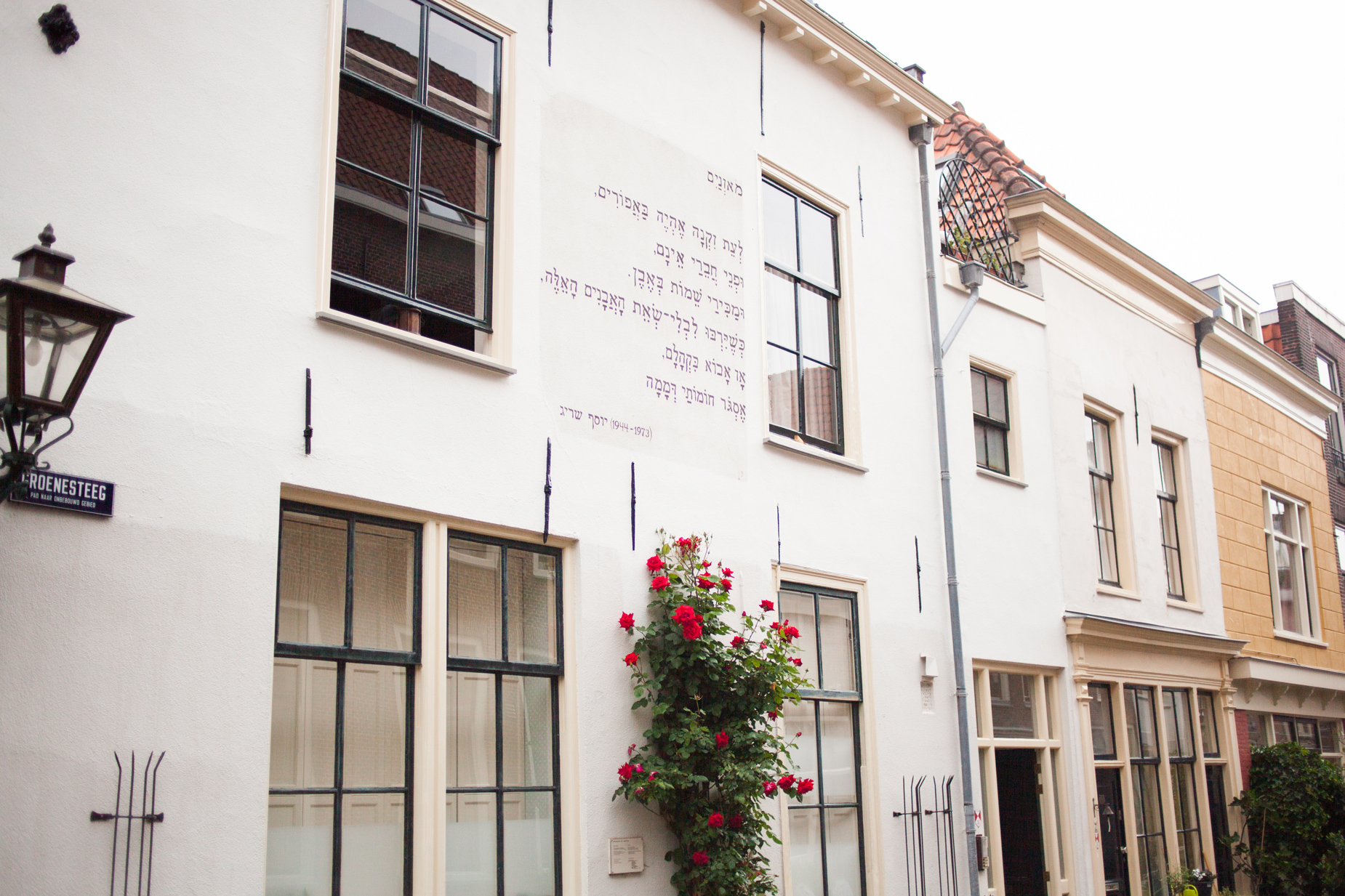 This poem can be found in Leiden since 1995. Jan Willem Bruins and Ben Walenkamp discovered the poem in a collection of Hebrew poetry and were immediately captivated. The residents of Herengracht 47 were ecstatic when Bruins and Walenkamp met with them to discuss the application of this poem on the wall of their house. They themselves had lived in Israel and their daughter was born there.

He was a friendly guy and all of his friends loved him; he was always a source of joy to everyone who knew him and yet he was also an introverted and lonely man.

Taken from his obituary, published by the Israeli army

You can listen to the song ‘Light and Jerusalem’ by Yosef Sarig online.

In my old age I'll wear grey,
when my friends' faces are there no more,
and my acquaintances' names are on stone.

And when these stones have become unbearably many,
I shall join their company
and quietly close my doors.

This entry was provided by Het Taalmuseum. The translation into English is by Natasja Oorthuis. The following publications were consulted: