Is Afrikaans your native language and would you like to recite this poem? Please contact us at muurgedichten@taalmuseum.nl!

Young children use plain language. What they want or need is instantly clear. As fluency increases, language use becomes more intricate. Eybers seems to surrender to this notion, but does not seem unequivocally positive about it. Could it be that children’s language is sufficient, and that all else is redundant or contrived? Her poem seems its own counterargument: Eybers plays with double meanings and showcases the multifacetedness of language.

Eybers was the first female poet to publish a collection of poems in Afrikaans. She studied the language at Wits University in Johannesburg and became editor of several (literary) magazines. In 1937 she married businessman Albert Wessels. They had four children, but the couple split up in 1961.

After her divorce, Eybers emigrated to Amsterdam. She quickly made a name for herself in the literary scene there. Although she kept writing in Afrikaans, she allowed for some Dutch elements here and there, resulting in what some called ‘in-between language.’ She published nearly thirty volumes of poetry. In 1991, she was awarded the P.C. Hooft-prize, one of the most prestigious Dutch literary prizes.

Eybers starts off this poem with language a small child will already know. Needs and thoughts are presented clearly and in a very direct way. This type of language, according to Eybers, will “last them a lifetime,” essentially: you don’t need more than the language you knew when you were three. And yet we acquire more complicated and clever language, “diggeweefde sin” (closely-woven sentences). Is that merely embellishment? This language lesson seems to teach us that language also creates distance.

In this poem, Eybers plays around with double meanings. That first rededele man is taught can be translated as ‘word class’ but also alludes to the dissection (dele) of reason (rede), or making one’s thoughts explicit. And the three “voegwoorde van kunstige verweer” (conjunctions of artful deflection), daarenteen, ondanks and desnietemin are in effect no conjunctions, but prepositions. They do not conjoin, they create distance. And though the word kunstig generally has positive connotations, rather than ‘artful’ it can here be taken to mean ‘artificial’, or feigned.

A year after she had moved to the Netherlands, Elisabeth Eybers published a collection of poetry entitled Balans (Balance, 1962), which also includes the poem Taalles (Language lesson). In it, she reflects critically on her life. Fellow poet Jozef Deleu, who paid her a home visit when she was working on this collection, recognized in Balans “disillusionment, sharp at almost every edge, of a person who believed many things, hoped who knows what, perhaps too much, and above all loved in vain. This mother going on fifty is left with the mere pieces of her own heart.” 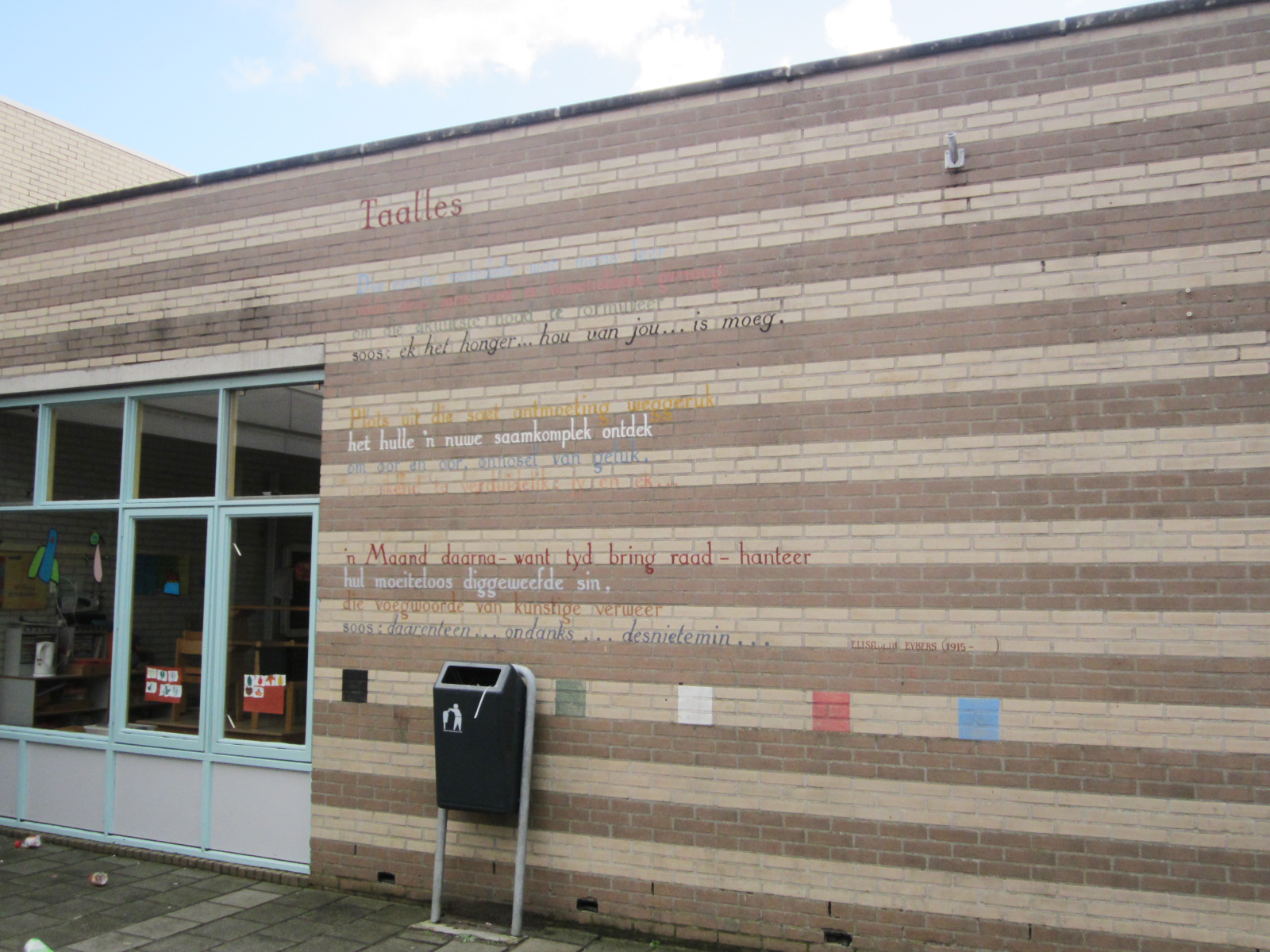 Taalles (Language lesson) can be found on the wall of the Anne Frank school in Stevenshof. All streets in this neighborhood were named after prominent women, it therefore seemed only logical to adorn it with work by a female poet. The design is exceptional: every line was given a different color. These are the colors of the South-African flag.

Since I’ve been living in the Netherlands, I am naturally more aware of my exceptional identity as a speaker of Afrikaans. And yet I cannot rightly call Afrikaans my native tongue. My mother came from an English-speaking family and in our home both English and Afrikaans were spoken. The village I grew up in was primarily Afrikaans-speaking and this was also the language used at school. But at home we were surrounded by English books, I read almost exclusively in that language and my first attempt at poetry was also in English.

Elisabeth Eybers, about her connection to Afrikaans

Eybers lived her day-to-day life in Dutch but basically refused to write poems in it. That stubbornness was enormously appealing to me: it was a good reminder of the necessity of independence to poets.

The Leiden group Street Fable put this poem to music

The first word classes people learn
before the age of three last them a lifetime
to formulate their utmost, acute needs
like: I am hungry … I love you … am tired

Suddenly ripped from that sweet encounter
they have discovered a new meeting place
in which over and over, mad with bliss
can be made clear sufficiently: you and I

A month has passed - for time will tell - they use
closely-woven sentences with no effort at all
those conjunctions of artful deflection
like: however … although … nonetheless ...

This entry was written by Eep Francken in collaboration with Taalmuseum. The translation into English is by Anne Oosthuizen. The following publications were consulted: