Listen to this poem in Dutch.
Voiced by: Graziella Rais

Everyone can grow to be beautiful. Newly born, the starling is only an unsightly little creature, barely appearing to be viable. But it does not take long before the bird is proudly flaunting its beautiful, dazzling feathers. It seems that this poem wants to convey that such a triumph is not only reserved for the starling: humans, too, can develop like that.

Judith Herzberg is the daughter of Jewish writer and lawyer Abel Herzberg and grew up during the Second World War. In 1941, she managed to escape an internment camp. She survived the rest of the war by going into hiding at several different places, but became marked for life. Talking about this period is impossible for Judith Herzberg, but writing is not. In her plays and poetry, the war is a recurring theme.

On 6 May 1961, Herzberg’s first poem was published in the Dutch magazine Vrij Nederland. Two years later, her first collection Zeepost (‘Sea mail’) was published. She showed much attention for the ordinary, just like her contemporaries Rutger Kopland and Ida Gerhardt. It became a common thread in her work: when she received the P.C. Hooft Award, a prestigious Dutch literary achievement award, the jury lauded her for the way her poetry managed to transform the most ordinary things into something special.

Besides a celebrated poet, Judith Herzberg is also a successful playwright and scenarist. She received multiple awards for her works, including the culturally oriented Joost van den Vondel Award (1984) and the literary Constantijn Huygens Prize (1994). In the eighties, Judith Herzberg moved to Israel. Since then, she has alternated living in Amsterdam and Tel Aviv.

This poem can be interpreted as an ode to the starling. With ornate language, Herzberg sings of the helpless baby starling, colorless and featherless, that grows up to be an extraordinary, promising bird. As Herzberg herself describes it: a ‘high warm-footed scholar’ and a ‘flying unlettered triumphator’.

The animal in this poem is almost presented as a human, something not uncommon in Herzberg’s poetry. After all, a newborn human is as vulnerable as the poem’s baby starling. And just like the starling, every human grows into an independent individual with a future. That is the valuable message of this poem: everyone has the potential to grow into something beautiful or grand.

The use of language in this poem is noteworthy. Creative lexical combinations such as ‘frivolous-throated’ and ‘pearl-splattered’ turn something ordinary such as the starling into something special. Language and content are also tightly interconnected to each other. At the start, when the baby starling still counts for little, Herzberg uses ordinary, everyday words. In the second stanza, when the starling’s development is described, the language changes. It becomes more eccentric and expressive and the words are all but everyday language. Not only the starling has developed, the language has too!

In 1970, the poem Spreeuw (Starling) was published in the Dutch literary magazine Hollands Maandblad along with three other poems. A year later, it could be found again in the collection Strijklicht (‘Slanting light’). Many of the poems in this collection are about nature. Besides the starling, Herzberg also wrote poems about the gull, the jackdaw and the common swift. 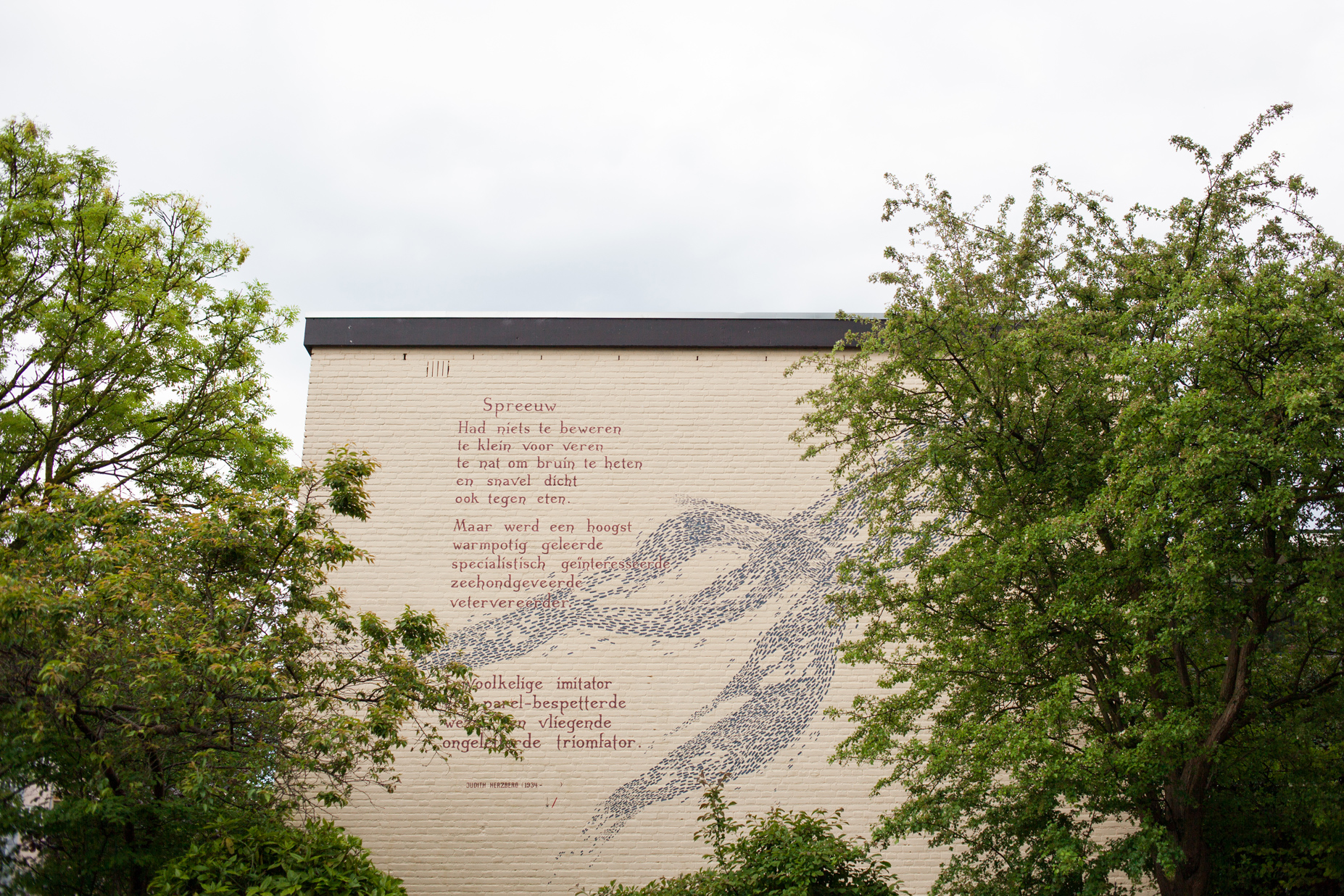 In 1997, the year Herzberg received the Dutch literary prize the P.C. Hooft Award, the poem was painted on the wall of Boshuizerlaan 5 in Leiden. The wall poem nicely fits the name of the building: Vogelvlucht (‘Bird flight’). The poem was renovated in 2008 and the design was modified: wall poem painter Jan Willem Bruins enriched the wall poem with an illustration of a flock of flying starlings.

Judith Herzberg herself could often be found in Leiden in 1986-87, because she was affiliated to Leiden University as a guest writer during those years. She gave lectures and tutorials on writing poetry, plays and film scripts.

It is the language, and the awareness of it, that makes Judith Herzberg’s poems so ‘ordinary’ and at the same time so surprising.

The small and seemingly self-evident gets a whole other status in the Herzbergian world.

Had nothing to contend
too small for feathers
too wet to be called brown
and beak closed tight
even against food.

This entry was written by Het Taalmuseum in collaboration with Nikki Spoelstra. The translation into English is by Emma Knapper. The following sources were consulted: