Listen to this poem in English.
Voiced by: Jack Smith

Is death something to be afraid of? It has been looked at like this for centuries. At John Keats’s brother’s deathbed in 1814, the poet captured his view on life and death in this poem. They are two sides of the same coin. So it is surprising that people are sometimes so frightful of death that they forget to enjoy life.

John Keats lived a short and tragic life. At the age of eight, he saw his father get trampled by a horse and die. A few years later, he lost his mother to tuberculosis. His brother also fell sick and Keats took care of him for years. In doing so he also picked up tuberculosis, and as a result he could not marry the girl he loved.

Keats had financial problems his entire life. He started a literary education, but traded this in for a medical education and became a pharmacist. On the side, he continued writing and published his first collection, Poems, in 1817. The collection was well received and brought him into contact with several prominent writers and poets.

In 1820, his health deteriorated. His doctors advised him to go to Italy. To no avail: he died in February 1821, at the age of 25. In the decades after his death, his work became more and more appreciated. His letters too, in which he spoke of matters such as the meaning of poetry, belong to the British literary canon.

On death is a short poem about death, which was never far away in Keats’s life, as can be read in the first part: death (sleep) and life (dream) are not so different. According to this poem, death in itself is not something to be afraid of, it is a part of life. Sometimes, it even brings comfort and the end of suffering.

Keats wrote poetry at the start of the 19th century, at the peak of romanticism. This movement opposed the standardization initiated by industrialization and was looking for those things in life that were human and natural. The fact that Keats points to the circle of life and death and makes the comparison between sleeping and dreaming fits into this tradition.

In 1814, John Keats wrote this poem for his brother, who suffered from tuberculosis and his days were numbered. Keats had taken care of him during the preceding period and in doing so, he picked up that same disease, of which their mother had already passed away. Even though a lamentation would be in place, this poem is no such thing: On death is an relativizing poem which mostly clarifies that death is a part of life. 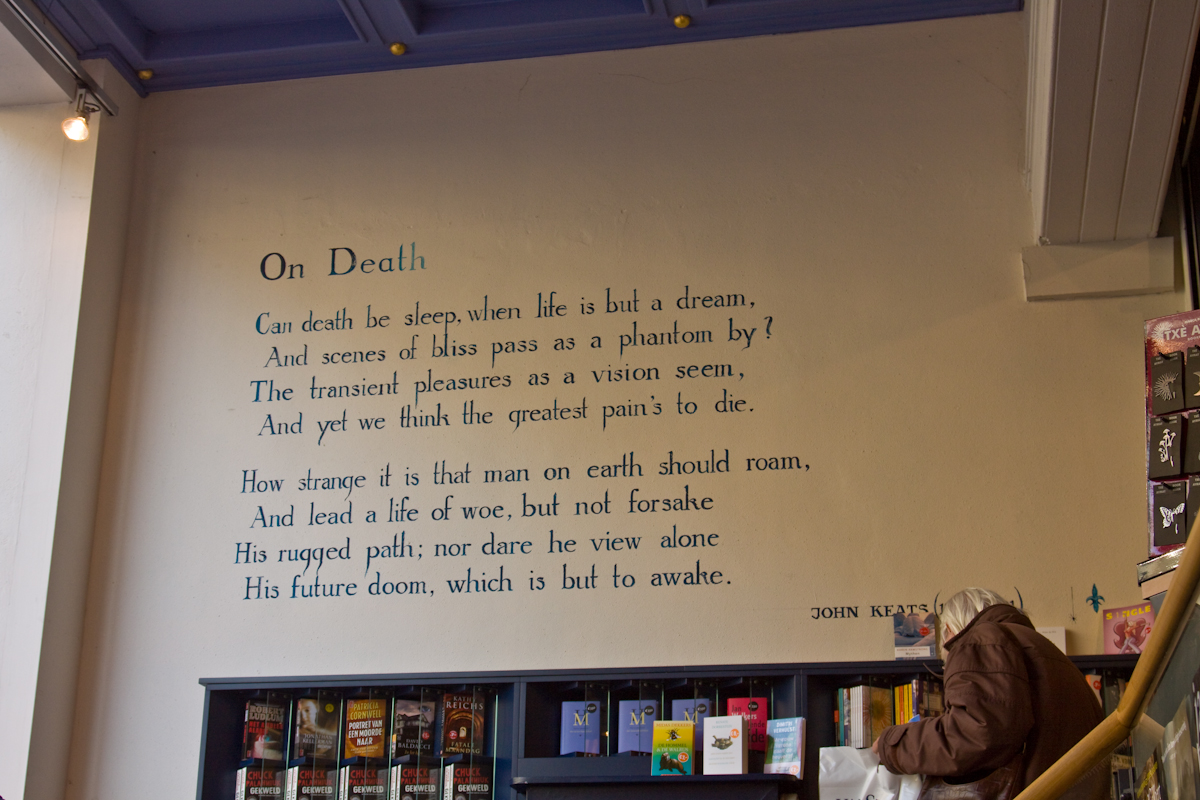 Here lies One / Whose Name was writ in Water

On his deathbed, John Keats dictated the text for his gravestone

I.
Can death be sleep, when life is but a dream,
And scenes of bliss pass as a phantom by?
The transient pleasures as a vision seem,
And yet we think the greatest pain's to die.

II.
How strange it is that man on earth should roam,
And lead a life of woe, but not forsake
His rugged path; nor dare he view alone
His future doom which is but to awake.

This entry was written by Het Taalmuseum in collaboration with Robert Clark. The translation into English is by Jasmijn van Dongen. The following sources were consulted: