Listen to this poem in German.
Voiced by: Christoph Pieper

Paul Celan, a German-speaking Romanian of Jewish descent, who lost his parents during World War II, felt strongly connected to the Russian poet Osip Mandelstam. They had similar backgrounds, and Celan admired Mandelstam’s poetry. In this poem, Celan expresses how he completely identifies with Mandelstam.

Paul Celan was a German-speaking Romanian of Jewish descent who spent the first part of his life living in Cernăuți, in the former Kingdom of Romania (now Chernivtsi, Ukraine). Because of his Jewish background it was difficult for him to study in Romania and thus he left for France in 1938. He traveled via Berlin and was there during the events of the Kristallnacht, when the Jewish population was violently attacked on a large scale. Two years later, his studies were interrupted by the German occupation. His parents were deported to an internment camp in 1942, which neither survived. Celan himself managed to flee a work camp and survived the war. Throughout his life, he coped with an immense guilt towards his murdered parents.

Love in Vienna and Paris

After the war, Celan resumed his studies in Bucharest and worked as a translator of Russian literature into Romanian. His own poetry was inspired by Russian literature and he published his first poetry collection in 1947. With the emergence of the communist regime in Romania, Celan fled to Vienna and eventually moved to Paris in 1948, where he would live for the rest of his life. In Vienna, he met writer Ingeborg Bachmann, with whom he was romantically involved until the early 1950s. He ended up marrying Giséle Lestrange, a graphic artist he met in Paris.

In 1960, Celan was publicly accused of plagiarism by Claire Goll, who claimed that Celan had copied the work of late husband - Yvan Goll. While Celan had indeed translated some of Golls poems, the allegation was unjust. However, the accusation weighed heavily on Celan as it kept haunting him to the point that he started to suffer mentally. In 1965 he was admitted to a psychiatric hospital after he had tried to kill his wife in a frenzy. He remained there until June 1966. A year later, the divorce was finalized.

On 1 May 1970, Paul Celan’s body was found in the Seine. It is unclear how and when he died, but it is generally assumed that Celan threw himself of a bridge into the Seine on 20 April and thus committing suicide by drowning.

In this poem, Paul Celan writes how he, during a visit to a circus in Brest, felt connected with the poet Osip Mandelstam.

Paul Celan had a special bond with the circus as, for him, it symbolized fantasy and change - the world within the circus tent was radically different from the one outside the canvas. Celan saw the circus as a place for people without a home, a category he felt he fit into. Another ‘member’ of that category would have been Osip Mandelstam, who Celan had imagined in the circus tent and who had felt constantly haunted after the Russian Revolution and eventually died in a gulag.

The circus performance starts with a tiger leaping through hoops of fire. With this image, Celan refers to the destruction of Brest during World War II. The circus brought back memories of war. In the second stanza, he mentions the gunboat “Baobab.” There was, in fact, a boat in the harbor named Baobab, but this was just a tug boat. During the war however, Brest had been a military harbor. Twice, Celan hears ‘finite singing,’ meaning he thought about war and death.

The third stanza opens with a salute to the tricolore - the French flag, which had the same colors as the Russian flag prior to the Revolution. He salutes with a Russian word. With this, he indicates that at the end of the performance, as the flag was being hoisted, Celan completely identified with Mandelstam. Though Mandelstam had passed away, he lived on in the heart of Paul Celan. That heart is described in the last line as a “a place made fast,” or a citadel.

Early 1960, Celan and his wife Giséle Lestrange often spent time in Brittany, especially in the village of Trébabu and the surrounding area. Here, he found the peace and quiet he was missing in Paris. Many poems of this period are based on impressions of this area; for example, the poems tell about a menhir or a graveyard which he passed during his one of his walks. Nachmittag mit Zirkus und Zitadelle (Afternoon with a Circus and Citadel) was also written during his stay in Brittany. Celan wrote it after he attended a circus performance with his wife and son in 1961. 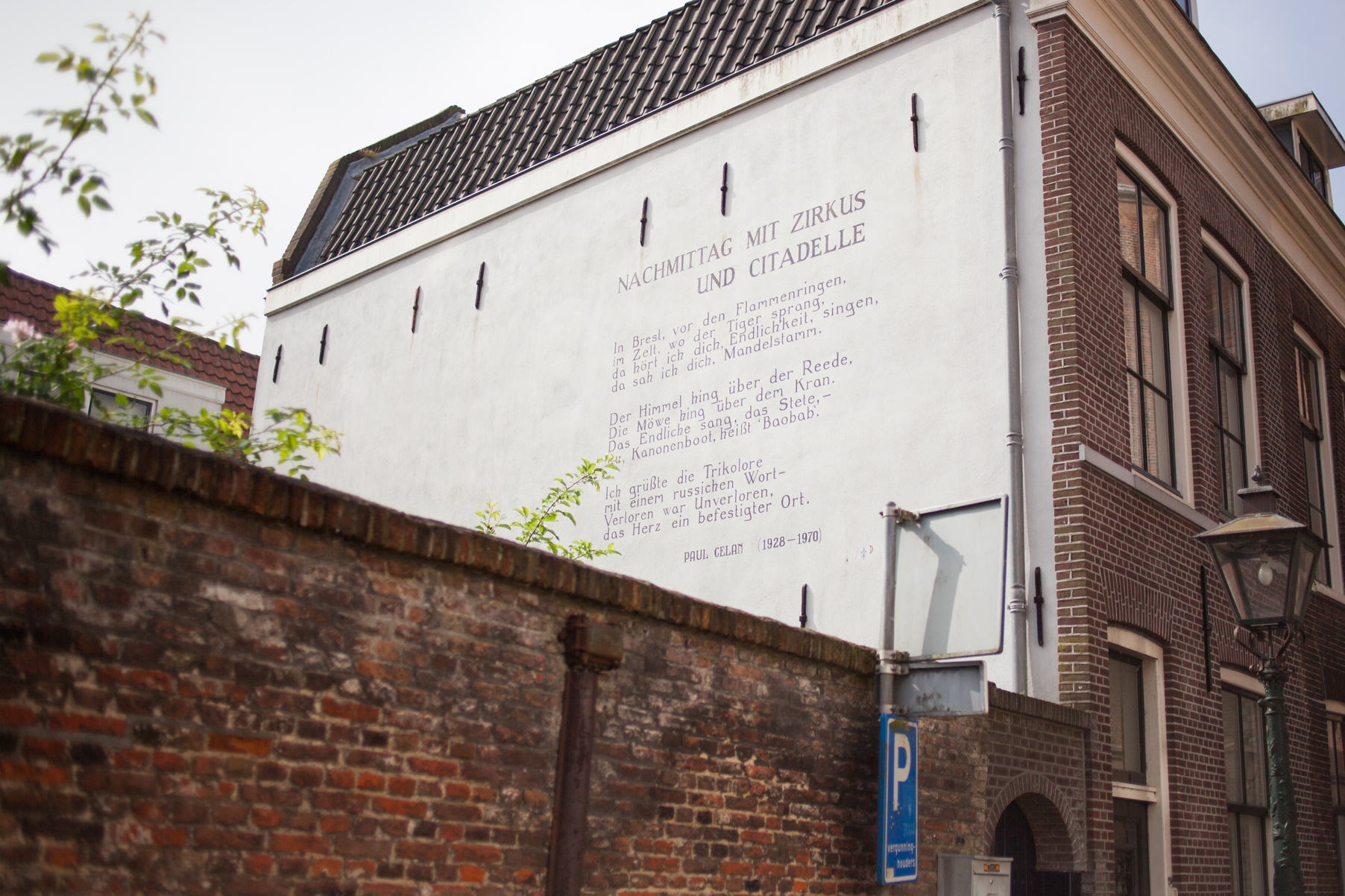 This wall poem was realized in 2003. Unfortunately, two small errors have crept in: in the title “Zitadelle” is spelled with a “C” and in the third-to-last line “russichen” is written instead of “russischen.” This poem was selected by Hetty Leijdekkers and Jan Willem Bruins. Both their signatures, a fleur-de-lis of Leijdekkers and a crescent moon of Bruins have been painted below the poem. A poem by Mandelstam, mentioned in the first stanza, had already been painted on a Leiden wall.

Paul Celan plays a big part in post-war poetry in Germany. The question of how one could still write poetry after Auschwitz was answered by Celan: by focusing completely on language and by always allowing for multiple interpretations. This was of the utmost importance to Celan, especially since he wrote poetry in the language spoken by the murderers of his parents. Language remained largely the same, in spite of all the changes that people had lived through.

By allowing multiple interpretations, Celan showed that the strength of language and of poetry lies within its vastness.

this Death is a master from Deutschland

A line from Todesfuge (Deathfugue), one of Paul Celan’s most well-known poems

Afternoon with a Circus and Citadel

In Brest, before hoops of flame,
in the tent where the tiger leapt,
there, Finite, I heard you sing
there I saw you, Mandelshtam.

I saluted the tricolore
speaking a Russian word -
things lost were things not lost,
the heart was a place made fast.

This lemma was written by Het Taalmuseum in collaboration with Chris Flinterman. The translation into English is by Demi van de Wetering. The following publications were used: