Listen to this poem in Russian.
Voiced by: Natalia Baraban

By the end of 1930, Osip Mandelstam returns to Leningrad. The scents and colors of the city remind him of passed times, when it still bore the name Petersburg, his friends had not been arrested yet and he was not tormented by poverty and fear. Now, fear has begun to take control of his life so much that it keeps him up at night. For all he knows, the regime might be standing in front of his door this night.

Mandelstam is considered to be one of the greatest Russian poets of the twentieth century. He was internationally orientated and regarded himself as part of a European ‘world culture’. Like his friend Anna Akhmatova, Mandelstam was inspired by classical poetry and was part of the acmeist movement. Mandelstam regarded his poetry as a message in a bottle; even though he did not know his readers personally, they had to understand what he wanted to say, and should not interpret his lines as a sermon.

From 1911 to 1917, Mandelstam majored in Philosophy at the university of Saint Petersburg. During this period, he successfully debuted as a poet. The Russian Revolution (1917), however, turned his life upside down. Due to his Jewish heritage and his sharp pen, the communist establishment considered him a threat and made it difficult for him to publish his works. Mandelstam tried making ends meet by writing children’s books and by translating classical works from Western literature. In his first writings after the revolution, a panicky undertone can be discerned. The poetry collection he compiled in 1928 reflects complete upheaval.

The final years of Mandelstam’s life were a sequence of persecutions, search warrants and arrests. He was exiled to Cherdyn, and after another arrest he was sent to a Gulag where he died from exhaustion. His works, which were accused of harboring anti-Soviet views, had almost disappeared entirely. The fact that his poems can still be read nowadays is due to his wife Nadezhda as Mandelstam, often pacing up and down the room, dictated the poems to her. She wrote them down in notebooks and learned them by heart. Since the 1960s, his works have been rediscovered because of her efforts and the poems have gained international fame. Readers appreciate the rich imagery and metaphors, which often make his works so difficult to translate.

In this poem, Osip Mandelstam returns to Leningrad, the city he knows as his “own old tears, [his] own little veins, the swollen glands of childhood.” December has arrived; the days are short. The brown and yellows of the weak winter sun evoke the memories of fish-oil and tar of the harbor. Mandelstam remembers past times: Leningrad still bore the name Petersburg, and he could reach his friends through telephone numbers and addresses: they have all been arrested now. He himself lives in poverty and anxiety. His nerves and temples jangle and he writes that he waits until morning for ‘dear guests’ who rattle the hinges like chains, as is written in Russian: the feared Soviet secret police ready to lock him away.

The strength of this poem partly lies in its form. With only a few metaphors (egg-yolk: the sun? Tar: the color and scent of the harbor?), Mandelstam draws up a color palette which allows one to envision the city in winter weather and experience his desperation and sorrow. Technically, it is an impressive poem in terms of regularity. Leningrad consists of seven stanzas with two lines. The lines are written in anapestic tetrameter: four times the meter of two unstressed syllables followed by one stressed syllable. This is combined with repetition: words as “return” and “Petersburg” occur twice. The fixed structure does not only make it a powerful poem content-wise but also sound-wise.

In 1930, Mandelstam resided in Armenia where he found an old-fashioned, lively culture which contrasted with the oppressive environment of the Soviet Union. This served as inspiration for his collection of poems Journey to Armenia, in which the importance of “eternal” cultural values serve as common thread. The communist establishment regarded this as an attack against their cultural politics and prohibited the publication of his work.

Mandelstam returned to Leningrad in December 1930. It was the city where he had grown up and attended university when it was still called Saint Petersburg. It was in stark contrast to Armenia, where he had felt free, had rediscovered his confidence and had started writing poetry for the first time in years. In Leningrad, on the other hand, disillusionment and fear awaited him. 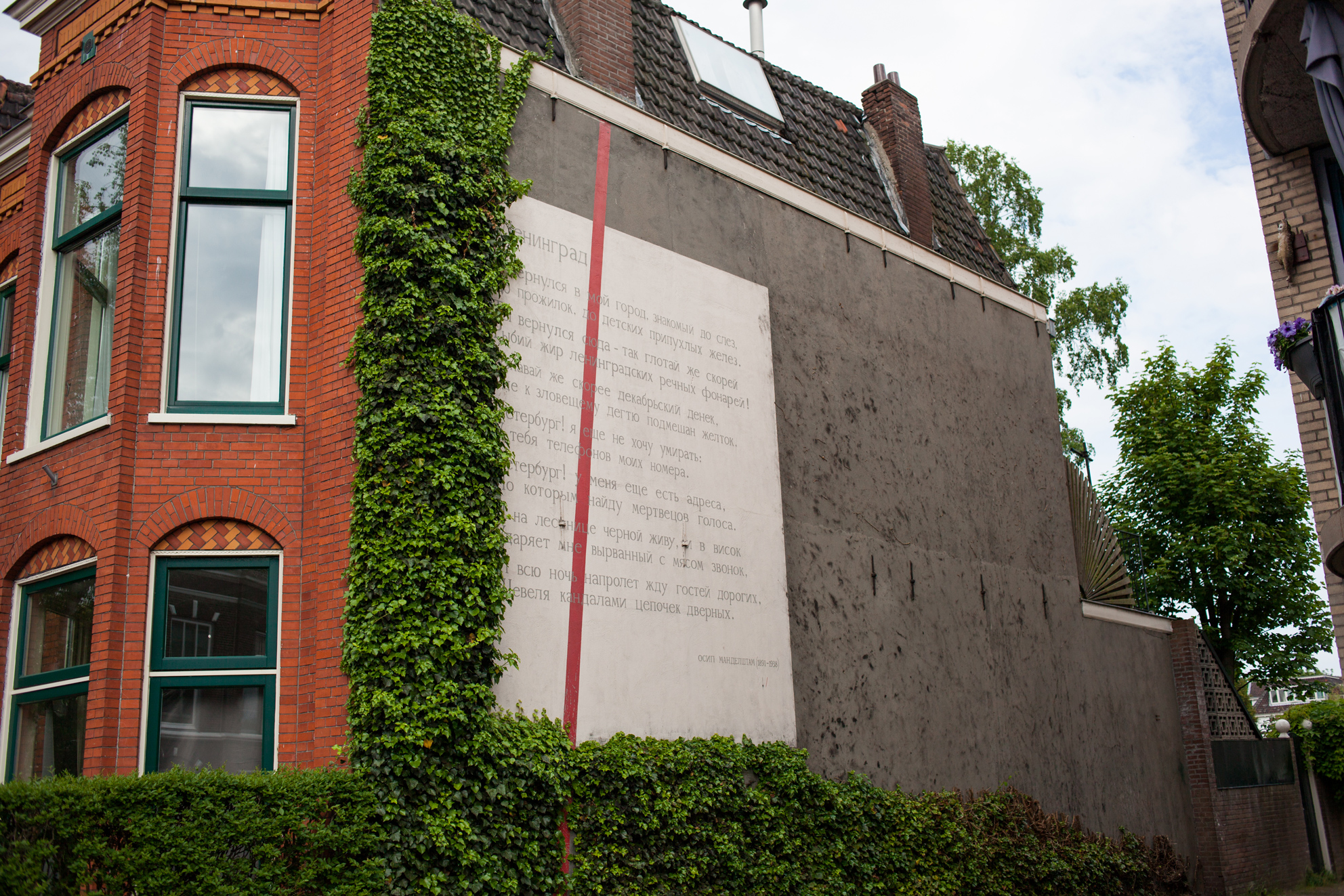 This poem adorns the wall at Haagweg 29. A red and slightly diagonal line functions as the background of this wall poem. This is a blow-up of Ben Walenkamp’s signature. When this poem was painted in 1997, Walenkamp and Jan Willem Bruins (signature: the small spider) had been collaborating for five years to realize poems on the walls of Leiden. The red line is Bruins’s homage to his associate. It is no coincidence that the red line was painted right through a Russian poem as Walenkamp is rather fond of Russian poetry dating from the late nineteenth and early twentieth century.

Poetry is of great significance in Russia. According to Pieter Zeeman, who wrote a dissertation on Mandelstam, the poets had been proclaiming another truth than the established one for centuries. Mandelstam did so as well; he refused to lend his name to communist propaganda and eventually had to pay for this with his life. For years, his work was only known in private circles.

The memoirs his widow Nadezhda Mandelstam wrote in the 1960s impressed the international public and fostered their interest for the work of Osip Mandelstam. Transcripts of dozens of unknown poems by Mandelstam, which were carefully retained by his wife, started to circulate around Russia. Russian emigrants in the United States realized a tripartite publication which collected both Mandelstam’s initially published work and the new transcripts. These ‘clandestine’ collections were sent to the Soviet Union and Mandelstam was rediscovered as one of the greatest poets of the twentieth century.

Mandelstam’s work is often considered difficult as the poems generally allow multiple interpretations and he uses only a few words to sketch a new world. He appeals to the reader’s fantasy to color in the image he created. Although the last line of his poems is often considered the most important one, the significance is sometimes understood only after repetitive reading or listening. Russians who do not understand the meaning can still enjoy the poems, as the rhythm and sounds in the original language have an almost immediate, dream-like hypnotic effect. This is the first thing that is lost in translation.

Only in Russia is poetry respected, it gets people killed.

His poetry consists of dreams, utmost original dreams which completely belong within the field of art.

Poet Alexander Blok wrote this down in his journal (1920) after he saw a performance of Mandelstam. One of Blok’s poems can be found in Leiden as well

Poetry is the plough that turns up time in such a way that the abyssal strata of time, its black earth, appear on the surface.

Allowing his talent to become subject to a task was impossible for Mandelstam. He was, no matter how hard he tried, mentally not able to produce an eulogy on Stalin, which was meant to save his life.

Mandelstam was one of the most fascinating conversation partners: he pleaded not to listen and answer to himself, as nowadays. He was polite, sophisticated and different in each conversation. Never have I heard him repeat himself or whistle old tunes.

Even before the reign of terror started, Mandelstam had already found the words to express it; in poems with a maximum of twenty lines, the abundance of meter, rhythm, sound, imagery and associations adds significance to the content, which on its own is already quite profound, and makes these poems the highlight of the Russian poetry of the twentieth century.

I’ve come back to my city. These are my own old tears,
my own little veins, the swollen glands of childhood.

So you’re back. Open wide. Swallow
the fish-oil from the river lamps of Leningrad.

Open your eyes. Do you know this December day,
the egg-yolk with the deadly tar beaten into it?

Petersburg! I don’t want to die yet!
You know my telephone numbers.

Petersburg! I’ve still got the addresses:
I can look up dead voices.

I live on back stairs, and the bell,
torn out nerves and all, jangles in my temples.

And I wait till morning for guests that I love,
and rattle the door in its chains.

This entry was written by Het Taalmuseum in collaboration with Carmen Barnhoorn. The translation into English is by Demi van de Wetering. The following publications were consulted: