Listen to this poem in Russian.
Voiced by: Zina Anisimova

Writing poetry requires inspiration, which Anna Akhmatova drew from the age-old European tradition built on the pillars of the Classical Era and the Renaissance period. Being a member of the aristocracy of Saint Petersburg, it had always been part of her education. After the Russian Revolution, however, elite culture was controversial. The communist regime dictated that she was no longer allowed to publish her work. Dante, the fourteenth-century poet who features as her idol in this poem, was therefore no longer just a role model. She recognized herself in his life story, which was also full of clashes with authority, and saw him as a kindred spirit.

Although many of Anna Akhmatova’s earlier poems are about love, they are far from sugary or languid. The poet described the obstacles she encountered in her relationships and the pain of break-ups. Akhmatova was somewhat of an expert: she married three times and once said all three had been unhappy. After the Russian Revolution (1917) her work became more societally critical.

Akhmatova was born as Anna Gorenko. At age 17, she took on the pen name Akhmatova, after a distant relative; a Tartar princess. She grew up in an aristocratic family that was very Europe-oriented. This is reflected in her poetry. The art movement she established with her first husband - acmeism - draws heavily from classical European poetry. They endeavored to describe the world as it is, clearly and concretely, without the use of opaque language.

After the revolution, Akhmatova stayed in Russia. Although her poetry was hardly politically charged, the communist establishment disliked its religious elements and references to the European tradition and Greek mythology. She was barely able to publish anything, but kept writing poetry. Her work became more and more critical. Akhmatova drew from her own experience with Stalin’s reign of terror: her first ex-husband was executed, her third husband died in a Gulag and her son was held captive for 18 years. She described her experiences as an aggrieved mother and wife in the poem Requiem, which is generally considered a masterpiece.

After the death of Stalin in 1953, Akhmatova’s works were slowly gaining appreciation. She published several poetry collections, wrote a memoir and received international recognition. In 1964, she was awarded the Etna-Taormina prize, at which event judge panel member Ingeborg Bachmann wrote her a poem that can also be found on a Leiden wall. Nowadays, Anna Akhmatova is generally recognized as one of Russia’s greatest poets.

It is late, and Akhmatova awaits her muse. In the Classical Era, the nine muses were the goddesses of the arts. Those who wanted to write, sing or perform, would call upon one of them for divine inspiration. Akhmatova holds out hope for Euterpe, the muse of poetry, who carries a wind instrument; in this poem a rustic pipe. It is uncertain whether or not she will make an appearance, that is: Akhmatova doubts her own inspiration. When she does appear, all vanity and daily trivialities evaporate (here: honors, youth and freedom). The only thing that remains is the desire to write exquisite poetry. For Achmatova, the absolute goal was Dante’s Inferno.

In her works, Anna Akhmatova repeatedly drew inspiration from Dante. As an acmeist she was fascinated by classical authors. In Dante, she recognized not only an example of supreme quality, but also a kindred spirit. He grew up in Florence, which to Akhmatova seemed not unlike the Saint Petersburg of her childhood, and then clashed with the established authority. He was banished, but proudly refused to wear the hair shirt. By writing about Dante in the time of Stalin, Akhmatova was able to subversively critique Soviet society.

Anna Akhmatova wrote this poem a few years after the Russian Revolution, when it was becoming increasingly difficult for her to publish her work. During these years, she studied the Bible and the works of canonical European authors such as Shakespeare and Dante. These were her personal interests, but they were easily perceived by the leadership of the budding Soviet Union as acts of rebellion. After all, artists were expected to propagate communist ideals, and those who dabbled in the ‘bourgeois’ arts were suspect. In this poem, Akhmatova did exactly that which rubbed the communist establishment the wrong way: she inserted herself in the classic European tradition of Dante. 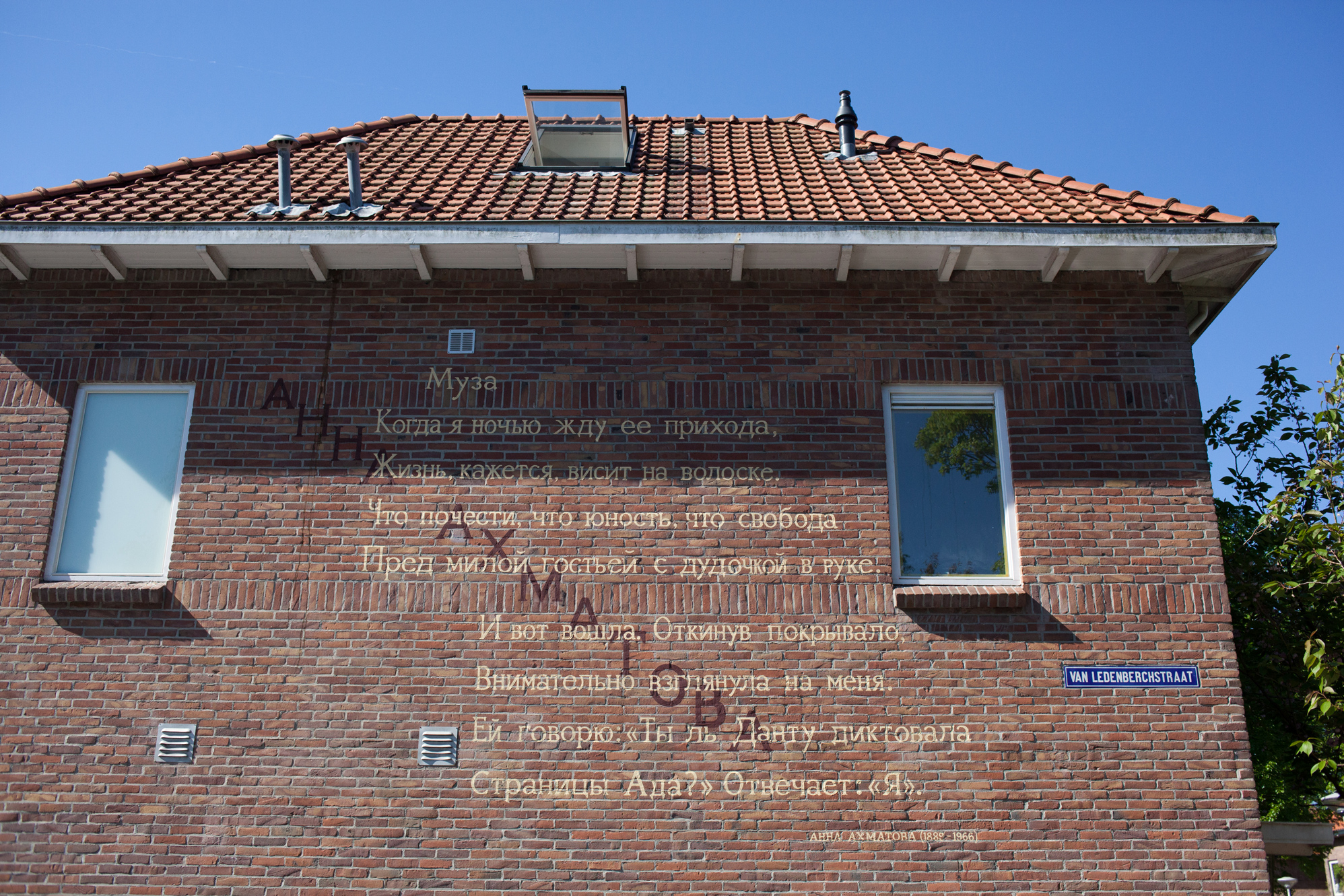 Akhmatova’s poem, which was applied to the corner house at Johan de Wittstraat, did not receive a warm welcome in the neighborhood. This had little to do with the poem itself, but more with its design; the bluish-purple background was certainly not to everyone’s taste. This caused a bit of a commotion. One Leidener complained: “I have wanted a small dormer on my house for some time now. On my own house, mind you. And what do I get? Only obstruction by the city council. But now, apparently, it is alright for any doggerel writer to scribble away on the walls whenever they feel like it. It is not fair.”

A few years after The Muse was painted onto the wall, its prominent background color was removed. This was part of an agreement with the city council. Although the application of text is covered by the freedom of speech act, their artistic design requires a permit. The city council stated that, provided TEGEN-BEELD Foundation promised to give future wall poems a ‘less extravagant design,’ the Foundation would be allowed to continue to apply the poems on Leiden walls without having to request a permit for each one.

Unlike many Russian poets and artists, Akhmatova never considered fleeing the Soviet Union after the revolution. She believed that poets were tasked with a special purpose: to give a voice to the (oppressed) people. In 1917, around the time of the revolution, she described in a poem why escape was no option for her:

I heard a voice. It came, beguiling,
It said: “Come over to me here,
It’s time to leave land, deaf, defiling,
Abandon ever Russia’s sphere.

I’ll wash your blood-stained hands before I
Extract the black shame from your heart,
Rename the pain that a priori
Of loss and ill will is but part.”

But then with calm and silence witting
With hands I covered up my ears,
So would not words so unbefitting
then sully grieving soul with smears.

Akhmatova is known as the poet who challenged an enemy regime for half a century without making concessions, although she did write a few propaganda verses in the hopes of advancing her son’s release. Akhmatova’s work holds up a powerful mirror to the Russia of the first half of the twentieth century. This is no coincidence: she strongly opposed the idea of forgetting and sweeping the past under the rug.

The widespread worship of her memory in Soviet Union today, both as an artist and as an unsurrendering human being, has, so far as I know, no parallel. The legend of her life and unyielding passive resistance to what she regarded as unworthy of her country and herself, transformed her into a figure not merely in Russian literature, but in Russian history in the Twentieth century.

When at night I await her coming,
It seems that life hangs by a strand.
What are honours, what is youth, what is freedom,
Compared to that dear guest with rustic pipe in hand.

And she entered. Drawing aside her shawl
She gazed attentively at me.
I said to her: "Was it you who dictated to Dante
The pages of The Inferno?" She replied: "It was I."

This entry was provided by Taalmuseum. The translation into English is by Anne Oosthuizen. The following publications were consulted: