Listen to this poem in Mandarin.
Voiced by: Luoyi Cai

In the poem Kexi (Too Bad), an elderly Du Fu laments about how fast he has to say goodbye to the happier days of his childhood. Just like the wilting flowers he is declining as well. Only ale and good poetry bring him satisfaction anymore.

Du Fu grew up in Gongyi, about 650 kilometers southwest of Beijing. His first poems spoke of his childhood, about the passing of time and about his surroundings’ response to his poetry. We know, for example, that his family was rich enough to pay for his education to become a civil servant, but that he failed the exam. His whole life, he wanted to be a high-ranking civil servant rather than a poet. Du Fu married when he was forty years old and the pair had five children.

In 755, when Du Fu was 43 years old and worked a not-so-important job as a civil servant, the An Lushan Rebellion broke out, which would last for eight years. He brought his wife and children to safety, but he himself was captured by the rebels. Du Fu escaped and adopted a nomadic lifestyle. In his poems, he called himself an old man and a survivor of war and famine. He also wrote bitterly about the corruption and the cruelties at the royal court and the suffering of the country’s poor population.

The last fifteen years of Du Fu’s life were overshadowed by the effects of the rebellion. He was in poor health and suffered many physical issues. Ultimately, he settled in Sichuan with his wife and children en wrote poems about a happier life. When he passed away, he left behind 1,457 poems. By far the largest part was written after the rebellion.

What’s this poem about?

In the poem Kexi, Too Bad in English, Du Fu wistfully looks back on his childhood. The flowers fall, the spring, the youth is over. Time passes too quickly and the things that brought him relief when he was younger, do not do so anymore. Only poetry can distract him now. Tao Yuanming (365 - 427), a famous Chinese poet that lived more than 300 years before Du Fu, would have understood that.

W.L. Idema, professor emeritus in sinology and translator of Du Fu’s poetry, once said: ‘Chinese poetry is often strange because it only says what it says. And what it says, often appears very to the point to a Western reader.’

Du Fu wrote this poem when he was of older age, after experiencing rebellion and war from up close.

It is quite busy in Chinese restaurant ‘Panda’ in the Kopermolen shopping centre. Mrs. Xao Ping's granddaughter is celebrating her birthday. All children and grandchildren have come together, as is tradition in Mrs. Ping’s family. She would like to have a photograph taken with everyone. Underneath the Chinese wall poem would be a great spot. Mrs. Ping is very proud to have a wall poem in her native tongue. She wants her grandchildren to start learning Chinese, but it is up to them to decide if they want to. First they have to do well in their Dutch schools. The birthday girl doesn’t want to take a picture with her grandmother, but this doesn’t bother Mrs. Ping. The wall poem is in classical Chinese, but Mrs. Ping understands what it says. However, the content doesn’t appeal to her very much. Of course, things are not the way they used to be. They weren’t, even back in the old days. Unfortunately, that’s just the way it is. 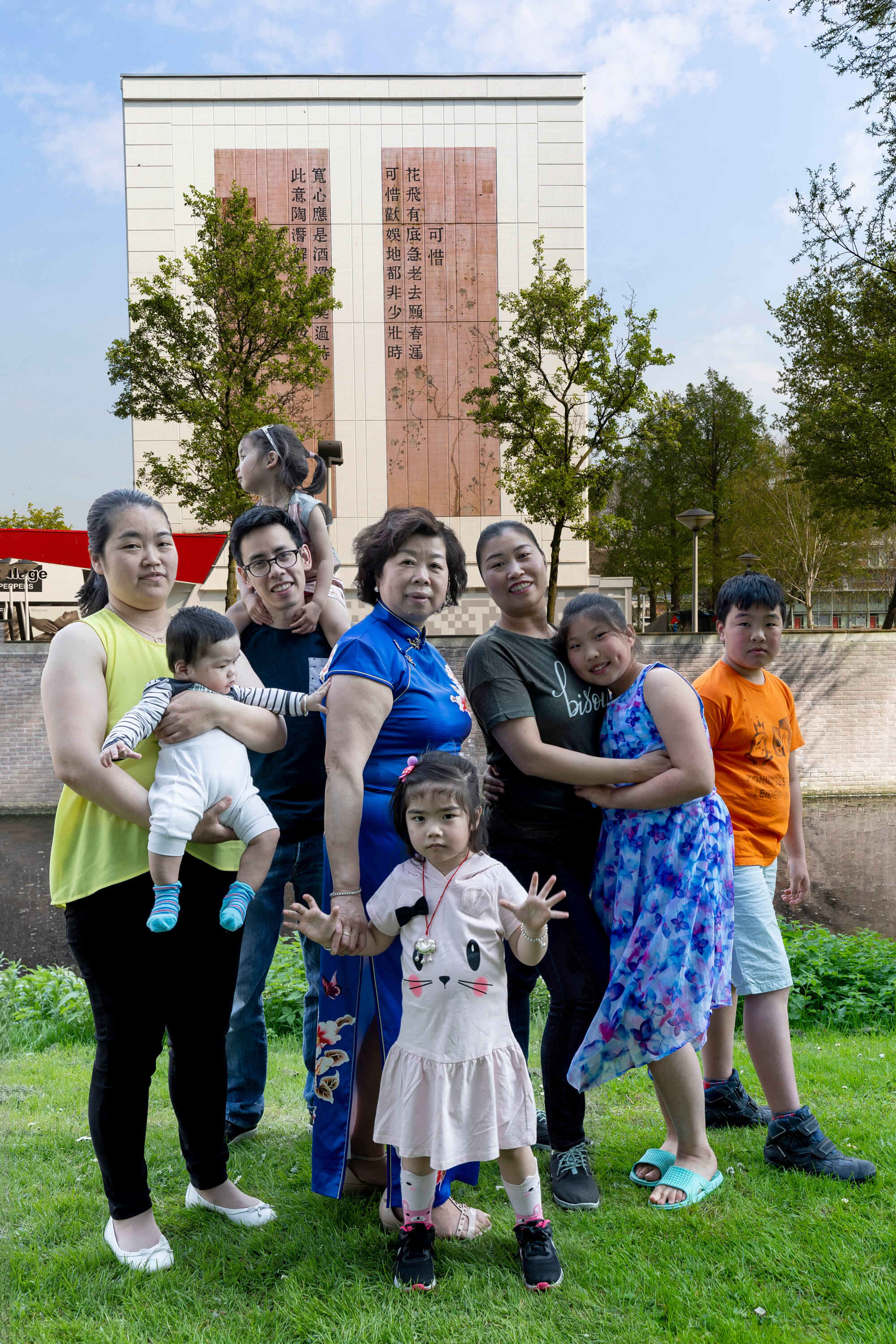 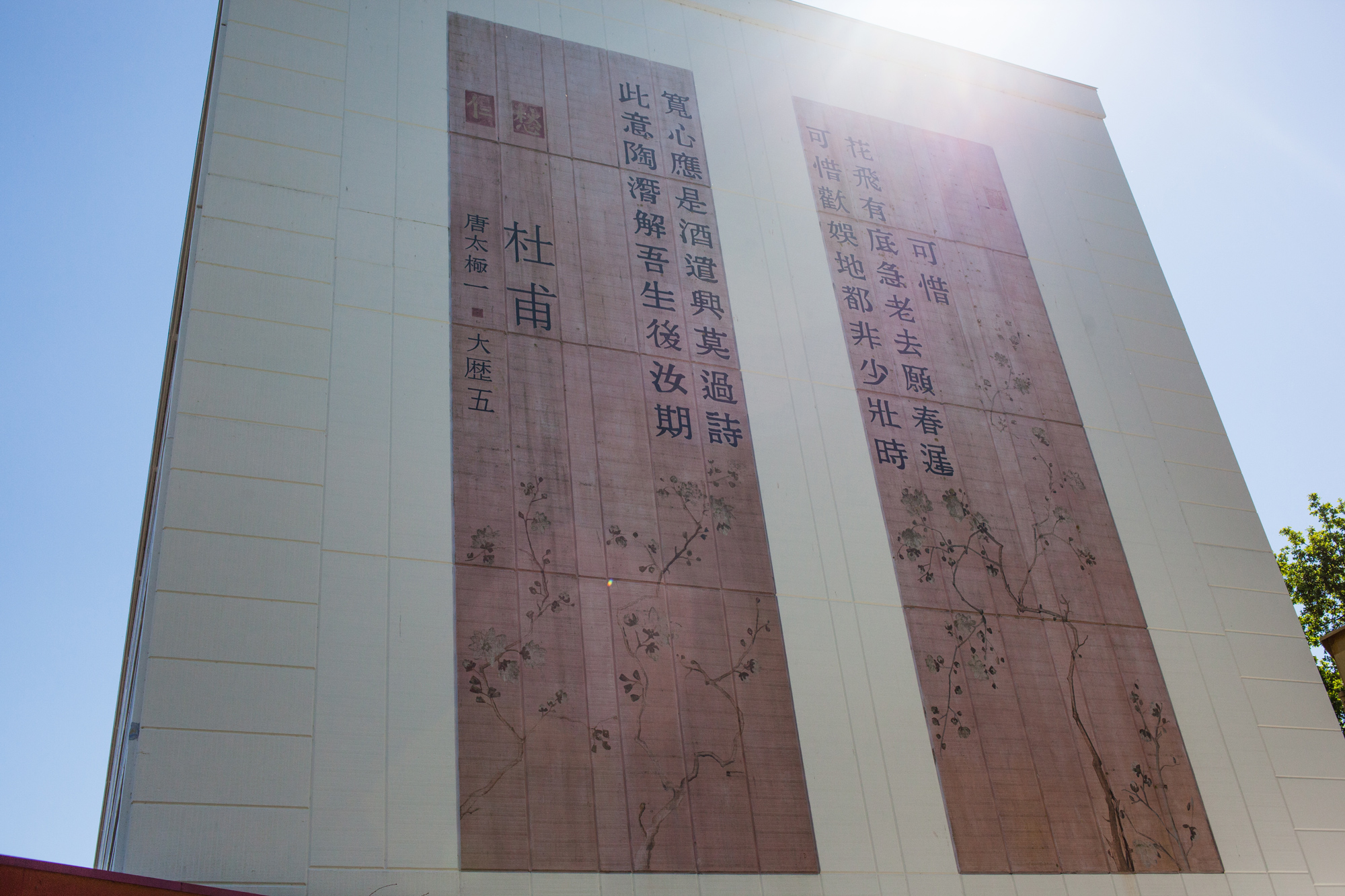 This poem was painted at Buizendhorst 22 in October 2000. It was the 79th wall poem realized by the TEGEN-BEELD Foundation. On the initiative of the working group Leiden Stad van Vluchtelingen (‘Leiden: City of Fugitives’) and in collaboration with the neighborhood community of the Slaaghwijk, the year 2000 saw the realization of five wall poems on different apartment complexes in their original languages: Turkish, Tamazight, Sarnami, Dutch and Mandarin (Chinese). Du Fu’s poem is one of these. All poems are illustrated with plants or flowers, blossoms in the case of Kexi (Too Bad).

This poem’s design may raise a Chinese eyebrow: painter Jan Willem Bruins has used a printed type style, while a similar artistic expression in China would have been calligraphed.

Du Fu saw the terrible time that war-torn China suffered, especially the pain and suffering amongst the ordinary people, and the court running away from the capital.

They are as important in Chinese literary history as Shakespeare is to people in Britain.

Historian Yuan Haiwang, author of the book This Is China: The First 5,000 Years about Du Fu and Li Bai

I have saturated myself with his poetry for thirty years. I am sure he has made me a better man, as a moral agent and as a perceiving organism.

You can watch a short video about Du Fu’s life here.

How come flowers are in such a hurry to fall? -
Getting older, I want spring to slow down.
Too bad that spots of pleasure and joy
are not at all as they were when I was young and strong.
To ease the mind there's only ale,
nothing excels poems for expressing my mood.
Tao Qian understood what I have in mind,
but I was born after him.

This entry was written by Het Taalmuseum in collaboration with Hansje Weijer. The translation into English is by Emma Knapper. The following sources were consulted: