Writers publish books to share their work, to spread their name and to immortalize their words. But how do these words affect the reader? Do they stir up certain emotions or encourage the readers to act? Leo Vroman thought about this in 1964, when he had already published fourteen books yet remained humble. He was always pleasantly surprised when someone ended up slightly more cheerful after reading his work.

Leo Vroman is one of the most famous Dutch poets, but has only lived in the Netherlands for a small part of his life. Vroman was Jewish and fled via England to the Dutch East Indies (present day Indonesia) four days after the Nazi invasion in 1940. He hoped to continue his academic degree in biology, but instead ended up in an internment camp when the Japanese conquered the country. Vroman eventually survived four camps spread throughout the Dutch East Indies and Japan. Poetry helped him to endure this awful period; he wrote a large part of his works between 1940 and 1945. World War II is also a significant theme in his subsequent work.

In 1947, Leo Vroman emigrated to the United States. Even though he lived in the US for most of his life, he continued to write in his mother tongue. Vroman was the youngest poet ever to receive the P.C. Hooft-prize in 1964.

Vroman became a well-known poet in the Netherlands, but in the US he primarily worked as a scientist. He obtained his doctorate in biology and did a lot of research on phenomena of blood clotting. One of these phenomena was even named after him: the Vroman-effect. Vroman was convinced that poetry and science both involve examining and discovering. He often tried to reconcile poetry and science in his works, for example in his poems Biologie voor de jeugd (Biology for the young) and Mens (Human).

The poem In veertien boeken (In fourteen books) is about authorship. When Leo Vroman wrote it he had already published fourteen books. Obviously, his name was written on the cover of these books, and the words that followed - the content - were also “petrified,” or immortalized. Of those thousands of words, which were the ones that truly affected the reader? Leo Vroman poses this question in the poem.

Vroman wonders which words contain the power to rouse emotions. To open the curtains or even to laugh again or to go out. “Even with heads hanging low” indicates that the tiniest effect will feel like a reward to the poet. It is the reaction every poet secretly dreams of.

In 1965, the Dutch leading literary magazine Maatstaf released a special issue on short poems. This issue could, of course, not be published without a poem of the fifty-year old Leo Vroman, who received the P.C. Hooft-prize shortly before this issue of the magazine was composed. Among other poems, he sent in the poem In veertien boeken (In fourteen books). He presumably wrote it not long before.

The editor of the special issue wrote in his introduction: “I am convinced that whoever will look back in the year 2065 on these grubby, fuzzy, grimy times, will recognize a peculiarly strong desire for purity.” 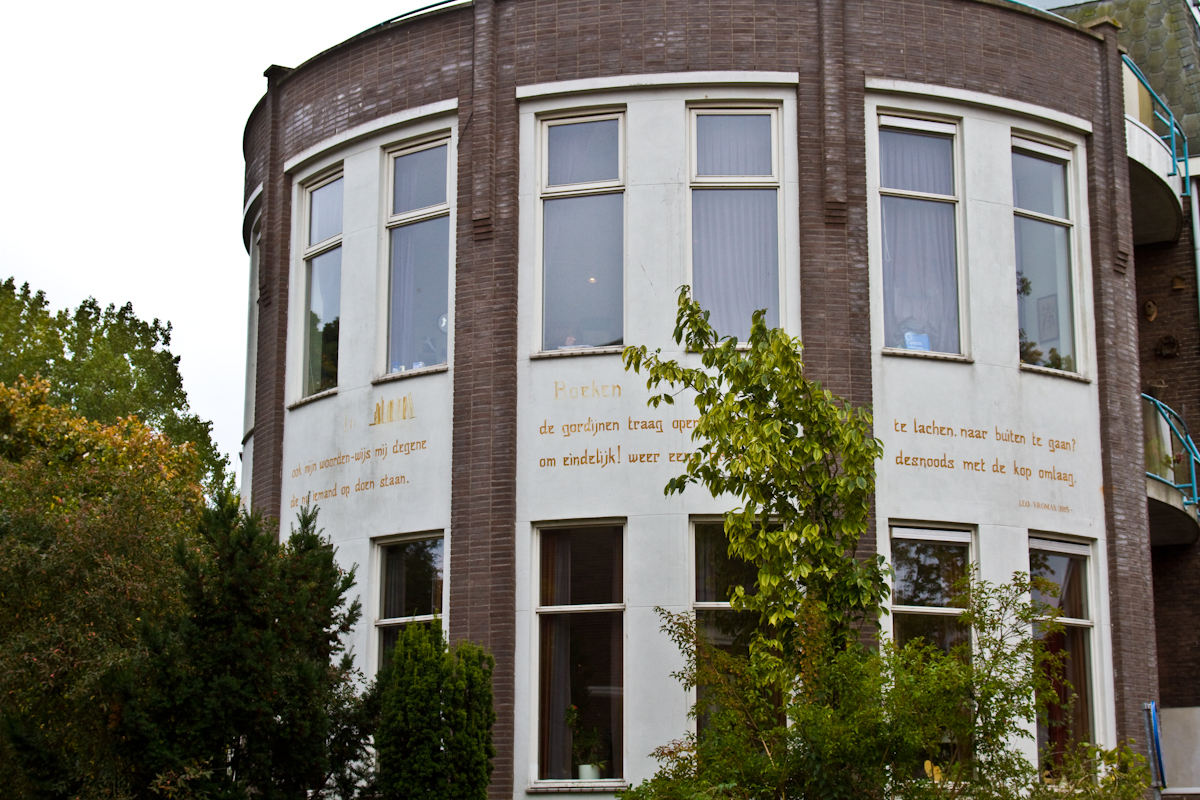 This poem was realized in 1998 on the facade of Plantsoen 1, located on the corner of Levendaal in Leiden. The word “fourteen” in the title has not been written in letters or numbers, but has been illustrated above the poem. In other words, the title of the poem is an illustration of fourteen books on a bookshelf. Unfortunately, the wall poem disappeared due to a renovation in 2017.

Leo Vroman and his readers

To Leo Vroman, poetry was primarily autobiographical. He saw his poetry as his diary. Only after his wife Tineke and his friend Max de Jong insisted on sharing his work, he decided to publish it. Vroman has always been honest and sincere about the fact that he needed the appreciation of his readers to continue writing. In the 1970s, he even stopped writing for a short period of time. Only when a young man in a restaurant complimented him on his poetry did he pick it up again.

Poems on authorship and poethood are therefore not exceptional in Vroman’s oeuvre, take for example the poems Publiek (Public,1960) and Over de dichtkunst (On poetry, 1961). His well-known poem Voor wie dit leest (For those reading this, 1945) contains a desire to observe the responses of readers: “I would like to be under this page / and look through the letters of this poem / into your reading face / and the melting of your pain is what I crave.” The crux of these poems is that poet and reader are interdependent. They need each other.

And guess, what would I be
Realist, surrealist?
Too bad, you are wrong about me:
Vroman

I think I am crying poems.

Vroman’s mind has given Dutch poetry one of the most wonderful and beautiful oeuvres. It seemed as if Vroman was writing to seize the world, to be able to touch things, to taste them.

I do not fear what is coming next. Everything is one big mystery; we don’t know what living actually is, but we have no clue what it’s like to die. I am quite curious about it, to be honest. Although I easily say that, of course. I will leave all those books behind; I can always imagine myself not being really gone.

I don’t like to be called a ‘poet.’ To me, writing poetry is as much a job as digesting.

The curtains open slowly, the window,
To finally! Be able to

Laugh again, to go outside?
Even with heads hanging low

This entry was written by Taalmuseum in collaboration with Nikki Spoelstra. The translation into English is by Rianne Koene. The following publications were consulted: