franz was
was franz?
franz.
was.
waar.
was waar.
verward.
wij.
franz, wij!
wij, franz.
u.
franz was verward.
was franz in de war?
wirwar.

Listen to this poem in German.
Voiced by: Christoph Pieper

To Konrad Bayer, a poem was, like all his other work, an experiment. Those experiments were meant to incite a reaction. In this poem, Bayer plays with the sound and meaning of words and uses these to continually mislead his audience. What is the deal with this Franz? The question remains and in the end, nothing is as it seems. There is a bit of Franz in each of us, for what do we know for certain?

When Konrad Bayer was nineteen, he made his debut on the art scene of Vienna. Three years later, he joined the avant-garde Wiener Gruppe (Vienna Group). Like them, Bayer was experimental with the use of different art forms: he wrote plays, audio drama, many poems and two novels of which one was never completed and remains a fragment until this day. Bayer used different editing and assembly techniques in all of his works: he combined texts, sentences and words, which at first sight did not seem to belong together. This makes his work fairly complex to read and is, therefore, sometimes referred to as kaleidoscopic.

Twice, Konrad Bayer took part in a meeting of Gruppe 47. In this group, the most important German writers had united to reestablish the broken traditions of German literature as well as to promote young, unknown authors. While in 1963 he was praised for his work, he received harsh criticism a year later. This weighed heavy on Bayer and shortly after he committed suicide.

Most of Konrad Bayers’s work was published after his death. By then, people were not only interested in the work itself but also in Bayer as a person. His art and eccentric way of living, his fascination with dandyism as well as his suicide, led to the formation of a cult following.

More traditional poems often had a set poetic form; they either rhymed or followed a strict rhyming scheme. Konrad felt that a new era needed a new language. This is why all of his work was first and foremost an experiment of form. He often used fragmented sentences and challenged the audience by being decisive and then by casting doubt again. Playing with sounds as well as meaning was another one of Bayer’s techniques. All of these aspects can be found in this poem.

Bayer starts this poem by concluding “franz war” (franz was). In the next line, this is called in question by “war franz?” (was Franz?) The following three lines contain only one word, franz. war. wahr. They can be read as separate words but also as one sentence (Franz was true). Just as the fog seems to lift (Bayer repeats “was wahr” (was true)) we read “wirr” (confused). The seed of confusion is planted: Did Franz exist or not?

Bayer takes it a step further by turning “wirr” into “wir” (we). He even adds an exclamation mark. All of us are Franz, until the next line in which it is make clear that there is a distinction between us and Franz “wir, franz” (we, Franz). Then follows: “ihr” (they). Bayer distances himself from Franz. This is where the confusion lies: franz war “wirr.” Again, he takes this into question but now one letter disappears: war franz “irr?” The word Irr means ‘lost’ as well as ‘confused.’ In the final line of the poem, Bayer summarizes these two by combining two earlier introduced words: “wirr” “warr” - wirrwarr (confusion).

World War II left many writer and poets in Germany and Austria in a state of despair. How to go on? The Nazi’s had enforced a clear separation between art that in their eyes was deemed appropriate and art that was corrupting (‘degenerate art’). A lot of works were lost or were considered controversial after the war. Many intellectuals, therefore, sought inspiration from eighteenth-century iconic figures Goethe and Schiller.

Some sought to create something completely new and one of them was Konrad Bayer. Together with some like-minded people he formed the center point of Vienna’s culture scene in mid-1950, although Bayer stayed employed as a bank clerk throughout this period. Everything he and his kindred spirits created was experimental, among which this poem. It had a clear a clear purpose: to shock and awe. 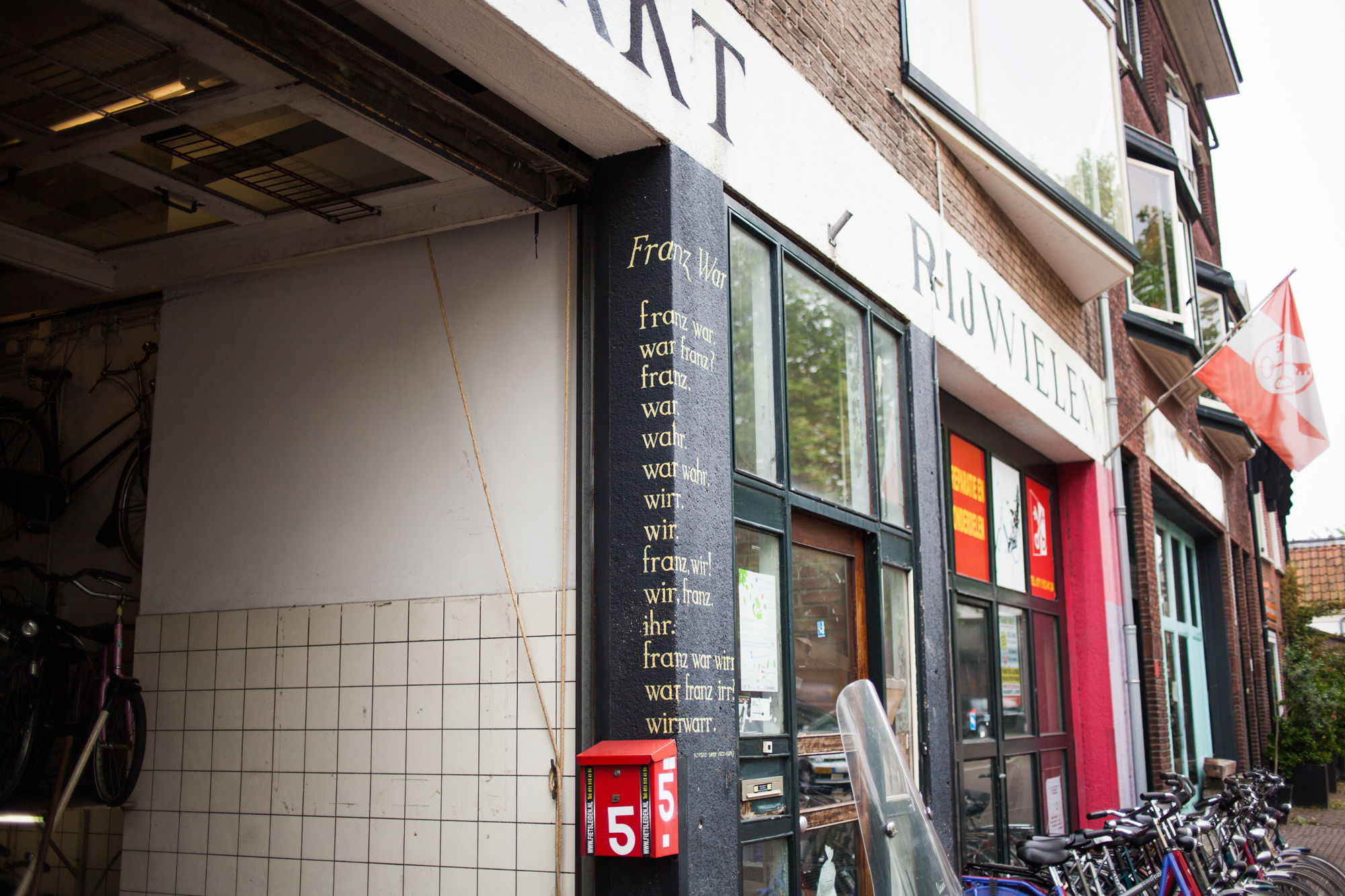 In 1994, this poem was painted onto a wall of the bike shop Bonaparte Rijwielen at the Kaasmarkt 4. The owner of this building desperately wanted a poem on his wall and contacted TEGEN-BEELD Foundation to discuss this further. The owner’s name was Frans and therefore he desired a French poem to be put on the wall, as ‘Frans’ is Dutch for French. Instead, he got this German poem about his namesake Franz. There was not much space to work with; this is probably the smallest wall poem of Leiden.

Konrad Bayer, like many other members of the Wiener Gruppe, was not understood by the general public or even thought of as an artist. However, these days he is considered an important writer in Austrian literature after 1945. Also, the public is still interested in his work.

Bayer was quite interested in assemblage, such as montage. One of his ideas was to make a film sequence about assemblage. There would be a montage of fragments from a technical book about the assembly of machinery, that the members of the Wiener Gruppe, dressed up as mechanics, in the assembly hall of a factory would read aloud. The project never took off.

This is something Austrian, but something that concerns us and is not just a game.

There is nothing communal, only language creates solidarity.

Street fable, a band from Leiden, has put this poem on music.

franz was
was franz?
franz.
was.
true.
was true.
confused.
we.
franz, we!
we, franz.
you.
franz was confused.
was franz confused?
jumbled.

This entry was written by Taalmuseum in collaboration with Chris Flinterman. The translation into English is by Natasja Oorthuis. The following publications were consulted: