Listen to this poem in Greek.
Voiced by: Irene Sluiter

What makes a woman an ideal candidate for marriage? Sappho believed she had the answer. You need to be culturally educated to be desirable, or for you to be remembered at all. This teaching is something that she passed onto her students with this poem, in which she also demonstrated her own level of knowledge.

Sappho lived around 600 BC on the Greece island of Lesbos, which is known for its flourishing literary scene. This was primarily a man’s world as were most public affairs in ancient Greece. For instance, women were seldom allowed outside without the company of a male relative, and it was uncommon for women to have a career. This was also true for Sappho, who came from a well-off family and was probably married and had a daughter.

Sappho is still a widely known poet, likely owing to her work as a tutor of young girls. This private tutoring was common and tutors were in fierce competition with one another. In her works, Sappho sometimes criticized her competitors and called their students stupid and uneducated. Sappho herself devoted a large amount of time to cultural upbringing, which involved the art of poetry. She presumably wrote about ten thousand lines in verse of which approximately six hundred fifty are still known today.

Anyone who wants to be remembered, must - according to the poem - pluck the 'roses of Pieria.' Piera is located at the foot of Mount Olympus, the highest mountain in Greece and the ‘house of the Gods’ in the words of the poet Homer (approx. 800 BC – approx. 750 BC). In Greek mythology, both Zeus and his daughters, the nine muses, could be found on Olympus. His daughters were the goddesses of song, comedy, dance, tragedy, historiography, flute-playing and other art forms. Many artists invoked them for inspiration.

In this poem, Sappho addresses someone who has not plucked the roses from the garden of these muses, or in other words, one who lacks a cultural education. She paints a gloomy picture of the future: No one will remember her, no one will desire her, and even in the underworld - 'the house of Hades' in the original Greek text - she will be invisible.

Might Sappho have been describing her own doom? She warns the lady in the poem that being forgotten after you die might be even worse than death itself.

Sappho helped young girls on the Greek island of Lesbos on their way to adulthood, and made sure they were ready for married life. According to the Greek philosopher Plutarch (approx. 46 - 120 AD), she addresses one of her students in this poem. The poem, which is also known as fragment 55, has clear educational purposes: anyone who wants to be remembered, needs to educate themselves. 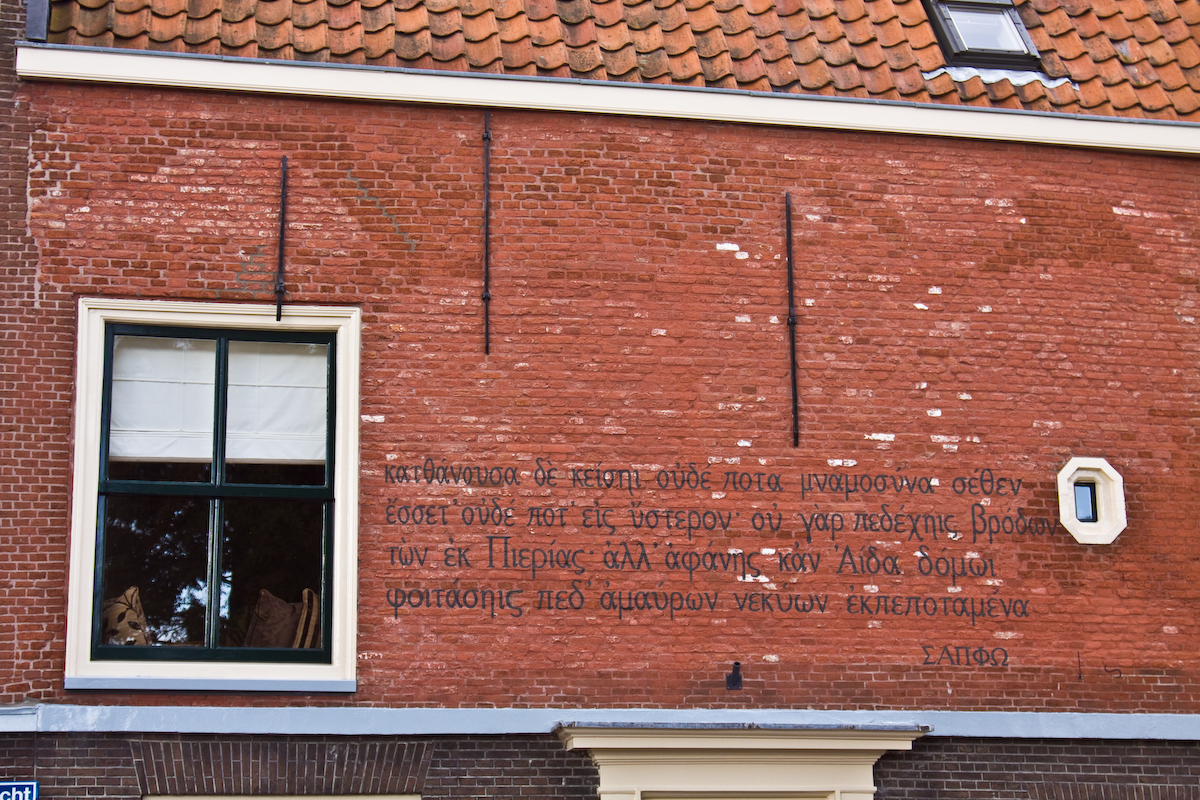 Since 1996, this poem can be found on the corner of Volmolengracht / Oude Singel. It has been selected by the Leidse Classicist and professor Chris Sicking (1933 - 2000) who taught Greek at Leiden University from 1964 till 1999. Not only did he select this poem, he is also responsible for the Dutch translation. Bottom right, next to the small spider painted by Jan Willem Bruins sits the signature of Sicking: a horizontal letter S.

Across from this location, at the other side of the canal, stood the medieval nunneries Saint Maria and Saint Catherine. It is entirely possible that women went there to escape their husbands. This was exactly the opposite of Sappho’s efforts; she taught women how to be desirable wives. After Leidens Ontzet (1574), when Leiden turned protestant, the city council demolished all nunneries.

Beauty and sexuality are two major themes in Sappho’s poetry which also describe her own feelings and experiences. This led to many philosophical debates about her sexuality and relationship between her and her proteges. It is not clear whether or not her poetry was intended as erotic or lesbian literature and if they indeed described the romances of Sappho and her intimate friends. Her poetry might also have been intended to educate future wives on their own body and sexuality. Nevertheless, it is interesting to note that the word ‘lesbian’ derives from the Greek Island of Lesbos, which is where Sappho lived.

For a long time, Sappho was one of few poets who gave a glimpse of the female perception, which is why many male authors based their female characters on her work.

She slowly came, I knew her by the sign; And fair she was, but far more strange than fair; I knew her by the roses in her hair; Pierian, and she saluted mine; Lifting her pale hand in that gesture high; The deathless use to those that cannot die.

Taken from the poem “A dream of Sappho” by Rose O’Neill, of which the first stanza contains a reference to this poem.

Some say there are nine muses
But they ought to think it through
For look, there is Sappho of Lesbos
She is the tenth.

You will die
and no one will remember you,
for you've had no share in the roses of Pieria,

but you will drift here and there, unseen,
in Hades' house, and flutter about
among the dark, not illustrious dead.

When Death shall close those Eyes

When Death shall close those Eyes, imperious Dame!
Silence shall seize on thy inglorious Name.
For thy unletter'd Hand ne'er pluck'd the Rose,
Which on Pieria's Realms unhonour'd you shall go,
And herd amongst th'ignobler Ghosts below.
Whilst I on Wings of Fame shall rise elate,
And snatch a bright Eternity from Fate.

This entry was written by Taalmuseum in collaboration with Geralde Langendijk. The translation into English is by Natasja Oorthuis. The following publications were consulted: