Is Afrikaans your native language and would you like to recite this poem? Please contact us at muurgedichten@taalmuseum.nl!

In the South-Africa of the 1960s, the country segregated by apartheid, a child is shot dead. Ingrid Jonker captures her feelings in a poem. Though initially controversial, the poem rises to national acclaim, especially with Nelson Mandela reading it at the first hearing of the democratically elected parliament in 1994. Die Kind is a charge against violence but also leaves hope for generations to come.

Ingrid Jonker was a free spirit. Friends described her as beautiful, smart, charming, and fierce. She passionately debated matters close to her heart. For the larger part of her life, Jonker lived with her daughter in an art colony in Bay Clifton, near Cape Town. The artists were all anti-apartheid, but at the same time they refrained from any strong political engagement.

Ingrid Jonker’s father left before she was born. As her mother was often ill, she was largely raised by her grandmother. They lived in Cape Town, and a lot of their time was spent on the beach. Ingrid wrote many short poems, which her grandmother sang to her. At the age of twelve, Jonkers lost both her mother and her grandmother in quick succession, and was then forced to live with her conservative father, whom she had never met before. Their bond remained a difficult one throughout her life.

In 1964, Jonker won the ABP prize. She used the prize money to travel through Europa. As her mental health deteriorated, she had herself admitted at a psychiatric facility in Paris. Upon her return to South-Africa, she was unable to recover, and took her own life by drowning herself in 1965.

“The child is not dead” is how the poem starts. The child is, however, at the police station at Philippi with a bullet through his brain, as Jonker tells us in the third stanza. And yet the child lives on, as a symbol of resistance and as a charge against violence and oppression. The same is true for the innocent children shot by the police in the other places she mentions.

Glimpse of the future

The child will pass judgement on previous generations; on protesting fathers and mothers, on soldiers and lawmakers, and on all those who contribute to an environment unsafe for the child to play in. It will transform into a giant, unaffected by borders and pass laws. The ending of the poem is therefore an optimistic one, an appeal, almost.

On 21 March 1960, South Africa saw large demonstrations against the pass laws. These laws were a fundamental aspect of apartheid, as these mandatory forms of identification were designed to keep people of color out of white areas. When the regulations were tightened up, non-white South Africans lost much of their freedom of movement, and protests arose.

In Sharpeville, a suburban district of Johannesburg, police opened fire on the protestors. Sixty-nine people were killed, among whom several children. In Nyanga, a township near Cape Town, a child of only one and a half years old was shot dead in his mother’s arms. Being the mother of a three year-old herself, Ingrid Jonker was shocked by the violence. She went down to the police station of Philippi to see the child’s body, and then wrote this poem.

Ella is happy. Her mother gave her a pretty yellow ball, when they went for groceries. Because the weather is so nice. The ball rolls off and bounces across the street. Ella runs after it. There are many cars. Luckily, they are parked. Ella throws the ball against the wall. Painted on the wall is Die Kind (the child), in Afrikaans. Two verses of a poem by Ingrid Jonker. Ingrid’s child is scared. Because mothers scream and fathers fight. Because her mother died and her father left her alone. Ella cannot read yet. She is just happy with her new ball. She throws it up at the sun and laughs. 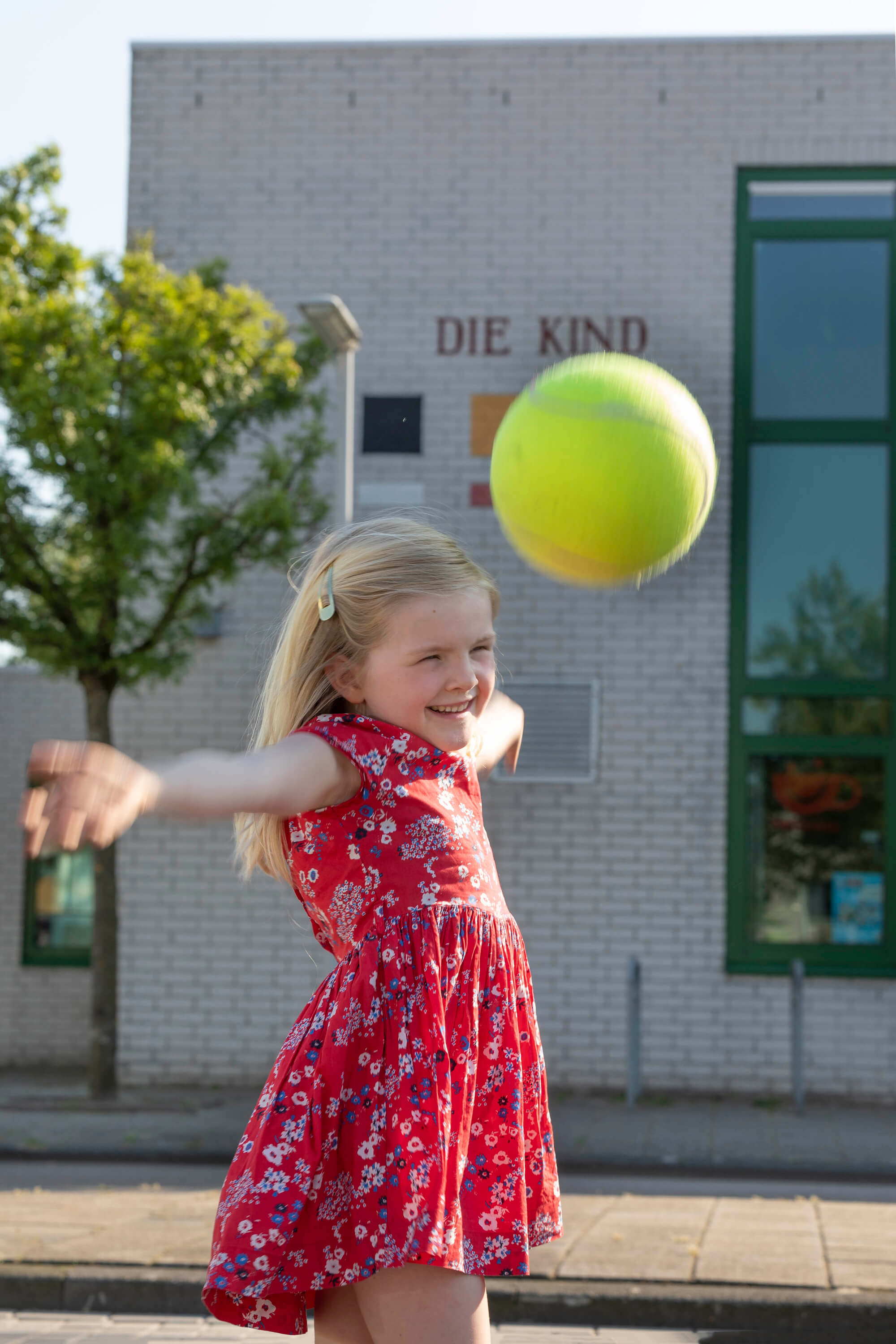 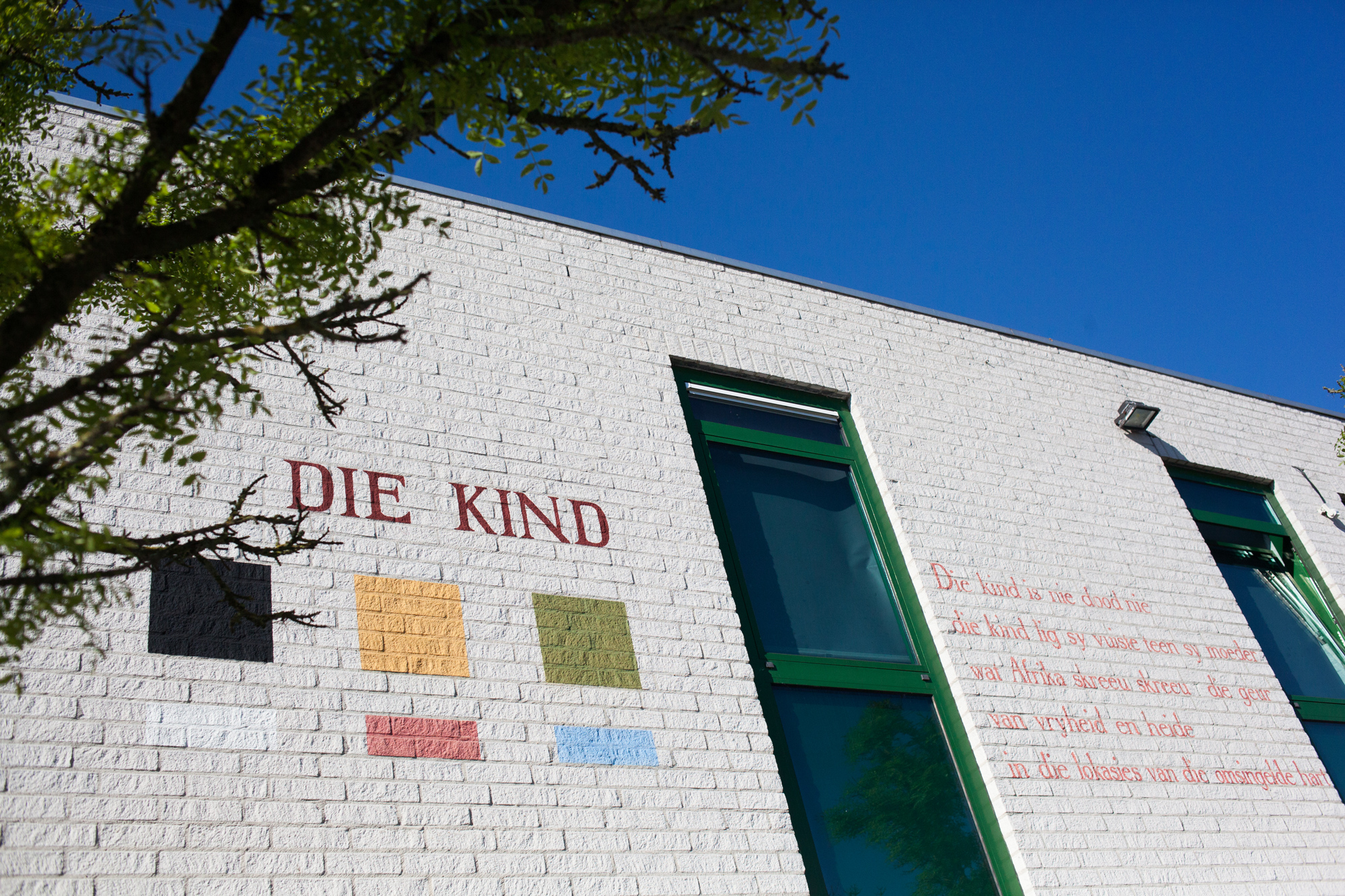 This poem was painted onto one of the library buildings of BplusC in 1998. 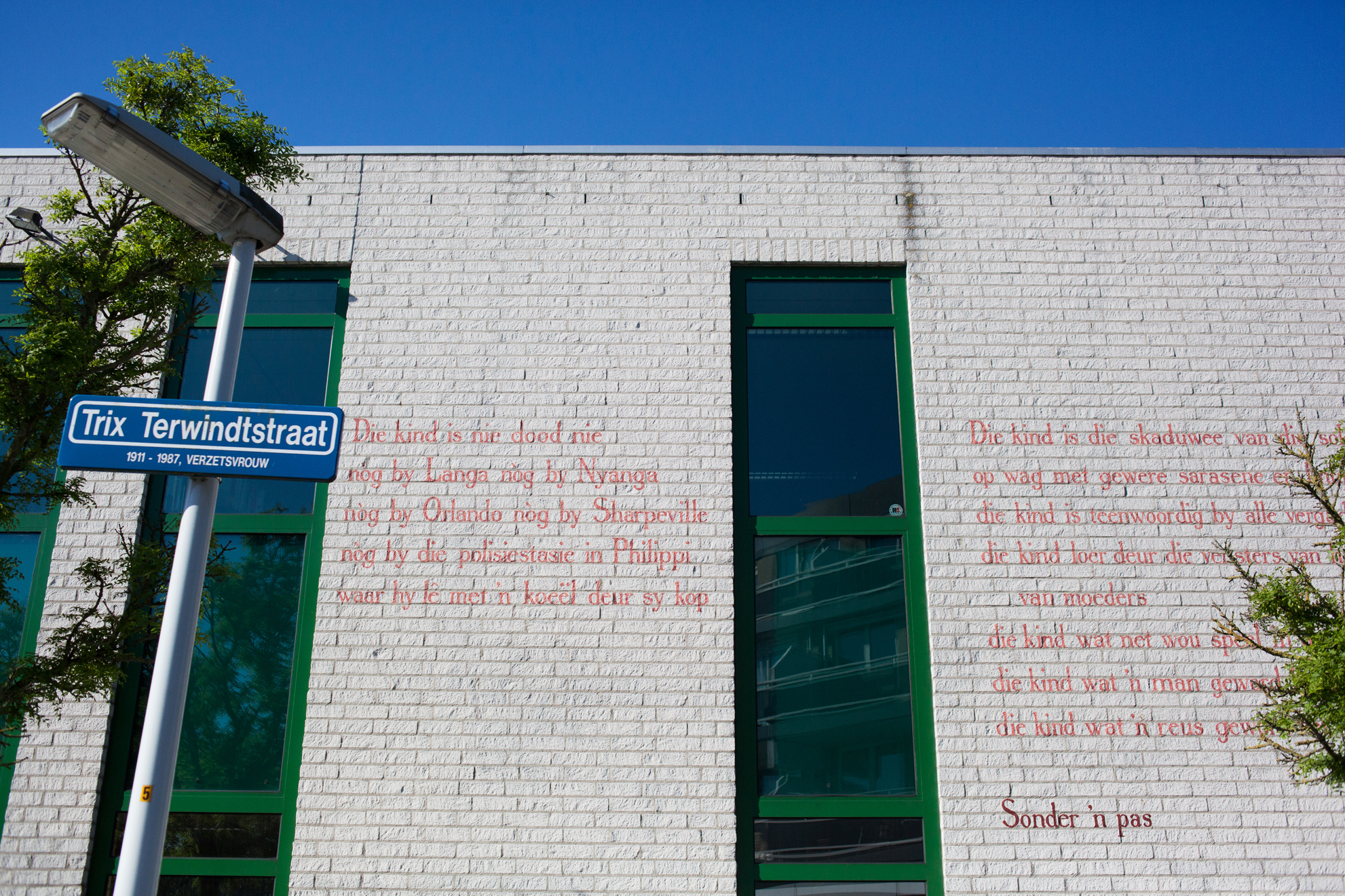 When Ingrid Jonker published this poem, it was immediately the subject of controversy in South Africa. The poem was rejected, even by adversaries of apartheid, due to its sharp tone and because it was deemed ‘unfinished.’ Jonker refused to alter it. General appreciation for the poem has increased considerably since then.

In 1994, president Nelson Mandela opened the first hearing of the first democratically elected parliament with the words: “In the dark days, when all seemed hopeless in our country, when many refused to hear her resonate voice, she took her own life. She was both an Afrikaner and an African. Her name is Ingrid Jonker. In the aftermath of the massacre of the anti-pass demonstration in Sharpeville, she wrote the poem Die Kind.” He proceeded by reading the poem aloud. Click here for the full speech.

She was beautiful. There was something about her that made you want to protect her, both against herself and others. She was unbelievably defenceless. She was stubborn. She had a young sort of Marilyn Monroe-type character. She was challenging, in her opinions and her actions.

One day, she said to me: “You know, you are the first colored person I’ve ever met, that I’ve been able to talk to.” Apart from that, I don’t know how she felt about other people, other people who were not white. She never even spoke about it. I think she was curious but of course many people didn’t have the opportunity to mix. There were problems at the time. The main problem was that of political madness.

Those who judge us should now be aware that poetry of this kind can also exist in the language of the so-called oppressor.

This oeuvre is devastating in its direct, emotional tone.

One cannot shed the thought that the overstated and often unwarranted praise for her poetry – even for weaker works – stems from the culture surrounding the person.

She was breathtakingly beautiful.

The child who was shot dead by soldiers at Nyanga

The child is not dead
The child lifts his fists against his mother
Who shouts Afrika ! shouts the breath
Of freedom and the veld
In the locations of the cordoned heart

The child lifts his fists against his father
in the march of the generations
who shouts Afrika ! shout the breath
of righteousness and blood
in the streets of his embattled pride

This entry was written by Eep Francken in collaboration with Taalmuseum. The translation into English is by Anne Oosthuizen. The following publications were consulted: