In 2000, poet and writer Gerrit Komrij received an honorary doctorate from Leiden University. Shortly after, he wrote De Schoolverlater (The Graduate) in which he shares his memories of his time at university. It is a romanticized notion: no academic obligations but complete freedom to go in search of knowledge yourself. That was what university meant to him and perhaps what it should mean to others as well.

Gerrit Komrij was a prominent writer, poet and critic. He grew up in Winterswijk and started writing poetry in high school. In the 1960’s he moved to Amsterdam to study Dutch. Afterwards, he worked as an interpreter and translator on Crete, became an editor at a publishing company for several years and published his own collection of poems in 1968.

In the 70s and 80s, Komrij became one of the best-known Dutch poets and writers because of his sharp pen. His savage reviews and essays were read by many and Komrij was feared and admired by his fellow artists. Besides reviews, he also wrote novels, translated plays and was known for his anthologies of Dutch poetry from the 17th century onward.

Komrij believed that writing poetry was all about freedom: he was unwilling to comply with rules, points of view or certain art movements. Therefore, his poems cannot be seen as a reflection of his feelings or reality, but stand on their own. Komrij kept on writing poetry until the day he died and published a total of fifteen poetry collections in his lifetime. From 2000 until 2005 he was named Dichter des Vaderlands, the Dutch equivalent of poet laureate.

The graduate in this poem has just finished high school. Komrij emphasizes the mandatory character of high school education: students are bound by compulsory education, until the age of 18 they need to prepare for their final exams and have to learn what is in the curriculum. He compares this set in stone-mentality to academic freedom. At university, he felt free to search for knowledge without being held back by rules and obligations.

Komrij himself started studying in the 60s. In this poem, he notes that university has become a lot stricter since then. The number of students has grown exponentially but the amount of time students are allowed to spend studying is limited (Komrij speaks of ‘speed demons’). Although every student is entitled to financial aid ever since 1986, the amount and duration have declined. Komrij points out that the value of knowledge cannot be measured by money alone.

On 8 February 2000, Gerrit Komrij received an honorary doctorate that was presented to him at the Pieterskerk in Leiden. He wrote this poem to commemorate the event and it was published in Leidraad, the alumni magazine of Leiden University in October 2000. 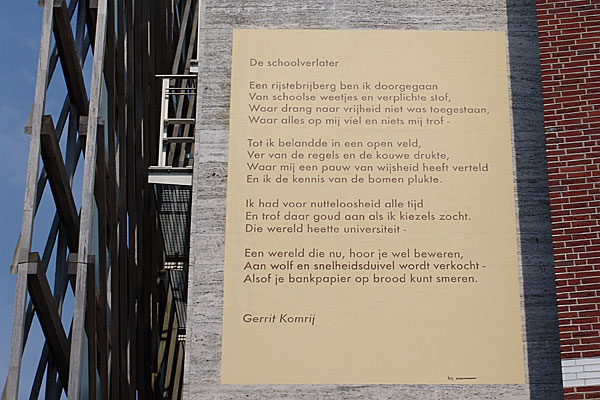 In 2007, Douwe Breimer resigned as Rector Magnificus (2001 - 2007) and president of the Executive Board (2005 - 2007) of Leiden University. At his farewell party, he was offered the choice of a wall poem by 23 Leiden student associations, the student body CASSA of the Leiden University Fund and several young alumni. Breimer chose the poem De schoolverlater (The Graduate). The wall poem was revealed on 5 September 2008.

This poem is not applied by TEGEN-BEELD Foundation but by Hendrik Ribot. He was also responsible for adorning other walls in Leiden with the poems Code d'Honneur by Ida Gerhardt and Aan u mijn groet, o Leidsch Studentencorps by Piet Paaltjens. Just like TEGEN-BEELD Foundation, Hendrik Ribot added his signature below the wall poem: his initials ‘H R’ and above this a knife containing the letter ‘F L O.’ The meaning of this is unknown.

What I like the most is that the students who visit the university's study market, on their way to the Kamerlingh Onnes building have to pass by this poem. I was promised that there would be a student there on that day to point out this poem to the soon-to-be graduate.

Former head of Leiden University Douwe Breimer made a joke at the reveal of this poem.

I crossed a sea of troubles
Of school facts and mandatory material,
Where the urge for freedom was not allowed,
Where everything fell on me and nothing stuck with me -

Until I ended up in an open field,
far from the rules and the hustle and bustle,
where I have been told by a peacock about wisdom
and I picked the knowledge from the trees.

I had plenty of time for futilities
and found gold where I was looking for pebbles.
That world was called university.

A world that now, it has been said,
is sold to wolves and speed demons -
As if bank notes can be spread on bread.

This entry was written by Het Taalmuseum. The translation into English is by Natasja Oorthuis. The following publications were consulted: