Listen to this poem in Frisian.
Voiced by: Douwe Breimer

For decades, Pieter Jelles Troelstra was one of the most well-known Dutch politicians. However, before he dedicated his life to social-democracy, he was captivated by the Frisian language. In his early twenties, he published a collection of beautiful pieces of Frisian writing and could not resist making a contribution himself. What could be more suitable than this poem, in which he describes what ice-skating means to the Frisians?

The sword of poetry

His biographer Piet Hagen writes, “Pieter Jelles doesn’t want to make ‘art for art’s sake’, but wants to put his poetry in service of a better world.” His poetry makes a contribution to the world, his poetry is the poetry of the people. The poet, according to Troelstra’s poem De sjonger en de wrâld (The poet and the world) has to be in service of “the large questions”; to encourage goodness in man and create an earthly paradise for everyone:

Enter the world! Fight with the sword of poetry;
The voice of truth will rise from your heart,
You will show the lost the path to Good
And establish the realm of Love and Harmony!

Pieter Jelles Troelstra did not only enter the history books as a poet, but also as a politician. As an attorney, he was confronted with injustice and exploitation in the Frisian countryside, and was captivated by socialism. For decades, he was the party leader of the Sociaal-Democratische Arbeiderspartij (SDAP; Social-Democratic Labour Party) and an eminent member of the Dutch House of Representatives.

Troelstra was a passionate politician and advocate of the Frisian people, which he remained until his death. His political career, however, ended late November 1918. Back then, he propagated the liberation of the working class. This was an extreme position to take, especially as violent revolutions were happening in Germany and Imperial Russia. Although his political role was over, he remained an icon for the social-democrats and the Frisian movement.

In the poem, Troelstra captures the Frisian spirit. When the temperature drops below freezing point, the Frisians start to feel butterflies. Not because of love, but because of the ice-skating fever. When the waters have frozen over, people are finally able to skate outside, which is just as thrilling as the arrival of Spring.

The Frisian poem has an ambiguous title, which proves to be difficult to translate. Mainly, “maaie” is the Frisian word for the month May, but in a broader sense, it could also mean Spring. However, it is also commonly used in the context of ice-skating: which resembles, according to some, the maaien (swinging) of the arms and legs.

In the first and the final line of the poem, the word maitiid is used; which translates as Springtime or simply Spring. It thus is time to mow (maaien) the grass. Again, there are multiple interpretations: it is time to swing (maaien) the arms and legs! And if there is also a nice girl to maaie (ice-skate) with, as if it is maaie (Spring)... Ice-skating fever and butterflies. The poem plays around with the ambiguous meaning of the Frisian word maaie.

Pieter Jelles Troelstra presumably wrote this poem in 1881, when he was twenty-one years old and was still enjoying a classical education. During this period, he was captivated by the Frisian language. Although his family was well-off and therefore spoke Dutch at home, young Troelstra searched for Frisian-speaking contemporaries, who encouraged and distributed their language and culture as well. In 1881, together with a like-minded peer, he compiled the collection It jonge Fryslân (Young Friesland) in which the works of a large number of young Frisian poets and writers were collected. Maaie op het iis (May on ice) is also included.

From the Rembrandtbrug, Max Dohle pensively looks out over the Galgewater. Behind him is the reconstructed lever-barrier booth, once the port warden’s residence. In 2004, Max took the initiative to realize a wall poem about ice skating. It is the only Leiden wall poem in Frisian. Max writes about sports history, particularly about ice-skating. The Galgewater is Leiden’s best skating spot. Almost as beautiful as the Frisian lakes, thinks Max. Troelstra wrote Maaie op it iis (on the ice in May) at the end of the nineteenth century. Max dreams of severe winters. He has never been able to skate the Galgewater in May. A century ago, it was around 8°C on average in spring. Now it’s 10. But those are the temperatures of Holland. In Friesland, it’s always colder in winter. And Frisians are no Leideners. Frisians keep going, even on thin ice. And in their flag, the red lily leaves (pompeblêden) and sloping lines are positioned differently: like hearts on an ice-skating rink. 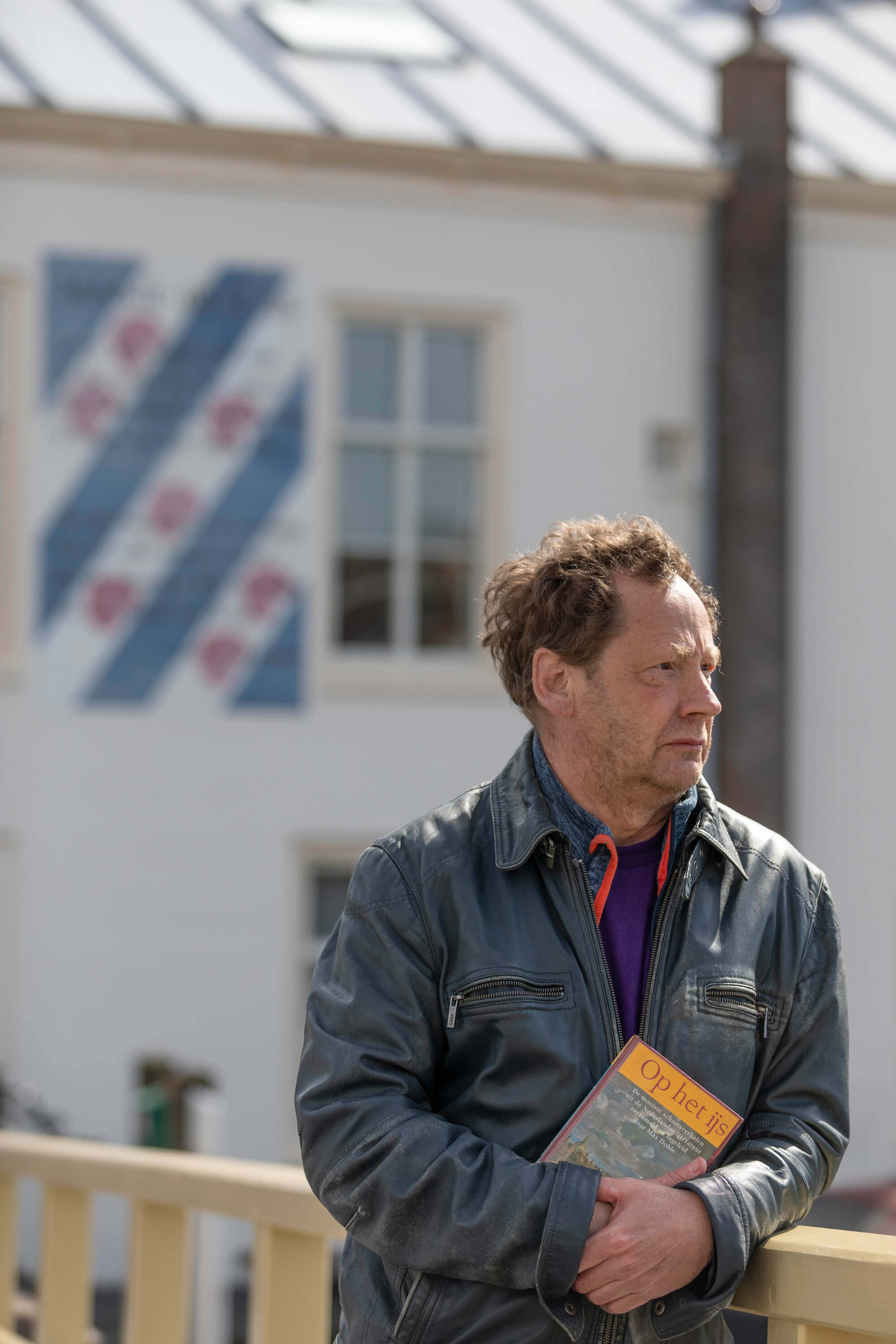 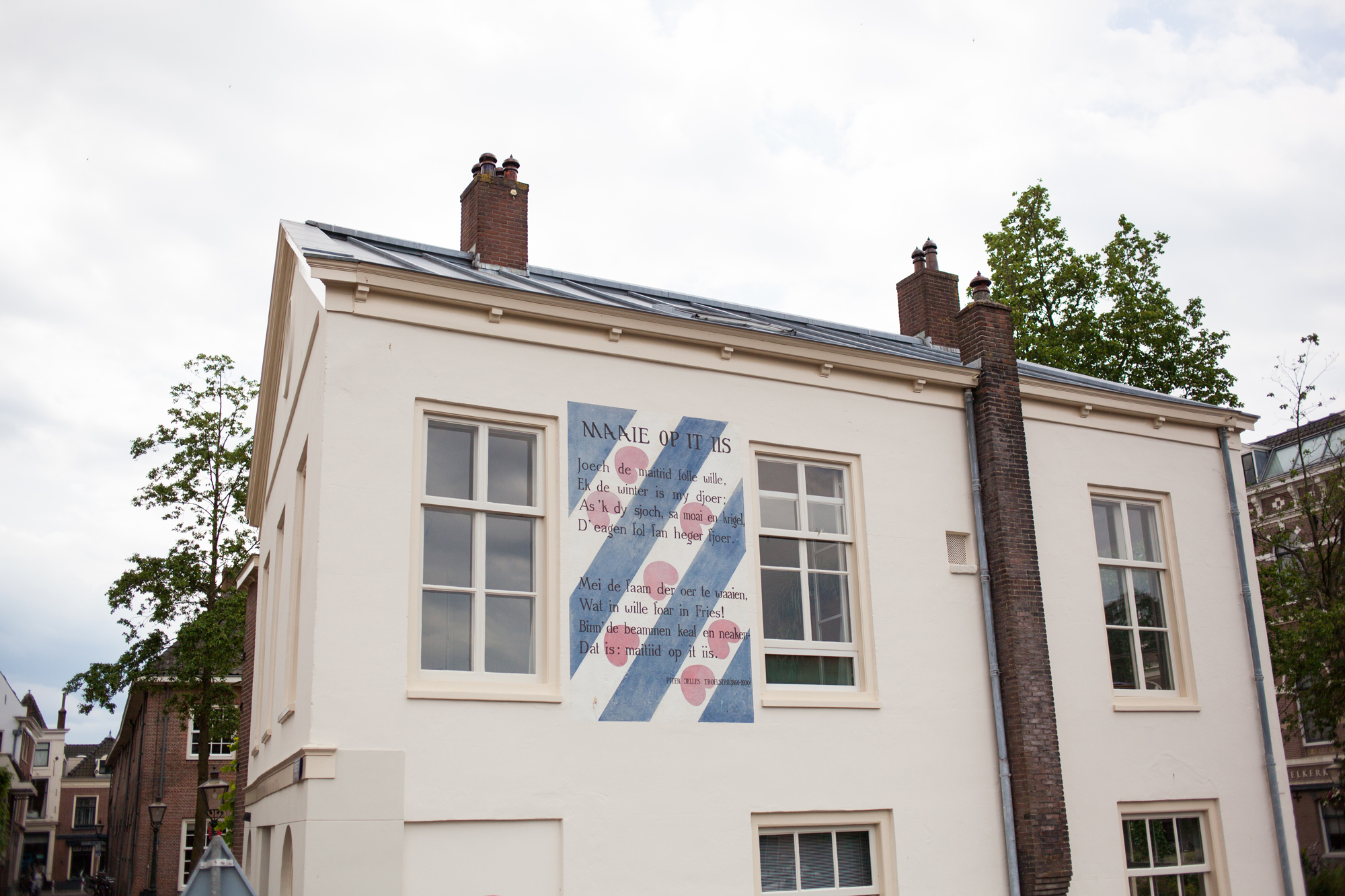 This poem was painted on the wall in 1999 when a Frisian family lived in the house. The house used to belong to the director of the former Maritime Academy, which was located close-by in Rembrandtpark. Below the poem, there is a signature of a little jackdaw. Leiden-born Max Dohle, an ice-skating and poetry enthusiast was allowed to choose the poem. Dohle is German for jackdaw.

The wall poem overlooks the Galgewater, where the Oude Rijn and the Nieuwe Rijn converge and the Rhine will run towards Katwijk, where the river discharges into the sea. Here, in past cold winters, people were able to skate in and out of the city. The Galgewater has been a popular ice-skating spot throughout the ages. A painting of Jabes Heenck, named IJsvermaak op het Galgewater (Ice-fun on the Galgewater) can be found in museum De Lakenhal, which is located nearby. It is likely that the young Rembrandt skated on the Galgewater. The house in which he was born was located here in the Weddesteeg.

Troelstra and the Frisian character

Frisian blood, come on! / It wants to bubble and boil!
And roam through our veins!

These are the opening lines of the Frisian anthem. Frisian blood flows more strongly through the veins when the ditches and ponds have frozen over. And when there is ice in Friesland, all the Dutch people start to suffer from the ice-skating fever and begin to hope for the Elfstedentocht; an ice-skating marathon in Friesland, where participants skate past eleven cities and over nearly 200 kilometers. The poem does not just describe a winter’s day, but also the joyous expression of Frisian character. Troelstra’s contributions to Frisian literature indicate his close connection to the Frisian language and culture.

May on the ice

Should spring bring joy,
Also winter I admire
As I see you, fair and spirited,
Eyes filled with higher fire.

With his girl gliding across
For a Frisian, this is paradise!
As the trees are bare and exposed,
This is: springtime on the ice.

This entry was written by Het Taalmuseum in collaboration with Joris D. Raven. The translation into English is by Demi van de Wetering. The following publications were consulted: