Listen to this poem in Spanish.
Voice: Elisabet García Glez

Federico García Lorca is one of Spain most famous poets and his work has trascended above and beyond Spanish and Spanish-American literature. He was one of the most well-known representatives of the Generation of the ’27, a group of artists that shaped Spanish arts, music and literature between 1923 and 1927. Although some had argued that Lorca was not “an A student” during his adolescence, he dove and lived for books his entire life. He studied law, literature and composition at the University of Granada, but had a strong affinity for the arts from early on. His early successes in poetry lead him to move to Madrid, where he attended university and lived in the Residencia de Estudiantes “Students Residence”, where became close friends with other contemporary artists such as the surrealist painter Salvador Dalí and filmmaker Luis Buñuel.

Besides his poetry, he stood out as a play writer. His works represent a stellar transition from tradition to avant-garde. While some of his earlier work highlights the importance of continuing the flamenco traditions of his town, Granada, his time in Madrid and later in New York and Cuba sharped his later pieces with a sentiment of modernity and urbanism. Lorca’s return to Spain coincided with the fall of the dictatorship of Primo de Rivera and the establishment of the Second Republic in Spain (1931-1936), a period of true advancement for the country both culturally and politically.

Lorca was, and still is, a staple of Spanish literary tradition. Yet, he has also become a crucial symbol of the repression towards homosexuals that Europe experienced at the time. Much of his poetry precisely portrays this struggle of personal identity and fear for his own life. It was in fact his sexual orientation, the modern tone of his work, and his political social views what put him under the scope of the press and made him a target for the conservatives. This constant fear is also reflected in his final pieces, a fear that became reality the 18th of August of 1936, soon after the braking out of the Spanish civil war (1936-1939). His assassination is certainly remembered with great grief, sadness and respect for one of the pillars of Spanish modern poetry.

De Profundis belongs to a collection of poems “Poema dell cante jondo” where Lorca explores the topic jondo genre, typical of flamenco gipsy culture he was surrounded by while growing up in Granada. The title of the poem replicates that of Oscar Wilde’s epistle while he was incarcerated for being homosexual. De profundis, which translates from Latin “from the depths” had a great impact on Lorca. Europe, and Spain specifically experienced great hatred for homosexuals, and Lorca became a victim of such a stigma.

In the poem, “the hundred lovers who are forever asleep” could be representation of those who suffered and were even killed exclusively because of their sexual orientation. Those who lay under “the dry earth” remind us that this hate towards homosexuality that Lorca himself was experiencing, was nothing more than the infinite number of so many others that preceded him, who died for the simple fact of whom the loved. Ian Gibson, who has researched Lorca’s live and work, mentions the poets fascination for Wilde’s De profundis. Gibson remarks Lorca’s own annotations in the following paragraph of Wilde’s text for his inspiration:

Now it seems to me that love of some kind is the only possible explanation of the extraordinary amount of suffering that there is in the world. I cannot conceive of any other explanation. I am convinced that there is no other, and that if the world has indeed, as I have said, been built of sorrow, it has been built by the hands of love, because in no other way could the soul of man, for whom the world was made, reach the full stature of its perfection. Pleasure for the beautiful body, but pain for the beautiful soul.

Andalucía, the region where the poet was born, “has long red paths”, which could fairly well be signs of suffering and death. “Córdoba, olive trees” do not only take us closer to a clear symbol of the south of Spain, but it also reminds us of the the green color, which is so often a representation of the coming death in Lorca’s poems.

There is, of course, room for all kinds of interpretations, regardless of which, this poem brings us closer to Lorca’s identity and artistic persona.

This beautiful poem origins at the core of Lorca’s admiration for the Irish poet Oscar Wilde. Wilde, who was sentenced and incarcerated for sodomy, wrote during his time in prison at Reading De Profundis, an epistle to his friend and lover Lord Alfred Douglas. During a time in Europe where homosexuality was condemned and persecuted, Spain was no exception. Lorca struggled his entire life with his wish to embrace his identity and his fear to protect his own life. Much of Lorca’s work reflects in fact this inner battle. The poem belongs to his work El poema del cante jondo, one of Lorca’s most popular books. He composed it in Granada, his natal town. His purpose was to reclaim the tradition of flamenco culture, such an essential flavor of the city.

Ben Walenkamp talks about this and other poems in Leiden: 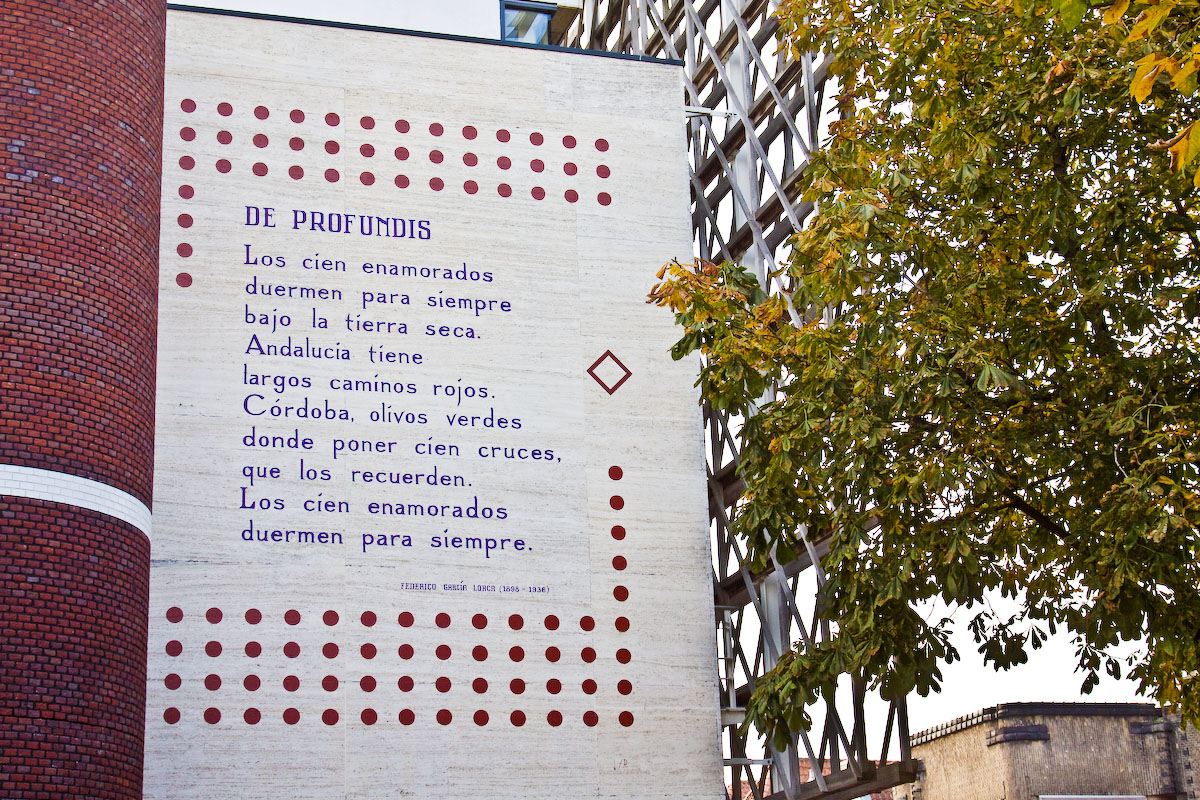 Federico García Lorca, and much of his poetry has had a major impact for the homosexual community of his and our time. This poem in particular reflects “the hundred lovers who sleep forever” as the many men and women who suffered from social isolation and stigma to incarceration and even death due their sexual orientation. While Lorca’s work has been admired for his its creativity and beauty, his life and experience has been celebrated as a symbol of resistance in the homosexual community. Many scholars have explored his friendships with Manuel de Falla, and specially, with Salvador Dalí as crucial romantic relationships of the poet.

Last bat not least, Federico García Lorca’s premature death portrays a heartbreaking symbol of the fall of Spain’s progressive perspectives during the Second Republic, which lead to one of the darkest and deathliest times of the country during its civil war.

Now it seems to me that love of some kind is the only possible explanation of the extraordinary amount of suffering that there is in the world. I cannot conceive of any other explanation. I am convinced that there is no other, and that if the world has indeed, as I have said, been built of sorrow, it has been built by the hands of love, because in no other way could the soul of man, for whom the world was made, reach the full stature of its perfection. Pleasure for the beautiful body, but pain for the beautiful soul.

Oscar Wilde, De Profundis, text on which this poem is based.

To burn with desire and keep quiet about it is the greatest punishment we can bring on ourselves.

At the heart of all great art is an essential melancholy.

In Spain, the dead are more alive than the dead of any other country in the world.

As I have not worried to be born, I do not worry to die.

This entry was written by Elisabet García González. The following publications were consulted: