Jan Hanlo started writing poetry during World War II. After the war, he wished to create a collection of his works, but publisher was hard to find. The collection only appeared after he made a name for himself with several experimental poems, including De mus. In order to write this poem, nature-loving Hanlo placed himself in the role of the eponymous bird. The poem not only makes you laugh but also stimulates the imagination; we might never know what and why the sparrow is singing, but we sure can think about it.

Want to know more? On this website you can listen to the poem, discover its origins and its author and find out what poem means to the people of Leiden.

“I was laying in bed with the flu when I thought: let me try to write a poem. Everybody writes poems. Moreover, I was in love. Back then I wrote Zo meen ik dat ook jij bent and that is when it all started, in 1943. Every one or two months something was put on paper.” When Jan Hanlo started writing poetry, he was already in his thirties. In the end, he wrote about a hundred poems.

Jan Hanlo was born in the Dutch East Indies. That same year, his parents separated. Hanlo spent his youth in Deurne and obtained his secondary school degree in Heerlen. He started studying psychology which he never finished. After the World War II, he taught English in Amsterdam and tried to establish himself as a poet. Jan Hanlo always remained an outsider because of his background, his life and because he used many different styles and never became part of a specific group or movement. In the late 1950s, he moved to Valkenburg (Limburg) to take care of his mother. Until his death in 1969, he pursued his passions: poetry, nature and motorsport from his one-room home.

Jan Hanlo did not have a simple life. He struggled with pedophilic impulses and because of a psychosis was temporarily admitted to a mental institution, where he was presumably castrated. His biographer Hans Renders diagnosed him with ‘Peter Pan Syndrome’; at heart he wanted to remain a child and interact with other children. In 1969, Hanlo brought a twelve-year old boy from Morocco to live with him in Valkenburg. Soon after, the child was deported from the Netherlands. A few weeks later, Hanlo died in a motorcycle accident at the age of 57.

The sparrow starts his song with two “tjielps” (chirp), after which a short pause and three more “tjielps” follow. The second line reverses the sequence; first thrice “tjielp”, and after a short pause, two more “tjielps” follow. The sparrow starts out somewhat tentatively, after which it falls silent. Then, the sparrow gains some confidence: six times “tjielp” follow, no pause. Tired and probably bored by of the lack of response, three “tjielps” follow, a blank line which almost seems to be a sigh, and one last ‘“tjielp”. Has the sparrow figured out that chirping is senseless, since it only has one sound at its disposal: tjielp? Or does the sparrow continue to sing unfailingly, because that’s just what sparrows do?

The “etc.” at the end leaves room for different interpretations. The poem could be the endless song of a sparrow that keeps chirping. Perhaps “etc.” allows one to finish the poem by oneself and cast it into a more traditional form of poetry, like a sonnet. Or, “etc.” allows one to express the inexpressible. Or ...

For that matter, a sparrow is more likely to tjilp rather than to tjielp - according to the Dutch Dictionary Van Dale. According to some people, this difference in interpretation means that Hanlo, who wrote multiple poems about birds, wanted to illustrate that the human imitation of nature is always flawed. In this manner, De mus (The Sparrow) might be about the ideas we have about the sparrow in the poem rather than the actual bird itself. What the sparrow truly sings we may never know.

In 1946, shortly after World War II, one of Hanlo’s poems was published in a literary magazine for the first time. In the years that followed, several leading journals published his works. However, not a single publisher believed a living could be made from a poetry collection, as his poems were too diverse. In addition, the fact that he was not part of any group or movement did not help as well.

In order to change this, Hanlo approached several young poets from Amsterdam who made a case for experimental poetry. Although Jan Hanlo never became part of de Vijftigers, the name under which this group was known, he did write several experimental poems in this period including De mus (The Sparrow). De mus was part of his coveted first poetry collection, which was published in 1951. 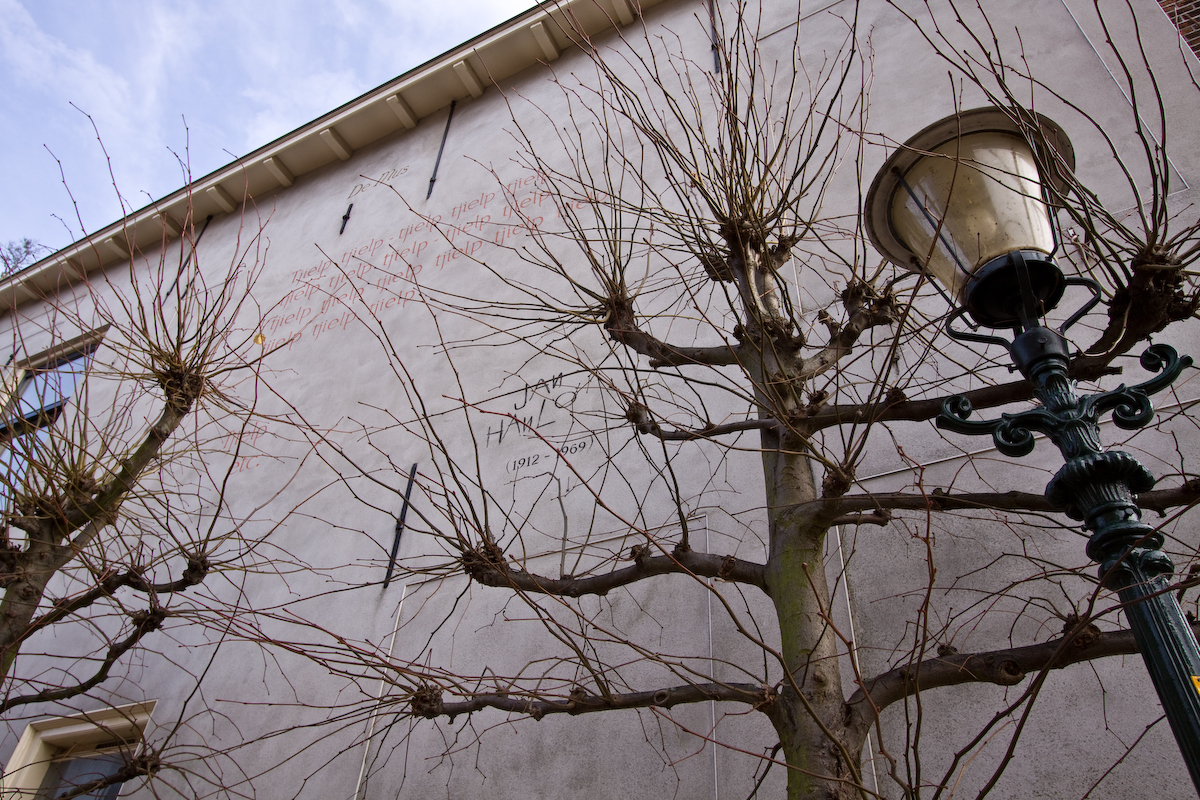 Poetry of Hanlo can be found outside the Netherlands as well. The English translation of De mus - The Sparrow - made by James Brockway, can be found on a facade of a family farm in Dublin, Ireland. The poem consists of twenty times ‘chirp’, closed off by ‘etc.’.

In 1952, Jan Hanlo became known nationwide because of his sound poem Oote, which starts as follows: Oote oote oote / Boe / Oote oote / Oote oote oote boe / Oe oe. Elsevier magazine allowed eight recognized poets to explain whether this could be considered poetry or not. Dutch politician W.C Wendelaar recited the poem to the Dutch Senate and then asked them to terminate the subsidy for the magazine which published the said poem. For this reason, Oote was regarded as the example of Dutch experimental art for a long time.

De mus (The Sparrow) continues to be discovered by new generations and continues to appeal to the imagination. In 1996, the poem was put to music by musician and componist Tom America. Componist Henny Vrienten introduced the song to cabaret artist Wim de Bie who decided to use it in the comedy television program Van Kooten en De Bie. The song was supposed to be the intro of the television program. However, an ‘assault’ had been committed: the videotape was destroyed. The reason was because sparrows tjilp, not tjielp.

Listen to the song by Tom America:

Jan Hanlo is an author who is continuously rediscovered. And this is a compliment which cannot be given to many Dutch writers or poets.

Jan Hanlo is actually the ideal poet. You can start reading as is, and it always hits the spot. And it is suitable for all ages.

Jan Hanlo is one of the most peculiar individuals in Dutch Literature. He is an outsider in nearly every way, a lone wolf, with a mind that in a completely original manner, apart from each movement and school, expresses his thoughts and feelings - like there was never any literary tradition at all.

No severnes nor sorrow in art - the enjoyable art thus - is entirely without humor.

This entry was written by Het Taalmuseum and in collaboration with Chris Flinterman. The translation into English is by Demi van de Wetering. The following publications were consulted: