The foundation of all Jan Wolkers’s poems are memories. In the poem De herinnering (The memory) he describes their effect. Even if the memories seem to have faded, they are suddenly revived and fresh in one’s memory like never before. This was especially true for the memories which prompted him to write this poem, the ones of death.

As a child, Wolkers’s favorite activities were drawing, painting and clay modeling. During his adolescence, he lived in Leiden where he took painting lessons, after which he followed an art course in The Hague. After this course, he further developed his skill as a sculptor in Amsterdam and Paris. He also started writing in 1957. Even though Wolkers was widely known as a writer, poet and painter, he considered himself a sculptor in the first place.

Wolkers himself said: “No one has stayed closer to the truth than I have. My life and work are one and the same.” The line between his life and his work was paper-thin and he often wrote about sex and death unambiguously and without regard for taboos. Partly due to this, his books often made a big impression when they were published. They were maligned, applauded, filmed and awarded. Especially Turks Fruit (Turkish Delight, 1969) and Terug naar Oegstgeest (back to Oegstgeest, 1965) became Dutch classics.

Jan Wolkers grew up in Oegstgeest, settled in Amsterdam as an artist, and found his ‘home’ on the Dutch island of Texel in 1980. He lived there until his death in 2007. Wolkers’s legacy consists of several novels, poems, collections of stories and essays, sculptures and paintings. In 2017, the biography of Wolkers was published, written by the Leiden-native Onno Blom.

This poem describes a memory from the past being revived. It seemed to have faded, as we read in the last line: “A thought that no longer was.” But now the memory feels alive and ‘fresh.’ How is this possible? Wolkers gives a hint with the line ‘through earth and dust’ which conjures up images of a funeral. When he lost several friends and relatives in a short period of time, it recalled the memory of earlier loss. It immediately felt as fresh as ever before.

Wolkers’s greatest source of inspiration was his own memory. Few writers left as many diaries behind as he did. Wolkers incorporated his memories in his books, poems, sculptures and paintings. Sometimes these memories covered his childhood in Oegstgeest, and death often played a role. The death of his favorite brother Gerrit, his father, his mother, and his daughter Eve remained ‘fresh’ memories his entire life. In Wolkers’s biography, Onno Blom proposes to regard his oeuvre as a form of grieving.

The poem De herinnering (the memory) is one of three poems from a triptych that Jan Wolkers wrote in early 2001. He was inspired to write the triptych after two good friends and a relative had died in a short period of time. According to Onno Blom, his biographer, De herinnering is the most universal poem of the triptych. In this poem, Wolkers focuses - as in many of his works - on the memory and contemplates the value of the memory, the (im)possibility to present your past in a pure way.

Jetteke Bolten, who played an important role in the realization of this wall poem, shares her story.

Jan Wolkers in Leiden and Oegstgeest 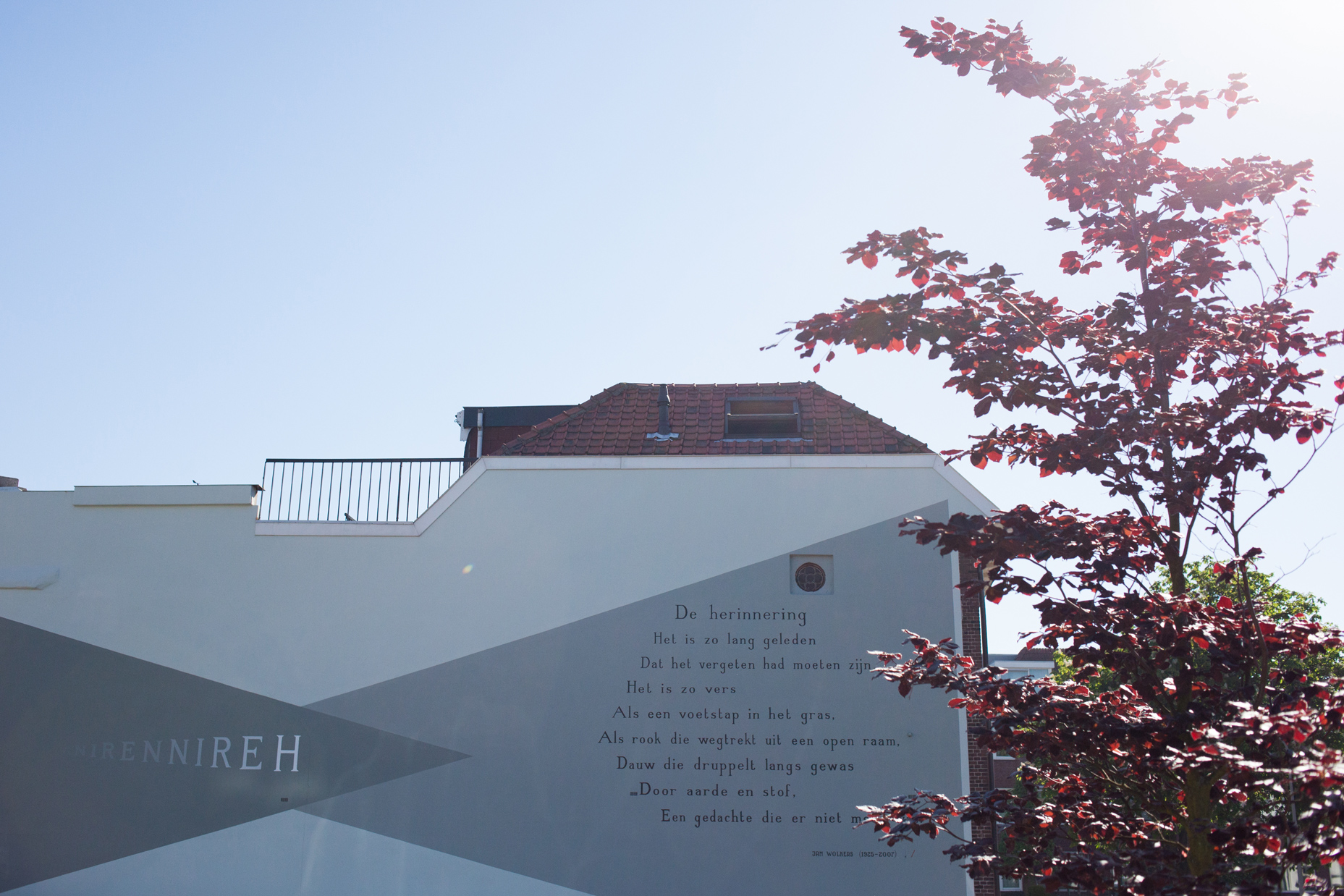 Jan Wolkers was born on 26 October 1925 at Deutzstraat 7 in Oegstgeest, above the grocery store of his Protestant parents. The successful novel Terug naar Oegstgeest (back to Oegstgeest, 1965) covers the writer’s childhood. The neighboring city of Leiden has also played an important role in Wolkers’s younger years. He took painting lessons there, worked in the laboratory of Leiden University and lived in the city. The artistic legacy of Jan Wolkers will be housed in the Leiden University Library and Museum De Lakenhal.

On 26 October 2017, what would have been the 92nd birthday of the writer, ten years after his death, the wall poem De herinnering was unveiled on Deutzstraat in Oegstgeest by his wife Karina Wolkers and his biographer Onno Blom. The poem is painted on the wall opposite his birthplace. It is the first wall poem in Oegstgeest, and honors its most famous resident.

The design of the wall poem is created by Ben Walenkamp in collaboration with the initiators from Oegstgeest.

Dying is the climax of life.

Look, death is very important in my work, but no one’s ever nagging about it. It’s the nature of things that everything disappears, that we dissolve into mist.

Atypical of this poem by Wolkers is the lack of sex and eroticism.

It was so long ago
that it should have been forgotten,
It is so fresh
Like a footstep in the grass,
Like smoke lifted through an open window,
Dew dripping along crop,
Through earth and dust,
A thought that no longer was.

This entry is written by Nikki Spoelstra in collaboration with het Taalmuseum. The translation into English is by Rianne Koene. The following publications were consulted: