A fish moving in a painting: it is possible with surrealist poet Chris van Geel. But what exactly moved him to write this poem? Did he see a fish swim back and forth and was his heart moved by that? Or did he fantasize about movement on the canvas, possibly while he was painting himself? In any case, Bewogen (Moved) moves the mind and asks the question where boundaries lie.

Chr.J. van Geel was born into an artistic family. His father, also named Chris, designed bindings of books, leaded glass, decorative art and letters. It did not bring in much and in the 1930s, the family was even on welfare for a while. ‘If you become an artist as well, I will break both your legs’, Chris’s mother would have cried out in that time. It had no effect: he attended the School of Applied Arts and proceeded to live a life of no compromise, often in grinding poverty.

As a visual artist Van Geel was initially supported by his grandfather, with whom he lived for a long time. Artists E. du Perron (1899 - 1940) and Emiel van Moerkerken (1916 - 1995) were regular visitors there and they introduced Van Geel to surrealism. He produced a great number of drawings and illustrations, which were exhibited in the Amsterdam Stedelijk Museum, among other places.

After his grandfather’s death, Van Geel left Amsterdam in 1946 and moved to the small town of Groet in North Holland. Dune sand, birds, animals and twigs now rose to an important role in his work. He also wrote his first poems around this time. Van Geel thought that a poem was never finished and endlessly kept rewriting and polishing it. He usually kept all versions, as if they were separate poems. His work was published in literary magazines such as Tirade, Barbarber and Hollands Maandblad.

In 1972, a large part of Van Geel’s work was tragically lost when his house in Groet burned down almost entirely. He passed away two years later, when he was 56 years old. His partner, Elly de Waard, has taken care of his legacy. Although a lot had been lost, she also found much unpublished work, a part of which has been collected and published posthumously.

Chris van Geel is considered a surrealist, someone who turns reality around, blows it up and approaches it differently. A remarkable aspect of his poetry is that he plays with language. By placing a word in a sentence just a little differently, for example, its meaning changes. He also likes playing with multiple meanings. Bewogen (Moved) is a nice example of the ambiguity of language and the paradox that it can present.

A photographer can capture movement in a blurry photo, but this does not hold true for a painting. The only possible movement is with the spectator: he can be moved emotionally by what he sees, he can be touched by it. Is Van Geel describing such an experience? Are we even sure that he was actually viewing a painting, or was it simply so picturesque that it looked like one? There is only one thing we can be sure of: there is a fish, swimming back and forth.

The fish could have swum towards a goal, but it doesn’t: it swims back and forth. It makes the reader think of a fish bowl or aquarium, containing fish that aimlessly swim in the same, never-ending circles. They have no choice, of course, because the space is limited - just like in a painting, which is usually framed. Frameworks like that often determine how you move and what you see. In only a few words, Van Geel playfully illustrates the power of frameworks.

Chris van Geel has written a great number of poems that consist of only a few lines. Unfortunately, there are no details known about this particular poem. It was first published in the Hollands Maandblad issue of June/July 1968, in a series of 30 poems. 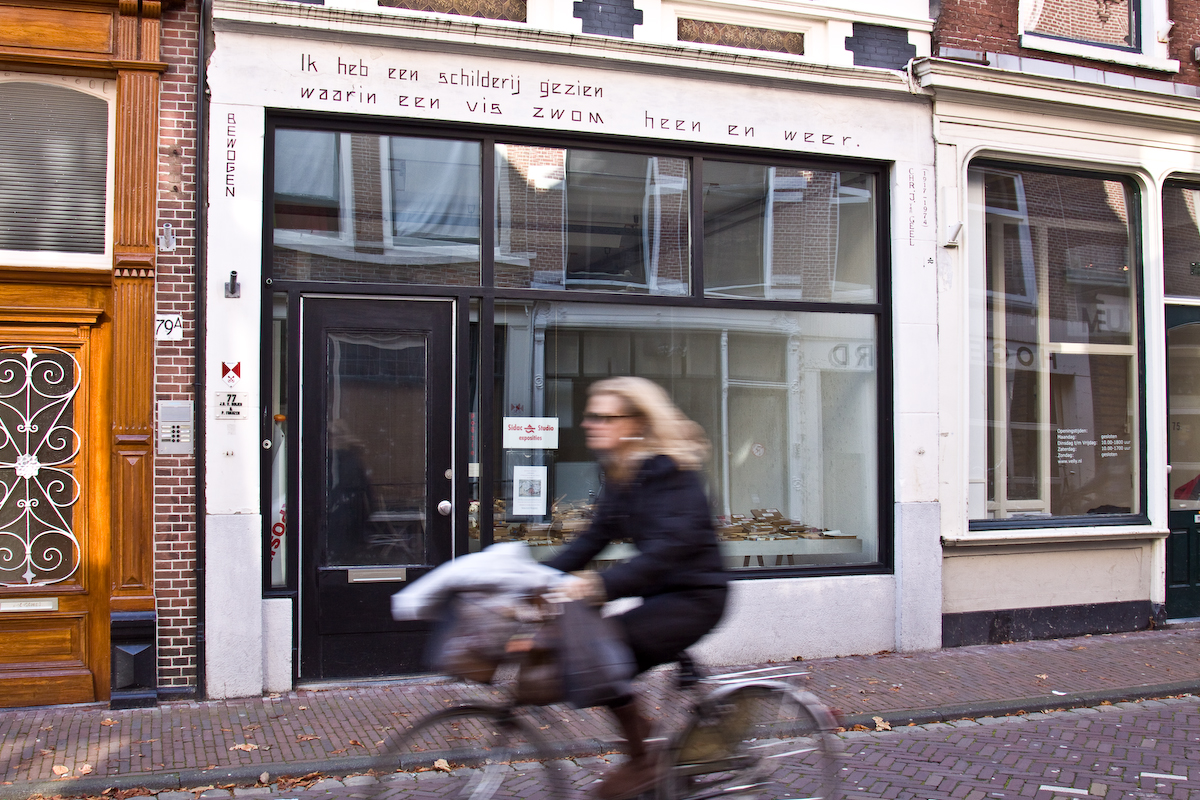 This was the 54th wall poem realized by the TEGEN-BEELD Foundation. The poem was painted on a wall of Hogewoerd 77 in 1997. This address housed the art gallery Sidac Studio from 1995 until 2015. Its owner, Piet Franzen, was an artist and poet himself and wanted a wall poem that was related to the visual arts. It also had to fit on the facade, which was mostly made out of glass and therefore incites an aquarium-like feeling. The poem appears to be a frame for the building: the window becomes a painting and an aquarium at the same time.

Poetry is the stutterer’s greatest dream.

Fire is not unbecoming to art.

His work will teach you to be allergic to intellectual boasting - but its purport has become its purpose, to him it is about what you cannot learn but can experience.

Chris van Geel as a poet was the prince that kissed me awake.

If you become an artist as well, I will break both your legs.

This poem was set to music by the Leiden band Street fable.

I saw a painting the other day
where a fish swam
back and forth.

This entry was written by Het Taalmuseum in collaboration with Ellen van Dilst. The translation into English is by Emma Knapper. The following sources were consulted: