Listen to this poem in Russian.
Voiced by: Natalia Sawicka

Velimir Khlebnikov was fascinated by language. Once, he made a list of all the Russian words ending in ‘-ts,’ and discovered that they all had something to do with ‘revealing.’ This supported his suspicion that the sounds of words were more important than their meaning. Subsequently, it also became one of the most profound principles of the Russian Futurism, the movement co-founded by Khlebnikov circa 1910. One of his first Futurist poems was When horses die, in which the sound emphasizes the difference between nature and culture. Just listen.

Velimir Khlebnikov was born into an artistic family in the south of Russia, and, as a teenager, left for Saint Petersburg to study. There, he emerged as an experimental artist who wanted to break with the past. Khlebnikov even worked on a universal intelligible language based on sounds instead of words.

In 1916, Khlebnikov was summoned to fulfil his military duty in World War I. Soon, he was fed up with the military life in a backup battalion in the south of Russia, and left when the Russian Revolution broke out a year later. From that moment on he lived a wandering life. In 1920, he returned to the military and even traveled to Iran. Once back in Moscow his health deteriorated, and Khlebnikov eventually died at age 36.

The pseudonym Velimir roughly means ‘Ruler of the World.’ In his own days, Khlebnikov was an important figure to many experimental artists, and was once semi-seriously chosen as ‘First President of Globe’ by his kindred spirits. Nowadays, some consider him a genius, while others think that his talent never fully manifested. In any case, Khlebnikov has gained recognition and fame in recent years, especially in his native Russia, where his work has been permanently integrated in high school and university curricula.

When horses die is one of the first poems Khlebnikov wrote as a Futurist. It is, among other things, Futurist because it is not about the content, as was customary then, but about sounds.

Repetition is therefore the most striking aspect of this short poem. In Russian every sentence begins with the same words (kogda umirayut), and ends again with the same sounds ‘at’ or ‘ut.’ Only the last sentence is different: the words lyudi (men) and pesni (songs) rhyme. Khlebnikov not only tells the reader that men deal with death differently than nature does (horses, grasses, suns); the contrast is also accentuated by the sounds of the poem.

At the end of 1908, Khlebnikov made his debut in the magazine Vesna (spring). This magazine was edited by Vasily Kamensky, a progressive figure in the literary circles of Saint Petersburg. Kamensky introduced Khlebnikov to several experimental young artists. They were looking for innovation and called themselves Futurists. In 1912, they published the radical pamphlet A Slap in the Face of Public Taste, in which they took leave of the writers of previous generations. It was time for new poetry. When horses die is one of the first poems written by Khlebnikov after his introduction into these circles. 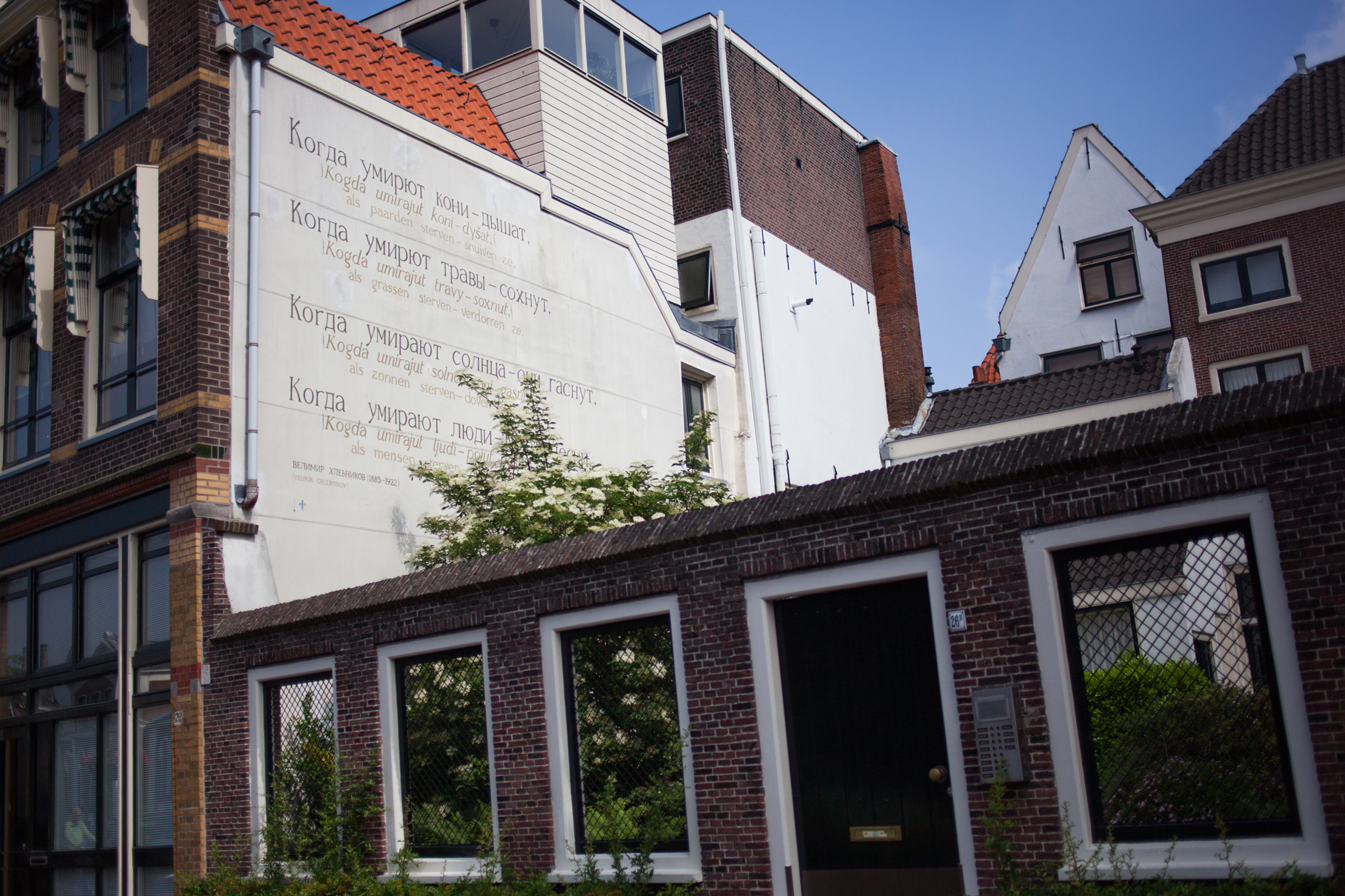 This poem has been on a wall in Leiden since 1996. What is peculiar about it is that the Dutch translation has been added line by line. While painting four times the word умирают, meaning ‘they die,’ Jan Willem Bruins forgot the letter ‘a’ twice, to the lasting sorrow of Leiden Slavists.

In 1912, Khlebnikov was one of the founders of the Russian Futurism, a revolutionary movement spreading the idea that technical innovations had dawned a new age. To this new age belonged a new language, which they called zaoem, meaning: the language which stands behind or above reason.

Many Futurist poems are a cacophony of sounds. The poets also used many ‘heavy’ Russian consonants such as the ‘r,’ ‘sja’ and ‘sjstja.’ Khlebnikov was the first Futurist who succeeded in creating neologisms which were integrated into the Russian language.

Because the Futurists wanted to break tradition, they accepted the communist revolution (1917) with open arms. In the 1920s, however, their enthusiasm diminished. The opposite was not true; the new leaders regarded Futurism as an art form matching with the new communist world order.

Khlebnikov was a semi-insane visionary. He had some spark of genius but, even more so, he was an idiot.

Khlebnikov was the soul, the luminous center, whose artistic rays lit the way for many artists

Jevgenij Kovtoen, biographer and conservator of the Russian Museum in Saint Petersburg

I am a derwisj, a yogi, an inhabitant of Mars, everything, but not a soldier of an infantry regiment

Khlebnikov about his time in the military

When horses are dying

This entry was provided by het Taalmuseum. The translation into English is by Rianne Koene. The following publications were consulted: