Do you speak English with an Irish accent and would you like to recite this poem? Contact us at muurgedichten@taalmuseum.nl!

William Yeats considered himself a true Irishman. As a poet and playwright, he was devoted to creating work that made his people proud to be Irish. Therefore, he looked for inspiration to the mystical landscape and ancient folktales. In 1914, on the eve of Irish independence, he was no longer the only one who drew inspiration from this. New generations were often more radical, and he was offended that they acted as if the idea had been theirs. His vexation is captured in this poem.

William Butler Yeats was raised in a family of eight, who all ended up pursuing an artistic career. It is hinted that his father John played a part in this. He was a portraitist whose work can be found in the National Gallery of Ireland. The Yeats family advocated an independent Ireland and devoted themselves to this cause.

William started writing poetry when he was in high school. He then attended the art academy in Dublin, but dropped out when his first piece of writing got published. Around 1900, he became well known in the literary scenes of London and Dublin. In addition to writing poetry he wrote a lot of plays during this period, for which he drew inspiration from Irish folktales.

In 1916, Ireland declared its independence from the British government. However, it took six years before its own parliament was formed. From 1922, William Butler Yeats was a senator for two terms. He became world famous when he won the Nobel prize for Literature that following year. In his acceptance speech, he mentioned that he did not only see this prize as personal honor but also as a recognition of the newly founded Irish Republic. Yeats continued writing, and after his passing he was considered one of the most influential European authors of his generation.

In this poem, William Butler Yeats complains about copy-cats. This is not done directly but through a comparison with a coat. The coat that he designed himself, meaning: he had developed his own style. He drew inspiration for this from the “old mythologies,” the mystic Irish folktales which had played a prominent role in his work since the 1880s. The coat fit him perfectly and had become his trademark.

But now, new writers and poets started drawing inspiration from folktales and acted like this was an original idea. Let them be, Yeats concluded about the young “fools.” Instead of arguing, he prefered to walk around naked, meaning: if others had to copy him, he would think of something new.

In December 1904, the Abbey Theater in Dublin finally opened. It had been Yeats’s dream for 15 years. Finally, there was a place where Irish theater could be performed. Soon, however, it turned out that not all parties involved agreed on what ‘Irish theater’ was. Yeats had a specific type of drama in mind while others thought that the theater’s main goal should be to adhere to a broad audience and were set on comedy. Several concerns regarding content, politics and personal tensions arose in the following years.

“William Butler Yeats has made a great many enemies among the younger writers in Dublin,” is what his college George Russell (1867 - 1935) wrote in 1909. The youth had shied away from the Abbey theater and gathered in the competing Theater of Ireland. This rubbed the forty-nine-year-old Yeats the wrong way, mostly because they claimed to create ‘true’ Irish works - just as he did. He decided to put them in their place with this short poem, which he published in May 1914. 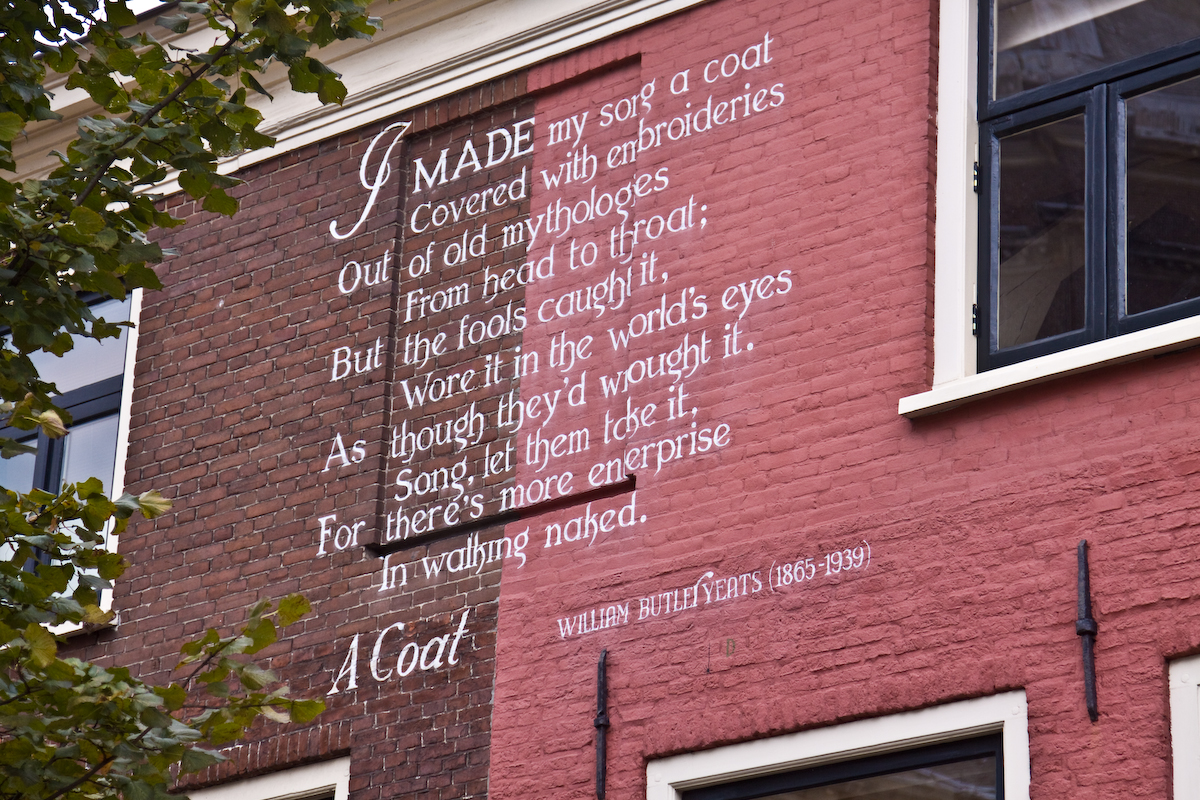 Since 1995, this poem can be found in Leiden on Lange Mare 31-33. It is painted in between two houses on a part of the wall where there once was a window.

I have spread my dreams under your feet.
Tread softly because you tread on my dreams.

The Leiden band Street fable put this poem to music.

I made my song a coat
covered with embroideries
out of old mythologies
from head to throat;

But the fools caught it,
wore it in the world’s eyes
as though they’d wrought it.

Song, let them take it,
for there’s more enterprise
in walking naked.

This entry was written by Het Taalmuseum in collaboration with Ingeline (Pink) Meltzer. The translation into English is by Natasja Oorthuis. The following publications were consulted: