A gaggle of black swans in the Dutch polder stirs the imagination. Paul Marijnis describes them as coquettish ladies parading around pertily. Seemingly bored, but simultaneously rather self-confident and stylish. They are just like humans.

Paul Marijnis was twenty years old when he moved to Leiden to study Dutch at Leiden University. From 1970 onward, he worked at a high school for five years until he was fired. According to Leidsch Dagblad (a local newspaper), he allegedly had difficulties with regulations, collaborating in a team, and ended his lessons whenever he saw fit. His dismissal sparked protest among the students, parents and colleagues and it was even discussed repeatedly in the city council. Ultimately, he was allowed to stay but nevertheless left not long after. Subsequently, he worked as an editor for the national newspaper NRC Handelsblad.

Marijnis was 46 years old when he made his debut as an author. He published four novels and two poetry collections, which were both acclaimed. In his writing, he combined melancholy with light-heartedness, like his idol Piet Paaltjens (pseudonym of François Haverschmidt, 1835 - 1894) did a century before him. Marijnis’s poems are full of striking, beautifully-worded metaphors.

Animals frequently recur as a theme in Marijnis’s oeuvre. He describes their movement, sound and appearance with great appreciation. The black swans in this poem are no exception. Marijnis depicts them as vain ladies from wealthy families in beautiful garments who do not do much except flaunt their plumage and admire themselves. The small presence of white; the beak and flight feathers, reminds him of lingerie and lace. The animals are coquettish, ostentatious.

Did Marijnis attribute human characteristics to the swans in this poem, or did he describe people in black clothing and used the metaphor of black swans? Perhaps he recognized something in them? Marijnis grew up in Schiedam, among quite a few Orthodox Christians who wore black when they went to church on Sundays and after someone passed, family members wore mourning-wear for a long period. At the same time, they displayed the need to flaunt small details such as silver or lace. The image is indeed somewhat similar.

Paul Marijnis wrote this poem in 1996. It is unknown whether or not he has actually seen the black swans, the main feature of this poem, in Leiden. Black swans are native to Australia and New Zealand. However, on occasion, they were introduced to the waters of Leiden. If this happened in the mid 1990s, it is likely that Marijnis went to see them. Several poems reveal his admiration for animals and their characteristics. 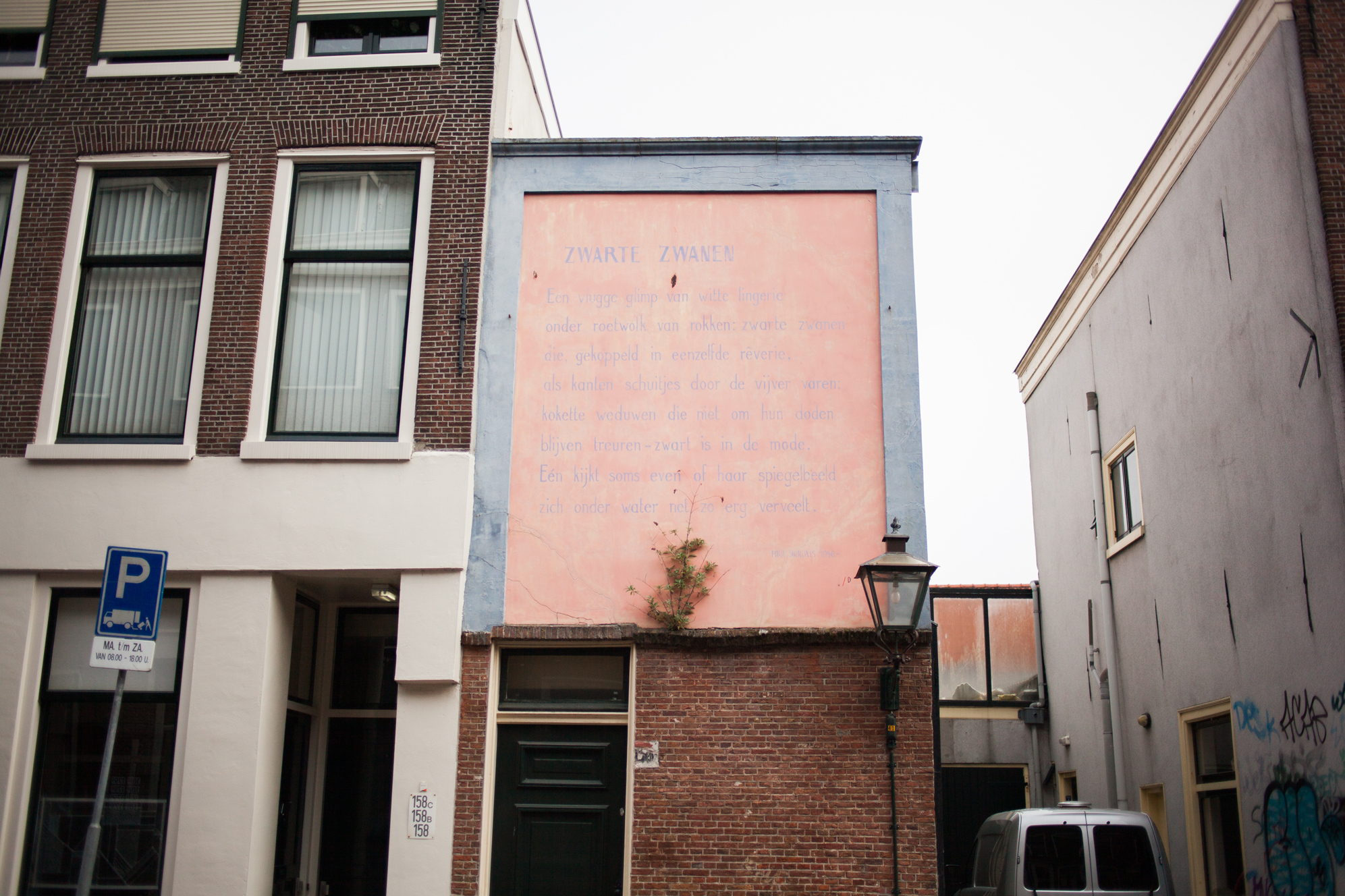 Since his days at university, Paul Marijnis has been a Leiden resident. He lived with his cats Raffles and Toffe in a house on the Gekroonde Liefdepoort, in the very center of Leiden, until his sudden death in 2008.

This was the first wall poem written by a then-living Leiden poet. In the presence of neighbors, students, the mayor and Marijnis himself, the poem was applied to the wall of the building at Hogewoerd 158. The blue letters on a pink background are striking since the poem is about black swans.

Paul Marijnis was an esteemed guest in the cafés of Leiden. The poet often visited the barroom Burgerzaken on the Breestraat for some coffee or wine with friends. In reminiscence of his passing, another of his poems was applied to a wall inside Burgerzaken. Though the title of the poem is Paul, it is not about Marijnis himself, but about the Flemish Modernist poet Paul van Ostaijen, whom Marijnis greatly admired.

PAUL
Ever still on my wallpaper
chimpanzee, canoe, Hinderickxs
The poet dances the Charleston.
The poet drinks, the poet sniffs.
Plays Russian roulette, waves.
Demigod. Dandy. Extremely polite.
He was there, all my life.

Marijnis mainly wants to astound with his ornate imagery.

A review in the Dutch newspaper Trouw

A brief glimpse of white lingerie
under a smog of skirts: black swans
who, linked by that same reverie,
like lace boats drift across the pond:
coquettish widows who won’t mourn
their dead - black is à la mode.
One checks to see if her reflection
beneath the surface is equally bored.

This lemma was written by Het Taalmuseum in collaboration with Nikki de Ruiter. The translation into English is by Demi van de Wetering. The following publications were consulted: