Listen to this poem in Japanese.
Voice: Kiyo Fujiki

The Japanese emperor was during the Heian period (784-1185) in a constant struggle for power with several noble families. By appointing the intellectual, highly-educated Sugawara no Michizane to a key position, he did away with this threat. However, this caused a riot, which eventually led to the newcomer’s banishment. From his place of exile he wrote this poem, in which he reflects on his time at court. For this he used the tanka, a then popular form of poetry which lays emphasis on nature. The plum tree symbolized his loss, but also offered some comfort.

Sugawara no Michizane was a Japanese scholar, poet and statesman. He was born in the year 845, into a family of lower nobility. Michizane studied Chinese literature, after which he rapidly climbed the career ladder at the Japanese court. The emperor encouraged him to publish his poetry, and appointed him as a minister. This was rather extraordinary, as the position had thus far been occupied by members of the powerful Fujiwara family only. They took a stand against this newcomer, and in 901 Michizane was falsely accused of treason. He lost his position and was banished.

Michizane pined away and died less than two years later. Shortly after his death, Kyoto was struck by a series of storms and earthquakes. The imperial elite took this to be the wrath of Michizane. To avert further disaster, he was acquitted post mortem and his honor was restored. He was also deified and given the name Tenjin (sky deity), and a Shinto temple was erected in his honor. In Japan, Michizane is still considered the patron of scholarship.

During the Heian period (784-1185), poets at the Japanese court primarily wrote tanka, a verse of 5 lines with 5-7-5-7-7 syllables, in which the poet expresses himself through naturalistic imagery. The transitoriness of all things lovely (mono no aware), purity and sincerity are recurrent themes in this type of poetry. This wall poem is also a tanka.

Michizane was missing the imperial court of Kyoto, some 700 kilometers East of where he was. He had been in charge there not long ago, but now he was no longer welcome. He longed for the familiar scent of the blooming plum trees of the capital. Yet, it was not only sadness he felt; thinking of nature offered some small comfort. The poem is an ode to nature, bringing about new life every spring.

Legend of the flying plum tree

After Sugawara no Michizane was publicly accused in 901, he was sent to Dazaifu, on the island of Kyushu. Here, he bitterly spent the final years of his life. He longingly looked back on his time at court and felt he had been gravely wronged. He expressed these emotions in pieces of writing and several poems. One of these can now be found in Leiden, as a wall poem.

Sugawara no Michizane in Leiden 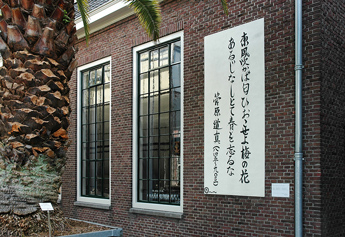 This poem was calligraphed on the wall on 19 April 2002, by Chikako Wijsman-Saga, the wife of university staff member of the Japanese/Korean programme, Paul Wijsman. This is the first official wall poem in Leiden not applied by painter Jan Willem Bruins.

This poem was chosen by Titia van der Eb-Brongersma. She was inspired by a visit to Sapporo: “I walked into a park and saw all these trees and bushes I recognized from back in the Netherlands: Prunus, Forsythia, Aucuba, Kerria, Skimmia, Hortensia. Not all that surprising, in hindsight, as 70 percent of the trees, bushes and plants in our lanes and parks are originally from the Far East.” The Hortus Botanicus, where so many Leiden botanists and biologists have done their research, seemed an appropriate place for this poem.

There has been an official twinning between Leiden and Nagasaki since 2017. However, the tie goes back centuries. The Sieboldhuis in Leiden, for instance, reminds us of the scientific interest in Japan of the nineteenth century. In commemoration of the four hundred years of connectivity between the Netherlands and Japan, the University of Nagasaki donated ume (Japanese plum) to Leiden University in 2009. Several were planted in the Hortus, nearby this wall poem. The blossom of the ume is the Japanese symbol for scholarly knowledge. This symbolic function harks back to Sugaware no Michizane’s family sigil, on which an ume was depicted.

This poem is a ticket to Japan, where the arrival of cherry blossoms brings about nationwide euphoria and where a poet is the patron of scholarship.

Leiden resident Arie de Kluijver, who did the research for this lemma

What society in world history other than Heian would have made a hero of such a wan, cringing pawn as this scholarly court poet who wrote of his pathetic self as defeat closed in: ‘I have become mere scum that floats upon the water’s face’?

When the East wind blows,
let it send your fragrance,
oh plum blossoms.
Although your master is gone,
do not forget the Spring.

This entry was written by Het Taalmuseum in collaboration with Arie de Kluijver. The translation into English is by Anne Oosthuizen. The following publications were consulted: