Listen to this poem in Russian.
Voiced by: Lex van Itterson

Where do you draw the line between the art of painting and poetry? Willem Hussem started out as a painter of landscapes and portraits but from the 1950s onwards his work became more abstract. This way, he hoped to capture the essence of an image, a technique he also used in his poetry. His poems became shorter and more powerful, which is also evident in this poem, in which Willem Hussem uses words to paint the beach of Scheveningen.

Want to know more? On this website you can listen to the poem, discover its origins and its author and find out what the poems means to the people of Leiden.

After having worked in the tobacco trade for about a year as a young boy, Willem Hussem knew for certain he wanted to be an artist. He enrolled at the Academy of Visual Arts in Rotterdam but clashed with his teachers, after which he decided to go his own way. He moved to France when he was nineteen, where he lived and worked until he was thirty-three, painting mostly landscapes and portraits.

Hussem as a modern artist

Willem Hussem returned to The Hague in 1936. After World War II, he became part of the avant-garde movement, which experimented with abstract art. Hussem was one of the more famous Dutch painters of his time: he received several awards, had a solo exhibition and was asked to curate the Dutch pavilion at The Venice Biennale in 1966. His work can be found in prominent Dutch museums for modern art such as the Van Abbemuseum, the Gemeentemuseum Den Haag and Stedelijk Museum Amsterdam.

Hussem as a poet

After his return to the Netherlands, Hussem also started writing poetry. His first collection of poems, De kustlijn (The coastline), was published in 1949. In subsequent collections the sea also plays a prominent role. The beach of Scheveningen, on which this poem is based, was his primary source of inspiration. Hussem mostly wrote short poems in which he ‘painted’ images for which he received the Dutch Jan Campert award for poetry in 1965.

In this poem, Hussem ‘paints’ a picture of the beach. He does this in the same way he would when painting, by accurately placing a few strokes and leaving out anything unnecessary. ‘To put against’, and ‘to wipe’: terms also used in the art of painting. First, he puts up the blue of the sea and the heavens. By wiping the white of the sail, the image comes to life: the wind that is never far from the shore, is now also captured in the image. Can you picture it?

In 1961, twenty years after his previous collection of poems, Hussem published yet another collection named Steltlopen op zee (Stilt-walking at sea). During that time he had developed his own sober style. He made the reader look at all sorts of phenomena in a manner similar to his style of painting. In all of his works, he attempts to get to the core, to capture the essence.

One of the works that earned its place in the collection of poems named Steltlopen op zee was Zet het blauw (Put the blue). He thought the poem so successful that he added it to the anthology of his best works, which he published a few years later.

In the Kaiserstraat, surrounded by old university buildings, is the student residence ‘Huize de Roze Parel’. Bicycles are parked amidst the worn-down couches and arm chairs put out on the street. This is clearly a student biotope. As evening draws near, the sun momentarily breaks through the tall buildings. One by one, students start to ooze from lecture halls and out of their rooms, onto the street. Willem Hussem’s poem brightly sits above their heads. Hussem was a poet and visual artist. He painted pictures with words and watercolor. The spring breeze dances between the flats. The seats are still wet from a brief shower. It’s hardly noticeable with a beer in hand and good company. Students sit along the banks of the Zijl or in little boats on the Kagerplassen. Slowly the red sun sinks below the horizon. 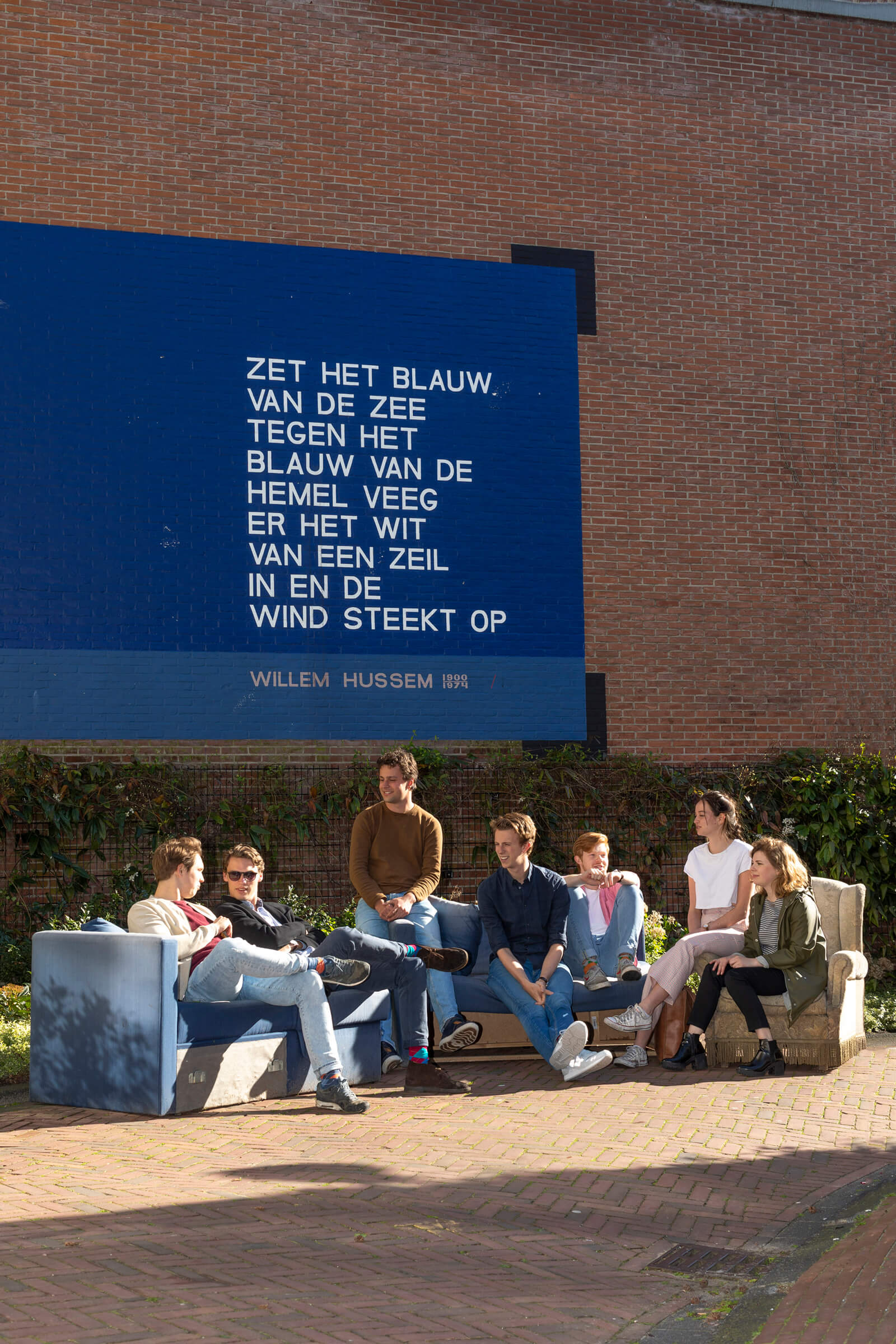 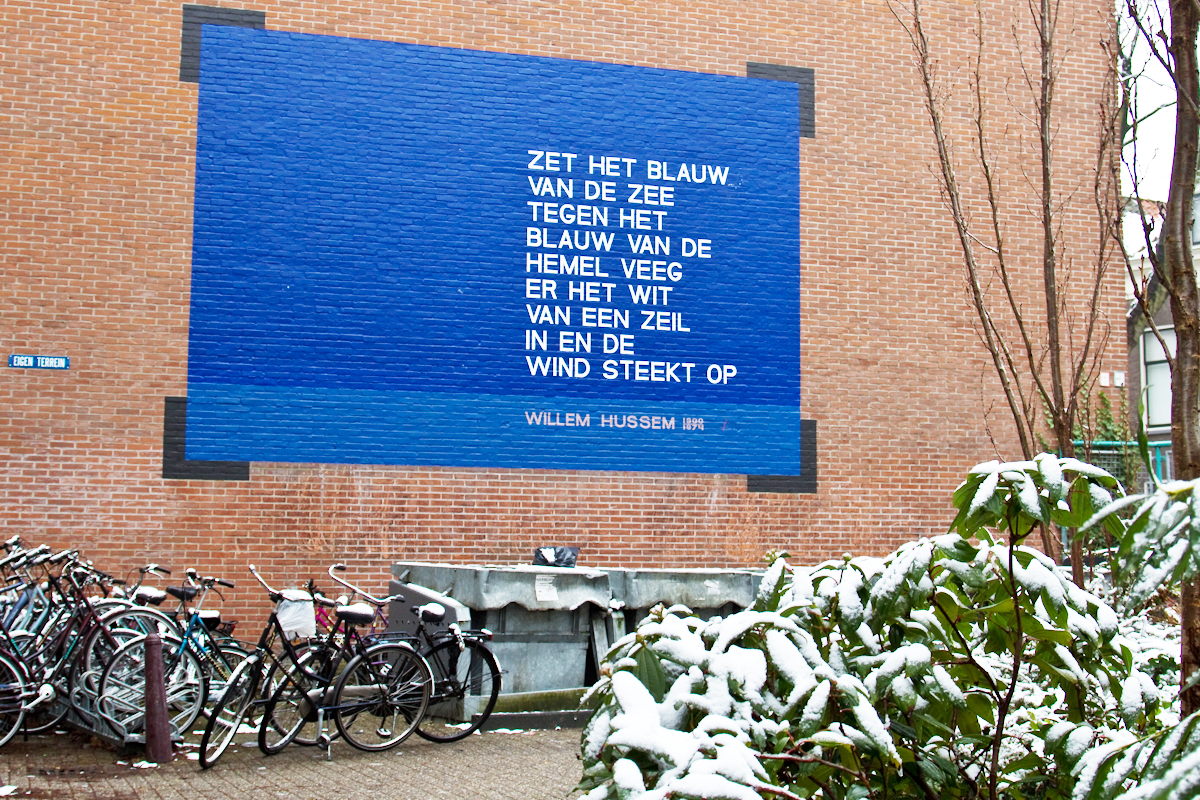 This wall poem was painted onto a student flat in 1994 and was redone in April 2009 to its current design. Ironically, Hussem was completely self-taught: he did not finish any formal education and developed into a all-round painter and poet through experience.

Willem Hussum and The Hague

When Willem Hussem settled in The Hague in 1936, he knew one thing for certain: he never wanted to leave. The story goes that even when he travelled all the way to Groningen, he always made sure to be back in The Hague for cocktail hour.

Hussem had many friends in the culture scene of The Hague; they gathered in their favorite café De Posthoorn. It is in this café that Hussem became the central figure of the so-called Posthoorn-group, a collective of experimental artists.

He presents images not as he sees them but how people might see them if they truly looked.

Characteristic of Willem Hussems’s art is its conciseness.

Hussem in the final year of his life, about his own poems, in verse.
Translation: Natasja Oorthuis

Put the blue
of the sea
against the
blue of the
heavens, wipe
some white
of a sail
in it and the
wind starts to blow

This entry was written by Taalmuseum in collaboration with of Lianne Heslinga. The translation into English is by Natasja Oorthuis. The following publications were consulted: