Are you a native Welsh and would you like to recite Dylan Thomas - Was there a time? Please contact us at muurgedichten@taalmuseum.nl.

Children often can’t wait to be older. But once grown up, we tend to feel nostalgic for our childhood, when life was simple and innocent. Dylan Thomas carried this sentiment with him throughout his entire life. Could this have had anything to do with his lifestyle of alcoholism and promiscuous affairs? Even as an adolescent, he already reveled in nostalgia. This poem, for instance, was written by Thomas in his teenage years, and adapted later for publication in his first collection of poems.

Dylan Thomas grew up in Wales. His father, John Thomas, was an English teacher with a passion for literature and poetry. From the moment his son learned to talk, they shared this passion. Taking after his father, Dylan started writing poetry for the school newspaper at an early age. In 1933 he sent in one of his poems for a BBC poetry competition, and his entry was read live on the radio. Several newspapers and magazines then started publishing his poems, and a couple of years later his first poetry collection, 18 Poems, was published.

Dylan Thomas moved to London. He was 21 when he was introduced to Caitlin McNamara in a pub. It was love at first sight, and the start of an intense and passionate relationship. The couple fought a lot, and were often unfaithful to each other, but got married nonetheless and had three children. Despite the stormy nature of their relationship, Caitlin had a positive influence on Dylan Thomas. She created a quiet, stable environment in which she stimulated him to write daily.

In the 1940s, Dylan Thomas rose to international fame, partly due to his work for the BBC. He wrote film and radio scripts, performed in radio programmes and did the occasional acting. In 1950, Thomas undertook the first of four journeys to America, where he gave several lectures. During the fourth trip, in 1953, he contracted severe pneumonia. Due to his poor physical condition, Thomas died in New York City on 9 November 1953 at the young age of 39.

The themes Dylan Thomas often used in his poetry were nostalgia, life, death, and loss of innocence. The poem Was There a Time combines all four themes. It starts off with a depiction of young children, who forget their worries when something special comes on stage and who are can to cry over something that happened in a book.

Time plays the main part in this poem: growing up will cause you to experience the world differently. Opening up your eyes and ears might leave you feeling unsafe, for there is a lot of pain and suffering in the world. Wouldn’t it be much nicer to stay young and oblivious?

During his high school years, Dylan Thomas was a difficult student. He neglected all his classes, except for English, for which he read absolutely everything he could get his hands on. Being a creative soul, he also wrote his own poetry. Between the ages of 15-19, Thomas filled four notebooks with poems.

These ‘notebook poems,’ written in his teens, Thomas often used as rough drafts for poetry he officially published later in life. In 1933, when he was 18, Thomas wrote the first version of Was There a Time in his third notebook. Two years later, he adapted the poem to a much shorter version which was included in his collection Twenty-Five Poems, published in 1936. 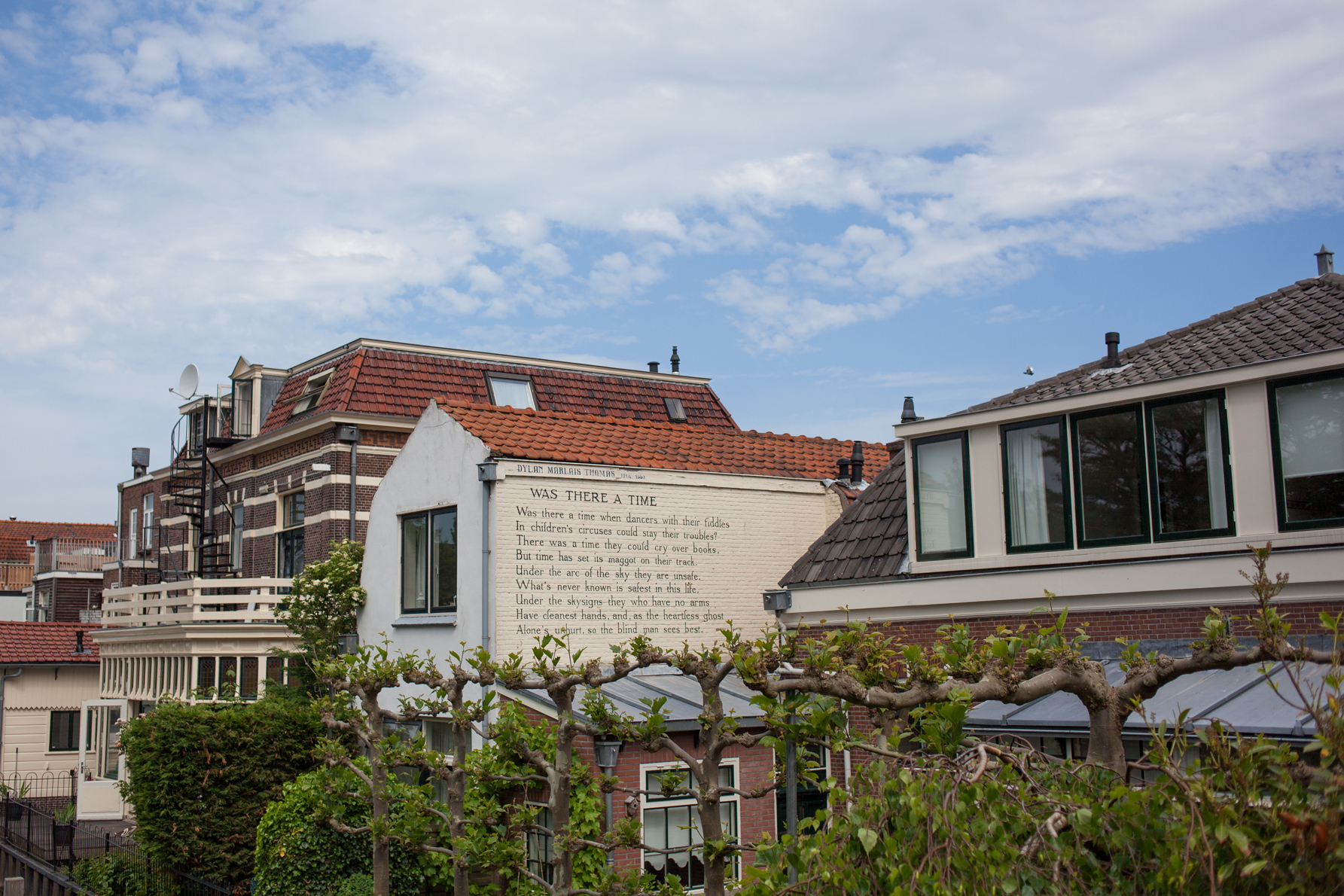 This poem can be found in Leiden since 2003, but can only be admired from the water. It was chosen and painted by Jan Willem Bruins.

Dylan Thomas is often considered the most influential Welsh poet. His birthplace of Swansea pays homage to him with his own museum. Laugharne, where he settled down with his wife after their time in London, is now a major attraction for fans of Thomas’s work.

We have survived him as, we know, his memory will survive us.

He can best be described as suffering from a character neurosis, with increasing depression, dangerous alcoholic acting out, tormenting worry, progressive inhibition, indicating a sense of neurotic helplessness…

An alcoholic is someone you don't like who drinks as much as you do.

Philip Madoc reads Dylan Thomas - Was There A Time.

Was There a Time

Was there a time when dancers with their fiddles
In children's circuses could stay their troubles?
There was a time they could cry over books,
But time has set its maggot on their track.
Under the arc of the sky they are unsafe.
What's never known is safest in this life.
Under the skysigns they who have no arms
Have cleanest hands, and, as the heartless ghost
Alone's unhurt, so the blind man sees best.

This entry was written by Het Taalmuseum in collaboration with Hansje Weijer. The translation into English is by Anne Oosthuizen. The following publications were consulted: