Listen to this poem in German.
Voiced by: Lea Grüter

Writing a poem is never easy, this is something Ingeborg Bachmann knew all too well. Although her career as a poet had been a shining one, by 1964 she was barely writing at all. At the prospect of meeting the 75-year-old Anna Akhmatova, she took up her pen once more. That the subject be poetry itself seemed obvious. To express something truly, or wahrlich, simple language was not enough - it could only result in a “ding-dong of words.” To write poetry is: to choose your words with care, and to stand by what you say.

Ingeborg Bachmann was born in 1926 in Klagenfurt, Austria. Her father was an advocate of the Anschluss (‘joining’), the annexation of Austria into Nazi Germany, and later joined Hitler’s NSDAP. Her entire life, Ingeborg Bachmann was in search of a way to deal with her family’s nazi-past.

The inheritance of nazism

Bachmann studied philosophy and obtained her doctorate with a dissertation on the German philosopher Martin Heidegger, a brilliant yet controversial theorist due to his nazi sympathies. During her studies, she became acquainted with Paul Celan, with whom she had two short love affairs. The two exchanged ideas about language use, the concept of ‘truth’ and the establishment of personal boundaries. Together, they speculated on what sort of language was necessary to describe nazi war crimes.

In 1952, she did her first public poetry reading and her first collection of poems was published a year later. Bachmann was now able to live off her pen, she gave lectures and wrote poetry and even one radio drama. In 1961, she decided to focus on writing novels and short stories. Her last published poems date from 1964, the year in which she met Anna Akhmatova and won the Büchner prize, Germany’s most prestigious award for literature. Ingeborg Bachmann died in her own home in 1973, after a house fire likely caused by a burning cigarette.

This poem addresses the difficulty of writing poetry. The very first line is already a clear indicator: “Wem es ein Wort nie verschlagen hat” (Whoever has not choked on a word) alludes to the German expression “jemandem verschlägt es die Sprache”, to be dumbfounded. The word Sprache is, however, replaced by Wort, touching upon a much greater issue: without words, nothing at all can be said. With these lines, Bachmann presumably refers to the situation of Anna Akhmatova, whose publication permit was revoked for a period of over twenty years.

The language of the poet

This poetic dilemma is made especially clear in the line “auszuhalten in dem Bimbam von Worten” (to survive in the ding-dong of words), with ‘Bimbam’ being the chiming of the bells drowning out all other sound. The bells represent everyday language, and it is the poet’s task to transcend using their own poetic language. True language means: to choose your words with care, and to stand by them. This was a poet’s duty - or anyone’s duty, really.

Biblical and mundane language use in one poem

In this poem, two types of language are mixed together. The title uses Biblical language which, combined with the second line of the poem, forms a Bible quote: “Wahrlich, ich sage es euch” (‘Truly, truly, I say to you’ John 6:47 ESV). These lines are in juxtaposition with everyday language, using clichés such as: “jemandem verschlägt es die Sprache” (one is speechless), “sich zu helfen oder nicht zu helfen wissen” (to be at a loss), “über kurz oder lang” (sooner or later), “den langen Weg nehmen, wo’s der kurze auch getan hätte” (making things more difficult than they have to be) and “das unterschreib ich dir” (I endorse this). These two styles are completely interwoven, rendering them almost indistinguishable from each other.

In 1964, Ingeborg Bachmann was part of the jury panel for the Premio Etna-Taormina prize, an Italian award for international literature. The winner was Russian poet Anna Akhmatova, who was granted permission from the Soviet Union to come and claim the prize. Bachmann was very impressed by Akhmatova’s work and, inspired, wrote the poem Wahrlich, which she read and dedicated to her at the award ceremony. The poem was officially published one month later. It was one of the few poems Bachmann published after 1961, the year in which she decided to focus on writing prose.

On the wall of a corner house on the Nieuwe Rijn is a poem by Ingeborg Bachmann. It is painted above the window of Molly Ackerman and Fred Rohde’s studio. It is a gallery and a studio for painting, photography, calligraphy, video, performance and all kinds of other artistic activities. Expansionist Art. First, create space for yourself. Then share with others, to combat the loneliness. Fred still looks up in wonder at the poem above his shop window. He always discovers something new. Bachmann writes about words. Only true sentences matter. It should be that, or total silence. But you can read in it whatever you want. And everything you can think of. 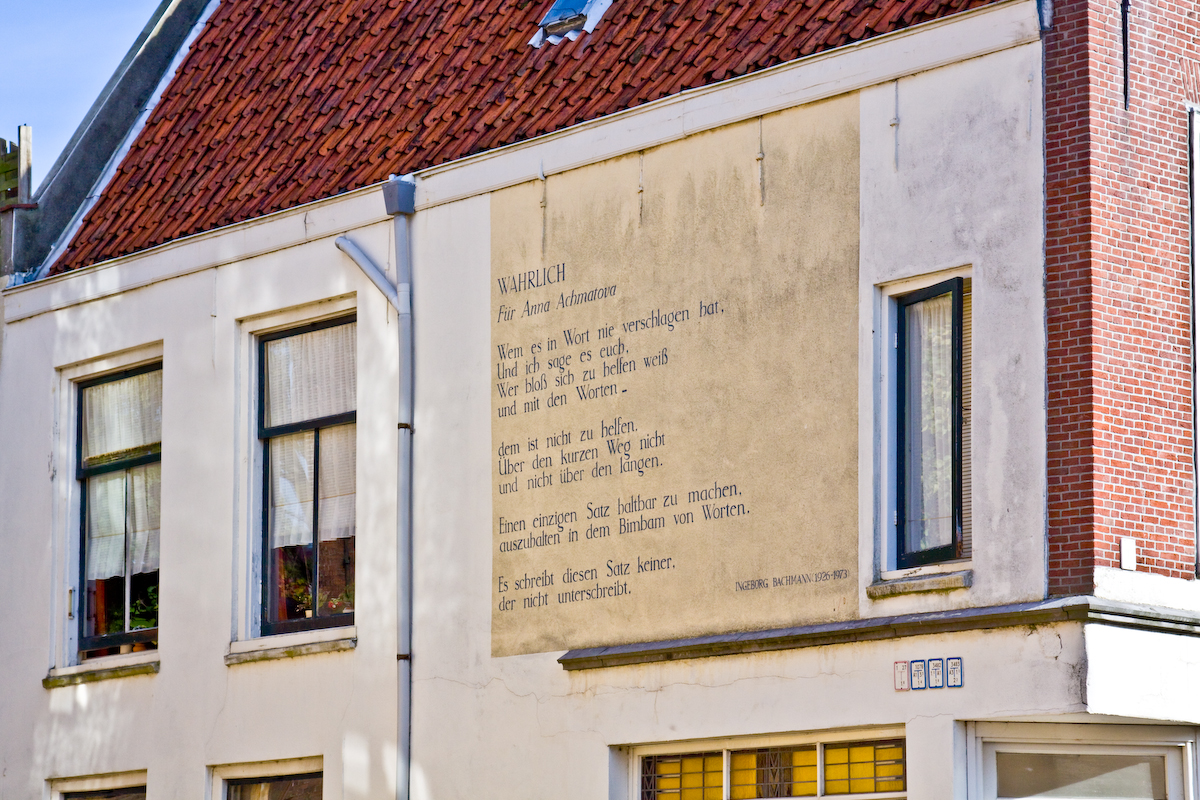 This wall poem was realized in 1993. Although its display is beautiful, it does contain one small error. The first line reads: “Wem es ein Wort nie verschlagen hat”, but in the wall poem the ‘e’ of ‘ein’ has been left out. It is handcrafted, after all.

In addition to Bachmann’s poem, a poem written by Anna Akhmatova, to whom this work was dedicated, can also be found on a Leiden wall. Muza (the muse) adorns the wall at Johan de Wittstraat 57, Leiden. If you are planning to see both you might want to grab a bike, though, as the two poems are 3.2 kilometers apart.

(What is possible, however, is indeed change. And the changing effect, which resonates from new works, nourishes us toward new experience, a new sensation, a new consciousness.)

(Not shyly or stammering, as she had read her own verses in the past, but confident and clear. Anna Akhmatova and her accompaniment of Russian delegates were delighted.)

This was said about the reading of Wahrlich at the award ceremony:

Whoever has not choked on a word,
and I’m telling you,
whoever knows how to help oneself
-especially with words-

cannot be helped.
Not in the short run
and not in the long run.

To make one single sentence lasting,
to survive in the ding-dong of words.

This entry was written by Taalmuseum in collaboration with Chris Flinterman. The translation into English is by Anne Oosthuizen. The following publications were consulted: