Listen to this poem in Early Modern Dutch.
Voiced by: Leo van Zanen

Fake friendships fall apart when the going gets tough. It is only when times get difficult that real friendships spring to life. Jan van Hout spoke from personal experience when he captured this life lesson in this poem: he wrote it for his best friend.

Jan van Hout was twenty years old when he became the assistant of Jacob van Milde, city clerk of Leiden. Two years later, in 1564, he succeeded Van Milde. It formed the basis of a governmental career that rose to a great height after the Siege of Leiden.

In June 1572, Leiden sided with William of Orange, who fought against the lord of the Netherlands, Spanish king Philip II. In 1573 and 1574, the city was besieged and starved by the king’s troops, but without success. Jan van Hout played an important role during the siege and was one of the founders of Leiden University. He became secretary of the university council and was put in charge of the city printing office.

Van Hout advocated the use of the Dutch language at the university. He also often wrote poems in Dutch himself. This was not self-evident: in the 16th century, this language did not enjoy the same prestige as Latin or French. During his life, Van Hout had the status of innovator, because of his use of a relatively new meter, the iamb. In his poems, Van Hout follows every unstressed syllable with a stressed syllable. This ensured a melodious sound.

Jan van Hout’s poem is about friendship. In his poem, Van Hout describes two kinds of friendship. The first four lines consider friendship that is false and only needs a little nudge to break apart in hard times. To the second kind, good friendship, Van Hout dedicates the biggest part of his poem.

According to Van Hout, truly good friendships are made in hard times. Once this has happened, there is nothing that can affect such a friendship. In this poem, he claims that, even after death, friendship remains.

The friendship between Jan van Hout and Jan van der Does struck up during the Siege of Leiden. One year later, Van Hout wrote this poem in Van der Does’s album amicorum and also confirmed the unconditional friendship in prose underneath the poem. It goes without saying that this is a very personal poem. 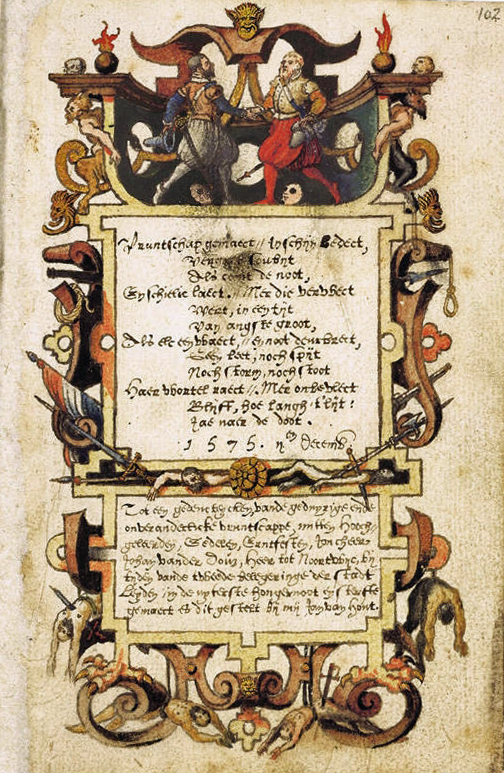 During the Siege of Leiden (1573 – 1574), Jan van Hout and Jan van der Does became close friends. They found a kindred spirit in each other at crisis meetings that took place from time to time. Both were steadfast and wanted nothing to do with negotiations with the Spanish enemy. After the siege, Van Hout was happy to contribute to Jan van der Does’s album amicorum. From his college years in Douai and Paris (1563 – 1566) onwards, Van der Does asked his friends to fill a page. Page 102 was reserved for Van Hout, who wrote a poem about friendship especially for this occasion.

Jan van Hout was probably not the only one who worked on his contribution, because the poem in the album amicorum is beautifully decorated. Although Van Hout was not bad at sketching, this appears to be the work of a professional. The decorated frame depicts two men shaking hands, a sign of friendship par excellence. Above them rests a friendly satyr head - a mythical creature that is believed to keep away evil spirits. The frame also shows two heads that represent life and death. Underneath, the decorations contain references to the Siege of Leiden: gallows, canon barrels, ropes, swords, a Beggars’ flag and victims of battle or hunger. 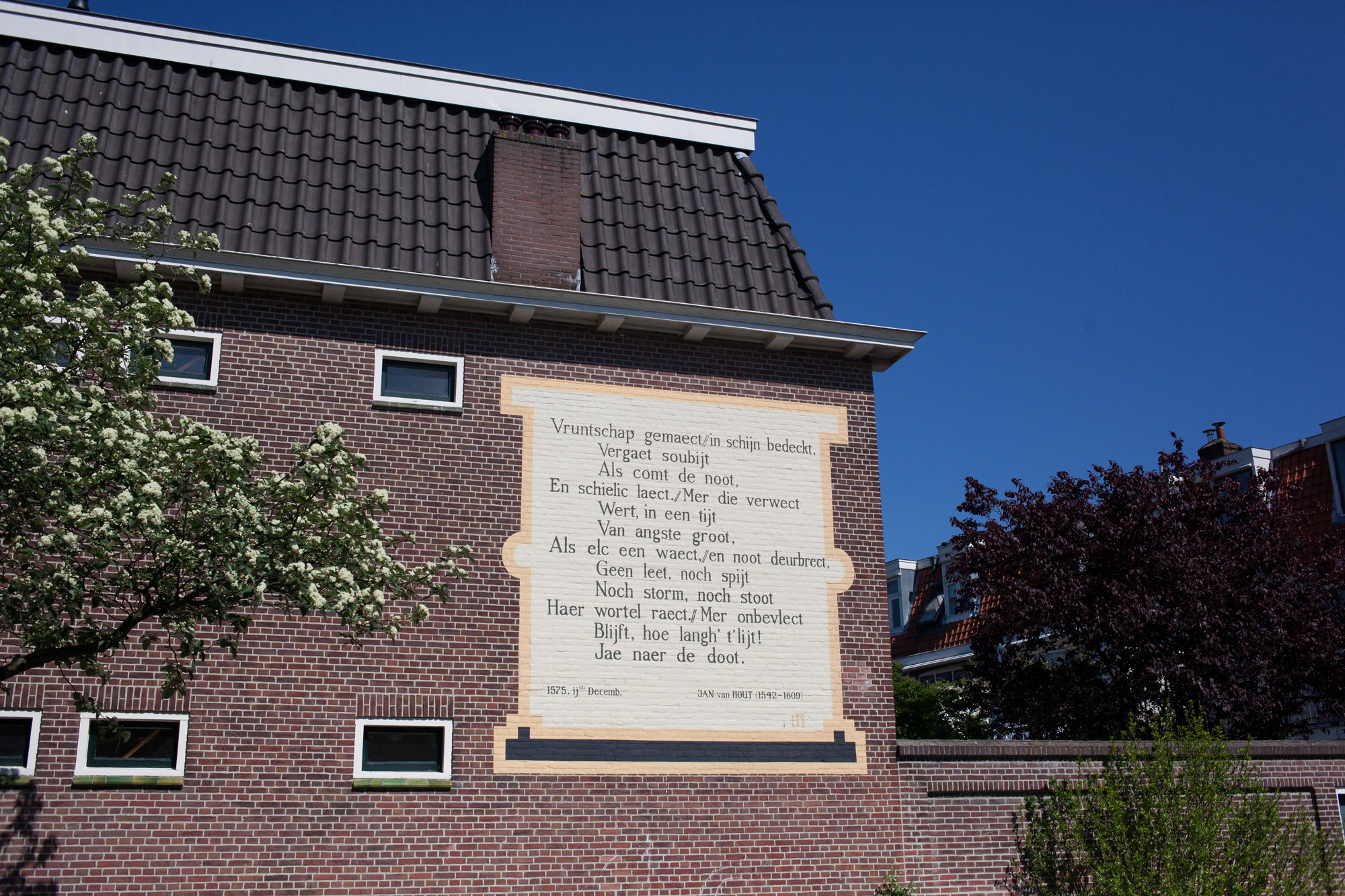 Jan van Hout is inextricably linked to the Siege of Leiden. After the siege, he was one of the organizers of the commemoration, from which the 3 October Festival arose. He also wrote Der stadt Leyden dienst-bouck (‘service book of the city Leiden’, 1602), hymns about the relief of Leiden.

This wall poem can be found at Buitenruststraat 1 in Leiden since 1993. It was the 33rd wall poem that was realized by the TEGEN-BEELD Foundation.

Jan van Hout is inextricably linked to Leiden. This is because of his position as city clerk and the role he played during the Relief of Leiden. This is also the first thing that people from Leiden will tell you when you ask them about Jan van Hout. In Leiden you will encounter other places besides this wall poem in memory of him, such as street names and the monument at the Plantsoen park.

After the siege, Van Hout also played an important role in many issues revolving around urban life in Leiden. For example, he was the secretary of curators of the university that, after the relief, was the first university of the Netherlands. Besides this, he also busied himself with reorganizing poor relief and he wanted to establish a useful way of punishing criminals, just like in Amsterdam. He also supervised the city printing office and essentially was the city archivist.

“Maybe it would have better pleased poetry experts if I had written my poem in French [...] our language was first used by the great poet Jan van Hout.”

Friendship made // veiled in pretence
Dissolves at once
When disaster strikes,
And passes quickly.// But if begot
In times of
Fears so great,
When each a guard,// and need arises,
No grief, nor rue
Nor storm, nor blow
Her roots affects//. But unblemished
It remains, as time goes on!
Yes, after death.

This entry was written by Het Taalmuseum in collaboration with Sophie van Aardenne. The translation into English is by Jasmijn van Dongen. The following sources were consulted: