The kite is a fascinating object: it glides at great heights, looking like a dancing shadow. Flying a kite feels like you are controlling the universe for a moment. Artist Kees Buurman painted many kites in the nineties. In this poem, he explains the feeling he gets when he flies a kite: it gives him butterflies in his stomach. Or rather: kites!

Kees Buurman was supposed to succeed his father in the family printing business, but during his education in Amsterdam, he discovered he would much rather be a visual artist. He studied arts at the Royal Academy in The Hague and returned to Leiden to start working in a studio. Successfully so: in the seventies, his work attracted more attention and was exhibited all over the country, for example at the Stedelijk Museum Amsterdam and Museum de Lakenhal in Leiden. Buurman did not only create art, but also taught classes in visual arts. He started off in Leiden, but later also taught in Groningen and Kampen.

Buurman was very interested in oriental philosophy, in which he found inspiration for his art and poetry. His first collection Een cirkel in ’t zand (‘A circle in the sand’, 1982) consisted of haikus, a Japanese form of poetry. His hobbies archery and kite flying often returned in his work as well. In the last years of his life, Buurman almost exclusively made kites, in order to ‘paint the skies’.

This poem talks about an object that Kees Buurman was fascinated with: the kite. In the last years of his life, he designed multiple kites. ‘What I am trying now is to create objects that have a common practical value and to charge these with content and a power of expression’, he explained. He also created paintings in which kites played a role.

In this poem, Buurman describes what makes kite flying so special to him. A kite goes so far up, that it can make the night sky visible. It looks like a dancing object because of its movements in the air. It emanates so much power that the kite flyer’s two feet are firmly put on the ground. When you are flying a kite, you can imagine controlling the whole universe for a moment. Kite flying gives you such a good feeling that it gives you butterflies - ‘while in my stomach a kite flutters like a butterfly’, Buurman writes.

Visual artist Kees Buurman started writing poetry around 1980. In 1982, his first collection Een cirkel in het zand (‘A circle in the sand’) was published, followed by the collections Zonder een einde (‘Without an end’, 1985) and Monnik en Krijger (‘Monk and Warrior’, 1986). Buurman also wrote poems that were not published during his life. Some of those were posthumously collected and published in 2003 by the Leiden publisher company Kopwit, titled Adem (‘Breath’). This collection also includes Vlieger (2), which is a poem of remarkable form, because Buurman usually preferred the haiku structure. 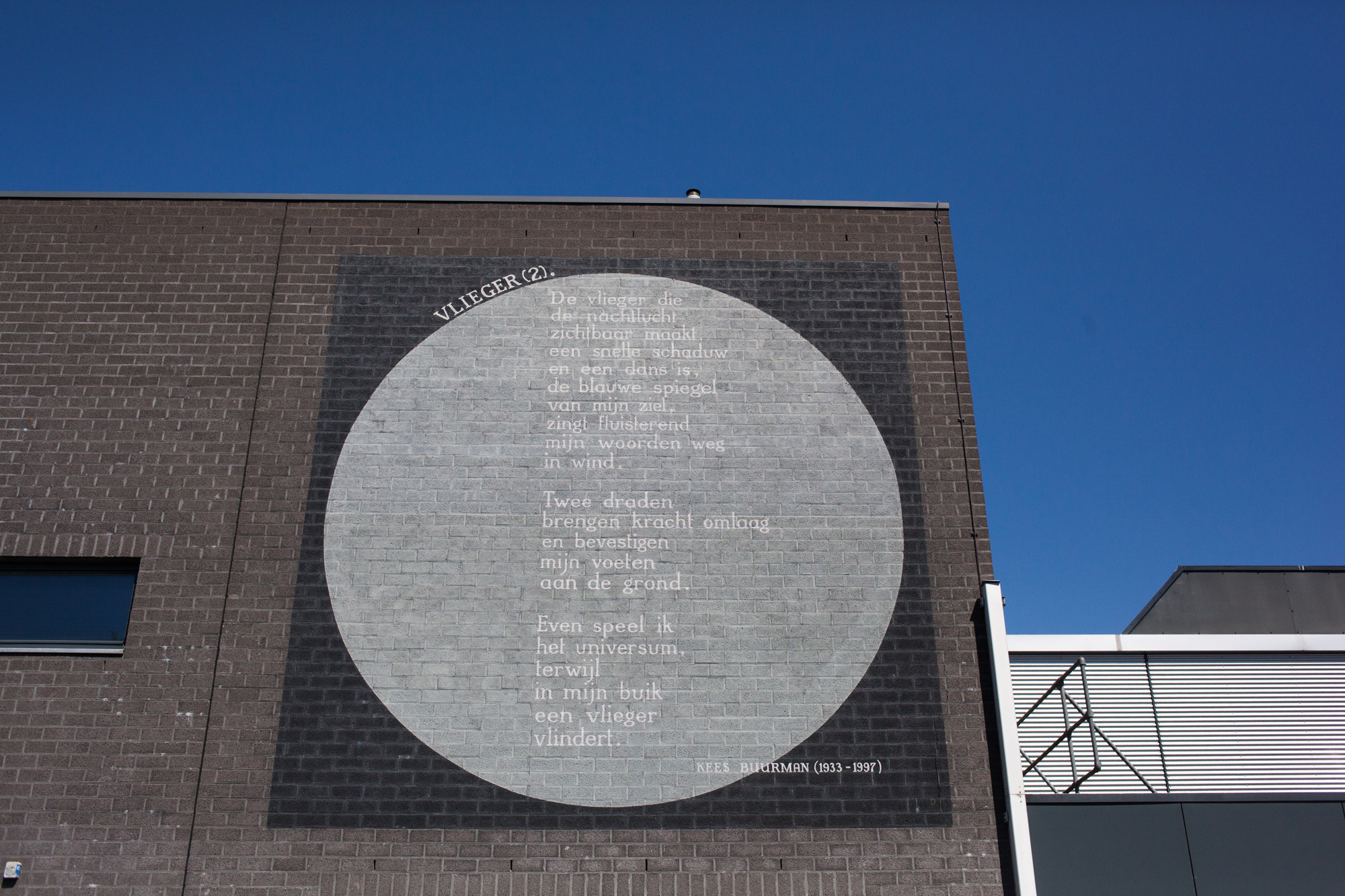 Kees Buurman lived and worked in Leiden for virtually his entire life. Before he began his professional career as a visual artist, he had already joined the Leiden arts association Ars Aemula Naturae.

Buurman has exhibited his work in Leiden multiple times in his life, such as in the Sieboldhuis and Museum de Lakenhal. In 2000, the latter museum devoted a retrospective exhibition to him, simultaneously with the realization of the wall poem. Several artworks of Buurman can be found on walls in Leiden too.

The wall poem Vlieger (2) was painted on the side wall of Broekplein 2 in Leiden in October 2000. It was the 78th wall poem realized by the TEGEN-BEELD Foundation. This wall poem honors Kees Buurman as an resident, poet and artist of Leiden. The visual design of the poem is after the fashion of Buurman, characterized by geometrical shapes and the combination of black and white.

In my second year, I was introduced to the painter Kees Buurman. I visited his studio - and that changed my life.

The kite that makes
the night sky
visible,
that is a quick shadow
and a dance,
the blue mirror
of my soul,
whispers and sings
my words away
in wind.

Two threads
bring power down
and fasten my feet
to the ground.

For a moment, I play
the universe,
while in my stomach
a kite flutters
like a butterfly.

This entry was written by Het Taalmuseum in collaboration with Nikki Spoelstra. The translation into English is by Emma Knapper. The following sources were consulted: