Listen to this poem in English.
Voiced by: Rick van Vliet

What is considered valuable, and how do you take care of it? Williams’s patients probably had a mostly practical view on this. In this poem he makes light of the importance of love and culture while using the language of his townspeople. Riposte was the first poem in which Williams no longer wished to write elegantly or academically but instead more like the common people.

Williams grew up in a family that greatly valued literature, poetry and art. He studied medicine, and was a pediatrician at what is now St. Mary's General Hospital in New Jersey for almost his entire life. He started writing during his medical studies. During the day, he worked as a doctor and at night he wrote poems, short stories, plays and essays.

During his studies and his first years of his medical practice Williams visited New York frequently and got acquainted with several innovative artists. The one who impacted his work the most was Ezra Pound on which Williams later wrote: “before meeting Pound is like B.C and A.D”. Pound played an important role in the publication of Williams’s second book The Tempers in 1913, with which he gathered fame among a wider audience.

From 1920 onward, Williams was determined to go his own way. He was in search of real American poetry. According to him, this should focus on American colloquial speech and could be found in everyday life in the United States. Williams was often inspired by stories from his patients and the conversations he had with them. During his final years, many young poets perceived him as an example and occasionally he acted as a mentor. The validation he received for his work increased and in 1963 he was awarded the Pulitzer prize for his last poetry collection Pictures from Brueghel, and Other Poems posthumously.

During his student days, Williams was part of the fencing team of the University of Pennsylvania. The title of the poem, Riposte, is a fencing term, a counter maneuver and in a bigger sense of the word also a sharp reply in a conversation or debate. What is the speaker’s (Williams perhaps) conversation with his fellow townspeople about?

The conversation is about value. How do you do take care of something that is of great value? If it relates to material possessions, it is common sense to store them away in a safe or in the bank. However, this is not possible for things of emotional value. For instance, the fact that love and poetry are not stored away but are shared is what makes them so valuable.

What good do love or poetry do us? This is what the townspeople seem to wonder. Their value cannot be counted after all. A little mockingly, the poet points out that love and poetry are as cleansing and effective against “evil gasses” as water and air. They should be regarded as of such high value that it would be wise to keep them safe, which is commonly done with ‘real’ possessions of value.

For years, Williams tried to write like his literary heroes, first like John Keats and later Ezra Pound. After his second poetry collection he decided to break away from the conventional idea of using poetic language, the commonly accepted forms of a ‘real’ poem and the academic elite norms of quality ‘good’ literature should have. In 1913 he started his quest for this new poetry.

Through his work as a doctor, in which he came in contact with people from all kinds of backgrounds on a daily basis, William concluded that poetry should not only be for the elite but also accessible to a wider audience. He now saw American colloquial speech as a source for authentic, real-world poetry. The collection of poems Al Que Quiere! from 1917 which included the poem Riposte is part of the first collection of poems which Williams wrote from this perspective. 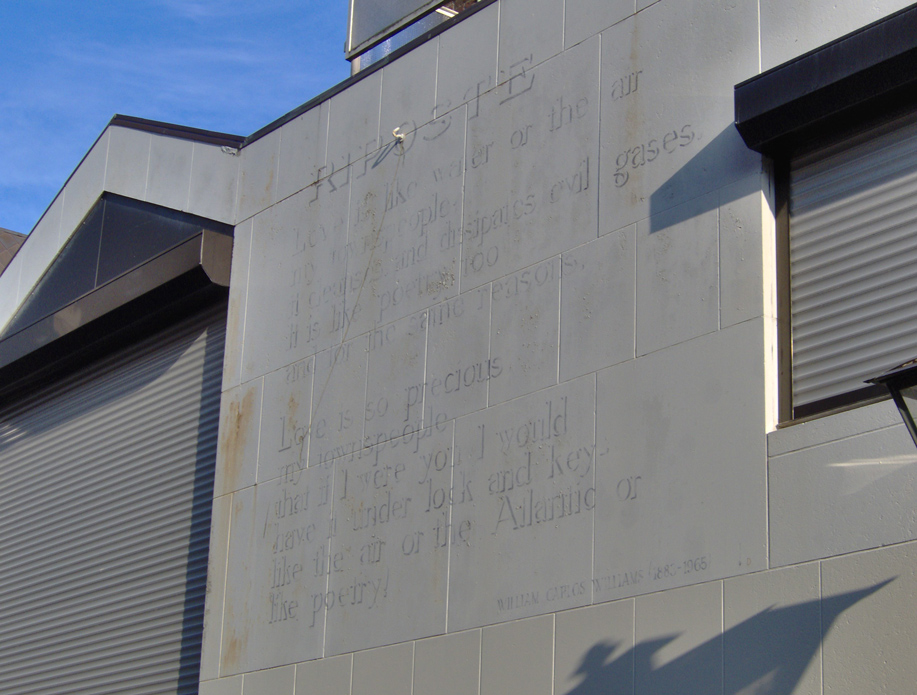 This poem could be found in Leiden at Breestraat 81 from 1996. Unfortunately it has disappeared.

Williams was the most important literary doctor since Chekhov

No Ideas but in Things

This sentences, taken from Williams’s poems A Sort of a Song and Patterson, became his mantra and inspiration for his followers.

I have no interest in the speech of the English country people, which has something artificial about it. Instead I seek a language modified by our environment, the American environment.

I was determined to use the material I knew

This poem was put to music by the Leiden band Street fable.

Love is like water or the air
my townspeople:
it cleanses, and dissipates evil gases,
it is like poetry too
and for the same reasons.

Love is so precious
my townspeople
that if I were you I would
have it under lock and key -
like the air or the Atlantic or
like poetry!

This entry was written by Het Taalmuseum in collaboration with Rick van Vliet. The translation into English is by Natasja Oorthuis. The following publications were consulted: