Listen to this poem in Brazilian Portuguese.
Voiced by: Roberta Bertini Viegas

In 1973, Carlos Drummond de Andrade wrote the poem Papel (Paper). It seems to express his frustrations about the governmental situation in Brazil. After the coup in 1964, the country had become a military dictatorship. In this poem, Drummond compares the constitution, which was partly abolished, to a simple, worthless piece of paper. With this, he criticized the current situation, just like other poets and writers of that time. How could something as important as the constitution simply be thrown out? How vulnerable is a piece of paper?

His poems are about everyday matters and contain a large amount of irony and pessimism. Love and writing poems are also important subjects. His work is often divided into three periods: the attempt to get to know yourself and others, a return to the past, and a projection of this on the future. On the side, he wrote various essays and short stories.

Stone in the road

Drummond de Andrade was a rebellious mind and is one of the most famous Brazilian poets. Still, his work is read often and the first lines of his poem No meio de caminho (‘In the middle of the road’) grew into a well-known proverb.

This poem is about freedom. From 1930 to 1945, Brazil was a military dictatorship, and in 1964, the military seized power once again. When Drummond de Andrade wrote this poem, he was about 70 years old and he had lived approximately one third of his life under dictatorial regimes. As civil servant and intellectual, he saw from up close what this meant: oppression, violence and the setting aside of rights.

The title of the poem, Papel, refers to the Constitution. This states basic rights. It is the most important document when it comes to the protection of the individual against the government. The constitution is therefore an important symbol, but in itself, it is nothing more than a piece of paper with text on it. This is how it was sometimes treated by the Brazilian government: the constitution was edited and suspended according to their own discretion. Then, it is worth nothing more than wrapping paper.

Possibly, Drummond de Andrade did not only mean the constitution, but also wanted to address paper as a carrier of information, knowledge and facts in general. Censorship was imposed on Brazil: whatever ended up in newspapers and official documents was not necessarily the (whole) truth. In the first lines of this poem, he makes clear that everything he thought, learnt and made was paper: newspapers, books, poetry collections. But if there is no freedom, but only manipulation, if you cannot say what you want, then what is it worth? Would it not be better to rip it into small pieces and make papier-mâché out of it?

From 1961 onward, Brazil was led by a left-wing president. His plans for a radical reform were viewed with anxiety by the Establishment, and in March 1964, part of the army command rioted. After the coup, military leaders’ initial plans were to only complete the term of office, but they were ultimately in charge of the country for over two decades.

As of 1968, more radical generals rose to power. The constitution was now suspended, censorship was tightened, the president gained dictatorial powers and parliament was put on the sidelines. A much tougher stance towards political opponents was also adopted. Especially protesting students were punished. This period was also called the ‘Years of Lead’. The ultimate low was in 1973, when major protests took place, partly because Brazil was hit hard by the oil crisis during that year. In that same year, Drummond de Andrade published his collection As Impurezas do Branco (The Impurity of the White), containing Papel.

What do you think the writer wants to say with this poem?
“I hardly ever try to understand poetry (intellectually), usually I have a more emotional approach to it… in this case the poem made me smile. Especially because of the sonority caused by the repetition of the word ‘papel’. I interpreted it as an observation of how linked to the paper is our life (or was before the internet): news comes through the newspapers, learning through books, communication through letters, gifts wrapped in paper, even the life taking place inside a house is surrounded by wallpaper…”

Do you also think that the topic of the poem is the constitution that was abolished during the military dictatorship in Brazil from 1964 till 1985?
“I never thought about it this way… but now that you’ve mentioned it makes sense!! If I’m not wrong, the poem was written in 1973, during the “anos de chumbo” (“years of lead”/ "led years", my own literal, very bad, translation!), the most repressive period of the military dictatorship in Brazil (the Médici government from October/1969 to March/1974), marked by the repression and torture conducted in the "basements" of the dictatorship. “The period stands out for the fierce fight against the extreme left, and the repressive police-military apparatus of the State, eventually supported by paramilitary organizations and large companies.”
I don’t remember learning about this connection at school, but I makes sense!

Is the writer, Carlos Drummond de Andrade, a famous writer in Brazil? How do people look at him?
“Definitely! I believe he is the most famous poet in Brazil, closely followed by Vinícius de Moraes. His most famous poem is “In the middle of the path”, from which every Brazilian knows the fist sentences: “in the middle of the path there was a stone, there was a stone in the middle of the path”, people use it as an expression (referring to obstacles in life) and sometimes don’t even know it is a poem!
I look at him as this very gentle, wise and thin old gentleman, who was able to write about simple things in a very carrying simple way, but at the same time very critical and ironic. He was one of the most relevant poets of the Brazilian modernist movement.

“In Drummond's case, the free metrics of his poems, without the use of rhymes and lack of uniformity of the verses, are some of the factors that make him different. Finally, his concrete poetry (that is, the one that uses the graphic availabilities that the words have, without concern for the traditional aesthetics of objective, popular language and beginning, middle and end) are a few other pillars that support the works of Drummond, always holding the freedom of writing, tempered with certain hints of sour sarcasm.”(google translation from: https://www.altoastral.com.br/carlos-drummond-andrade/)

Do you like the poem? Why (not)?
“Very much! As I mentioned in the first answer, it made me smile, and after considering the connection with a criticism of the dictatorship I liked even more!! It adds another layer, besides the initial emotional one, and makes it even more interesting! I had a Brazilian Literature teacher that used to say that Brazilians should thank the military dictatorship for some of our most creative and genius artists, because they had to be very inventive on ways of criticizing the government in order to avoid censorship, she was referring to Chico Buarque (composer/singer) but Drummond easily fits this group.” 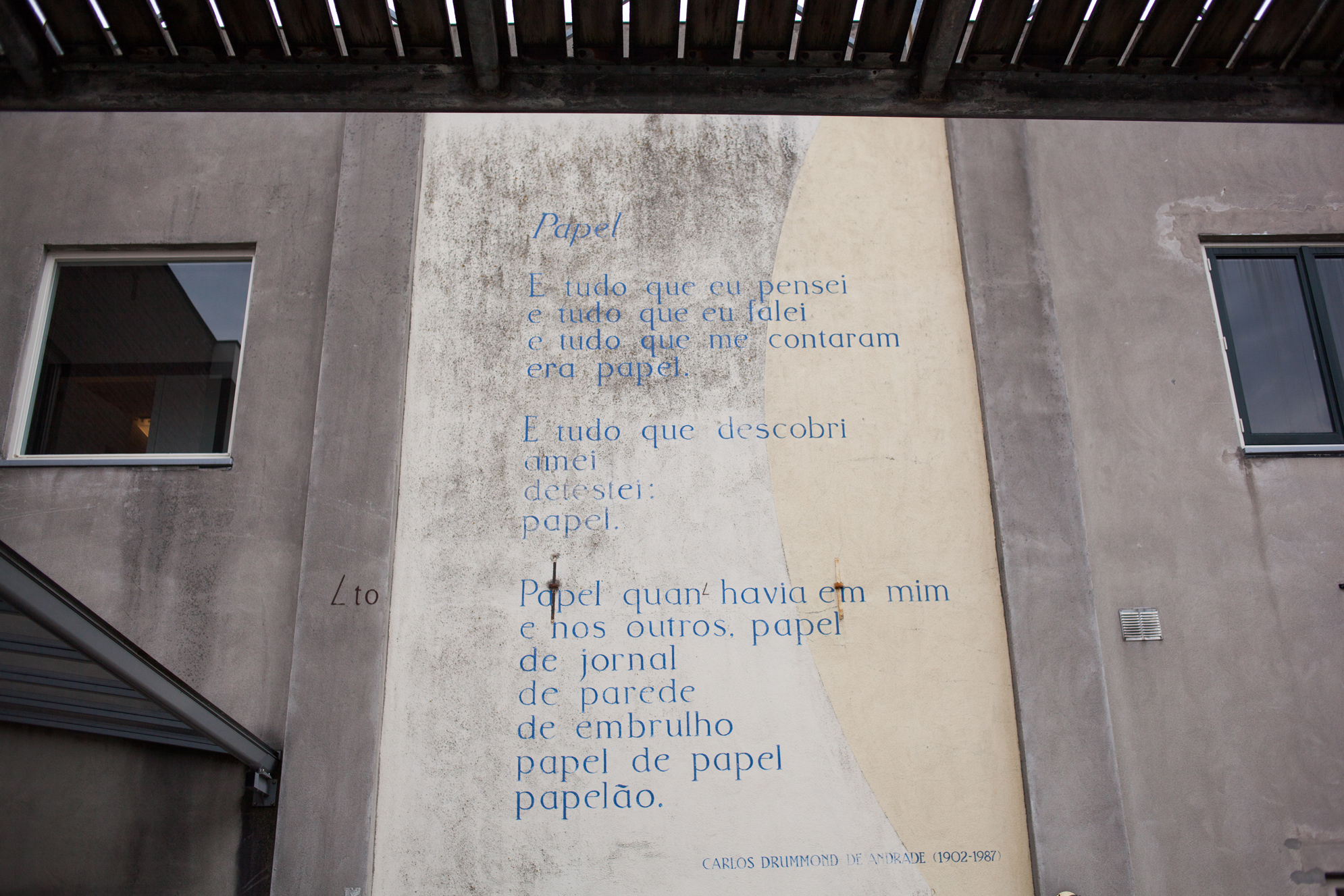 This poem can be found in the courtyard of Middelstegracht 87 in Leiden since 1993. It was the 16th wall poem realized by the TEGEN-BEELD Foundation.

Poetry is necessary, but is the poet?

Drummond de Andrade is widely considered the greatest poet in the history of Brazil. He is a sophisticated and cerebral poet who speaks in many registers. He is by turns melancholy and ironic, sentimental and self-deprecating, remote and boyish

I had a teacher that used to say that Brazilians should thank the military dictatorship for some of our most creative and genius artists, because they had to be very inventive on ways of criticizing the government in order to avoid censorship. Drummond easily fits this group

Roberta Bertini Viegas , who voiced the poem for this website

Paper everything that was in me
and in the others, news-
paper
wallpaper
wrapping paper
paper-paper
papier mâché.