Are you a native speaker of Nigerian English and would you like to recite this poem? Contact us at muurgedichten@taalmuseum.nl!

Chris Abani, a Nigerian writer and poet, works his magic on language to make his voice heard. His poems were not very well-received by those in power; as a result, he was jailed several times where he was maltreated and saw people being tortured in horrible ways. In Ode to Joy, he tells the story of a fourteen-year-old boy who meets a horrendous end: tacked by his genitals, the boy bleeds to death after three days.

Chris Abani is a writer, poet, musician and a professor of English. He was born in Nigeria to an Igbo father and an English mother. When he was eighteen months old, the Biafra war began in which the predominantly Christian Igbo in the northern region of Biafra wanted to break away from the Islamic Nigerian government. Famine was used by the regime as a way to exert power. “I remember things like having to hunt for snails and bush meat,” is what Abani recalled later.

At school no attention was paid to the war, and according to Abani this was because the Nigerian government wanted to prevent new generations from becoming rebels. One of his teachers ignored the regime and inspired Abani to write his first novel, Masters of the Board, which he wrote when he was only sixteen years old. It was the beginning of a period in which he regularly published critical work and arrest was constantly lurking. As a member of a ‘guerrilla-theater group,’ he performed critical shows in front of public buildings. In 1991, he fled to England, and has been living and working in the United States since 1999.

The horrors Abani experienced in the Nigerian jail inspired him to write many stories and poems. He compiled these poems in the poetry collection Kalakuta Republic (2001) in which Ode to Joy can be found. This poem made a profound impression and made him widely known. He now has six novels and seven poetry collections to his name.

“I was completely terrified, completely broken,” Chris Abani said in 2007 about his imprisonment at the Kirikiri Maximum Security Prison in Lagos, Nigeria, between 1985 and 1991. “It wasn’t until later, when I was imprisoned again, that I understood the real meaning of torture, and how easy your humanity can be taken from you.” In Ode to Joy, Abani describes a particularly cruel incident: the death of John James.

In the first stanza we are introduced to fourteen-year-old John James. He is tied to a chair and is roughly being questioned, but refuses to sell out an innocent man. He is tacked to the chair and, as a result, bleeds to death. To honor him, the other prisoners start to sing battle cries in Igbo, the language of the rebels in Biafra. The guards react as if being stung by a wasp: the prisoners are tortured, and guns, knives and truncheons are used to silence them.

John James was Abani’s cellmate and is present in more of Abani’s poems. In the poem Buffalo soldier, he tells that James’s father was a colonel who fled to Chad, after which the regime imprisoned and tortured his son. James cried every night in the week before his death. Ode to Joy describes how he eventually was brutally murdered.

In 1984, Chris Abani published his first novel, Masters of the Board, in which he described a fictional coup against the Nigerian government. When an actual coup was thwarted a year later, and the main conspirator was in possession of the novel, Abani was arrested. He was in jail from December 1985 until May 1986. One year later, he was arrested once more and spent nine months in the Kirikiri Maximum Security Prison in Lagos; this is also where he was imprisoned in 1990 and 1991 and was even sentenced to death. Thanks to friends who bribed the guards he was able to flee to England. There he wrote stories and poems on his experiences in jail such as Ode to Joy, in which he lingers over his cellmate, the fourteen-year-old John James who died a martyr’s death between April and July 1991. 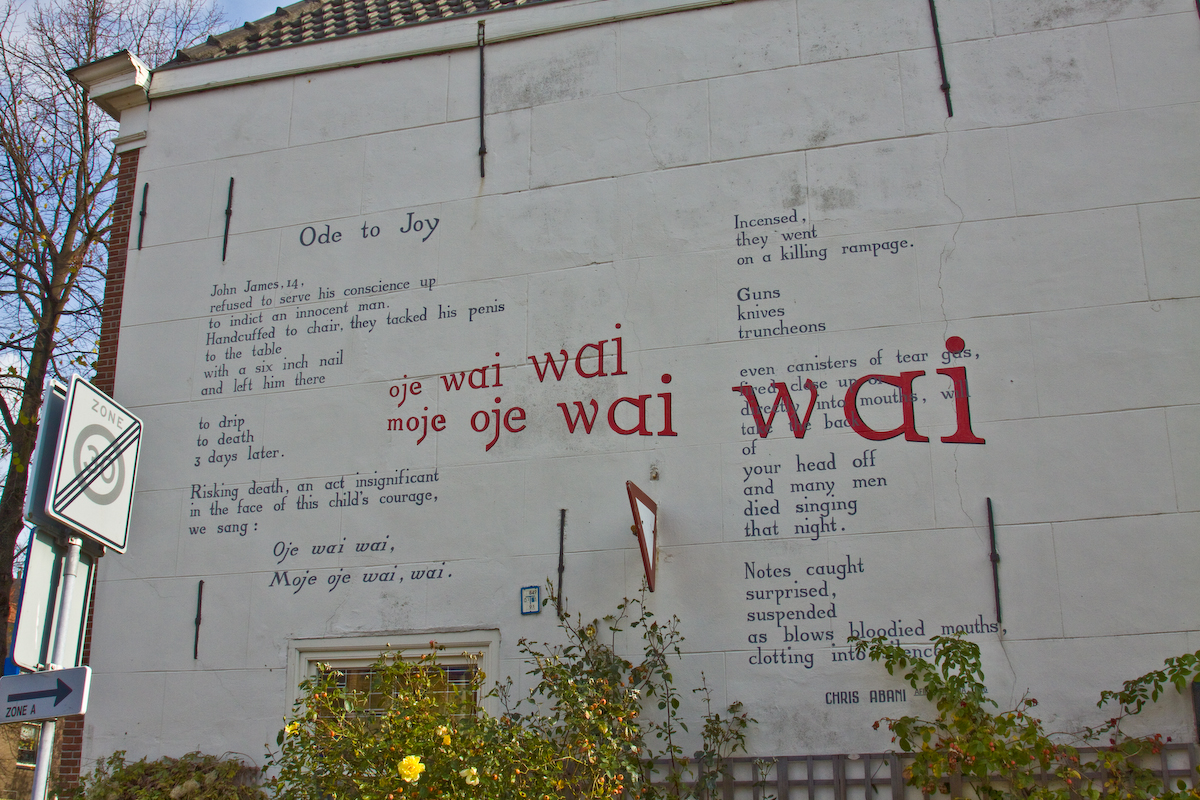 This poem can be found in Leiden since September 2004 and is located at Levendaal 81. The battle cry “Oje wai wai, Moje oje wai wai” has been painted over the poem in a big red font. The poem is chosen by Ben Walenkamp and Jan Willem Bruins and fits into one of the themes of the Leiden wall poems, namely: ‘Freedom fighters.’

When a war is over, it takes another 10 years for a war to be really over

These poems are the barest, the most harrowing expression of prison life and political torment one can ever imagine

Chris Abani might be the most courageous writer working right now. There is no subject matter he finds daunting, no challenge he fears. Aside from that, he's stunningly prolific and writes like an angel. If you want to get at the molten heart of contemporary fiction, Abani is the starting point.

John James, 14
Refused to serve his conscience up
to indict an innocent man
handcuffed to chair; they tacked his penis
to the table
with a six inch nail
and left him there

to drip
to death
3 days later

Risking death; an act insignificant
in the face of this child's courage
we sang:

Incensed
they went
on a killing rampage

even canisters of tear-gas,
fired close up or
directly into mouths, will
take the back
of your head off

and many men
died singing,
that night.

This entry is written by Het Taalmuseum in collaboration with Anne Wielenga. The translation into English is by Rianne Koene. The following publications were consulted: