What separates art from everyday life? Nothing, claimed C.B. Vaandrager. He used everything he heard, saw or read and used this to copy-paste his works together. This resulted in surprising, humorous and often alienating texts. Exemplary is this poem, for which he looked at the departure times of the intercity train Rotterdam - Amsterdam in the railway timetable.

C.B. Vaandrager grew up in the war-wrecked Rotterdam of the 1940s and 50s. The city was suffering from cultural anemia and lacked writers and publishers alike. This changed in the 1960s, when the literary scene in Rotterdam started to come back to life, a process in which Vaandrager played an important part.

The start of Vaandrager’s career was in journalism and advertising. In 1955, Vaandrager and his friend Hans Sleutelaar established the magazine Proefschrift, which only existed for a few years. The magazine Gard Sivik, which the duo initiated in 1957, proved more successful: it became the means of expression for a new generation of Rotterdam poets. These wanted a radical break with the poetry of the previous generation, the so-called Vijftigers. Not fiction, but reality was to be elevated to art status: everything was art, and everyone an artist. This new generation of avant-garde poets was called the Zestigers. Vaandrager was one of them.

Raconteur of the mundane

Vaandrager tried to put everyday life into words. Inspired by Duchamp’s ‘ready-mades,’ he incorporated mundane objects and unedited texts from adverts, receipts and railway schedules into his poetry. He was also known to write on beer coasters and sheets of toilet paper. Between 1960 and 1970, he established himself as an eccentric but successful writer and poet. However, there was a sharp edge to his literary fame. He suffered from depression, developed a drug habit and attempted suicide twice. He spent the final years of his life on the streets and died at age 56 of a neglected pneumonia.

Vaandrager received more praise post-mortem than when he was still alive. In 2002, Poetry International Festival was fully dedicated to his work and three years later the great tome that is his biography Vaan was released. His collected works were published in 2008, and 2017 saw the print of a commemorative poetry collection.

In this poem, C.B. Vaandrager presents a woman named Tanja with her choice of departure times for the train to Amsterdam. It is quite possible that Vaandrager literally copied the times from a railway schedule of NS (Dutch Railways). He often incorporated ready-made texts taken from adverts and other media in his works.

The line “Doe Amsterdam de groeten” (Give my regards to Amsterdam) can be taken as ironic. Being a true Rotterdam native in heart and soul, Vaandrager felt a natural contention with the city of Amsterdam. Yet, because the Dutch capital was regarded as the literary heart of the country, Vaandrager felt obligated to move there. But living in Amsterdam made him feel so miserable that he returned to Rotterdam less than a year later.

The closing line of the poem reads: “geen gesodemieter” (no messing around). Much like its contents, the language Vaandrager’s employs is mundane: the language of the streets.

The poem Nederlandse Spoorwegen (Dutch Railways) was published in the literary magazine Gard Sivik in 1962. Like almost all Vaandrager’s work, it was inspired by an everyday item. His most famous lines, for instance, “De kroketten in het restaurant / zijn aan de kleine kant” (The croquettes at the restaurant / could have been a little bigger) were conceived during a visit to the Dutch miniature park Madurodam in The Hague, where he was evidently disappointed by the food served at the restaurant. A railway schedule is thought to have inspired him in a similar way.

The portico of Morsweg 16 is adorned with a small wall poem: Dutch Railways by C.B. Vaandrager. Painted in mirrored letters but made legible by a mirror on the opposite wall. Passers-by can only really read it on their way home. The residents also commute to and from their work daily. She goes to Rotterdam and he to Amsterdam. The poem by Vaandrager seems to be a travel advice for his daughter Tanja, copied from the railway timetable that used to have the same colors as the wall poem. It warns Tanja to behave, because you never know, with those Amsterdammers. Especially when you’re from Rotterdam, as the Vaandragers were. But this advice must be fictional, because at that time Vaandrager didn’t have a daughter who could read or travel. Dick Bruijne has no time for such thoughts right now. He shuts his front door and walks to the station. The station is close by, and the train goes often enough. He only has to glance to the side to see when. Three times per hour and even more during the rush hour. Better get going. 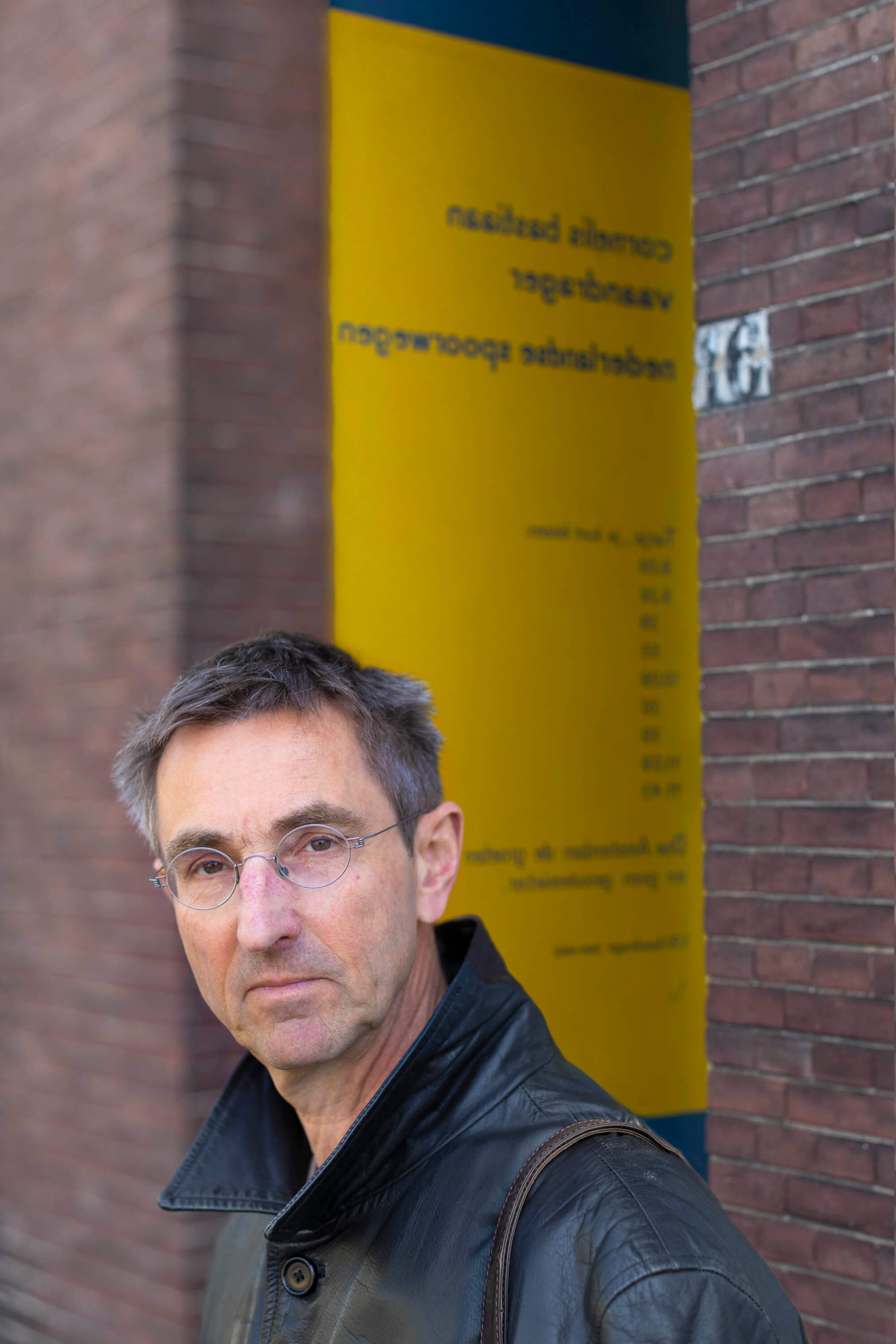 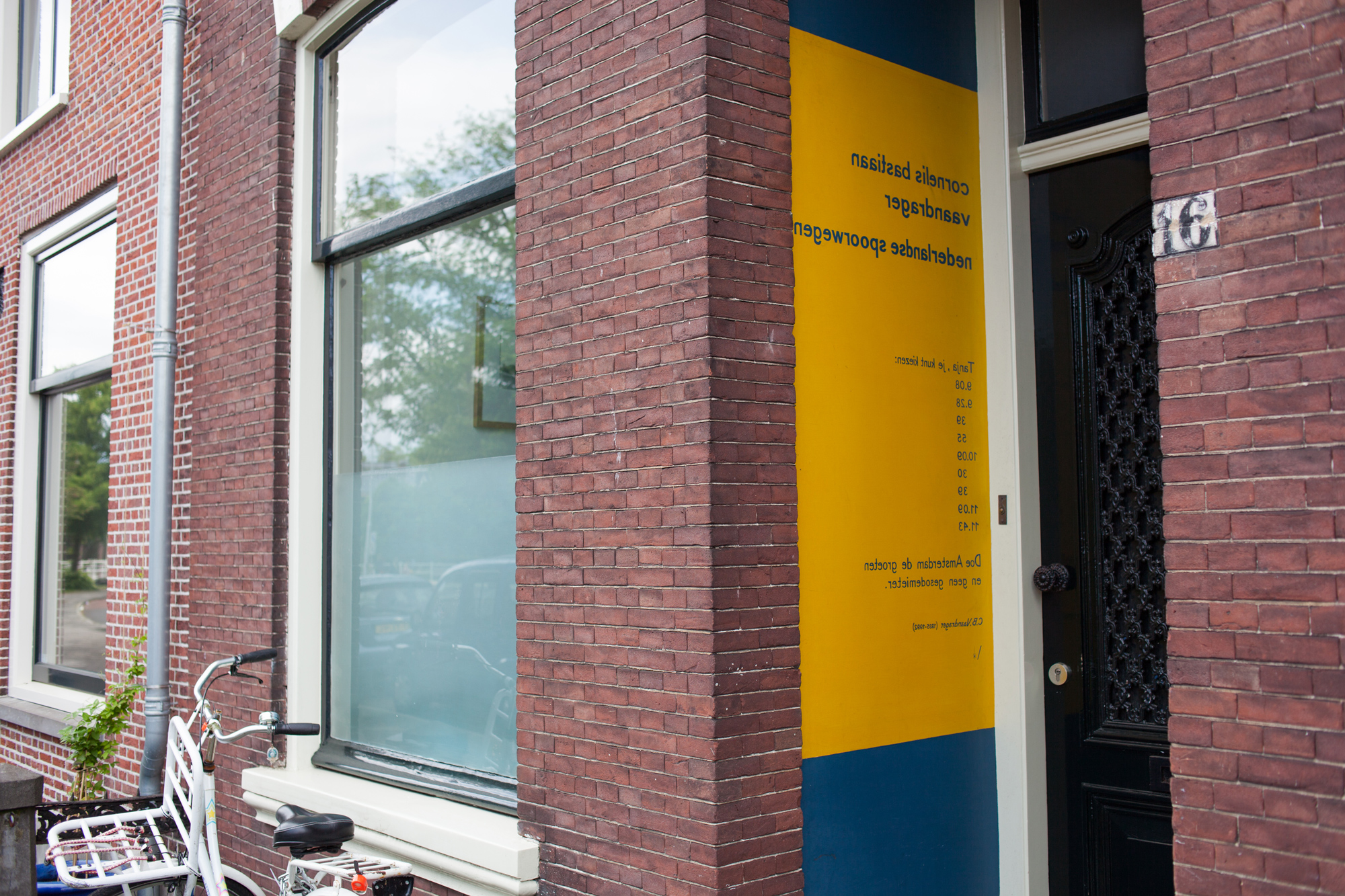 This poem adorns a portico at Morsweg 16, Leiden, since 2003. As the poem is half-hidden in the narrow entrance way, it required a special design. With a mirror, it is made visible for the people on the street - because of this, the writing on the wall is mirrored. People coming from the station may catch a glimpse of the real poem, while people going to the station get more of the mirror image. Some allow themselves to be distracted, and walk back for a closer look. The poem is painted in blue and yellow, the colors of the Dutch Railways (NS).

Vaandrager and the avant-garde

C.B. Vaandrager was one of the pioneers of the 1960s avant-garde. Together with artists such as Armando, Hans Verhagen and his friend Hans Sleutelaar, Vaandrager paved the way for new generations of poets with new literary views.

Vaandrager is also of significance to the city of Rotterdam, where he is regarded as a true cult hero. As a writer and poet, he put the city on the map. Vaandager also contributed to the revival of the cultural climate of the war-struck city.

Vaandrager’s belief in reality is so overwhelming that he himself succumbs to it.

He had bursts of success, but was often misunderstood.

Vaandrager “doesn't give a shit about poetry”.

I may be his biggest fan.

This is monumental, deboned poetry, anorexia on paper.

In Rotterdam he was someone, in Amsterdam one of many.

Give my regards to Amsterdam
and no messing around.

This entry was written by Het Taalmuseum in collaboration with Nikki Spoelstra. The translation into English is by Anne Oosthuizen. The following publications were consulted: