Jan Arends’s writing style reflects the way he felt: meager, hollow. In this poem, he wonders why his language is so stripped down. The answer might lie in his childhood. Would recognition have brought a richer life and thus a richer language? In any case, the language he possesses now is particularly fit for describing sorrow, pain and hollowness.

Jan Arends had been admitted to mental institutions and rehab multiple times. Many of his acquaintances have stated that his insanity was not that bad in real life, and he pretended to be mad precisely in order to be hospitalized. He had a need for the benevolence and social services in the clinics. It is possible that need stemmed from his childhood: he was a child born out of wedlock, was bullied by his classmates and grew up at a boarding school.

In between all those hospitalizations, he earned a living as a copywriter. This job often alternated with his career as a butler. When he worked as a butler in a Belgian castle, Arends wrote a play about his life in the copywriting world, called Smeer of de weldoener des vaderlands (‘Smear or the motherland’s benefactor’). He sprang to fame when his short story collection Keefman was published in 1972. Keefman, a book with clear autobiographical references, is about a man who is constantly clashing with his attending psychiatrists and the rest of the outside world.

In 1974, Arends committed suicide. He left behind a large number of unpublished poems, that have been released since then. The short story collection Ik had een strohoed en een wandelstok (‘I had a straw hat and a cane’) was also published posthumously. The interest in him has not ceased: in 2014, his complete works were published again. He has also become quite the literary cult figure. Moreover, Arends is a hero for supporters of the anti-psychiatry movement, who are of the opinion that psychiatric treatment is often more damaging than helpful.

‘I / write poems / like thin trees’, is this poem’s first sentence. The collection Lunchpauzegedichten (Lunch Break Poems) contains various trees. They symbolize language and poetry. These are meager and stripped down, exactly how Arends felt.

His language being meager stands for the hunger that he experiences in his life as a writer - not only the literal hunger caused by a lack of food, but also a feeling that can be described as a never-ending hollowness, a loneliness that cannot be tamed. At the same time, the meagerness allows him to define what language and poethood mean: ‘To write about pain you only need a few words.’ The pain is exactly the thing that is symbolized by his minimalistic style and clear phrasing. Language is something that does only harm, but also the thing that had to earn his daily bread. Bread that Arends did not want to eat.

A father figure is mentioned in the poem as well. It is known that Arends was born out of wedlock. His mother did get married later, presumably to his biological father. In this poem, Arends reproaches his father for being stingy with his seed - the seed that could have thickened the tree or even made it blossom. We can also read that the father figure is to blame for the meagerness of this poem. In other works, Arends keeps asking the same question of who is to blame.

Jan Arends probably wrote this poem between 1965, the year his first collection Gedichten (‘Poems’) was published, and 1974, as in that year, his collection Lunchpauzegedichten (Lunch Break Poems) was published, which included this poem. On the day the collection came out, Arends jumped out of the window of his apartment in Amsterdam. 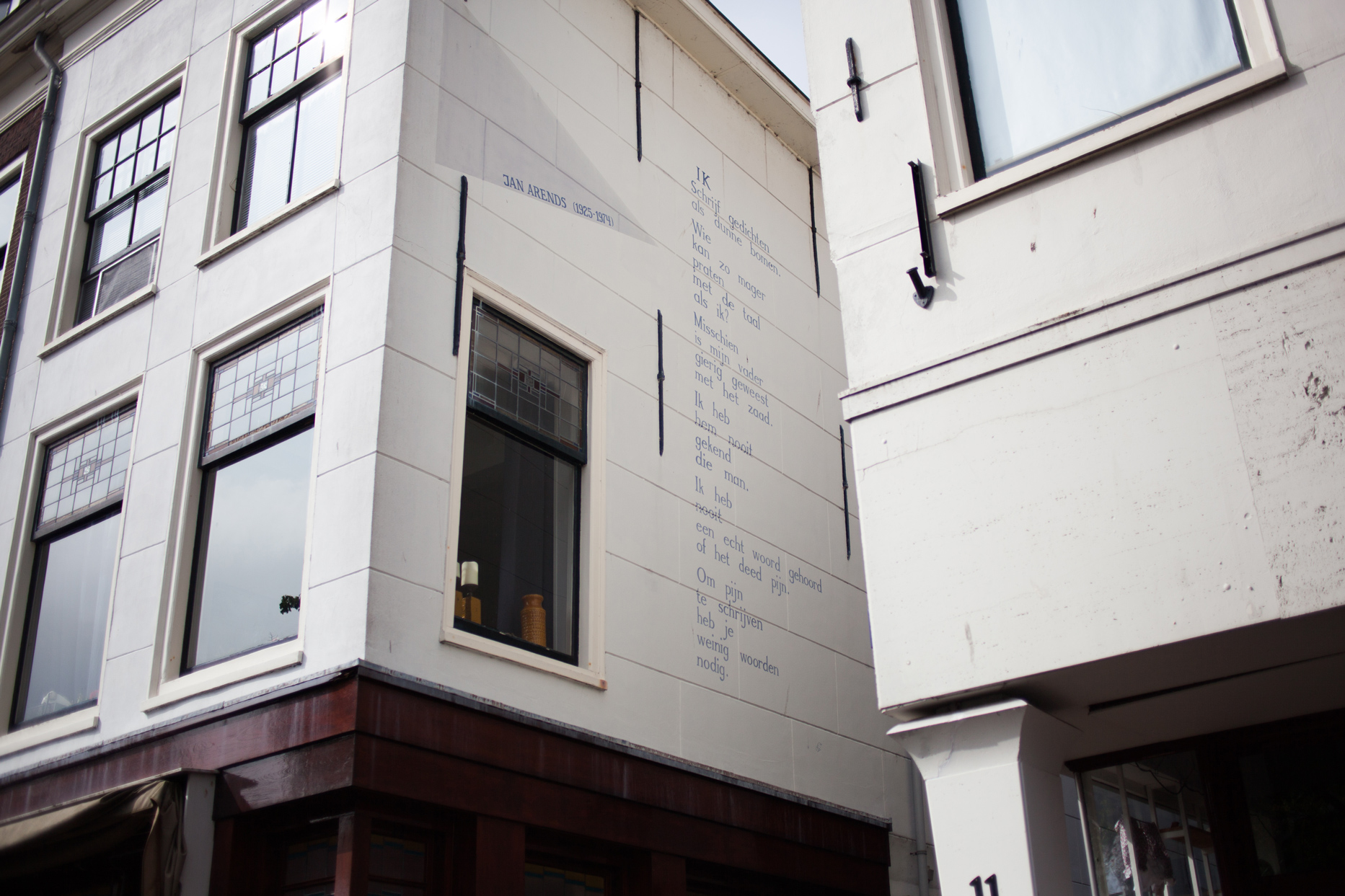 When in 1997 Leiden bookstore De Kler organized a contest for residents’ favorite poems on the walls of Leiden, Arends’s piece was sent in by T. Olijerhoek. It was his favorite poem from the collection Lunchpauzegedichten (Lunch Break Poems). It was painted in the Chloorlammersteeg, on the corner of the Botermarkt, in March 1998. At the time, the corner shop was occupied by Italian sandwich shop Michelangelo; the owner had preferred an Italian poem about coffee, but was pleased with this poem as well.

In 2005, the poem was removed, but four years later, it was repainted in the current design. Passers-by may not notice the poem at first glance, because the alleyway is almost as narrow as the poem itself.

Arends’s language is so unadornedly ordinary and direct that, just like the contents, it is utter reality. Utter misery. Exactly what Arends wanted.

Who
can speak so
meagrely
with language
as I do?

Maybe
my father
was stingy
with his seed.

I have
never
known him
that man.

I have
never
heard a real word
that didn’t cause pain.

To write
about pain
you only
need
a few words.

This entry was written by Het Taalmuseum in collaboration with Yavne van der Raaf. The translation into English is by Emma Knapper. The following sources were consulted: