Theo van Doesburg just had moved to Leiden in 1916. Here, he wrote several poems as he drew inspiration from Dadaism, the experimental art movement. As a poet, he wrote under the pseudonym of I.K. Bonset - an anagram of “ik ben sot” (I am mad). His poetry became a play between letters and sounds. Is there an underlying significance in this poem or is it merely wordplay?

Theo van Doesburg was born as Christian Küpper. When he was one year old, his father, a German photographer, went bankrupt and left his wife and seven children to fend for themselves. The family moved in with Theodorus Doesburg, a local watchmaker. The young Christian regarded him as a father figure and started using his name as a stage name.

Van Doesburg was already an established painter when he moved to Leiden in 1916. It is around this time that he discovered the work of Piet Mondrian, which inspired him to use straight lines and primary colors as well. A year later, he established the journal De Stijl, which would play an important role in the Dutch avant-garde art until 1931. In this journal, he published several poems.

Van Doesburg as a poet

In 1913 Van Doesburg published his first poem. Eventually, he had written about fifty mostly experimental poems when he stopped writing poetry in 1922. The majority of his poems were printed under the name of I.K. Bonset, the pseudonym he had been using since 1918. the name Bonset offered Van Doesburg the possibility to create playful work without having his befriended artists commenting on it.

According to I.K. Bonset (Theo van Doesburg), art had to ‘picture’ and not depict. In other words, a poem should not attempt to capture a feeling, thought or reality in words, it had to be art itself and appeal to something. He argued that poetry was not meant to be understood but was meant to be experienced. It is thus nearly impossible to concisely explain what this poem is about.

The following aspects are considered to be striking:

What does this poem mean to you? Please share your story.

In August 1914, at the start of World War I, Theo van Doesburg (I.K. Bonset) was mobilized and stationed near Tilburg. During this period, he wrote verses in which he experimented with typography for the first time. He continued experimenting until he was demobilized in 1916. Subsequently, he came in contact with several international artists and the Italian Marinetti told him about Dadaism, the art movement which was up and coming in Zürich. Van Doesburg immersed himself into the movement and wrote several Dadaist poems, including Lobelia I and II. The poems were not published until 1921 when he released a special edition of De Stijl dedicated to I.K. Bonset. In this ‘Anthology Bonset,’ he printed several verses he had written in previous years.

Does this poem hold a special place in your heart? For example, do you remember when you first read the poem? Or did you come across it someplace unexpected? Let us know at muurgedichten@taalmuseum.nl. We would love to add your story to our website. 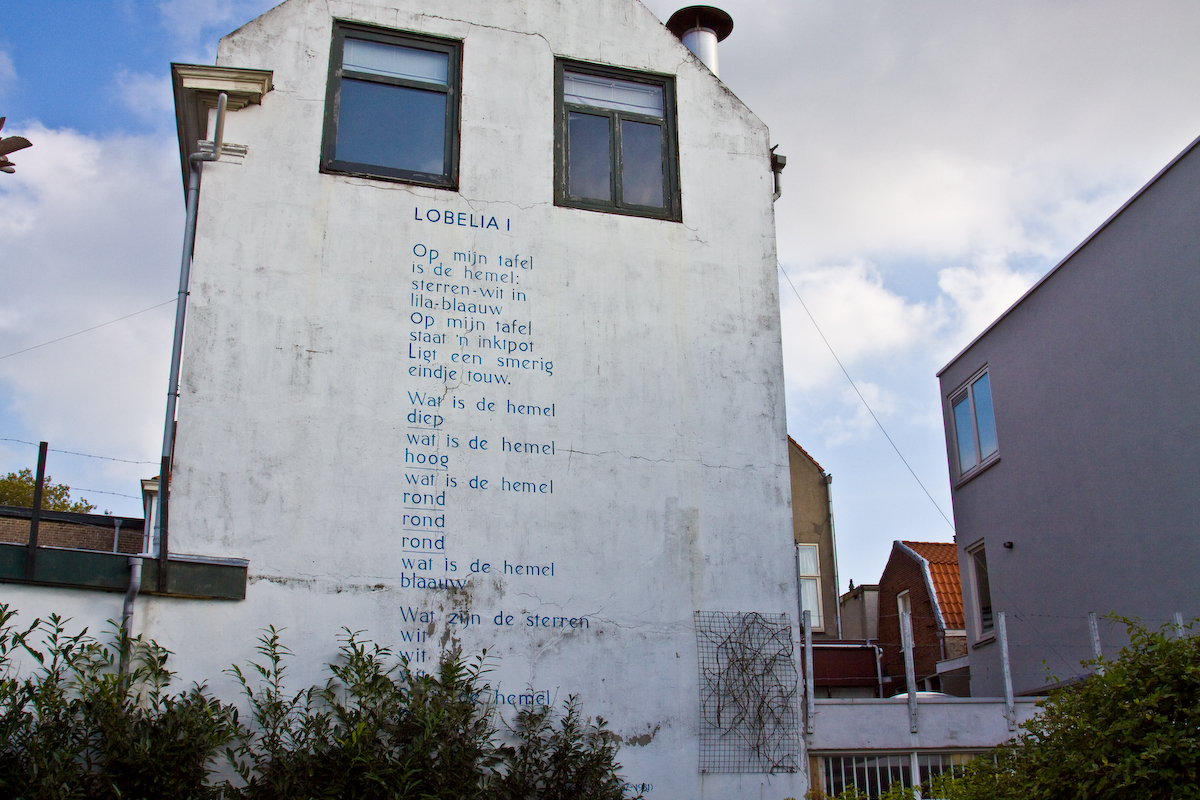 In 1916, when Van Doesburg was 33 years old, he moved to Leiden, where as a poet he chose the pseudonym of I.K Bonset. He relocated to Leiden for his beloved Lena Milius. The couple married the following year. Van Doesburg owned a studio at Kort Galgewater 3, until he left for Germany in 1921. Van Doesburg’s most important achievement during his time in Leiden was, without doubt, the release of the journal De Stijl in 1917. In a short period of time, De Stijl blossomed into the favorite journal of everyone who was involved in the Dutch modern art scene.

In 1992, in order pay tribute to Theo van Doesburg and celebrate the 75th anniversary of De Stijl, Ben Walenkamp and Jan Willem Bruins wanted to paint twenty of I.K. Bonset’s poems throughout the city of Leiden. Instead, they realized the De Stijl-logo near Van Doesburg’s studio and former home in the pavement.

The poem Lobelia I can be found on the wall of the Lucas van Leydenschool. Underneath the poem, there are 23 translations to enjoy, made by the pupils and their parents.

Understanding art has always been impossible… Poetry doesn’t allow for it to be understood, it moves.

This entry was written by Het Taalmuseum in collaboration with Chris Flinterman. The translation into English is by Demi van de Wetering. The following publications were consulted: