Listen to this poem in Catalan.
Voiced by: Gisel·la Soler

In 1931 he already published his first novel El Doctor Rip ‘Doctor Rip’. Before he graduated from University he had already published four narratives: Aspectes ‘Aspects’ (1934 ), Laia, (1934), Miratge a Citerea ‘Mirage in Citerea’, illustrated by Grau Sala (1935) and Ariadna al laberint grotesc, ‘Ariadna in the grotesque labyrinth’ (1935) . And that was just while he was studying in University! He studied Law (1935) and Ancient History (1936) in Universitat de Barcelona, which, founded in 1450, was the only university in Barcelona until 1990. There he would meet his lifetime friend, the also poet Bartomeu Rosselló-Pòrcel.

He lived during relevant events for the History of Europe and Spain, and Catalonia of course. In short, he was born shortly before the spark of First World War took place (1914-1918). He lived during the one-year-long Catalan Republic in 1932-1933. After he first graduated, there was the outbreak of the Spanish Civil War in 1936. As a consequence, he had to work in his father’s notary office, where he stayed once the father passed away. In Spain, and during Franco’s dictatorship, Espriu wrote about the fracture in the society in several of his poems, and his perception of doom. He also lived to see the death of the Dictator in 1975.

His work and awards

Although he didn’t like working as a lawyer, this allowed him to keep reading and writing. His literature is cyclic, meaning that he returns to topics he already touched upon in his early novels, like a recurrent dream, or a daunting gloomy smear. For example, after Ariadna al laberint grotesc (1934), in 1956 he was awarded the Lletra d’Or (Golden Letter Award) for his novel Final del Laberint ‘End of the Labyrinth’. His topics revolve around biblical or historical scenes, sometimes with cinism, satire, and even cabalistic reminiscences.

He won several literary awards. He received the International Montaigne Prize by the Universität of Tübingen in 1971. He received the highest award for a Catalan writer, Premi d'Honor de les Lletres Catalanes, in 1972 for his career. His fiction Les roques i el mar, el blau (1981) ‘The rocks and the sea, the blue one’ received two awards in 1982: Crítica Serra D’Or and Ciutat de Barcelona . In the same year, he rejected the Cruz de Alfonso X el Sabio, awarded by the Spanish Government.

The theme of the poem is the meditation about death, a recurrent element theme in the poet’s work. In his early years, Espriu had to overcome the death of two siblings, one of his best friends and poet Bartomeu Rosselló-Pòrcel, and relatives and acquaintances that were killed during the Civil War. It is a painful reflection about all the things he is and he loves, that will end up forgotten when he also dies. Although the topic is quite recurrent in the poet’s work, this poem is not one of the most representative.

The poem is composed of 9 verses without a rhyme. Almost all of them have 10 syllables, except for the first and the last verses.

Espriu opens the poem wondering about where rain comes from, which is nowhere. The reflection about the rain leads him to a lonely mood, to solitude, where silence happens at the same time with punching noise, which could be a metaphor of painful thoughts, as he writes with his words “this noisy silence of darts”. Some academics have written about the concept of “rain” in Espriu’s poetry, arguing that it refers to Bartomeu Rosselló-Pòrcel, his friend, transformed into a rhetoric symbol that would be present from then on in his literary work.

When he is in his solitude mindset, three concepts appear as a symbol of his happiest memories, namely the spring, luxury and light; which are now gone forever, as we can read in “lost in the defeated path”. Because of the Civil War, there is no room for bliss and joy for the losers, there is no hope or peace for his country, Catalunya. Emptiness is everywhere, in society, in himself. There is only perfect emptiness as it rains, a rain that comes from nowhere and goes nowhere else.

This poem can be found in the book Les hores, written in 1952, when Espriu was 39 years old. This book is, in most editions, part of Cementiri de Sinera, a compilation of poems written earlier, in 1946. The two compilations together constitute a complete view of his reflections about certain topics.

The poet writes surrounded by the beautiful landscape of the cemetery in his beloved town Arenys de Mar, where the happiest memories of his life took place. Suspended between the sky and the sea, he enters in deep and painful reflections about death, God, solitude, and the blissful times that will never come back, that have been lost because of personal and social wreckage caused by the Civil War. Those are the themes that will keep on appearing in later works of the author. 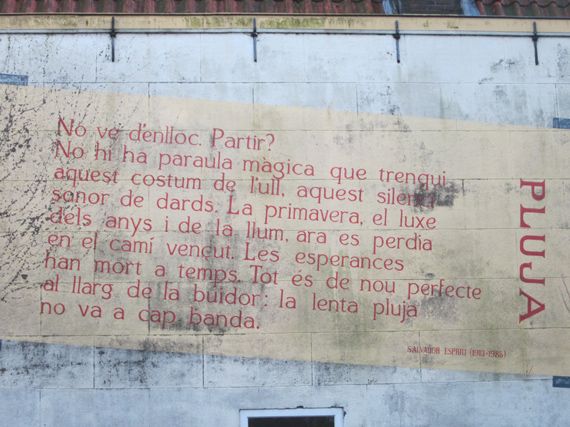 What definitely brings Espriu and Leiden together is their struggle to get rid of the Spanish ruleship. His poems often called for building bridges of peace and comprehension, which he wished for. The Netherlands, or the Union of the Seven Provinces at the time, did not want to live under the catholic restrictions imposed by the Spanish Ruling. Although the Netherlands managed to achieve independence, Catalonia has still an open future to write.

Espriu always fought and defended the dialogue between the Spanish and the Catalan community, especially after the misery times of the post-war where there was a huge rivalry between the two. Thus, in his poetry, and more specifically in his most important poetry anthology La pell de brau (1960) “The skin of the bull”, we can read his will for reconciliation and acceptance for a plural, multicultural and multilinguistic nation, a point of view which was not majoritary in Spain, and is still not.

The skin of the bull

Sometimes it is necessary and forceful
that one man dies for a whole community,
but never should a whole community die
for the sake of one man:
always remember this, Sepharad.
Ensure that the bridges of dialogue are safe
and try to understand and love
the reasons and diverses ways of speaking of your children.

Let the rain fall slowly over the swon fields
and let the air pass through like an outstretched hand
smooth and very benigne over the open fields.

May Sepharad live eternally
orderly and peacefully, in the work,
in the difficult and deserved
freedom.

In El Caminant i el Mur, “the Wayfarer and the Wall”, the narrative voice complains that he wants to leave his arid barren land and go up north, where people are more noble, rich, cult and free. But he decides to stay, acknowledging his cowardness, because, like the land, he is also coward and sauvage. And because he loves, although with a desperate ache, this poor, dirty, sad, unfortunate homeland of his, “Aquesta meva pobra, bruta, trista, dissortada pàtria”. This words resonate still, maybe recently more than lately, in the collective memory of many Catalans.

It comes from nowhere. Leave?
There's no magic word that can break
this monotone, the staring, the sonorous silence
like that of arrows. The spring, and the abundance
of years and of light, lie lost
on the road behead. The expectations died away
completely in the end. Once again everything is utterly
in a vacuum: the slow rain
is going nowhere.

This entry was written by Helena Ros i Redon and Gisel·la Soler i Bertolin. The following publications were consulted: