Listen to this poem in Greek.
Voiced by: Athina Kyrizaki

My words and poems do not tell who I am, because I was never able to speak freely, Constantine Cavafy states in this poem. What did he try to hide that he hoped would be accepted in different times? He was probably alluding to his own homosexuality. In Egypt, in the early twentieth century, Cavafy didn’t feel comfortable enough to be honest about it; this poem was published posthumously.

Konstantínos Kaváfis (in the English speaking world he was known as Constantine Cavafy) was born in Egypt to Greek parents from Constantinople (Istanbul). The family had an international orientation; his father was an importer-exporter and during his youth Cavafy lived shortly in both Constantinople and Liverpool. Back in Alexandria, he worked as a journalist before taking a position with the Egyptian Ministry of Public Works for thirty years.

Starting in 1891, Cavafy published a total of 154 poems in a mixture of Katharevousa and Demotic Greek. Most of these poems could be read in the newspapers. Sometimes he presented friends with a poem. Although he gathered some fame in Greece, he remained an outsider to the literary scene. Not only because he lived in Egypt, but also because his work did not conform in the slightest to the literary trends of that period. Cavafy often wrote short, personal narratives about historical or literary figures of Greek culture. His most famous poem Ithaca (1911) retells the journey of Odysseus.

Cavafy was a perfectionist and often kept refining his work for years. His poems are technically well put-together. They are lively, since Cavafy practically only used rhyme when he implied irony and used free verse elsewhere. He also applied this technique in his personal poems, in which themes such as sexuality, morality, homosexuality and nostalgia frequently occur. These ‘hidden poems’ were only published two years after his death. Ever since, the appreciation for his work has increased.

In this poem, Cavafy owns up to who he truly is. Not the person who people believe him to be if they read his narratives and verses. He carries a secret deep within that doesn’t allow him to show his true self. Perhaps, he hopes, the distant future will allow freedom to express your true nature, but he seems to have accepted that his secret does not fall within the norm.

Nowhere in this poem is the secret mentioned out loud. Around 1900, it was more common to speak about the ‘unnamable’ act or sin than about homosexuality. Cavafy wasn’t alone; his brother was openly gay. Cavafy thus knew well how limited social acceptance was. Increasingly so. In many countries (including the Netherlands) from the end of the nineteenth century onward, laws were adopted which made homosexuality liable to punishment.

That Cavafy does not name his secret is telling. The poem is not about homosexuality but about what it means when you cannot be yourself since society does not accept you. Therefore, the poem is regarded as both personal and universal. It also offers hope: what is not accepted at this moment in time, can be regarded as perfectly normal in the future.

In 1908, Cavafy was already 45 years old when he went to live on his own. Previously, he had shared a house with his brothers. This proved to be a turning point in his life. Poetry now received his undivided attention. The poems he wrote from this moment onward are considered to be his best and most mature work. Krimmena was put to paper in 1908, but was only found in his archive after his passing. It was suitable, since its title means as much as ‘hidden’ or ‘secret’ in Greek. 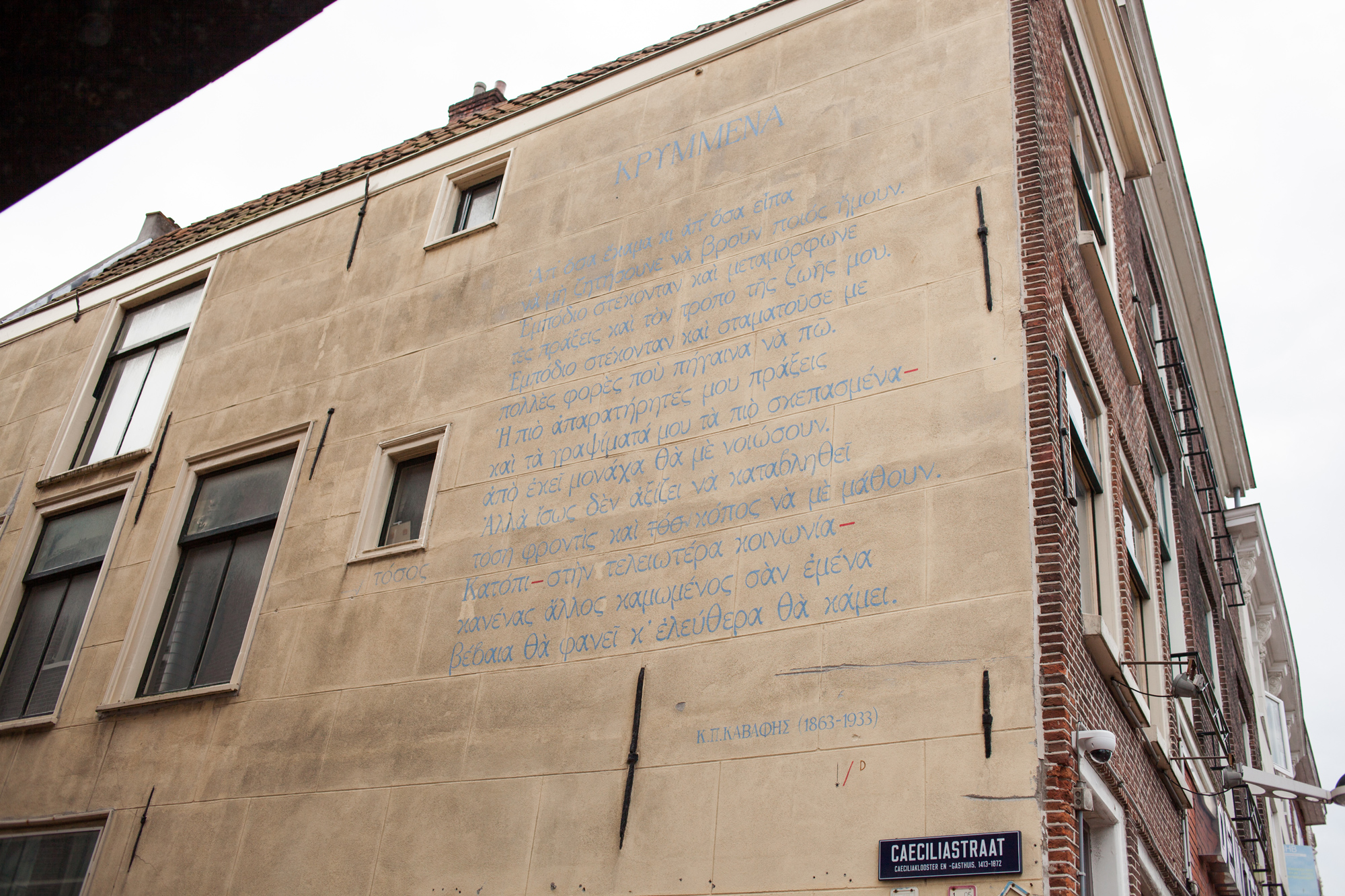 Since 1994, this wall poem can be found on Turfmarkt, on the corner of Caeciliastraat. In 2003, the TEGEN-BEELD Foundation organized a night of poetry surrounding Cavafy. On a summer night, several Dutch writers, booksellers, students, musicians and other enthusiasts from Leiden recited all his 154 published poems. In honor of this occasion a booklet on Cavafy was published.

I am from Constantinople by descent, but I was born in Alexandria [...] I left very young, and spent much of my childhood in England. Subsequently I visited this country as an adult, but for a short period of time. I have also lived in France. During my adolescence I lived over two years in Constantinople. [...] I know English, French, and a little Italian.

A biographical note written by Cavafy

From all I did and all I said
let no one try to find out who I was.
An obstacle was there that changed the pattern
of my actions and the manner of my life.
An obstacle was often there
to stop me when I’d begin to speak.
From my most unnoticed actions,
my most veiled writing—
from these alone will I be understood.
But maybe it isn’t worth so much concern,
so much effort to discover who I really am.
Later, in a more perfect society,
someone else made just like me
is certain to appear and act freely.

This entry was written by Het Taalmuseum in collaboration with Kyrizaki Athina. The translation into English is by Demi van de Wetering. The following publications were consulted: