Is Latvian your mother tongue and would you like to recite this poem? Please contact us at muurgedichten@taalmuseum.nl!

How can you let your voice be heard in an oppressive political system? In Soviet Latvia, poetry could be very political. Like in this poem, in which Nora Kalna wonders why the Baltic Sea can enjoy so many liberties that the people have to miss.

Nora Kalna grew up in the Courland region, along the Baltic Sea. In 1963, she went to Liepāja to study journalism and her first poems were published in the newspaper. Three years later, she graduated and started to work for newspapers, publishers and the Latvian radio. She also translated Russian and Turkmen poetry. Since 1971, she has lived in Riga.

In 1968, when Kalna wrote the poem, many Western European countries witnessed clashes between youth and authority. In Eastern Europe too, a new generation wanted to be heard. They were dissatisfied with the Russian dominance and the lack of freedom. In the Czech Republic, it came to a head with an actual uprising, the Prague Spring, which was crushed with much bloodshed. In Latvia, the matters did not get so heated, but intellectuals did seek ways to make their voice heard as well. Kalna was one of them.

Besides poems, Kalna wrote various books, translations and travel novels, and wrote for magazines. Relationships are a recurring theme in her work.

This poem, published in 1968 when Latvia was still under strong Russian influence, is about freedom. The poet wonders why the sea is allowed to be itself while the people are not. It is provocative, also because of the strict rules for poetry-writing that were enforced in Soviet Latvia. Some words were prohibited and only specific words were allowed to rhyme with ‘Stalin’ or ‘Lenin’. The description of nature was not allowed to take up more than one fourth of the poem. Poetry was a political matter.

The title, Jūrai, is Latvian for Baltic Sea. The sea can do whatever it wants: destroy ships, flood the land, sow algae, storm, release awe-inspiring forces to nature - the sea has to account for nothing. It is something to envy, especially when you experience so many restrictions yourself.

In 1940, during the Second World War, Russian troops occupied Latvia. The country became part of the Soviet Union that same year. The new rulers implemented a policy of russification: stimulation of Russian at the expense of Latvian. After Joseph Stalin’s death in 1953, it seemed that there would be more space for dissenting voices and the Latvian culture, but unfortunately that wasn’t the case. Younger generations in the 1960s sought ways to express their discontent. Among this group was Nora Kalna, who graduated in journalism in 1966. Two years later, her first collection was published, including this poem.

Theater maker Erik Siebel interviewed house owners and people involved about the Leiden wall poems. Listen to the interview with Hein van Woerden here, involved with the development of the wall poem on behalf of the municipality: ‘Rarely have I welcomed someone’s death as much…’

Well, my memories of the realization of the poem Jūrai at the building at the corner of Rapenburg and Scheepmakerssteeg - yes, I have some very fond memories of that. Very special indeed.

At a certain moment in 2004, the mayor of Leiden was visited by the ambassador of Latvia, madam Baiba Braže. She was married to a Dutchman and she had visited Leiden a few times, and was very impressed by the wall poems of the TEGEN-BEELD Foundation. But she had come for a reason: a state visit was being prepared for the president of Latvia, madam Vaira Vīķe-Freiberga. That would be the very first state visit to the Netherlands by a Latvian president. At that moment, Latvia had only just crawled out from under the Russians’ yoke. That state visit would include a visit to Leiden too, where she would deliver a nice speech at the university. But the ambassador thought it was a very good idea to also get a Latvian poem painted on the wall which would be unveiled by the president during that visit. Well, that was then discussed with the mayor, and he also thought it was a nice idea. I was present at that conversation and he therefore asked me to contact the TEGEN-BEELD Foundation, which I did. And I immediately saw all kinds of Latvian trouble ahead, to phrase it like that. TEGEN-BEELD’s project, called Gedichten op Muren (‘Poems on Walls’), would include 101 poems and they were all given away already. Around 99 poems were already painted, one had already been given away, and number 101 was a kind of grand finale, reserved for a poem that would be made and painted on a wall by the TEGEN-BEELD Foundation’s own people. And besides, they already looked into Latvian poetry, but they had found nothing of a special quality. So the answer was no.

However, ambassador Baiba, a rather ravishing red-headed diplomat, illustrious among the diplomatic crowd, did not accept that at all. It was rumored that she was after a post in London or Washington, and a wall poem in Leiden unveiled by the president herself would be very helpful for that. She just would not listen to us trying to tell her that the municipality did not commission the poems, but that the TEGEN-BEELD Foundation was responsible for selecting the poems and their locations. Well, a solution was direly needed. TEGEN-BEELD was willing to help paint a poem, but only somewhere in a garden or a building, so: not visible from the street. But Baiba persisted in her desire to make the poem publicly available, visible from the street. Many solutions, make-do solutions and no solutions followed, we were running out of time. And eventually we ended up at the university. And, groaning and moaning, the university was found ready to allow a Latvian poem in the hall of the Observatory (Sterrewacht). TEGEN-BEELD was willing to paint the poem. Very relieved, I called up Baiba the ambassador and cheerfully informed her of the beautiful spot we found. You would not believe it, but within thirty minutes she was at my door in Leiden. It was dramatic. The Observatory still had to be renovated and the hall was an incredible mess. Paint was peeling off the wall, the hall was littered with bikes and rubbish, it was one big mess. Looking at that, Baiba said: nē! In translation, that means: no. The poem would not be visible from the public space, and that mess was no place to receive a president! And no matter how much we kept repeating that the Observatory would be accessible to the public after the renovation, she would not give in. But that state visit was only coming closer. There were only three weeks left. Top-level talks were held between the municipality of Leiden and the university, and with TEGEN-BEELD too of course, and they still did not want to give away a spot in their project. Even the Ministry of Foreign Affairs was stepping in. We were hitting a wall - a nice expression in this context of wall poems. Only two and a half weeks were left, and the ambassador could forget about London or Washington.

Then I had to think of the following little fact - later, by the way -: Johann Sebastian Bach once wrote a beautiful song: ‘Komm, süßer Tod’. And now, the sweet death came out of thin air like a deus ex machina, because two weeks ahead of the state visit, our princess Juliana passed away. That was on 20 March 2004. It is by all means very inappropriate, but rarely have I welcomed someone’s death as much as that of our beloved Juliana. The state visit was canceled. Some room to breathe and discuss everything again with all those involved. In the meantime, TEGEN-BEELD had discovered the poet Nora Kalna and found one or her poems to be of a very high quality. And in the end, it was proposed to put that poem on a public wall, visible from the street. Everybody happy. And when the postponed state visit did take place, the president of Latvia held a nice speech in the university’s Great Auditorium on 18 January 2008. Together with Queen Beatrix, she then walked over the Rapenburg to the corner of the Scheepmakerssteeg. The president unveiled the placard with the translation and recited the poem. All's well that ends well, because ambassador Baiba Braže was appointed ambassador in London in 2016! And in an interview she declared that the first thing she saw of the United Kingdom when she arrived there by boat, were the White Cliffs of Dover.

And she promptly thought: would be a nice spot for a wall poem. 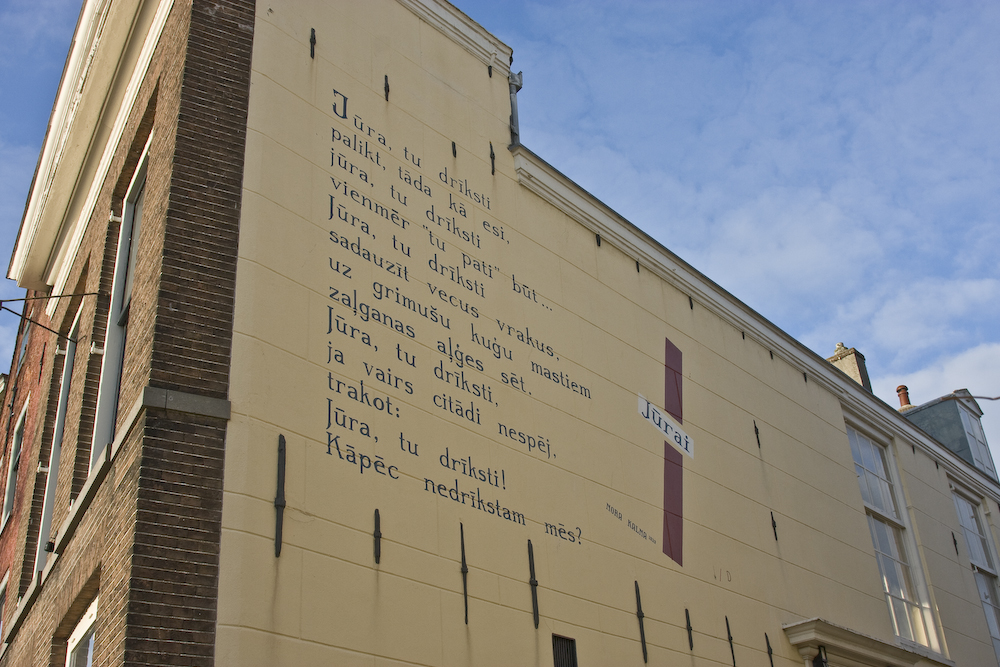 On 18 and 19 January 2005, Leiden received an important visitor: for the first time ever, a Latvian head of state would go on a state visit to the Netherlands. This was also the moment the 99th wall poem, a Latvian poem, could be unveiled. None other than the Latvian president, Vaira Vīķe-Freiberga, did so by removing the flag of Leiden from before the wall poem. Queen Beatrix, mayor of Leiden Henri Lenferink and state secretary Mark Rutte attended this event as well. The wall poem can be found at Scheepmakerssteeg 2.

The Latvian language belongs to the Baltic branch of the Indo-European language family and has been heavily influenced by German. What immediately catches the eye is the use of lines above vowels, which indicate length or intonation. Because of that, Latvian is a pitch accent language: a different intonation of a syllable changes the meaning of a word. Latvian also uses the cedilla (the squiggle beneath certain letters) for the G, K, L and N. This indicates that a ‘j’ should be pronounced after the consonant. Those who look closely will also discover that Latvian does not use articles.

Latvia is like a bottle of champagne which has been kept for a long time — seven centuries, after all! — in a dark cellar and suddenly opened by the careless Time. Much of its bubbling contents have been spilt in the ceiling and on the floor, yet there is still enough left in the bottle for us to get tipsy, for the wine is old and good.

This entry was written by Het Taalmuseum in collaboration with Anne Wielenga. The translation into English is by Emma Knapper. The following sources were consulted: